Yesterday, after successfully achieving the two goals for our road trip, we left Prince Edward Island and drove back as far as Miramichi, New Brunswick; where we spent the night.  Today we decided to take the inland route across the province to Grand Falls, which is almost at the border with Maine, USA’ and then head north into Québec and Rivière-du-Loup.

Miramichi is located at the end of a wide inlet on the Northumberland Strait between New Brunswick and PEI.  The distance across the middle of New Brunswick between the two cities is just under 213 km (132 miles) – a very short distance compared to crossing British Columbia which is over 800 km (497 miles) to the Alberta border from Vancouver.

This nice mural was on a building beside the gas station as we fueled up in Miramichi.

Almost the entire day was spent on quiet roads with little traffic and very few stops.  Even most of the geocaches we were hoping to find were buried under snow and out of reach.  We did find 6 caches, but had to clamber through snow to get everyone of them.

We drove past this little semi-frozen river and John was kind enough to back up so I could get a photo of it.

On the down-side of the bridge the water was covered in snow and ice.  I liked the patterns right below the bridge. 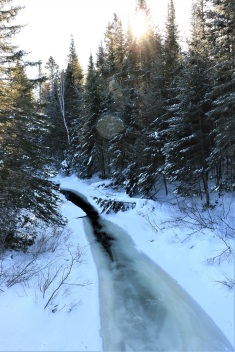 Above and below the bridge over the Dungarvon River.  There is a harrowing tale in this area about The Whooper, a lumber-worker’s cook who was murdered near this river and roams the forests at night making a loud whooping, yelling noise.  The story may be a way for parents to try scare their children from going into the deep, dense forests, or….you may consider yourself warned from venturing alone along the Dungarvon River.  Beware The Whooper.

The sawmill community of Plaster Rock is on the west side of the Tobique River.  Hezekiah Day gave Plaster Rock its name based on the hill on the other side of the river – the rock is made up of gypsum, or plaster.  Plaster Rock hosts the World Pond Hockey Tournament every year.  They section off rinks on a very large local pond and teams come from all over the world to play.  There are teams from Jamaica, Egypt, Germany, and many other places around the globe.  A fund raiser for the tournament is a calendar featuring photos from the previous year’s games and teams.  We had lunch at a small cafe in Plaster Rock and then continued the 30 km to Grand Falls where we turned north on Highway 120, which turned into 289 when we crossed the border into Québec.

We arrived at Rivière-du-Loup at 4:30 but it was now only 3:30 because we crossed a time zone between New Brunswick and Québec.  This gave us some down time to check email and Facebook before heading out for dinner.

Tomorrow we travel from Rivière-du-Loup to Trois-Rivières. We will travel the coastal route 132 as far as Québec and then cross the St. Lawrence River and drive along the north side to Trois-Rivières.  After that, it is another driving day back to Ottawa.