I woke at 8 feeling myself again.  Thank goodness. We had a long driving day ahead – 7 hours of just driving time, so I didn’t want to feel ill the whole time.

We load lists of geocaches on our phones when we have wi-fi and then the information is available as off-line data when we are out in the boonies.  There was a cache hidden at a veterans cemetery for members of the local Native community off in the woods at Northway.  It was only a short drive off the highway so we decided to go find it.

What a great place.  Each of the graves was so colourful and so beautifully decorated.  Obviously family members come up often to pay their respects and bring along some flowers or other decorations. 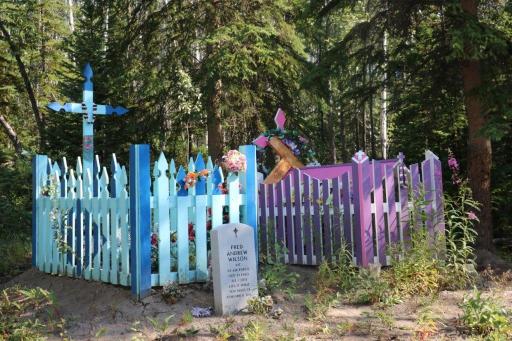 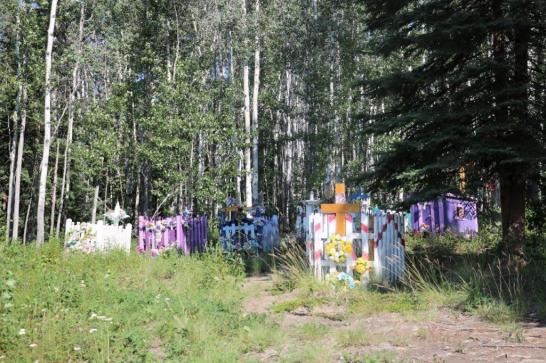 (Now, remember yesterday when my camera changed from colour to black and white?  Well, it did it again today.  The last photo I took at the cemetery was black and white and all the pictures I took the rest of the day were also black and white.  I rarely check my images as I take them so I did not notice the change in picture style until we were almost at Whitehorse.  So, all of the colour photos in this blog except the some of the ones at the cemetery and the last one in the blog are John’s pictures.  I will insert some of by black and white ones in as well.  So very strange.  You must make three separate menu selections to change the picture style.  I have no idea how it happened.  Twice. You can be sure I will be checking the display of my photos more often from now on.) 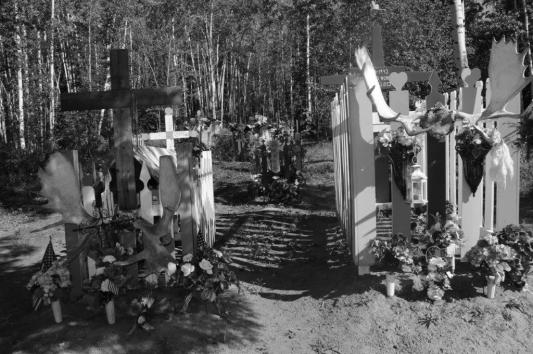 We stopped next at the Tetlin National Wildlife Refuge. 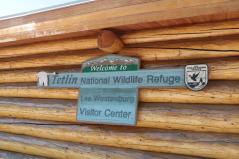 There was a pretty nice view from the balcony. 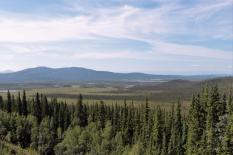 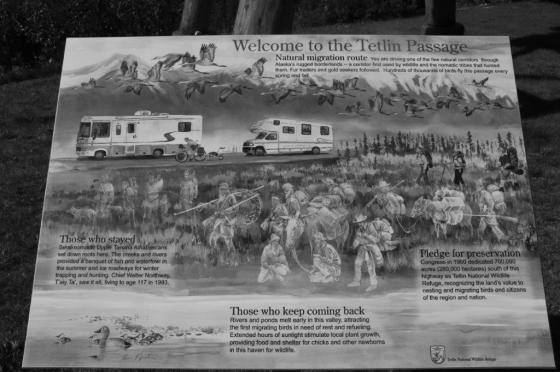 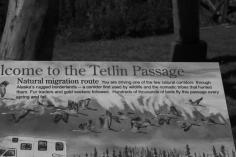 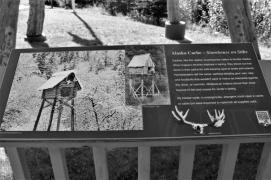 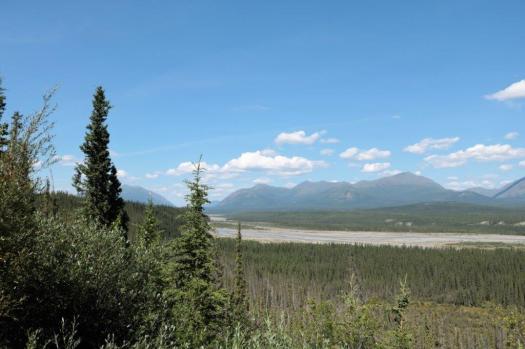 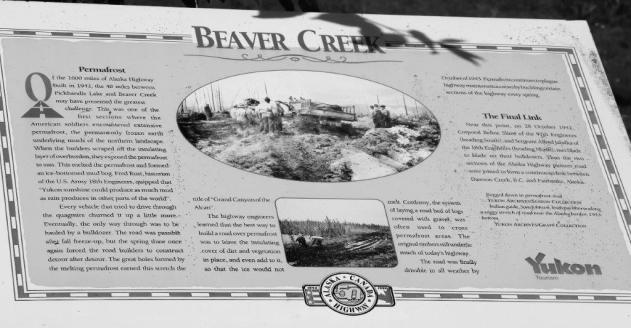 At Soldier’s Summit we walked the trail up to the place of the official ribbon cutting when the Alaska Highway opened in 1943. 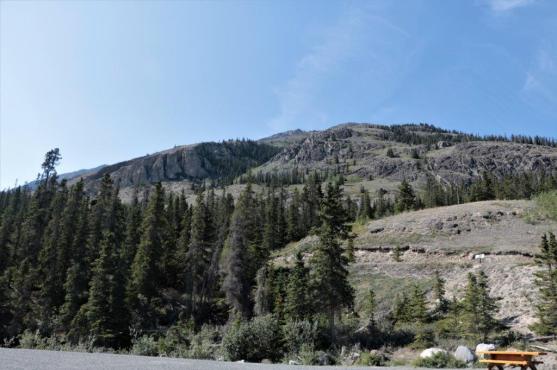 There were gorgeous views of Kluane (Klu-AH-nee) Lake

In 2016 the first case of River Piracy witness by mankind in a geologic instant took place at Kluane Lake.  River Piracy is the diversion of the headwaters of one stream into another.  This can have significant effect on the landscape.  These changes are usually measured over time – quaternary or longer timescales.  But, here the glacier feeding the Slims River and the lake had an event that altered abruptly and radically in the spring of 2016.

The piracy of Slims River has important downstream implications.  The level of Kluane Lake has fallen and may fall further, potentially below its outlet at the north end of the lake.  If this happens, Kluane Lake will become a closed basin.  Also, the lake usually received large amounts of glacial sediment making the water the lovely turquoise colour.  This sediment flow is now cut off and how this will affect the life in the waters of the lake is uncertain.  Certainly the colour was just a regular pale blue when we were there.  There are other, long-winded geologically-potential affects as well.  What was obvious to us was that much of the lake bed is now dry and is even beginning to grow plants. 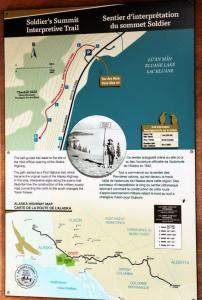 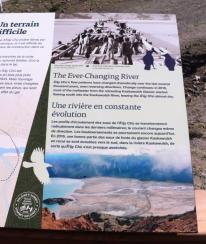 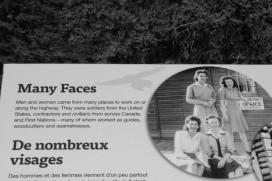 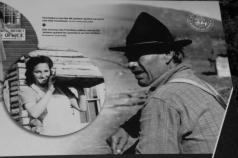 It seems up north you can’t escape information about the gold rush or the building of the Alaska Highway.

There were two of the nice red Parks Canada chairs at the top.  I have made a point since our drive across Canada in 2014 of having my photo taken in any National Parks chairs we come across.

John used my camera to take the photo so it is in black and white. 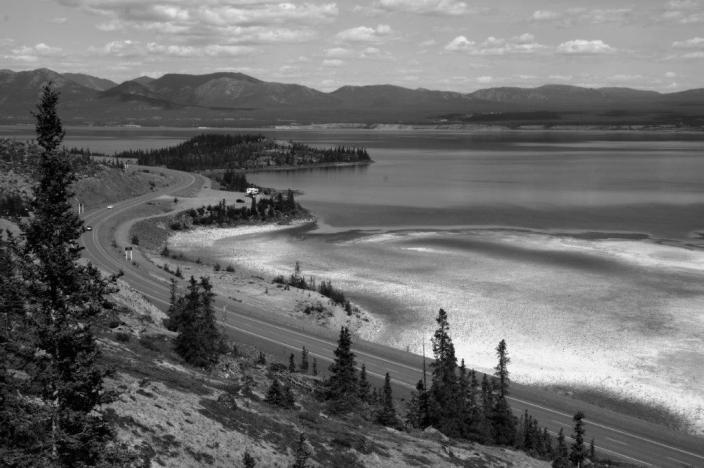 With so much of the lake bed exposed there is often dust blowing across the surface.

Way down below in a barely visible patch of trees is our truck, on the outer edge of the highway curve.

A full zoom helps bring it in closer.  The climb was only about half a kilometer, but it was uphill all the way.

On the other side of the highway from the Soldier’s Summit pullout was another viewpoint that had more information about the history of the lake. 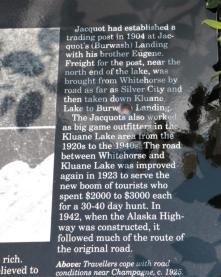 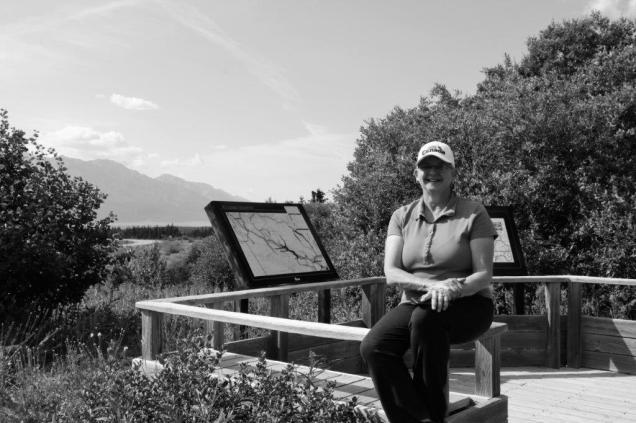 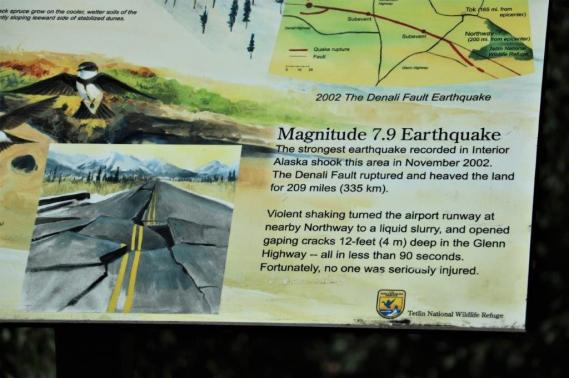 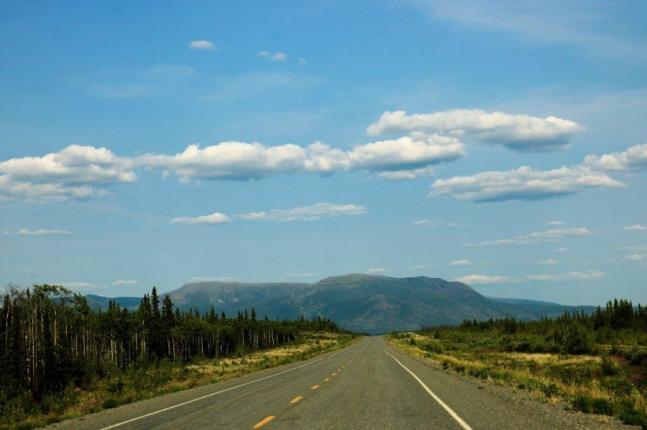 Between hikes, geocache hunting and viewpoint stopping we didn’t arrive in Whitehorse until almost 8 pm.  We checked-in to our hotel and immediately went to the restaurant for some dinner.  After we had eaten we got our stuff out of the truck and headed to our room for a good sleep.