I had very little sleep.  The back of my knee kept wanting to cramp.  I got up several times during the night and felt dizzy.  When I woke at 7ish, I felt terrible.  I was dizzy, nauseous and couldn’t tolerate the light.  This had happened to me in April after a bad night.  I was not happy to have it happen again.

We were going to go to the museum and take a tour around Valdez before we left for Tok, but with my feeling so terrible that was axed.  John did take a short drive around and took a few photos with my camera so I would have some for my blog.  He is a good man.

The edge of Ruth Pond

TAP – the end of the 800 mile Trans-Atlantic Pipeline from Prudoe Bay to Valdez.  The pipeline also entails an additional several hundred miles of feeder pipes and is one of the world’s largest pipeline systems.  There are 11 pump stations along the route to Valdez.  The pipeline was constructed after the 1973 oil crisis to ensure American access to oil.  It was built between 1974-1977 and in the 40 years since has transported over 17 billion barrels of oil.  I read that some of the spills that have occured have been caused by sabatoge and BULLET HOLES!  Seriously – bullet holes!  Some people just feel the need to shoot at everything.  We have encountered so many road signs and information placards that are riddled with bullet holes.  It makes no sense to me whatsoever.

Back through Keystone Canyon.  This area, with its sheer rock walls is popular with climbers, and in the winter, many adventurous souls do ice climbs. 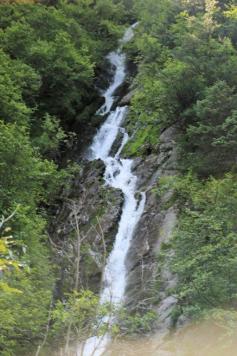 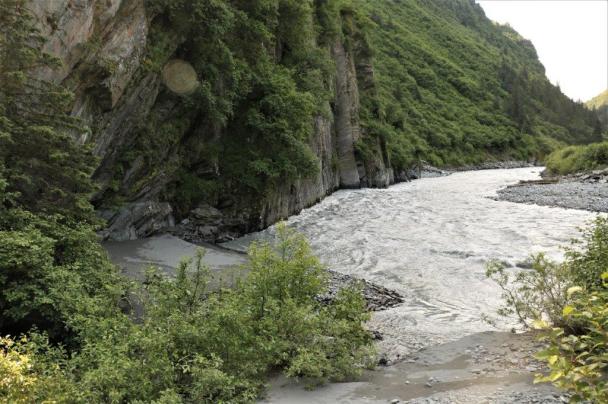 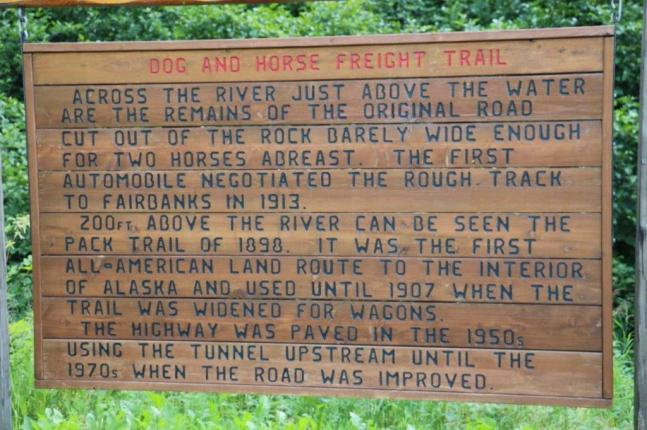 The markers for the snow plows are so high in these parts.

Coming toward Worthington Glacier from the other side.

When we drove into Valdez yesterday I noticed this incredible view far down a valley on a path below a viewpoint.  It was getting late and we had driven a long while so we decided we leave the hike until the return trip providing the weather was still good.  We estimated it would take a half hour or so each way.  However, today, I could not face making such a hike.  John noticed that there was a ‘trail’ that branched off before the view pullout and there were vehicles driving it.  It was pretty rugged, with big rocks and potholes to navigate, but John loves the challenge of that sort of thing and we have a 4×4, so off we went.

See the people on the trail down from the viewpoint at the bottom of this photo?

This is the ‘road’ John drove.

And this is the view at the ‘almost’ end. The black vehicle in the stitched photo below is at the very end. 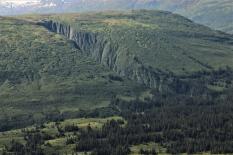 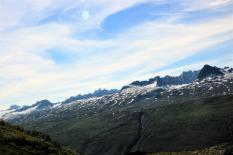 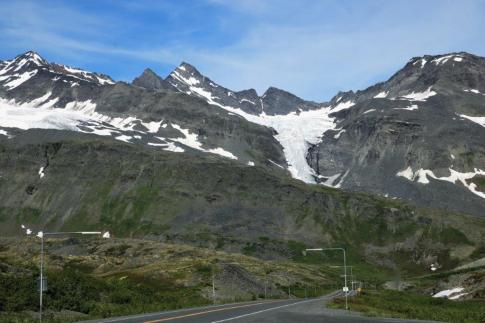 There was so much late summer haze yesterday when we stopped at the glacier we decided to do another quick run in since the light was better. 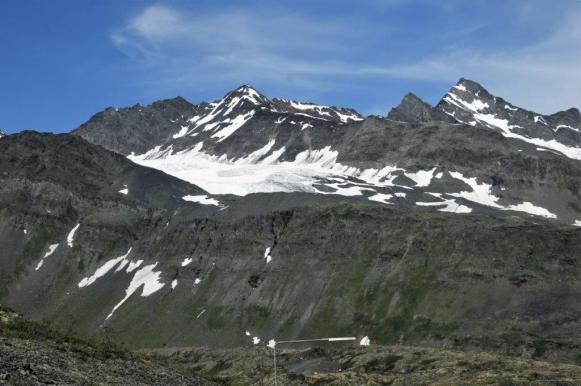 The ridge line on the photo on the left is a trail that people have made walking up to see the glacier from a higher perspective.  In the photo on the right, if you look at it full screen, you can see a small group of people near the dark spot at the bottom of the glacier.  The photo below is a close crop to pick them out better. 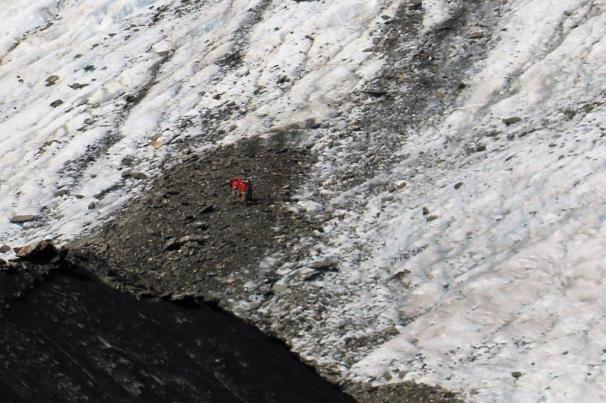 These three folks climbed up almost to the top point of the lighter gravel above them.  From what anyone could see using the telescopes, one of them may have had hiking boots on and was carrying a walking stick.  We think the other two were just in running shoes.  Near the top of the lighter gray gravel section they started to go across the glacier, but the surface was so slippery, the one in the red jacket could get no traction and was very timorously inching along.  After awhile, thankfully, they started to come back down.  And, me, being me, was thinking, “These people are idiots. If one of them falls and slips the others have no way to assist.  None of them had proper equipment and glaciers are known to crack at any time.”  Several people were watching them and all of us were shaking our heads.  I don’t understand why so many people do so many things that are so stupid!  But, as they say, there is no cure for stupidity. That’s all I’m sayin.’  I have no problem with folks doing adventurous or dangerous things as long as they know what they are doing and are properly equipped for the task.  (And so says, the woman, who as a child climbed out the attic window of her parents house and sat on the roof to read, and climbed to the top of a 50′ fir tree and did her homework. But…I was a really good tree climber back then!)

As I said, I was not feeling at all well and for most of the drive, unless I got out of the truck to see something, I had my sunglasses on, my cap pulled low and my eyes closed dozing as John drove.  And, somewhere, at some point after we left the glacier my camera set itself to monochrome!  So all the rest of the photos I took, or that John took for me, are black and white.  No idea how that happened.  John gave me the few photos he had taken that were in colour so I could include them here.

We passed Willow Lake again and the four mountains of the Wrangell Range were mostly out of the clouds.  The distance between the mountains is quite long so the a stitched photo is pretty thin. 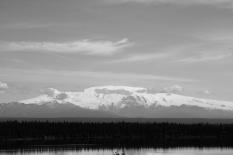 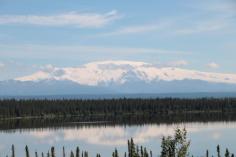 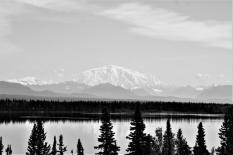 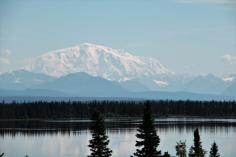 The area around Valdez was a major copper mining center.  The local Native peoples had used copper for ornamental objects for years and readily traded them with the explorers and miners.  Of course, exploration for mines soon followed.

I really liked the wispy clouds in the bright blue sky.  Well, it was blue when I saw it. 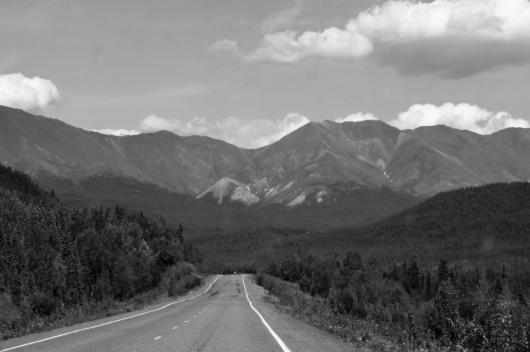 By four o’clock I was starting to feel better.  I could stand the light and was no longer nauseous, but was still very tired. We arrived at Tok at 4:45.  I immediately got ready for bed and dozed while John went to fuel up the truck and have some dinner.  He brought me back a salad and some chicken fingers and I ate about half of it before crawling into bed.  I remember nothing until the next morning.