We were up at 7 and leaving the hotel in Hay River at 9:30.  John had gone over to the RCMP to check if they could get him a new driver’s license since his is missing.  They directed him to the licensing office, which was in the building across from the hotel parking lot.  While waiting for it to open at 9 he called the toll free number for ICBC to see what he might be able to do.  They emailed him a copy of his license and told him he could get a new one in Fort Nelson for $17.  In the meantime he could drive, but he would risk being charged for failure to produce his license if the police chose to not be gracious.

Our first stop was a gas station to top up the fuel tank.  We drove in to the Esso and noticed the big “Full Service” signs.  I commented to the fellow when he came out that I had not seen a full service sign at a gas station for years.  He laughed and said, “Welcome to the Northwest Territories.”  Then he proceeded to tell us some ways that the territories differ from the provinces in Canada:  NT has 11 official languages – English, French and 9 indigenous languages.  In school children must learn English, French and at least one indigenous language.  For every three years that a child attends school between Kindergarten and Grade 12 they receive one year of free university.  If you break the law repeated in any of the three territories of Canada you can be expelled.   From Hay River and nearby areas a person would be put on a bus to Peace River, AB where they would be met by an RCMP officer with a warrant that says they can never return to any of the three territories.  EVER.  If they do they will be arrested.  They have chain gangs in the northern prisons and if you do not work a chain gang you get put in solitary.  Canada, above the 60th parallel has 25% of the world’s fresh water.  Great Slave Lake is the 10th largest lake in the world.  Whew.  The fellow was a font of interesting information.  All in the time it takes to fill a gas tank!

We drove through Hay River to the edge of Great Slave Lake and walked out on a lovely sandy beach. 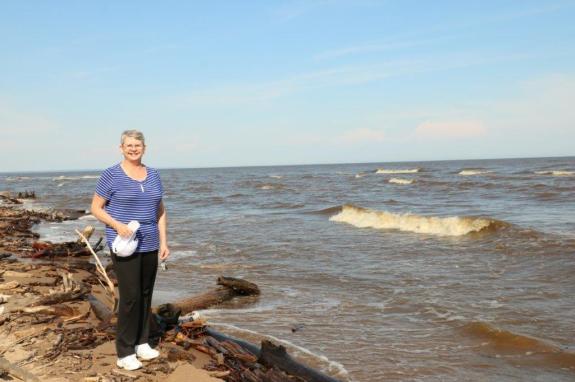 There was a geocache at the Hay River Territorial Park so naturally we had to go find it.  As we were leaving the beach area a young man carrying a toddler and with a pre-school daughter walked in wearing swim suits and all prepared for a morning swim.  Somehow when I think of the Northwest Territories I do not think of sandy beaches and swimming.  Shows how much I know about the north obviously.

These three big pictures were hanging on the side of a building.  There was a fourth one but I didn’t really like it so I didn’t photograph it. 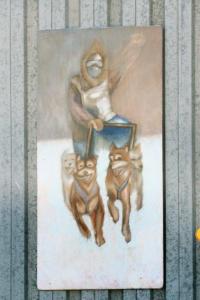 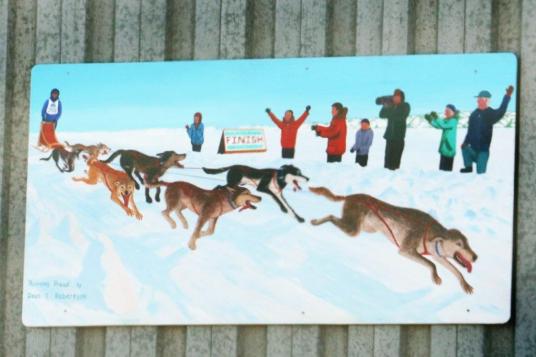 Hay River is not a large town, population about 3,500, but it is the second largest in the Northwest Territories, after Yellowknife.  What we found very interesting is the 16 story apartment complex pictured below.  We saw no other buildings in the area anywhere that were higher than three stories.  How this one came to be built, I have no idea.  It totally dominated the skyline in all directions.

We finally left Hay River at 10:30 and headed up Highway 1 towards the territorial capital of Yellowknife – 477 km away (296 miles).

We stopped at McNallie Creek where there is a huge punchbowl at the base of a narrow waterfall. 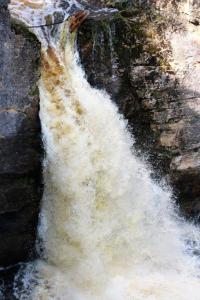 At Lady Evelyn Falls we had some lunch. 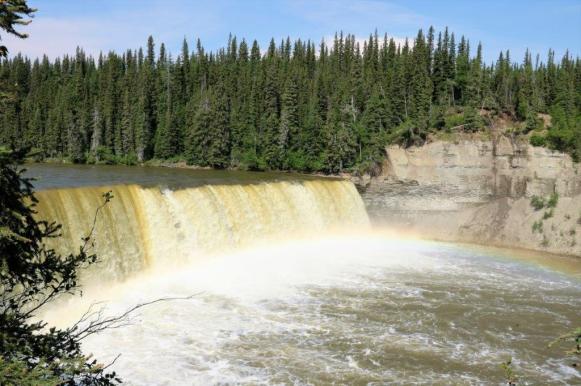 Not far from the turn-off onto Highway 3 you enter the Bison Sanctuary.  There are warning signs all along the road to beware of the bison as they like to eat the grass on the roadside verge and they like to sun themselves on the pavement.  There we several pull-outs along the route with information about the bison.

Where once there was a ferry across the Mackenzie River there is now the Deh Cho Bridge. 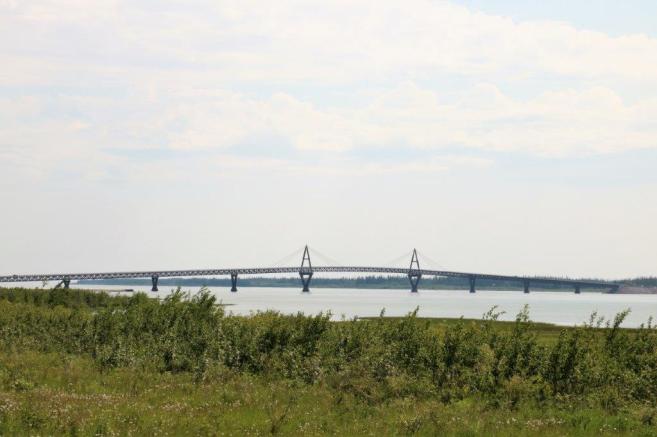 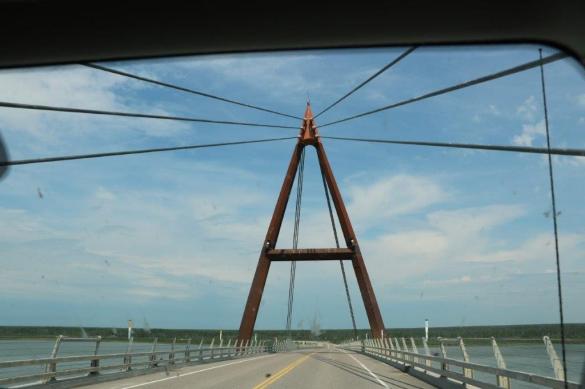 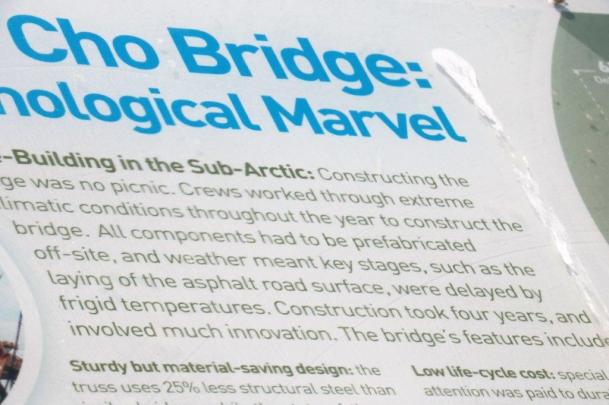 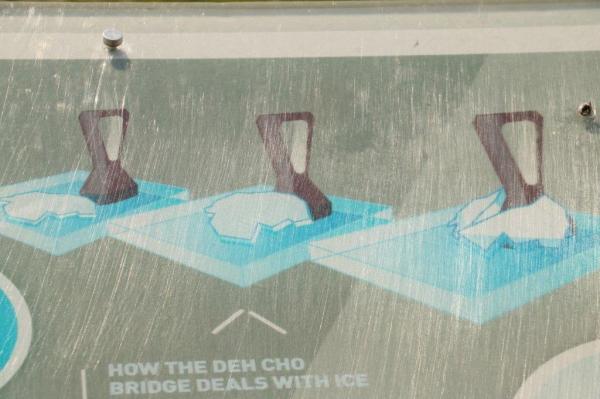 We took a 5 km diversion into Fort Providence, a small community on the river shore.

There had been huge forest fires in this area in 2014 and 2015 and we drove through the results for miles and miles. 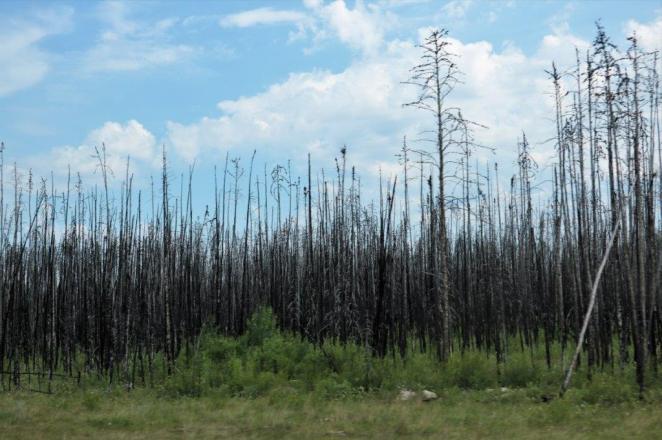 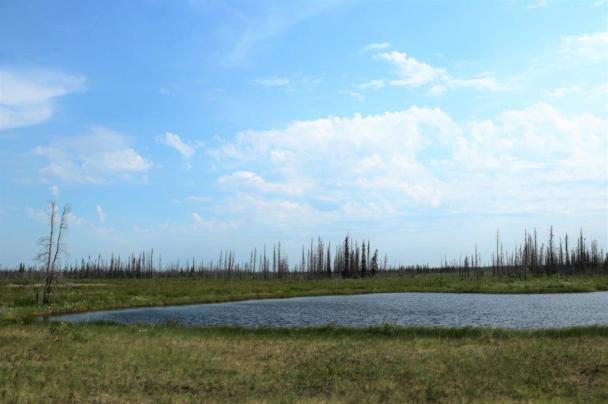 By now it was late-afternoon. We had been driving beside the bison sanctuary for several hours with no sign of the critters.  We had stopped at one of the information pull-outs to look for a geocache, but it began to rain slightly and there was another vehicle parked nearby so we decided to press on.  Not a great deal further down the road this big fellow wandered past our truck.  My photos were taken through the bug-splattered window but he walked down the road on John’s side so he was able to get some clear pics. 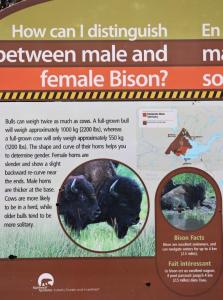 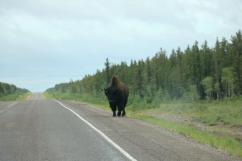 These two photos are John’s.

We only made one more stop on our way to Yellowknife – also to find a geocache.  That was at the bridge across the Frank Channel. 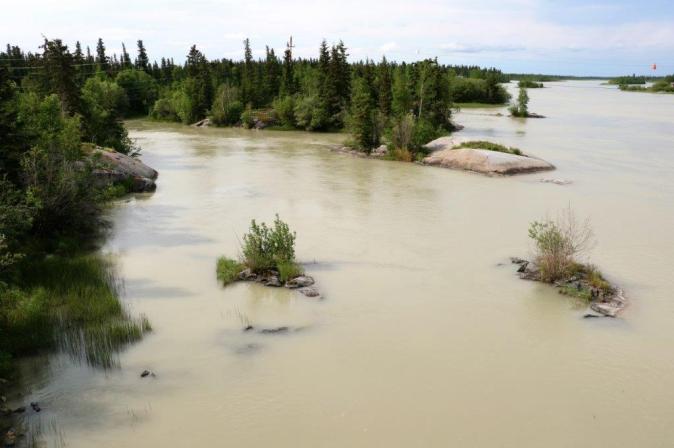 The remaining 100+ kilometers to Yellowknife were driven through a very rocky area.  Huge, rounded, smooth boulders appeared on both sides of the road for the rest of the way to the city. 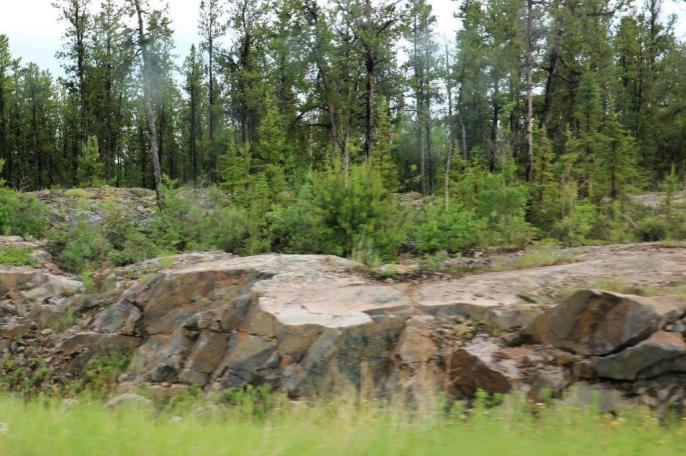 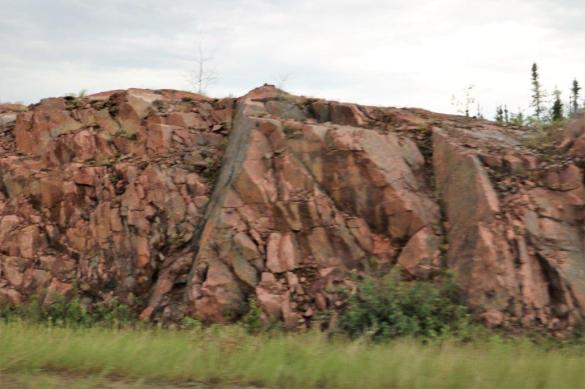 We arrived at 6:30, checked into our hotel, where we will stay for three nights, walked across the parking lot to Hotspots Pub for dinner, and returned to our room to sort photos and write a blog.  A long day, but a good one.