We were up at 8 and had finished breakfast and checked email before leaving the hotel at 10:30.  It was overcast and dry when we got up, pouring rain by the time we finished our showers, and not raining again when we left.  This, we were told, had been the pattern for the past two weeks.

I saw this flyer in a tourist information display case near the elevator as we were going back to our room after breakfast.  Where else would you see a list of winter clothing you could rent? 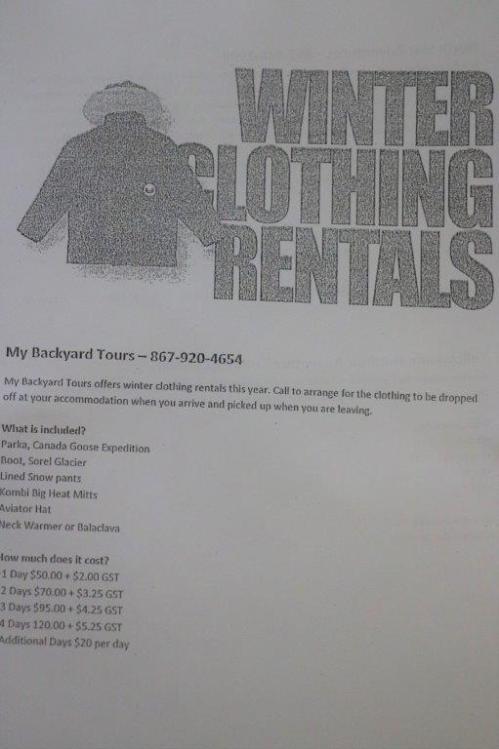 I wanted to get a copy of the walking tour of Old Town from the Visitor’s Center so that was our first goal.  Unfortunately we couldn’t find the Visitor’s Center.  We followed the map, confirmed by the big ? signs, but never found the building. We drove past where it should be at least four times with no success.

While we were searching for the Visitor’s Center we did end up doing a walk down by Frame Lake.  We parked near the Department of Defense building and went over to the memorial in the garden.  During our day we discovered many memorial cairns or plaques in various places around the city. 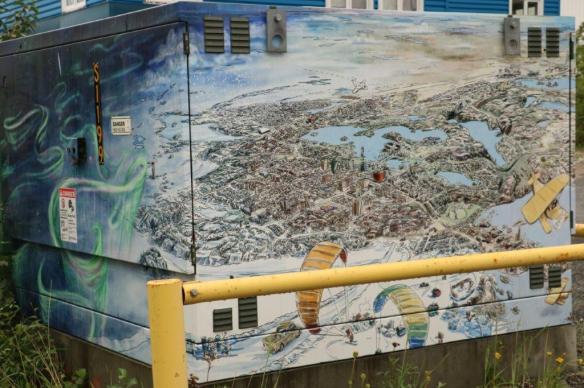 The city has embarked on a beautification project.  Many of the hydro boxes have been painted.  I loved this one.  On the other end there was a depiction of swirling snow.  It was beautifully done.

These two memorials were for RCMP members who had lost their lives in the line of duty in the Northwest Territories and the Yukon.  The other one commemorates the vital role played by sled dogs. 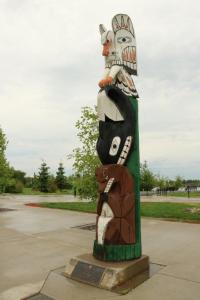 This totem was carved and erected in 1971 for the centenary of British Columbia with the union of Canada. No idea why it would have been placed here.  It sits in front of city hall, which is the building above.

The tourist information center, at one time, was housed in this little log cabin.  It seemed like all the signage still pointed you toward it, yet it hasn’t been the Visitor’s Center for many years.  It is now a craft shop. 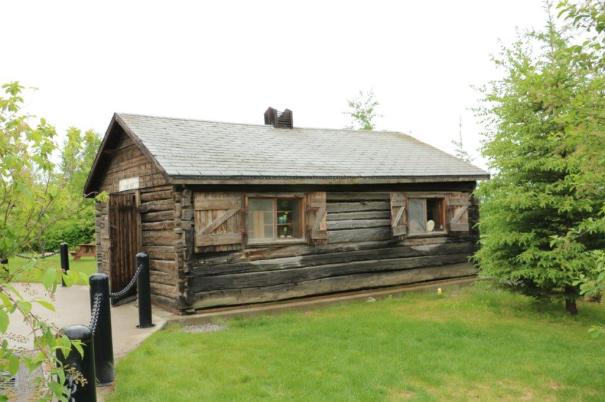 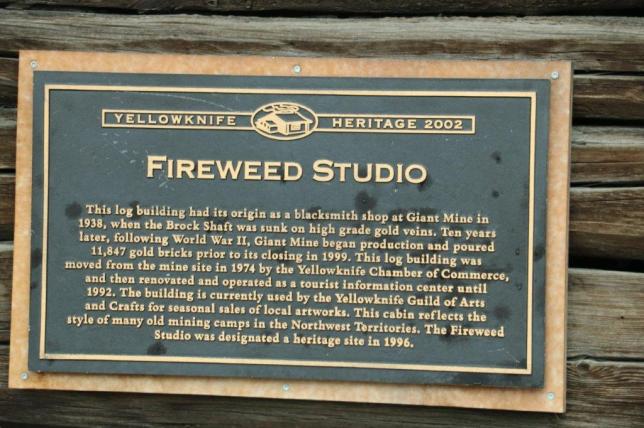 Behind Fireweed Studio is a grassy park and we could see an interesting sculpture down by the water so we walked over to check it out.  The park is called Sombe K’e and is a very popular venue for picnics and musical or cultural events.  The water is Frame Lake. 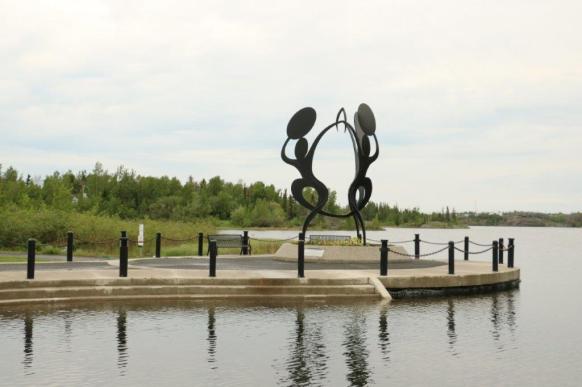 There were stairs into the water all along the large curve of the shorefront.  Easy access for a swim. 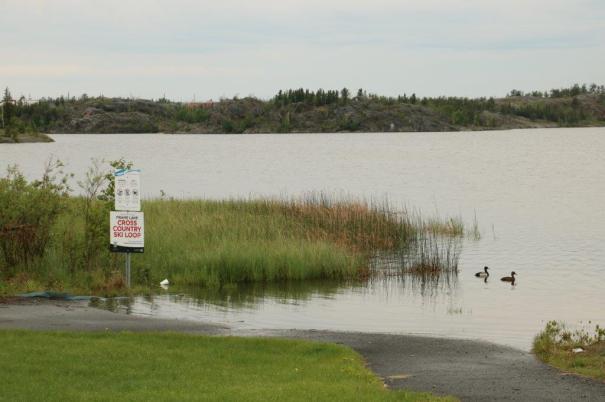 I liked this sign.  But, to be fair, in the winter the lake will freeze and it would become part of a ski trail – just not right now. 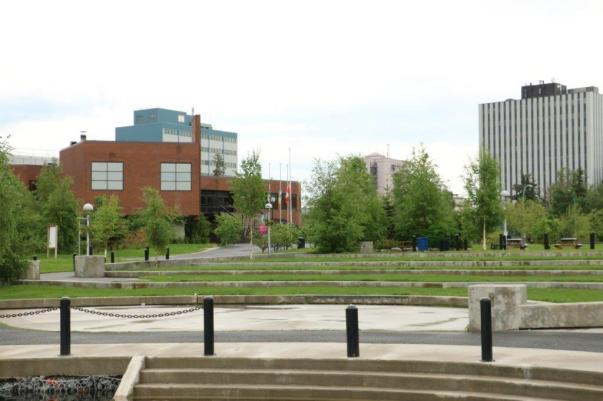 This outdoor stage area is host to musical and cultural performances almost every evening all summer long.

Across the end of Frame Lake is the Prince of Wales Heritage Center.  We were not planning to go, but, changed our minds and took a look-see.  Therefore there are two parts to today’s blog.  Part 2 covers our time in the museum.

The Garden of Hope – dedicated to a local lady who died of cancer several years ago.  When Prince William and Katherine were here in 2011 they unveiled a new plaque that told about the significance of some of the recently added plants.

Further down the pathway we came upon another memorial.  I did say they were all over didn’t I?  And this was not the last one we saw today. 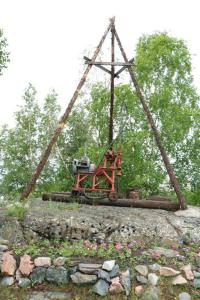 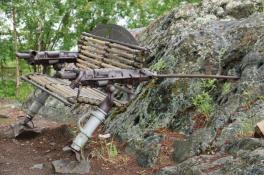 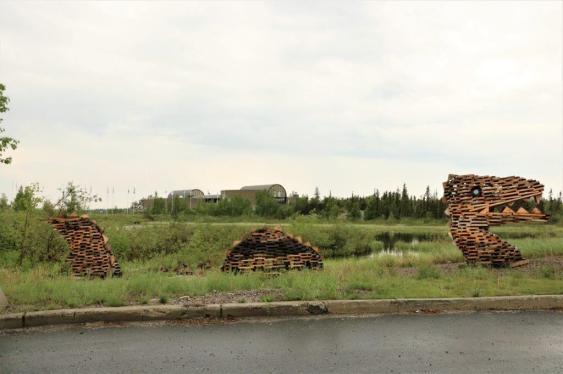 This nice dragon was made out of building pallets.

We made our way back to the truck, had some lunch, found a geocache in the garden of the Department of Defence and another one alongside Highway 3 on the edge of town during another foray to locate the Visitor’s Center.

After we finished looking at all the exhibits at the Heritage Center, we decided to take a drive down to Old Town, which is a narrow spit of land with Latham Island just across a short bridge.  On Latham Island is the little log cabin that was the Bank of Toronto.

We had heard about the houseboats; that they were interesting to see and we spotted them as we drove into Old Town. 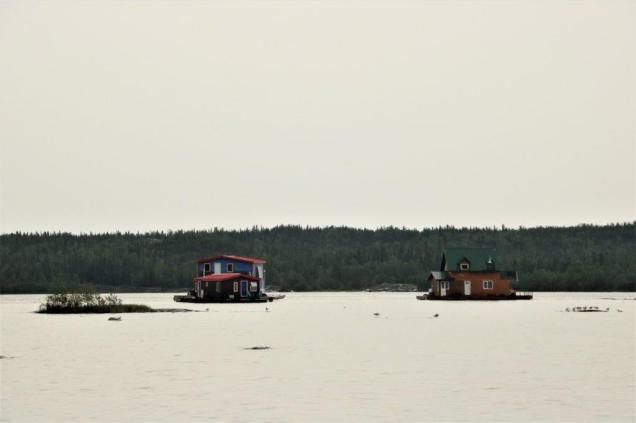 When they say houseboat up here they really mean a house on a raft that is permanently anchored in the Yellowknife Bay.  Many of them are completely self-sustaining.  Very cool.

There are several heritage buildings in Old Town: the Hudson’s Bay Company Warehouse, the Old Log Schoolhouse and the outfitters Weaver and Devore building.

At the end, atop a massive rock is the Pilot’s Memorial, honouring the role played by the bush pilot in the development of the North.  We had to climb about 50-60 stairs to the top.  At the bottom of the stairs is another memorial to some aviator pioneers that died. And across the road where we parked the truck was another one dedicated to three airmen that died in a crash.

On a nice day, the 360 degree view would be outstanding.  Even on a cloudy day like today you could still see Old Town and new Yellowknife, as well as Yellowknife Bay and Back Bay. 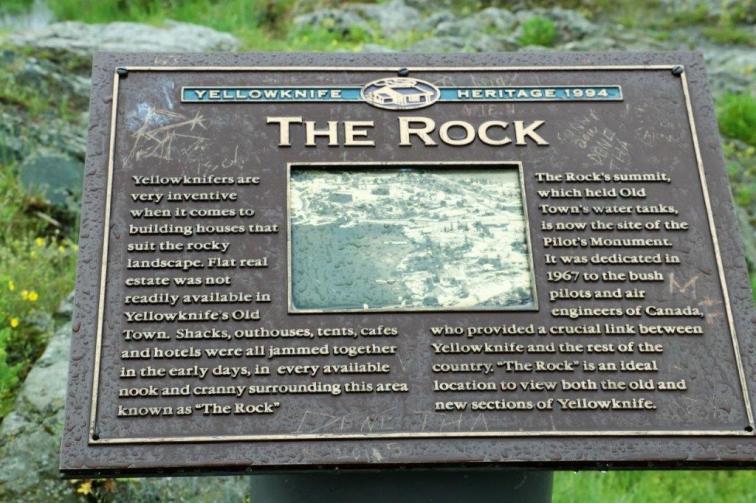 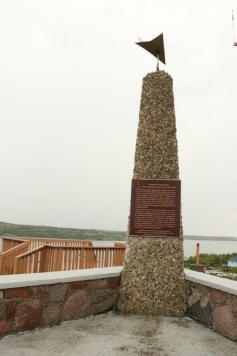 This rocky terrain reminds me very much of Newfoundland.  Same huge smooth rocks.

You could see some more of the houseboats in Yellowknife Bay. 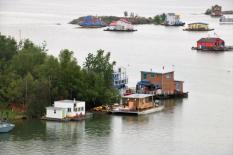 We climbed back down all the stairs to the truck and headed back into Yellowknife.  We were a bit wet and a bit footsore so we decided to go to our hotel and rest for awhile before venturing out to find some dinner.  John made a quick stop for me to take a photo of the Cultural Crossroads. 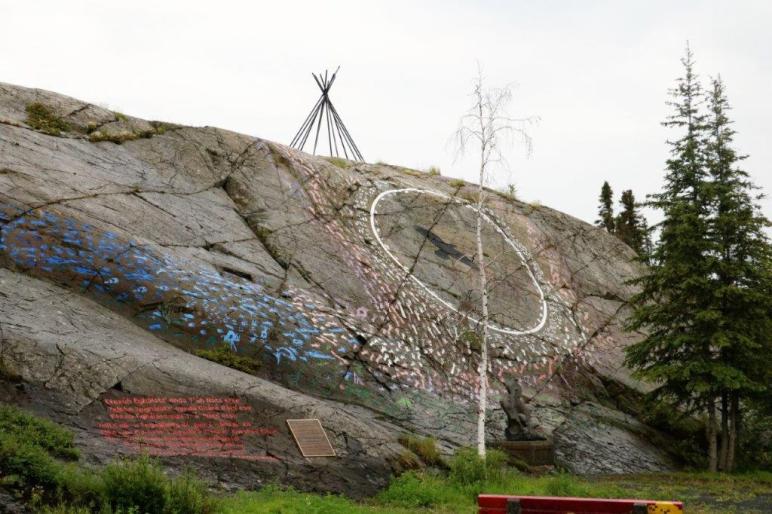 My last photo of the day is of a storage building with a quirky addition to the boring garage doors.  I love a good sense of homour. 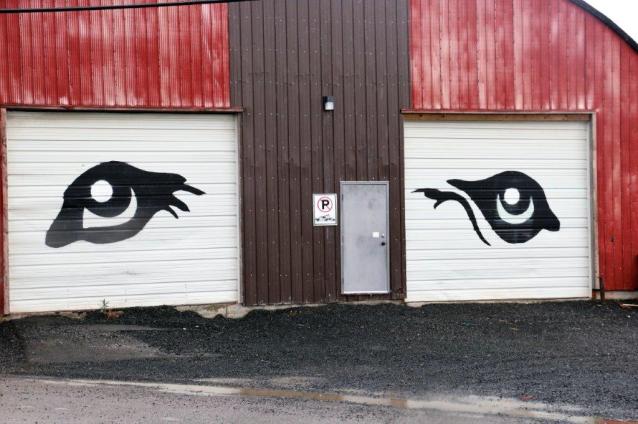 Tomorrow is our last day in Yellowknife and we plan to tour the Legislative Assembly Building and see if the Diamond Center is open.