The sky was somewhat overcast when we woke up in Peace River this morning.  It was also very warm.  We were surprised by how hot it was when we arrived yesterday and today is expected to be the same; 29-31C (84-87 F).

The mouse for my laptop decided to quit working last night so it took me forever to do my blog.  I wasn’t leaving town without a new one.  Fortunately there was a Wal-Mart just down the street so after we checked out of our hotel that is where we went.  15 minutes and $20 later we were on the way out of town.

We hadn’t gone very far and we noticed rain clouds nearby.

We stopped at the small community of Hotchkiss to find a geocache. 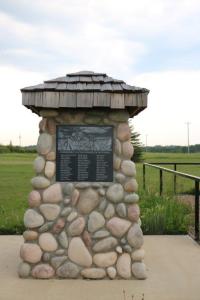 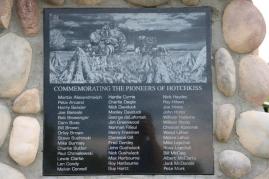 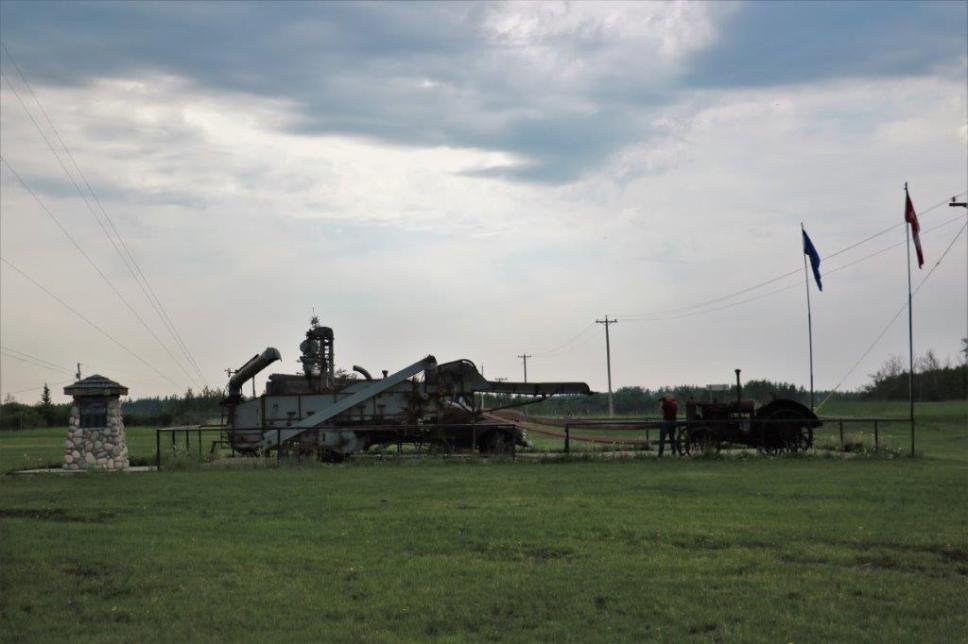 Back on the road again we drove through some torrential rain which would switch on, then off again a few km later. 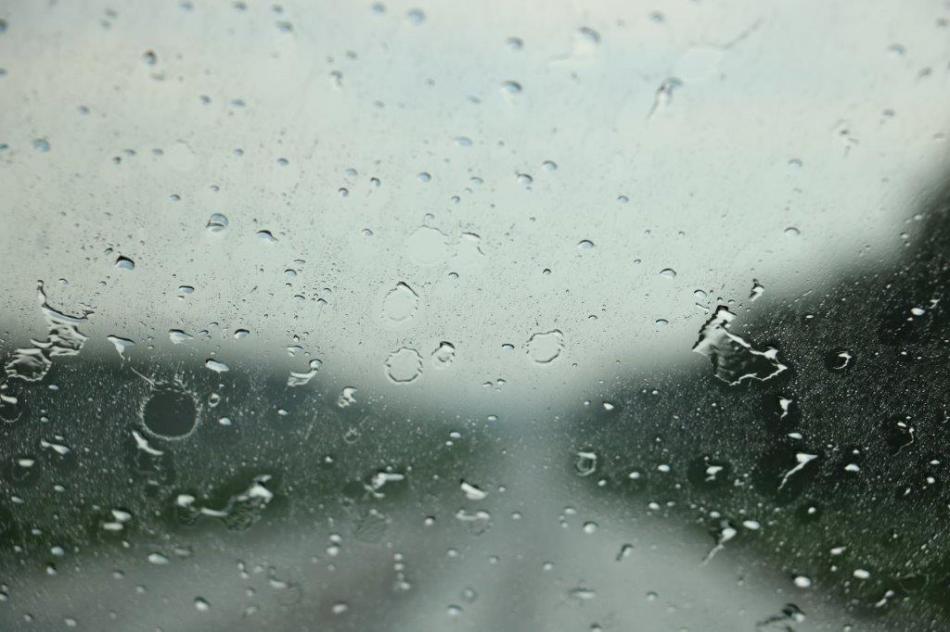 The good thing about the heavy rain was that it washed all the bug carcasses off the windshield.

It seemed that every pond we passed (and there were plenty of them on both sides of the road) contained one or two beaver lodges.  I haven’t managed to get a good photo of one yet, but I will keep trying.

We crossed the border from Alberta to Northwest Territories at 4:30 and at the same time crossed the 60 parallel. 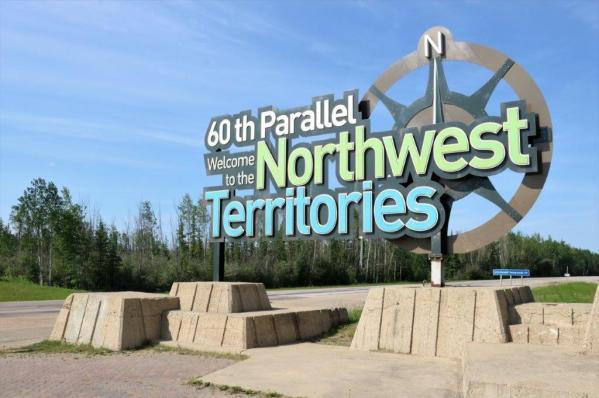 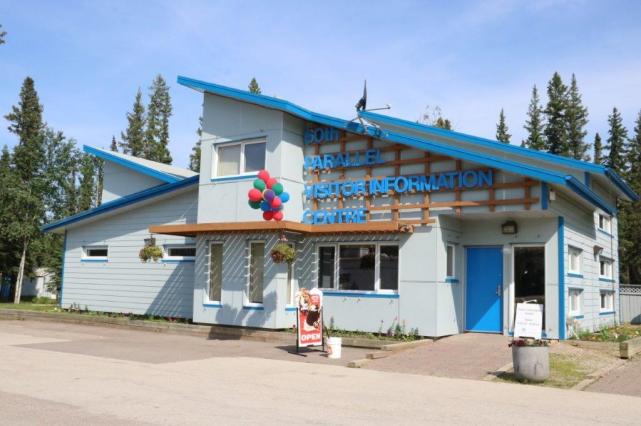 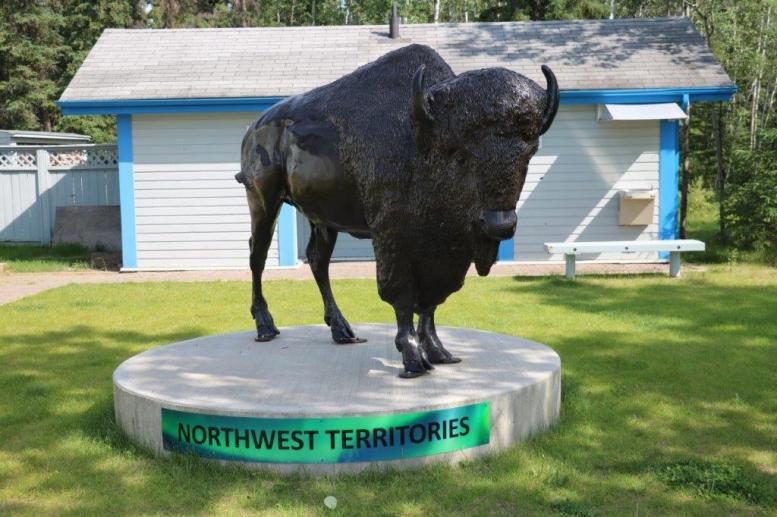 Inside the Visitor’s Center they had taxidermy examples of the wildlife of the north. (The wolverine was in a glass case so the reflections did not make for a good photo unfortunately.) 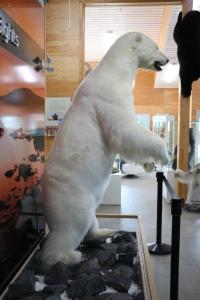 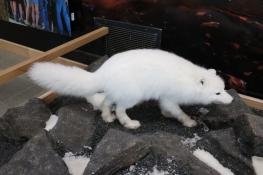 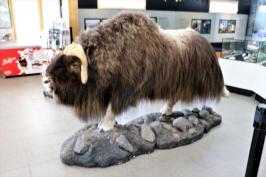 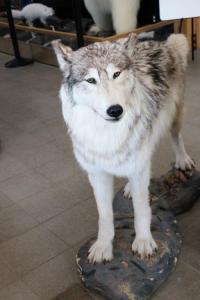 While John was off searching for the geocache that was hidden across the road, I walked the short trail to the 60th Parallel. 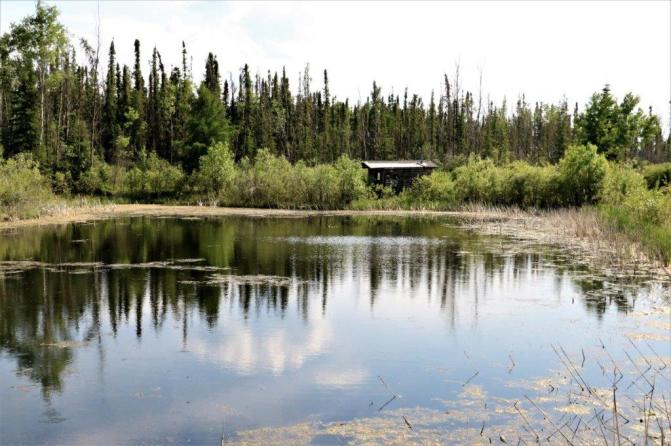 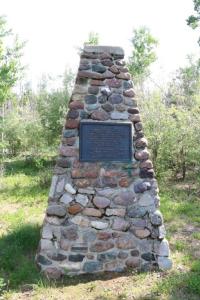 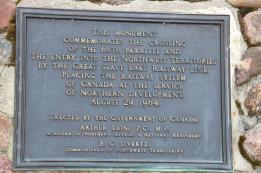 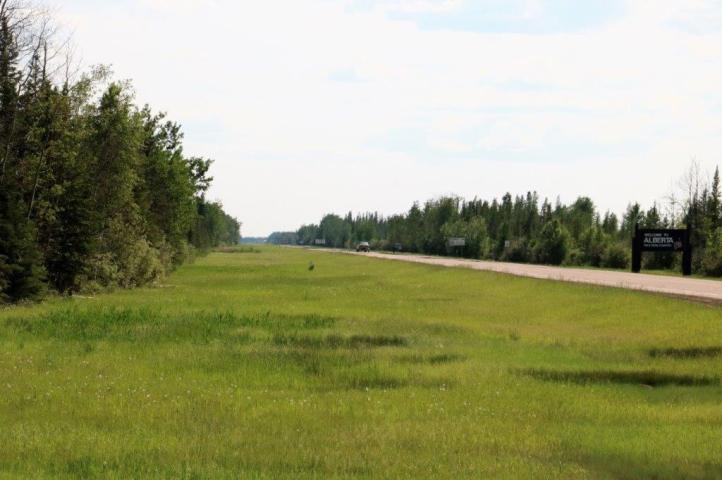 Just past Enterpirse, NT we stopped to see the Twin Falls – Alexandra and then, a couple of km down the road – Louise. 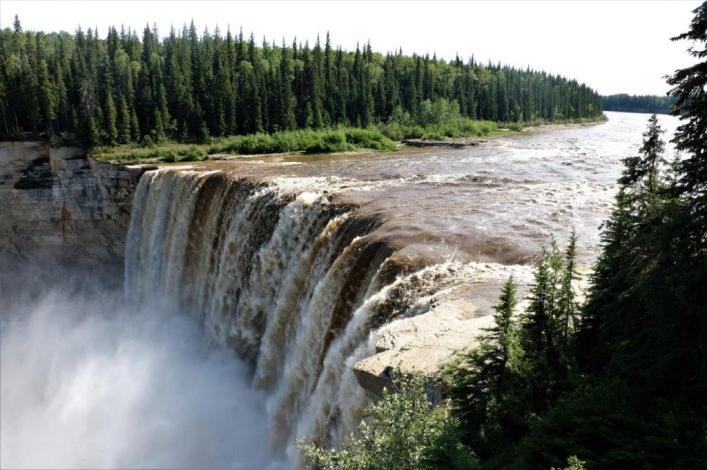 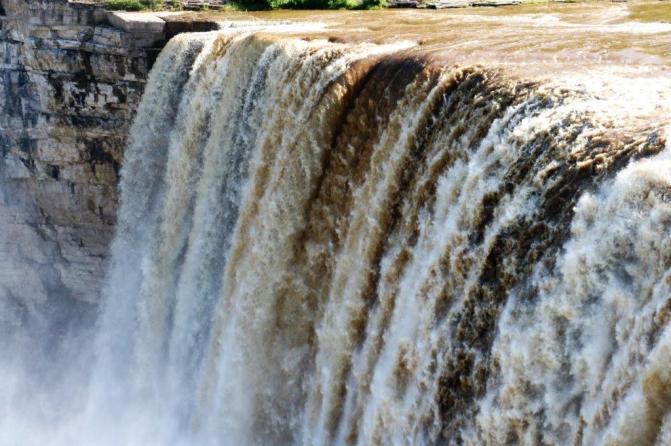 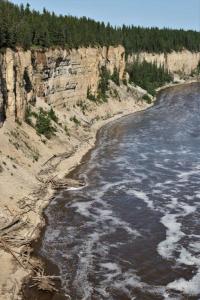 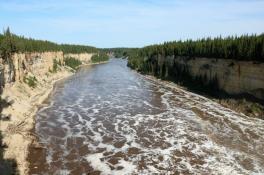 As we were leaving the viewing platform at Alexandra Falls, there was a group of people having their photo taken by one of them.  John offered to take a photo of them all, which they were pleased to have him do.  Then one of the young men said, “Do you want to take a picture of us?  We’re a bunch of crazy Indians.”  John laughed and took their photo.

He had barely been able to see the group in the screen of the phone he was given when he took their picture, as they were backlit, so when we spotted them at their vehicles in the parking lot, John showed them the shot he had on his camera and offered to email it to one of them in case the one on the phone was too dark.  His offer was accepted, and as Terry was writing out his email John and I chatted to the older man.  He asked if we were from Alberta and we told him, “No we were from BC,” and told him our home town.  Harvey said, “I have a friend there,” and told us his name.  We laughed and said we had known him and his wife for years and, in fact, they attended our church.  What a small, world!

Louise Falls. I have never seen a squared-off waterfall before. 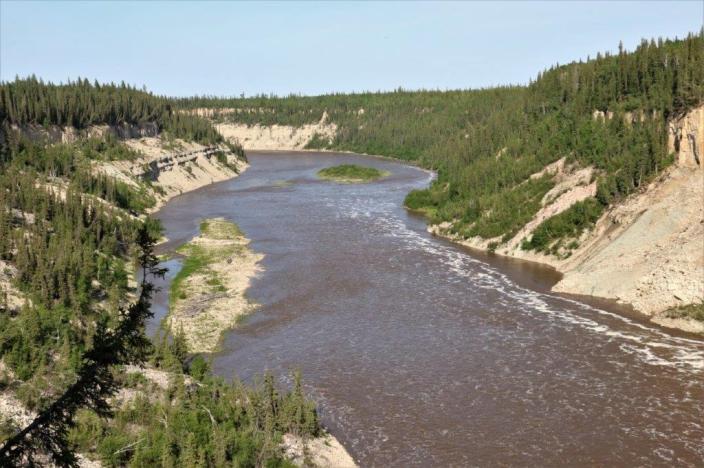 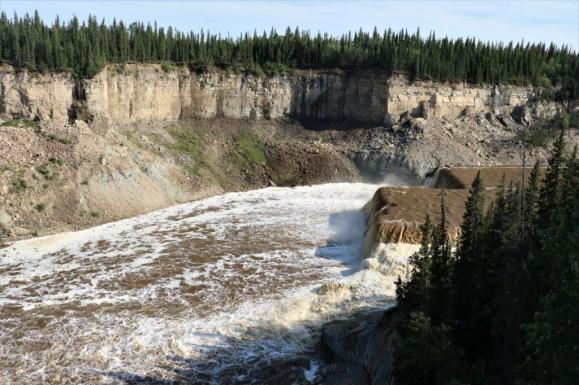 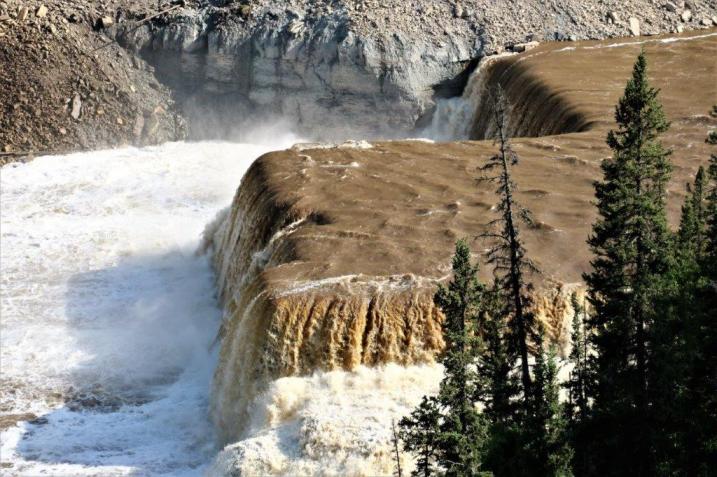 25 or so kilometers (15 1/2 miles) down the road we arrived in Hay River where we were spending the night. 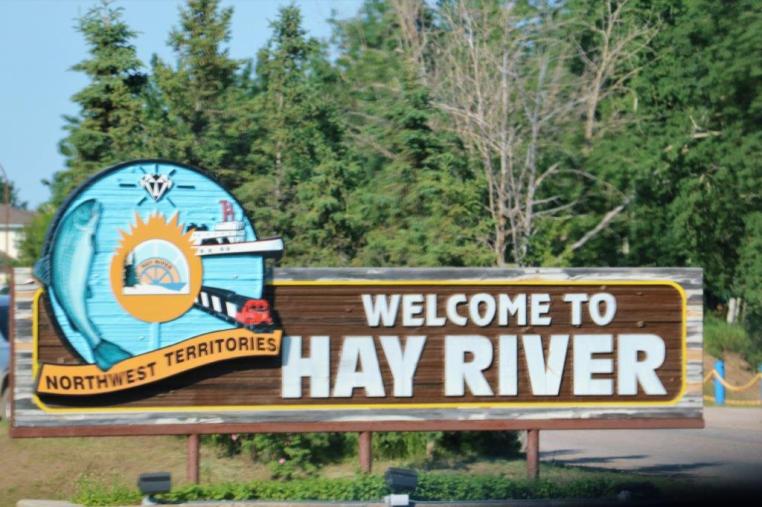 At the hotel when John was checking in, the man at the desk asked for some ID.  John took out his wallet to get his driver’s license and discovered it was missing!  He has been driving this entire trip so far and who-knows-how-long before that without a driver’s license!  He has no idea where it went, nor when he last saw it.  It is kept in a tight sleeve in his wallet so it wouldn’t have just fallen out.  Yet, he can’t remember when, nor under what circumstance he would have last taken it out.  Obviously the first stop tomorrow is the RCMP office to see if we can get a copy of his BC license.  If that is not possible here in the Northwest Territories, I will be doing all the driving for the next five days until we are in Fort Nelson, BC – which will be at the end of a 13 hour day driving on a gravel road.  That will be fun!