We were blessed with another sunny day for our port in East Iceland.  Seydisfjorder (Say-diss-fjor (fyour)-dur – in Icelandic the stress is always put on the first syllable of the word) is considered to be one of Iceland’s most picturesque towns, not only due to the impressive environment but because nowhere in Iceland has a community of old wooden buildings been preserved so well as here. It is a mid-size town with a population of 670.  11,000 people live in East Iceland, spread over a large area.  The biggest community in East Iceland is 3600-3700 people. 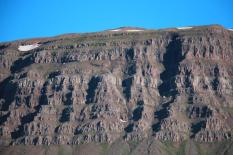 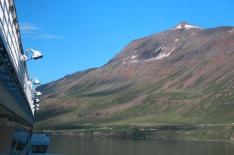 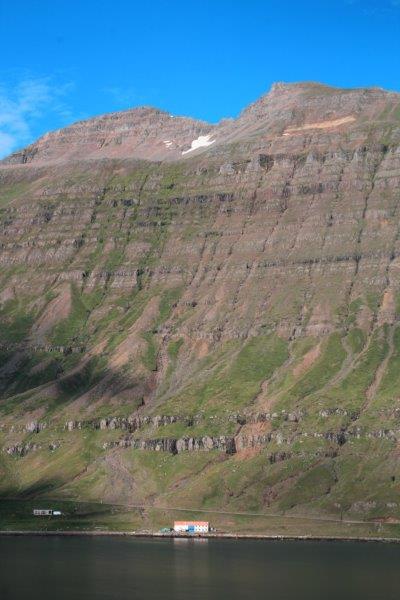 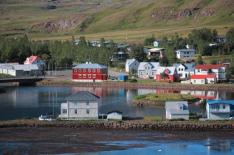 Iceland was first settled by two brothers in 874 AD; one was killed and the other settled near Reykjavik.  The country was completely settled between 870-930AD.  Icelandic parliament began in 930 with an annual meeting of all the chieftains who represented all free men who could bear arms.  At the parliament they split the country into quarters with 9 chieftains in three quadrants and 12 in the north.  Every farmer had to swear allegiance to one of the chieftains and in turn the chief would handle issues for the farmers in parliament.

They felt they did not need to have a king because the country is so remote and has a harsh climate so invasion was considered unlikely. A king is, above all else, mainly a military General and Iceland figured they had little risk of war from outside so they didn’t need one.  However, eventually several of the chieftains wanted to control more territory and fights and wars continued for 60 years.  In 1262 they realized that none of them had enough might or power to control the others so they decided that for the sake of national peace, all the chieftains would swear allegiance to the King of Norway.  One chieftain did not take the oath until 1263 and an East Iceland chieftain did not submit until 1264.

The religion was Norse paganism until 1550 when it became Christian (by vote of parliament).  Catholicism was the religion until Protestantism was brought to the island, then all the catholic priests and bishops were either kicked out our killed and the country’s state religion became Lutheran; which it is to this day. 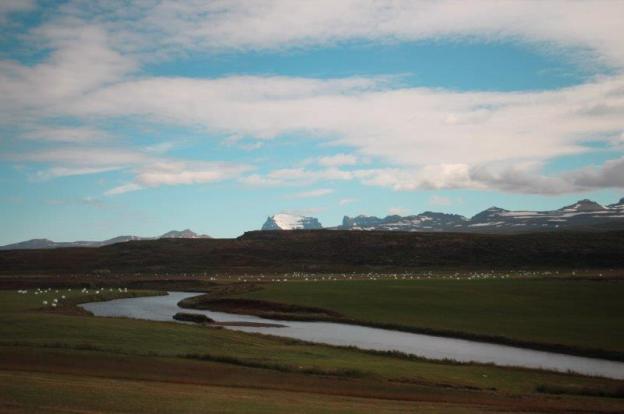 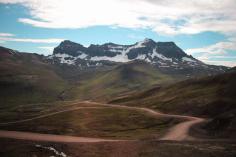 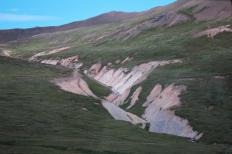 Iceland is 80% uninhabitable.  Settlement can only be done on the coast as the center is either glacier, lava fields, or alpine desert.  All the towns and villages around the coast are located at the end of fjords or in fjordal inlets.  The country has a vastly long coastline due to all the fjords and the offshoots.  Seydisfjorder is at the end of a 17 kilometers long fjord with the same name, and the community was first settled in the 19th century by Danish fishermen, which makes the town quite new in relation to the country’s long history.

We had a long tour with several stops that took us over the mountains to what was once known as the most dangerous path in Iceland – over a steep scree slope that constantly sluffed off and was susceptible to slides – that were blamed on a monster called The Rumbler.  The path has been turned into a safe road but the cross erected to pray for safe passage remains and is renewed every few years with the same Latin prayer inscription and the date 1306.

Our tour was called Monsters and Elves and our tour guide regaled us with many Icelandic folk tales about trolls, Elves – the hidden people, and ghosts.  We had a great day.  The scenery was fabulous, lunch was really good and the sun shone all day.  We had no time to tour the town as all-aboard was 5:30, exactly when our tour ended. 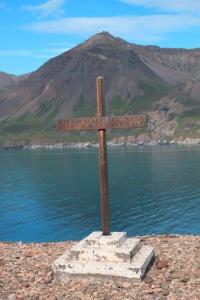 We stopped for lunch at a little fishing village called Bakkagerdi.  After lunch we drove over to the sheltered little harbour where we managed to see some puffins and then went back for a walking tour of the town.  A very pretty place. 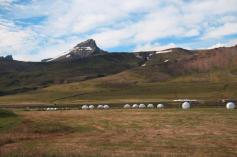 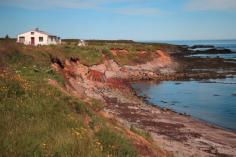 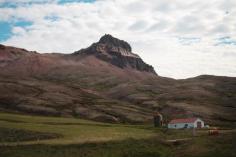 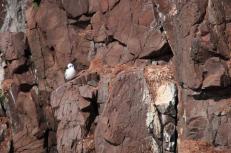 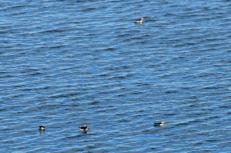 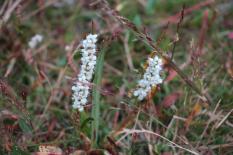 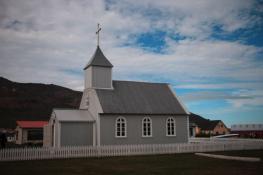 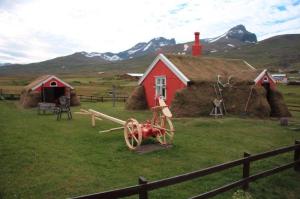 The most photographed house in Iceland.  Sod-packed sides.  It is still lived during the summer months. 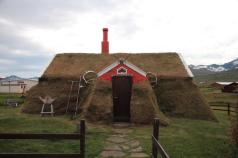 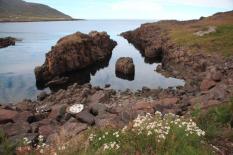 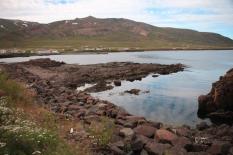 We made a couple of  short photo op stops at a nice gorge and a waterfall  before the last bit of driving back to the pier. 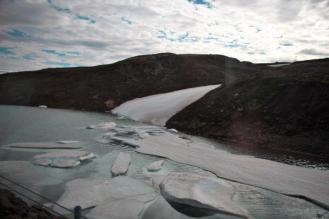 You know it has been a cool summer when there is still ice in the river.

Seydisfjordur and our ship 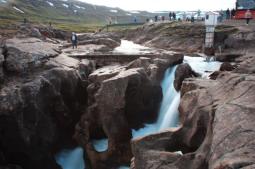 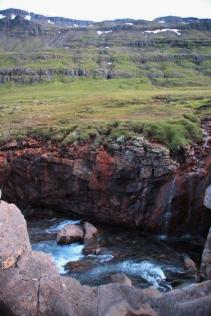 During the night, as we rounded the end of the fjord and made our way towards Akureyri we crossed the Arctic Circle so we have a new certificate and we are now official members of the Ancient Order of the Blue Nose.