We arrived in Newfoundland on August 18, in the rain.   Here we are 10 days later and we are still getting rain – we have had three days of sunshine since arriving.  They had 6 straight weeks of sunshine and above average temperatures through all of July and early August.  I guess they used it all up because the forecast for the next week is still mostly rain.

Well, you can’t do anything about the weather.  You either hole up in your hotel and do nothing or you go see the things you want to see.  We chose the latter.

Newfoundland has 29,000 kilometers of coastline, not because the island is gigantic (although it is very large), but because there are several peninsulas with numerous inlets and bays so the coast meanders and winds in and out all the way around.  We drove to the tip of the Braie Verte Peninsula today.  At one time there were several copper mines on the Braie Verte and as we drove up we came across huge hills of tailings and then the old open pit mine could be seen through the trees.  Since the closing of the mine the rain, and probably ground water too, has made ‘lakes’ in the deepest pits and the color was gorgeous.  Even on a cloudy raining day like we had the blue was very vibrant. 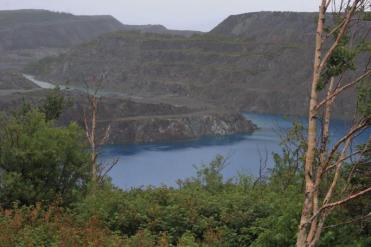 The tip of the Braie Verte Peninsula was 89 km from the main TCHwy.  At the end was a little town called Fleur de Lys and there is an historic site on the far side of town.  It is an ancient Dorset Paleoeskimo Soapstone Quarry.  There were several archaelogical digs there in the mid-1960’s to determine which peoples used the quarry and what uses they made of the stone. 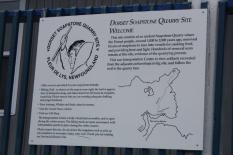 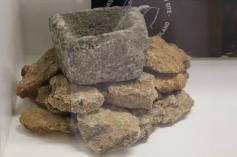 Many stone tools carbon-dated to the age of the Dorset people were found.  It was determined that the main use of the soapstone was cooking pots and bowls.  Soapstone retains heat even after being removed from the fire and it is quite easy to carve so utensils were often made from it when it was available. There are a thousand indents in the quarry face where pieces were removed between 500 BC and 500 AD.

After we checked out the quarry we continued up the trail and climbed to the lookout which had a 270 degree view of the Braie Verte inlet and the town of Fleur de Lys.  We stopped for a light lunch at a picnic area in the town of Braie Verte.  It was called Rattling Brook Park, which was stange as the Rattling Brook Falls are located quite a few kilometers away; they were on our to-do list for today. 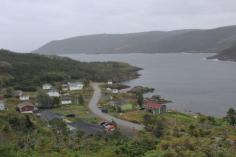 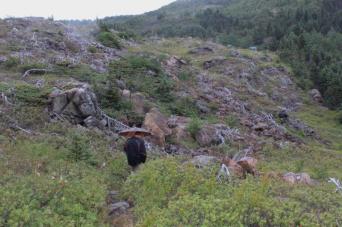 We decided to investigate and climbed through the woods along the creekside to see the waterfall.  The trail was really a worn track and ended at a huge boulder.  John scaled it easily,  I climbed about 1/2 way up and decided that was far enough.  I had no problem with going to the top, my issue would have been getting back down the slippery wet rock.  It took too long to get my hip replaced, I am not about to risk wrecking it.  I gave  John my camera and he took a few shots for me.  Then I slid down the boulder on my butt bracing my feet in the crannies as I went.  Needless to say I sat on a wet bum for awhile.

A slippery slope at the top of the trial.

We drove back to the TCHwy and went a bit further east before turning north again on Highway 391 to Rattling Brook and King’s Point.  Rattling Brook Falls is the most scenic waterfall in Newfoundland and has a straight drop of 800′.   It was a 1 km hike in but there was a really nice boardwalk and flights of stairs all the way (270 of them) to the very top. 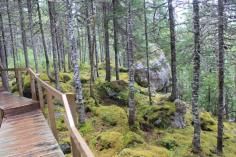 There was a new viewing platform at a lower level than the original because a rock slide had come down the cliff and ripped a chunk of boardwalk out.  We decided that it was still possible to navigate the broken bit and climb to the top of the highest viewpoint.  The waterfall flows down a narrow crevice between two bare rock cliffs.  It was quite impressive. 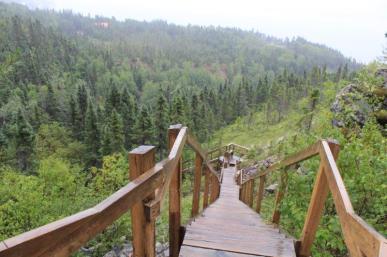 I love the moss!

We had driven through King’s Point on our way up to Rattling Brook but stopped in on our way back to see the Humpback Whale Pavilion.

There is a Great Whale Tour in Newfoundland where, at various places, there are skeletons of different whale species to view.  King’s Point had a 52′ Humpback Whale. 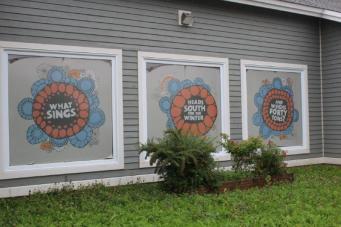 The whale was a mature female.  In 2001 she and her calf got trapped in fishing lines.  People were able to free the calf but the mother drowned.  A group of people in King’s Point had been wanting to get involved in the Whale Tour and got permission to use the whale.

The community where she died was quite aways from King’s Point and the plan was to carve the flesh off the bones at the site.  However she was frozen so the body was towed by boat to King’s Point, lifted out of the water with an excavator and taken to the local dump where a bevy of community volunteers had the smelly, dirty task of removing all the bones.  They were then crated in containers and placed back into the deep water for a year where the bones were cleaned of all remaining tissues by the crabs and other sealife. 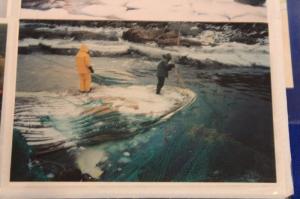 When they were brought to the surface again they were pressure washed, loaded onto a truck and sent to Drumheller, Alberta to the Dinosaur Museum.  At the museum experts teated the bones and created a steel frame for the skeleton, put it back together, made a pattern for the pieces, took it apart and sent it back to King’s Point where it was reassembled and placed into the Pavilion for display.  The community got some government grants to cover the cost of sending the skeleton to Alberta and building the pavilion but everything else was done by community volunteers and the pavilion is staffed by volunteers. The $5.00 per person charge pays the utilities and building maintenance.  Great project and really well done. 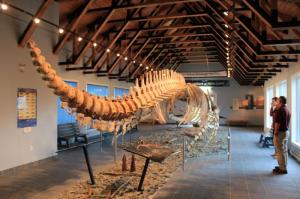 Some of the baleen from the whale’s mouth. It is just like long hair and is made of keratin, the same as our hair and fingernails.  It grows throughout the whale’s life. They use it to strain thousands of gallons of water per mouthful for krill, shrimp and other small fish.  The throat of a humpback whale is the size of a grapefruit so they don’t eat anything large.  Just LOTS and LOTS of small stuff at a time. 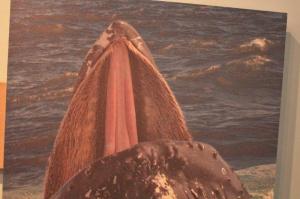 Close up photo of the baleen in the top of a whale’s mouth.  The big pink part is the tongue.

We arrived at Grand Falls-Windsor for the night at 6:30.  I think that is the latest we have been on the road our entire trip.  It was a wet day all day but we enjoyed ourselves nontheless.