I’m not even going to discuss the weather!

Except a brief mention of  the temperature (9 C – 48 F) and the wind (strong enough to almost blow you backward – honest).  There.   Done with that.!

We left Grand Falls-Windsor at 10:30.  It wasn’t a good night.  We were on the first floor of an older hotel with no soundproofing.  We could hear every step in the room above and the people, especially the young fellow next door, felt no need to latch their door quietly rather than let it slam behind them; even at midnight, for heaven sake.  And the rain beat loudly against the window off and on all night. Good thing there is always coffee available at breakfast.

We had thought of traversing the Bishop’s Falls 972′ trestle bridge, now a public boardwalk, but it just spanned the Exploit River so we decided a two-sided view of water did not justify the freezing we would receive while we did it.  We were driving out of town and spied a hydro-electric plant.  We followed the flying flags to the Bishop’s Falls Park which overlooked the dam site and braved the wind long enough to take a few photos. There’s lots of water running over that dam. (Of course it has been raining for days and days so that would account for it I guess) 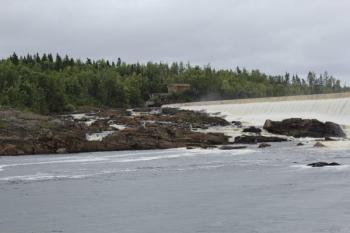 We continued driving along Highway 1 East until the Route 340 turn-off north to the area know as the Bay of Islands and, particularly New World Island right at the end.  We crossed four causeways, hopping from island to island. 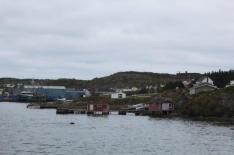 Near the end of New World Island, is the favorite ice berg watching town of Twillingate.  We are too late for ice bergs – we were very fortunate to have seen the two on the horizon at St. Anthony – but we wanted to check the place out anyway.  We drove to the end of the road; a little place called Crow Head which is 2 km further on from Twillingate and chanced upon the Long Point Lighthouse.  There were three trails you could take along the coast at the lighthouse but because it was SO WINDY and SO COLD we were not doing that.  It was all I could do to brace myself against a railing to take some photos. 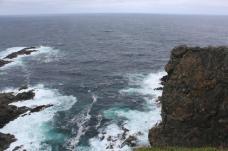 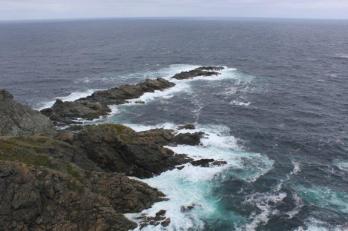 The former light keepers house is now a small museum about the by-gone days of wooden boat building in Newfoundland.  Because we were freezing we decided to go and look around and have a chance to warm up inside.  When we bought our ticket for the museum we were asked if we also wanted to climb up to the light.  I love lighthouses and we hadn’t done our stair climbing yet today so I said we would.  It was only 55 steps to the top, so not too arduous.  The view was lovely even with the dark clouds and the wind was so strong you could hear it batter the glass. The poor flagpole was arcing back and forth and a third of the flag was wrapped around the top thrashing about. 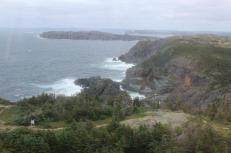 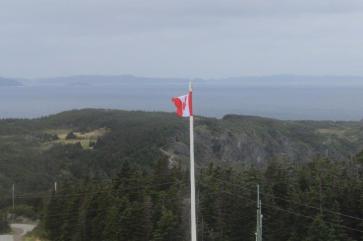 The lighthouse was built in one year between Dec. 1875 and Dec. 1876.  The mortar between a bunch of the bricks beside the stairs is cracked due to an earthquake in 1929.  But the lighthouse is still sound, the wooden stairs don’t even creak and the light still warns the ships and boats about the rocky coastline.

Little islands and upthrusting rocks are common all around the Newfoundland coast but the Bay of Islands has a lot of them and if the water is churning (like today) the rocks are submerged and many a boat has paid dearly when they hit one.

After we warmed up in the lighthouse we rushed to the car, turned the heat on and drove into Twillingate.  We parked at the Foodland store because it formed a good blockade against the wind while we made a PB&J sandwich and hopped back into the truck to eat it.  Then we drove back across all the causeways and islands and turned onto Route 331 south to Gander.  We are spending the next three nights in Gander and will do some further exploring from here.

I think this is a Minke Whale skeleton, but I am not totally sure. 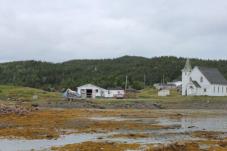 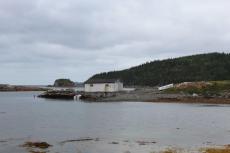