To be honest, this blog series seems a bit weird to me.  Usually when I am writing about one of our road trips I can include information and photos of museums, or historical sites, or old forts.  This trip is literally a road trip and all I have to share are things we see along the road, which seems strange.  But it is winter and everything is closed; including the tourist information centers.  And our primary goal on this little journey is to get at least one geocache in New Brunswick and one in Prince Edward Island to complete our Canadain Provinces cache finds.  After today we can check New Brunswick off the list!

We were blessed once again with bare roads and sunny skies.  It was a lovely drive from Grand Falls to Moncton.  Before we left Grand Falls this morning we drove down to see the falls for which the town is named.

There is a bit of snow here and I had to make my way over to the fence behind this picnic table to see the falls. 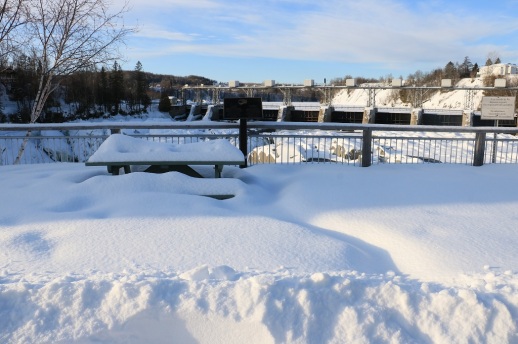 There is a hydro-electric plant here that uses the massive amount of water that flows through here to produce power.  In the winter there is very little water flowing into the gorge.

If you look closely at the photo above, near the right side there is a muddy-looking bit.  That is the only open flowing water.   But,  judging  by  the  information  on  the  plaque  below,  in  the  spring  it  would  be incredible!

We went back over the bridge after trying to see the falls from the tourist viewing area and walked halfway across to get a better look at the gorge. 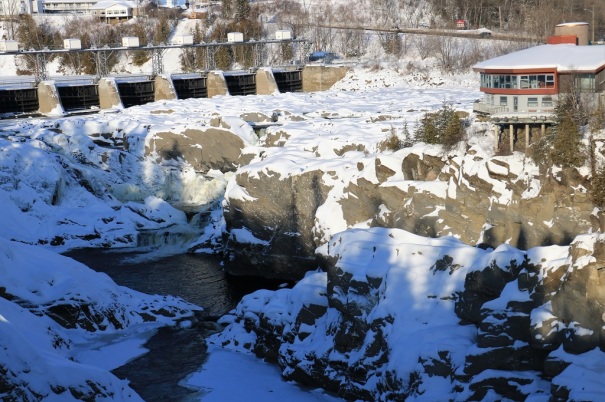 The nice round holes you can see on the images above are potholes carved out of the rock by the water.

After checking out the falls we took to the road again toward Moncton.

There are two bridges that cross the river near Aroostook and just off the freeway between the bridges there are two geocaches hidden. This was our first real opportunity to find a New Brunswick cache since it was dark when we got into Grand Falls last night. 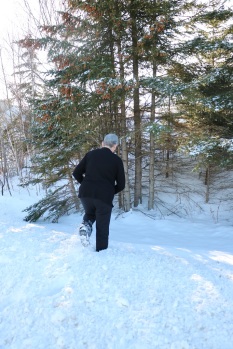 If one is going geocache hunting in New Brunswick in the winter, one must be prepared to walk through some snow!

We deviated from the Trans-Canada Highway near Aroostook and drove down the quieter Highway 130 as far as Hartland before rejoining the main highway.

We came across another covered bridge; one that was connected to a metal trestle bridge at Florenceville.  Florenceville was named in 1855 by the Lt. Governor of the day in honour of Florence Nightingale, the founder of modern nursing and the heroine of the Crimean War.  I remember reading her biography when I was in Grade 8. 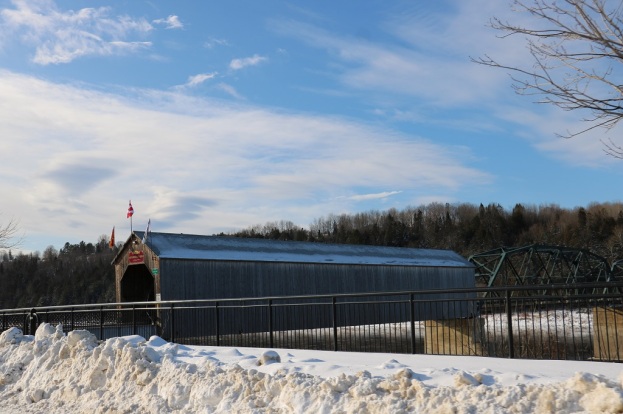 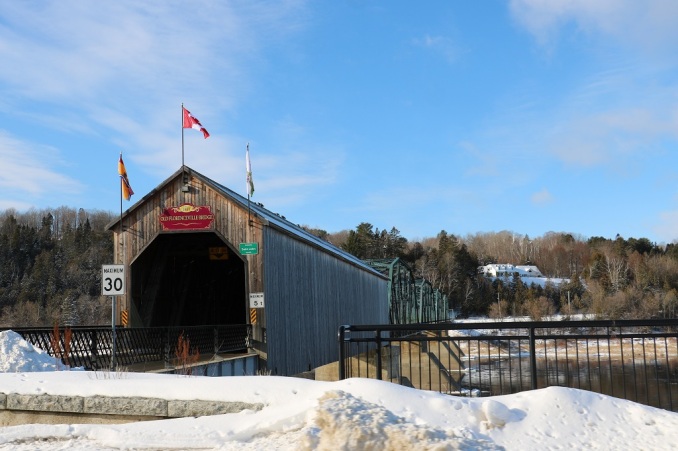 Florenceville is the french fry capital of the world due to the McCain Foods factory.    Information on the company says, “Since 1957, McCain Foods has grown proudly from its Florenceville, New Brunswick roots. With 30 employees and sales of $150,000 in its first year of business, the company has grown to become a global enterprise with more than 21,000 employees operating out of 53 production facilities on six continents with sales in excess of CDN $9.5 billion globally, while remaining Canadian headquartered and family-owned.” 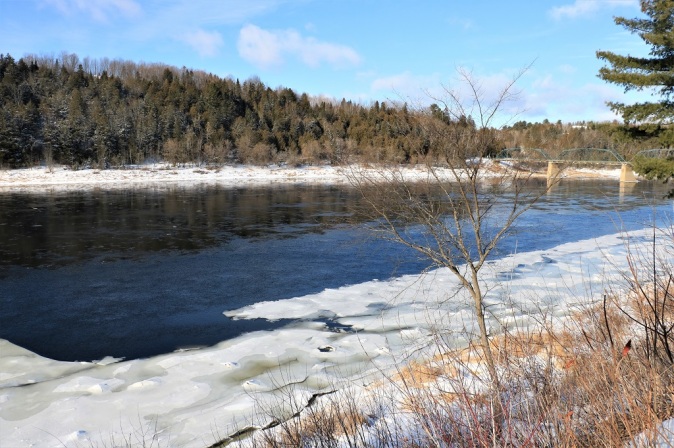 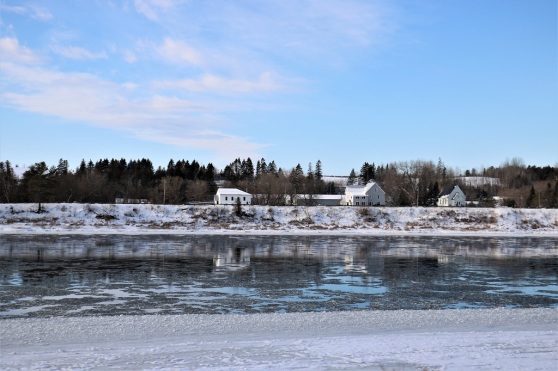 We stopped near the famous Hartland Bridge and bought some lunch at a local grocery store deli, then drove across the world’s longest covered bridge and parked on the other side so we could walk back and find a geocache hidden about halfway along the 391 meter-long bridge. 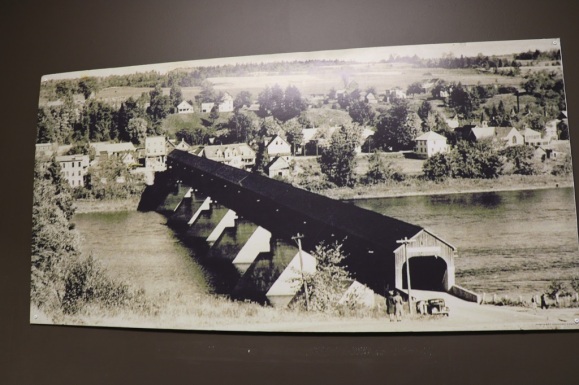 It is only a one-lane bridge so you have to look to the far end and see if there is a car coming before you enter. 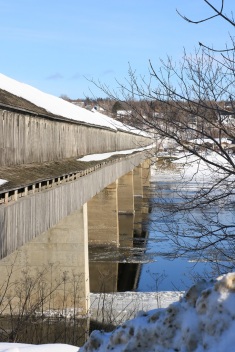 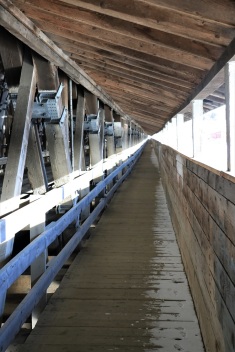 I  liked  the look of  the  bridge  peeking through  all  the  tree  branches.

There are lots of bridges across the St. John River.  This the newer bridge at Hartland.  After we found the cache on the covered bridge we re-connected with the Highway 2 – the Trans-Canada – and drove to Fredericton.

We had visited Fredericton sights, including the New Brunswick Parliament Building in 2014 and we only diverted today to go find three earth caches and a virtual cache that were all close together and did not have a lot of onerous questions to answer.  It took us about an hour to find them all and then we were on the road again without stopping until we reached our hotel in Moncton.

One of the Earthcaches was at the Science Center which is located in the old Fredericton Provincial Jail.  It was built between 1840 and 1842 and was a maximum security facility. There are still bars on the upper story windows.

The last Earthcache took us to the campus of the Univerity of New Brunswick, Fredericton Campus to find an erratic glacier boulder that had been unearthed during construction and now sits in front of the Forestry and Geology Building. 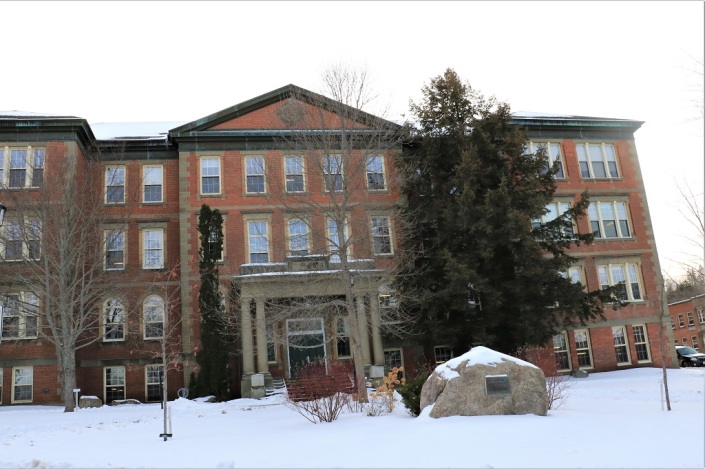 A few of the nice old buildings on the campus. 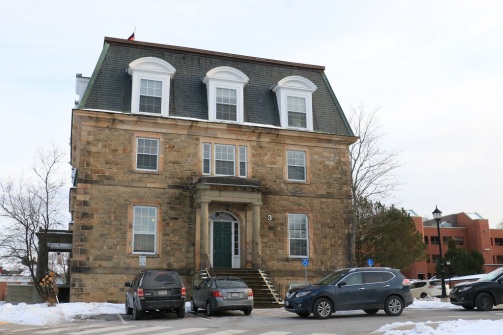 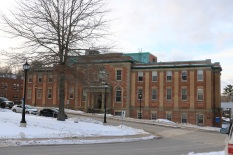 The moon had risen in the sky as we approached Moncton at 5 pm and located our hotel and our dinner.