We flew to Ottawa on Tuesday, November 26.  The purpose of our trip was to attend the opening of our daughter-in-law’s exhibition of her art series “Anonymous Woman.”  Carrie had arranged the solo show while she and our son were living in Ottawa.  Since then they have moved to Houston, Texas.  She flew back to Ottawa on Monday and had to hang all the art in the gallery on Wednesday.  We decided to fly out a few days early so as to assist her with preparing the exhibit since she is now six-months’ pregnant.

The Shenkman Art Center is a large facility with a performance theater, dance and music lesson studios, plus three art galleries.  There is a really nice man that manages the space and was very helpful as we hung the paintings. 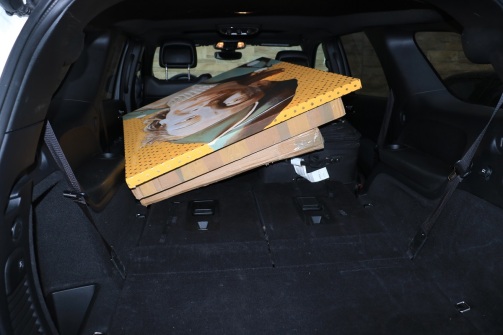 Carrie had stored one of her larger pieces with friends before they moved to Texas and shipped several others to a shop in Ottawa to be framed.  All the smaller works were brought with her in a big suitcase. 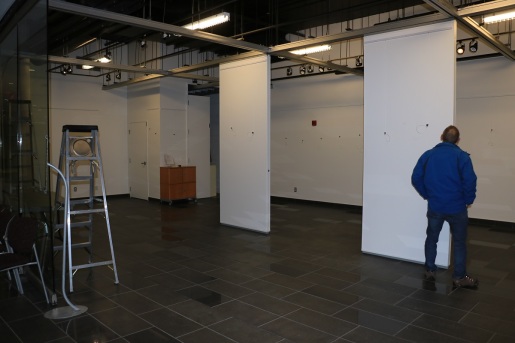 The space was quite intimate; which is why Carrie selected it for her show.  The center panels are movable/removable which helps the artists chose where to hang what. 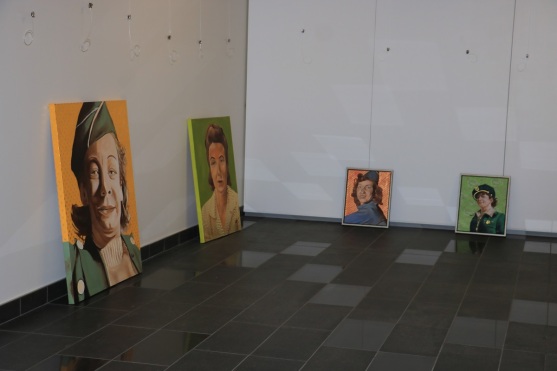 All the larger pieces were placed against the walls and moved around to find the best placement and the smaller ones were sorted on the floor. 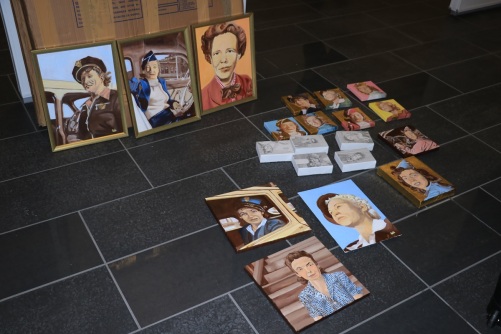 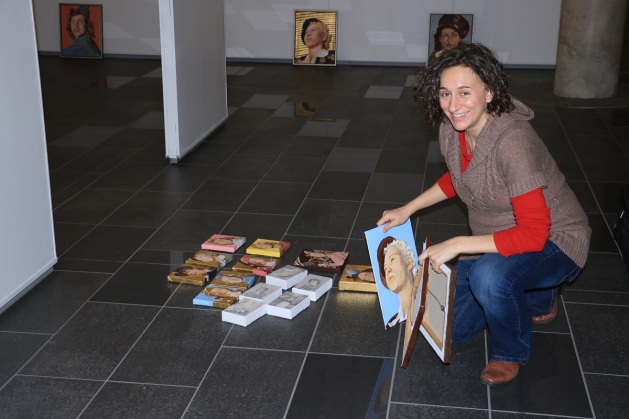 John is good at measuring and calculations so he was put in charge of figuring out where each piece was to go.  Carrie worked on some fixing of the labels and I carried things to wherever they were needed.  We got everything in place by mid-afternoon. 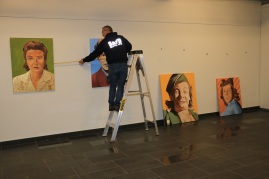 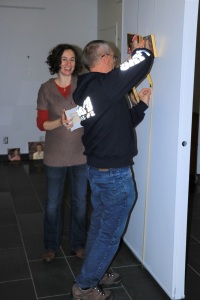 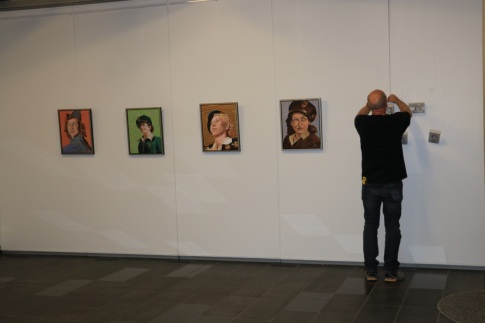 Mike from the Shenkman staff did the final adjusting to ensure the smaller pieces were hung straight and upright. 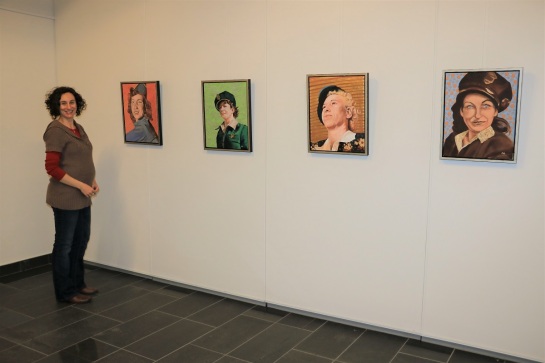 Carrie’s series is called “Anonymous Woman”  She had been inspired a few years ago by a series of black and white portraits of women from the 1940’s that she saw in the US National Archives.  The women were photographed because they were doing traditionally male jobs since the men were off at war.  There were five cabbies and two photographers.  None of the women were named.  Carrie wanted to honour these women and began her art series.  The paintings are acrylic on canvas and linen, but she also incorporated ‘feminine’ highlights of embroidery and gold leaf. 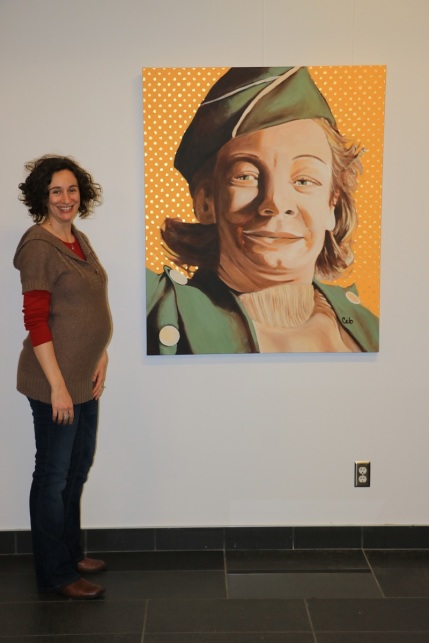 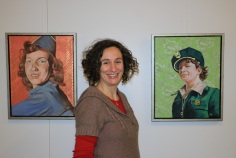 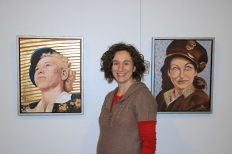 The four ‘ladies’ that started it all: Helen, Barbara, Ruth, and Dorothy ‘Dot.’  Since none of the women in the photographs had been named Carrie gave each one a name that was period appropriate and ‘fit’the woman. 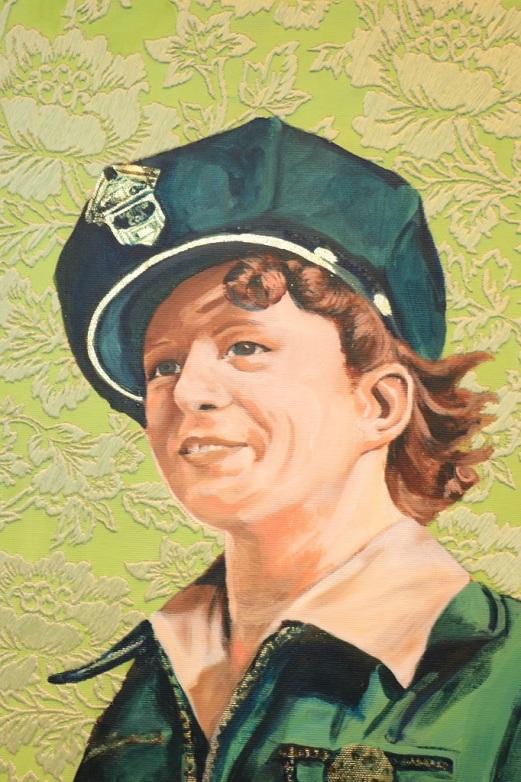 “Barbara” has over 200 hours of satin stitch emboirdery in the background wallpaper.  “Ruth” has a gold leaf striped background plus emboidery on her jacket. 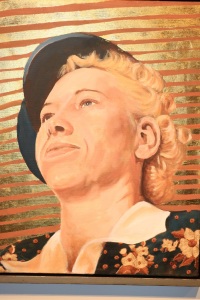 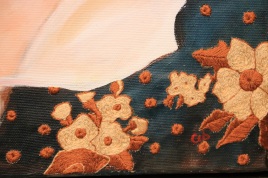 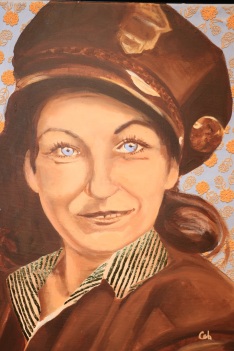 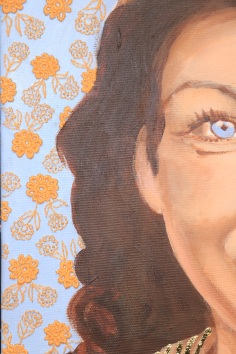 Carrie researched period wallpaper patterns so the background of each portrait would be correct.  “Dot’s” floral pattern is also embroidered and her shirt collar is gold leaf. 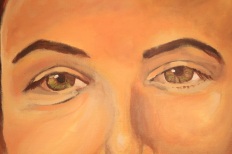 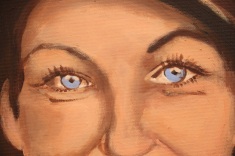 Even though the photographs that inspired the paintings were black and white Carrie selected colours for clothing, hair, skin tones and eyes for each woman.  She made several studies of each woman in different sizes and with differing backgrounds or gold leaf accents. 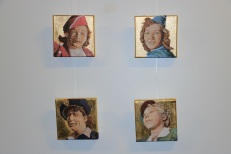 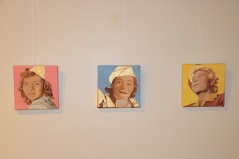 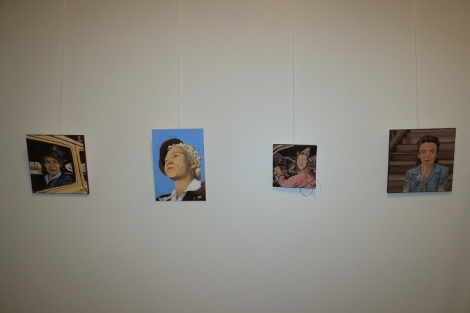 We were all very pleased with the overall display of the paintings in the space.  Carrie has created an awesome body of work to honour these unsung women from the past.  If you are interested in learning more about the paintings go to artiststrong.com and watch the short videos Carrie has posted. as well as many photos about the works as she created them.