The Giant’s Causeway is an area of approximately 40,000 interlocking basalt columns, the result of an ancient volcanic fissure eruption. In a 2005 poll, the Giant’s Causeway was named as the fourth greatest natural wonder in the United Kingdom.  Our children were 9 and 11 when we were first here and they loved clambering around on the columns.

The tops of the columns form stepping stones that lead from the foot of the cliff and disappear into the sea.  Most of the columns are hexagonal, although there are also some with four, five, seven or eight sides. The tallest are about 12 meters (39 ft) high, and the solidified lava in the cliffs is 28 meters (92 ft) thick in places.

Much of the Giant’s Causeway and Causeway Coast World Heritage Site is today owned and managed by the National Trust and it is one of the most popular tourist attractions in Northern Ireland. Access to the Giant’s Causeway is free of charge: it is not necessary to go via the visitors center, which charges a fee.

The design of the Visitor’s Center obviously mimics the columns of the Causeway.  This  building  was  not  here  in  1986.

I couldn’t remember the details of the legend we had been told on our first visit so I looked it up on the internet.  You just have to love Google!  “According to legend, the columns are the remains of a causeway built by a giant. The story goes that the Irish giant Fionn mac Cumhaill (Finn MacCool), from the Fenian Cycle of Gaelic mythology, was challenged to a fight by the Scottish giant Benandonner.  Fionn accepted the challenge and built the causeway across the North Channel so that the two giants could meet. In one version of the story, Fionn defeats Benandonner.  In another, Fionn hides from Benandonner when he realizes that his foe is much bigger than he is. Fionn’s wife, Oonagh, disguises Fionn as a baby and tucks him in a cradle. When Benandonner sees the size of the ‘baby’, he reckons that its father, Fionn, must be a giant among giants. He flees back to Scotland in fright, destroying the causeway behind him so that Fionn would be unable to chase him down. Across the sea, there are identical basalt columns (a part of the same ancient lava flow) at Fingal’s Cave on the Scottish isle of Staffa, and it is possible that the story was influenced by this.” 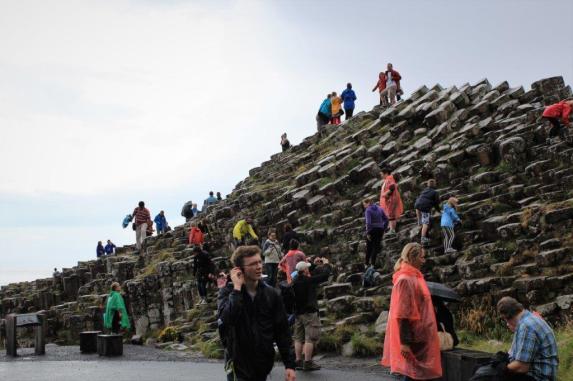 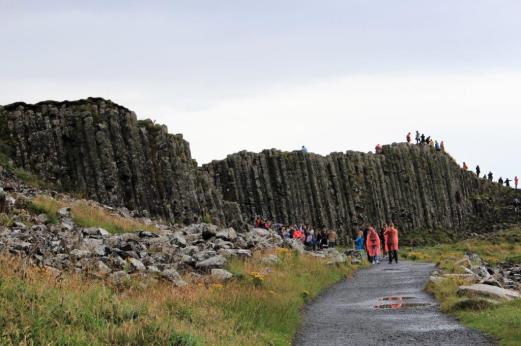 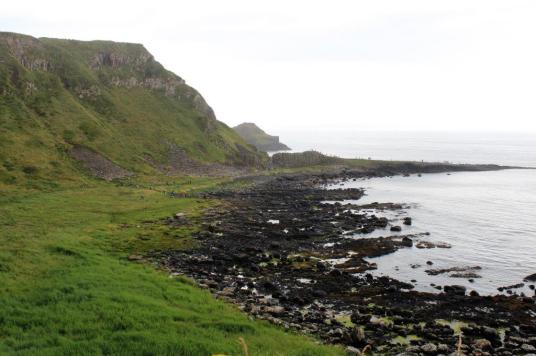 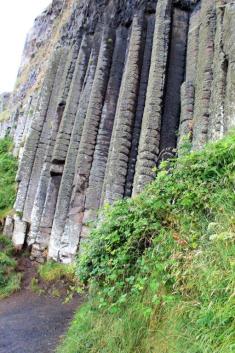 The pathway goes around the cove and over to the cliff side columns.  This big set is called the Pipe Organ. 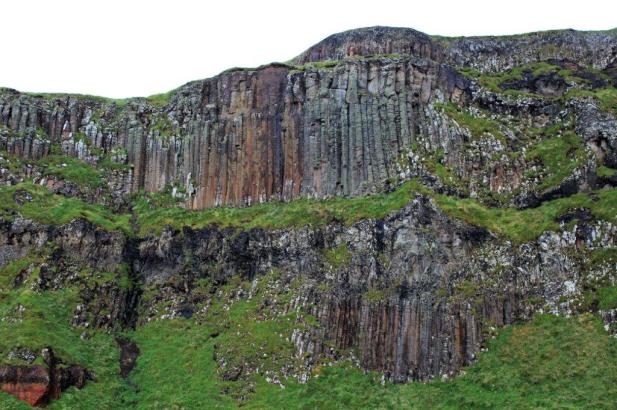 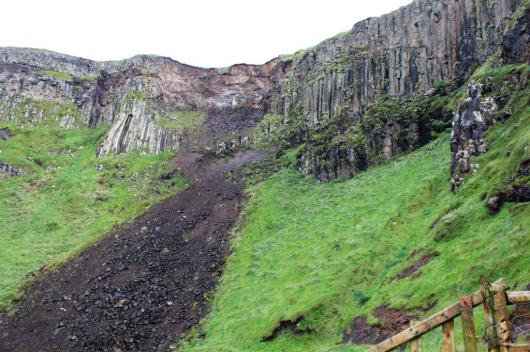 There was a bit of Irish mist, but the rain wasn’t too bad so we still enjoyed our walk around. It was really nice to be back at this amazing place. 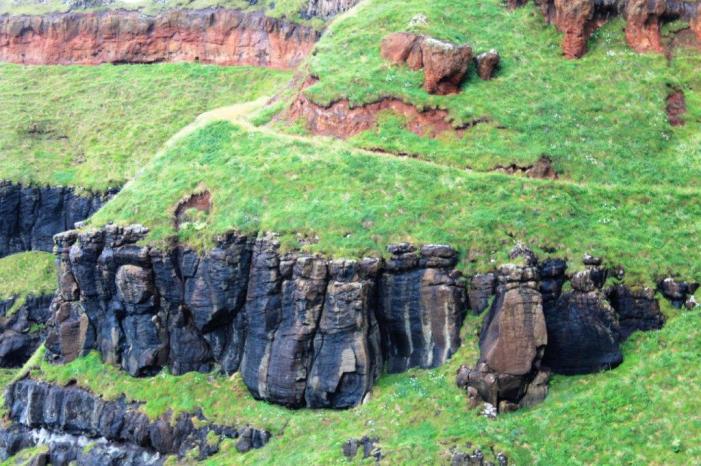 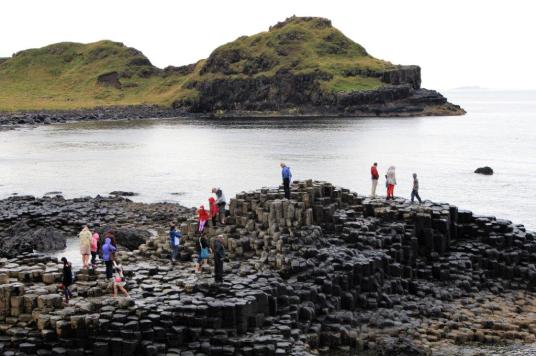 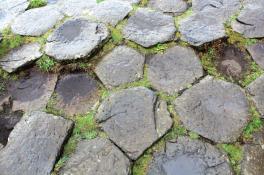 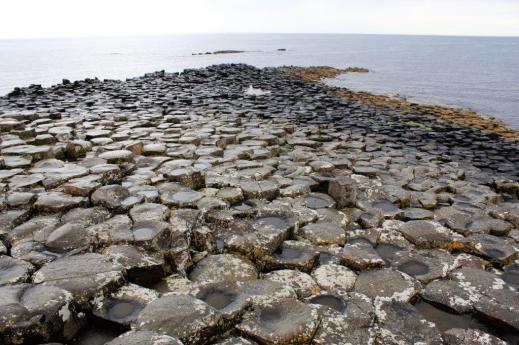 The causeway disappears into the North Sea. 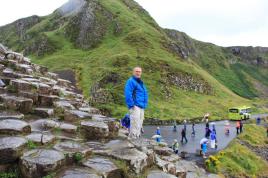 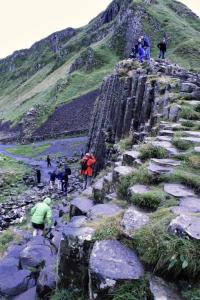 It was getting late by the time we were ready to leave and the sun was beginning to set.  It  cast  such  a pretty  yellow  shade. 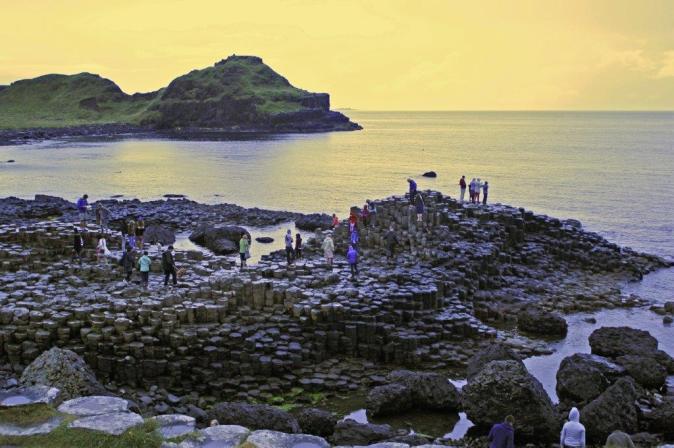 We arrived back at Clenahagn’s at 7 pm, had some supper and went to bed satisfied with our wonderful day in Northern Ireland.

The next day, July 30 was our last day.  Colin came over in the morning and we went into the town of Markethill and did some window shopping .  We returned to our apartment mid-afternoon. and had dinner in Clenaghan’s pub.  We checked out the next morning and drove to Belfast International Airport to catch our plane home, only to find were at the wrong airport!  By then we had returned our rental car and were stranded.  One of the Customer Service Volunteers hailed a taxi driven by a friend of his and told him our problem.  We were assured we would arrive at the Belfast City Airport in time to make our flight.  We did – just – and only because he drove like a mad fool to get us there.  Whew.

So, finally our trip to Scotland to attend our son’s July 22 wedding had ended.  We left home May 31; took a 17-day Baltic cruise, spent a week in London, and then toured around Scotland for over three weeks.  We attended the wedding and then spent a week in Northern Ireland before returning home July 30.  Now that was a great way to “go to a wedding!”

This is my final catch-up blog.  I have now written a blog series about all of the long trips, either by cruise ship or by road, that we have taken since we retired in 2007.  Hopefully, there will be some new journeys to write about in the future. Thanks for coming along.