Since we broke the critter fast yesterday with the sighting of the bear we were happy to see another animal today; although it was not something we expected in the wilds of northwestern BC.  Right up against the trees in the shadows was a black mule.  John barely caught a glimpse of it as we went by because it blended into its surroundings so well. 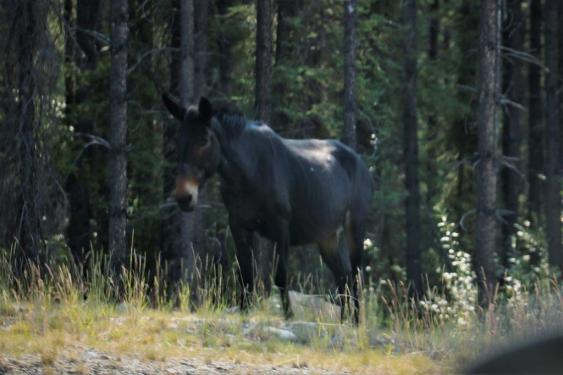 We pulled over at Blue Lakes because the water was so calm and the colours were so nice.  Spent a happy few minutes taking photographs. 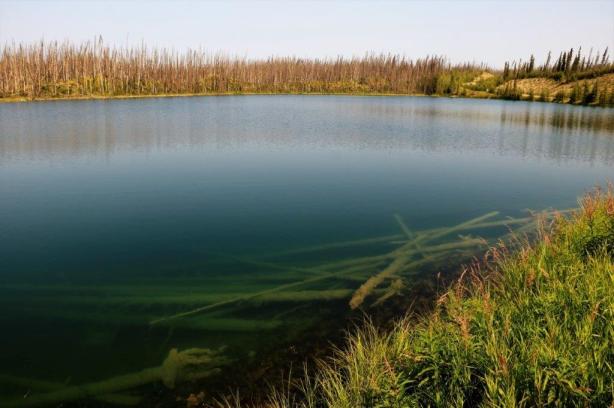 There are very few geocaches on the Cassiar-Stewart highway and we were unable to get the one at the Yukon-BC border because there was a construction zone and we had to follow a pilot car past the cache site.  There was a cache hidden off the road beside Lake of Good Hope, which we would barely have been able to see from the road.  We did a 330 degree switchback turn off the highway and down a steep, short gravel road to the lake.  It was gorgeous.  We found the cache too, but it took us about 25 minutes as the co-ordinates were off – a not uncommon occurrance in wilderness areas with lots of trees. 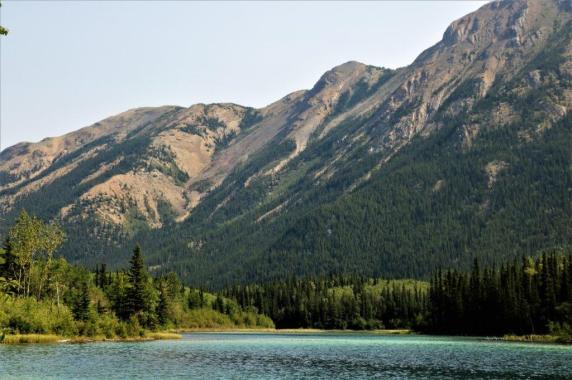 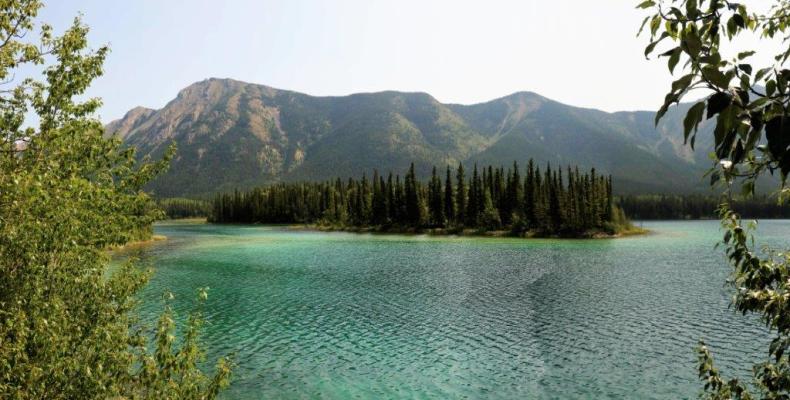 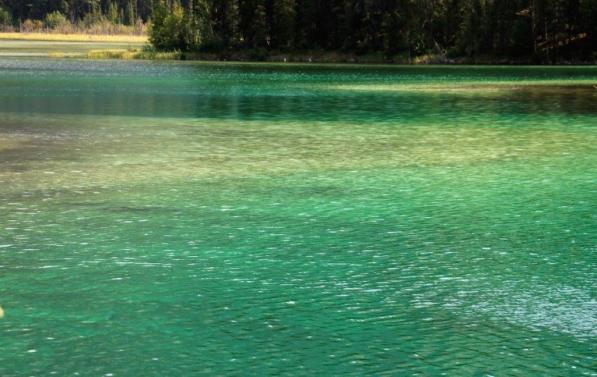 There was also a geocache hidden at Jade City.  There is a gift shop here and the family that owns it also has mining rights in the area for jade.  There is a TV series, like Ice Road Truckers or Yukon Gold, called Jade City that is currently filming its fifth season.  They film from May – October, but none of the crew were near the gift shop today.  There were huge boulders of jade outside and work stations with diamond-bit saws that are used to cut it.  The gift shop had lots of different carvings, jewelry, playing dice, chess sets, all kinds of things.  There was a gorgeous large jade globe, that was wired to light up.  Cost: $10,000.  92% of the world’s jade comes from Canada, primarily from BC.  Jade is translucent so if it is cut thin enough the light shines through.  It is also very hard. 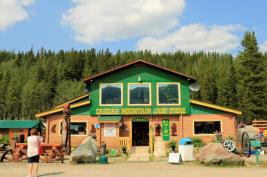 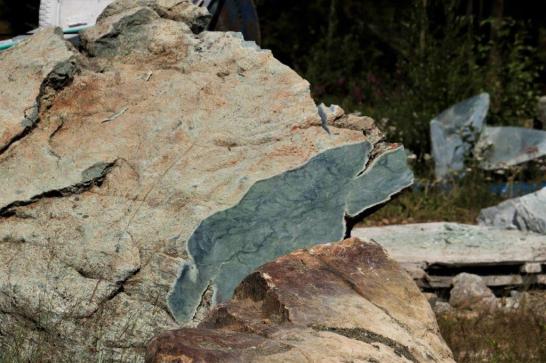 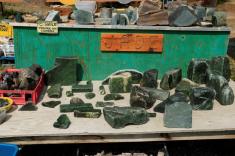 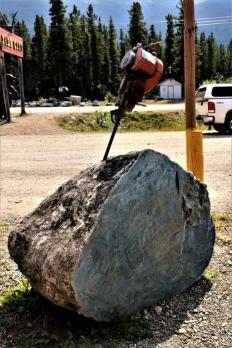 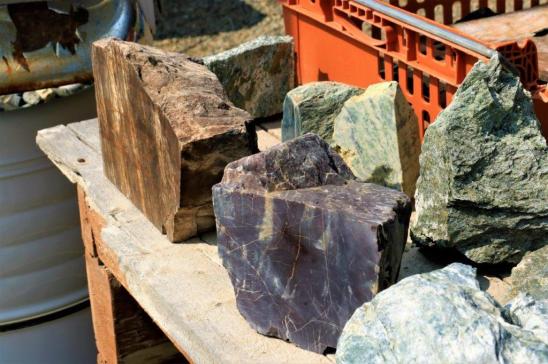 The pink stone is Dolomite.  The chess set they had in the gift shop was Dolomite and Jade alternating squares and the white men were made from Dolomite, with the black pieces being Jade.  I did not ask the price.  It was just gorgeous. 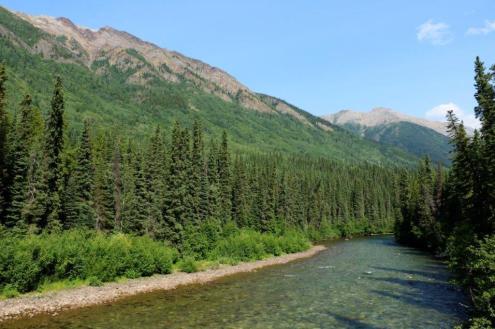 We were about 10 km (6 miles) from Dease Lake at 4 o’clock when we spotted a dog/wolf that had just crossed the road ahead of us.  John pulled up a bit further and by then we could tell it was a wolf and it was walking toward us along the bottom of the ditch.  We stopped and the wolf kept coming, came up out of the ditch, walked over to the truck and past the driver’s side, around the back and up my side slowly ambling along and looking at us.  It did not appear afraid, just curious.  We didn’t want it to get too curious so John started the truck and inched forward.  The wolf started, sidled off to the side and watched from the middle of the road as we drove away.  We were absolutely stoked!  What an awesome experience.  I hope the animal had not been fed and was looking for handouts, and that it was just curious.  When I checked my photos I saw that it had one porcupine quill in it’s upper lip.  Maybe it was looking for someone with tweezers to get it out.  But, even if we had noticed that at the time we would never be THAT stupid! 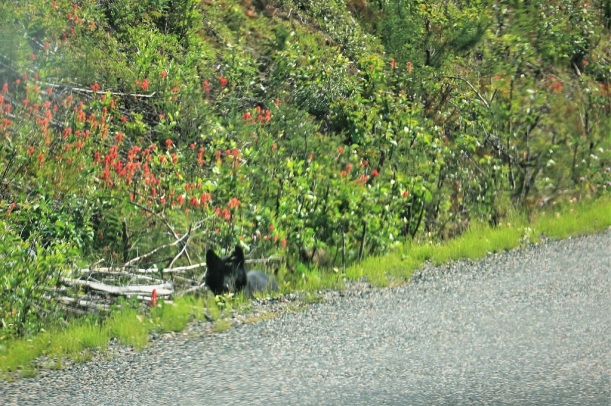 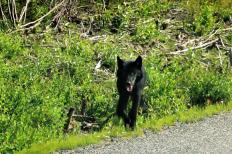 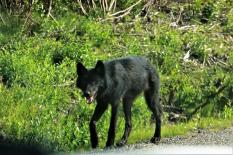 I cropped this shot to just show his head and his eyes.  It is easy to see the porcupine quill when it is cropped closer. We never noticed it at all when we were taking the photos.

John used my camera to snap these photos as the wolf was on his side of the truck and I couldn’t get any pictures of it from my side.

The red you see in the photo below is the reflection of my shirt on the closed window when the wolf walked past my side of the truck. 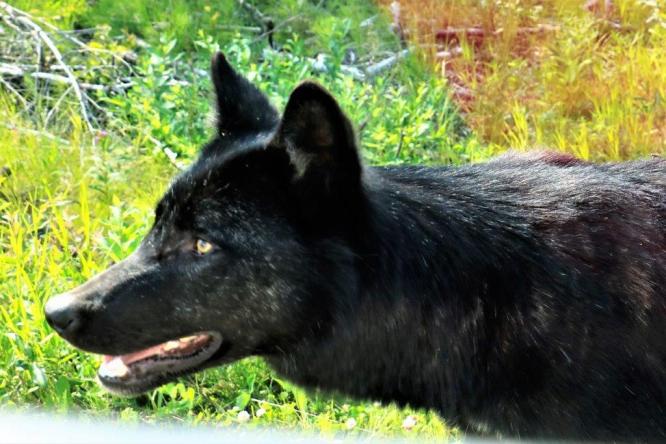 As we were driving away it almost looks like it was asking why were we leaving.  It walked out into the middle of the road and headed in our direction.  Don’t know if it planned to follow us or not, but the speed difference between a wolf and a pickup truck is considerable.  This just made our day!

At Dease Lake we settled into our hotel room and then went to the pizza shop for some dinner.  There was a fellow there from Ontario that was doing a motorcycle trip in the north (hoping to go up to Tuktoyaktuk) and a couple from southern California who were driving to through BC and the Yukon to Alaska.  We all had a great chat while we were eating.  The fellow from California was commenting to John about how different the people were up here.  Everyone talks to you, he said, and shares stories and tales of their trips.  He is just not used to so much friendliness from strangers, he said.  He and his wife both loved the atmosphere they had been experiencing  in Canada so far.

We noticed as well that the people in the north were very friendly and liked to hear where you were from and where you had been and where you were going.  Things are more laid back when the nearest town is 6-7 hours drive away and is likely even smaller than the one you live in.  There are very few large communities in the north.  We have loved our time up here.