OH MY GOODNESS! What an incredibly beautiful day!

We left our hotel in Dawson City at 8:30 and as we were driving out of the city, past the 10 km of dredge tailings on either side of the road, the car in front of us – that was traveling quickly – startled a cow moose and her calf. The car braked, but by then the moose was on the fun for the bush.  I only managed to catch two photos as they ran away. 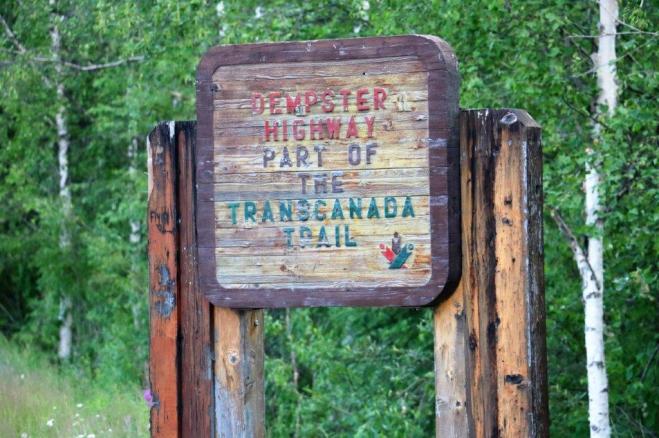 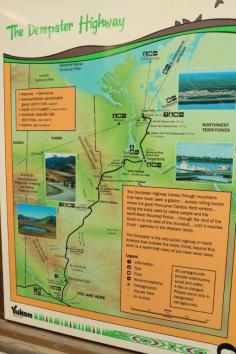 Our first few kilometers were somewhat slower than we liked.  We were behind a car that was behind a big water or oil truck, so we drove in their dust, literally.

The truck, very kindly, pulled off in the first wide spot it came to and then we were off.  The Dempster has two road conditions: dry and dusty OR wet and slippery.  The road has a notorious reputation with many horror stories of getting stuck in mud, or sliding off the road, or driving through huge ruts and rocks that eat your tires.  We have driven a lot of forestry roads, which can be very rocky and rugged, so we found the Dempster to be pretty good in comparison. 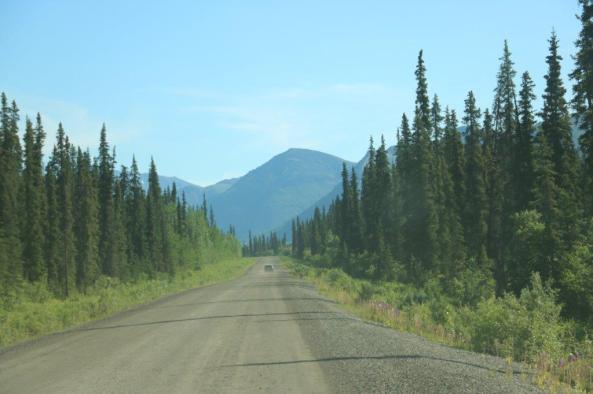 All we had ever heard about the road, other than the scary tales of vehicle disasters was the it was a nice, scenic drive.  That is an incredible understatement.  It is 369 km (229 miles) from Mile 0 of the Dempster to Eagle Plains (just over half way). The first 250 km were gorgeous, with every bend and corner revealing another beautiful mountain, or open valley.

We had been given a travelogue booklet by the lady at the Northwest Territories Visitor’s Center in Dawson City and it contained all the points of interest or geological information by the kilometer road markers.  It was a very handy little book to have.

This blog will be very full of photographs of scenery.  There are no towns or buildings other than road maintenance camps between the beginning of the Dempster and Eagle Plains. 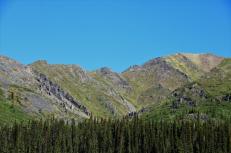 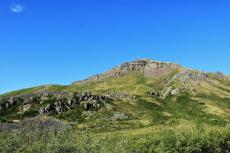 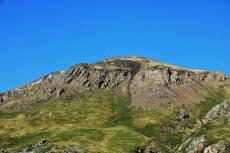 71 km (45 miles) up the road is Tombstone Territorial Park.  The highway travels for 70 km through the park.  Tombstone protects 2,200 square kilomters of the Ogilvie Mountains and the Blackstone Uplands; which are two of the seven ecoregions that the Dempster passes through before it reaches the end of the road at Inuvik.

There are not many geocaches hidden along the Dempster Highway between the beginning and end of the road – only about 6-7; the first one of which was hidden off one of the hiking trails in Tombstone.

There was this lovely lichen growing all over the hillsides along the trail. 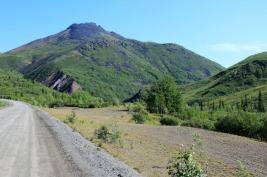 This is the view from the Tombstone Range Viewpoint. 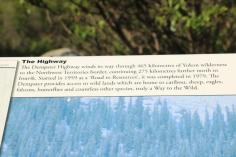 There’s that word – Beringia – again.  There was a vast area of this northern region that was not covered by glacier ice and therefore  has very different geology, topography and plants than that which was carved by the glaciers.  It is called Beringia. 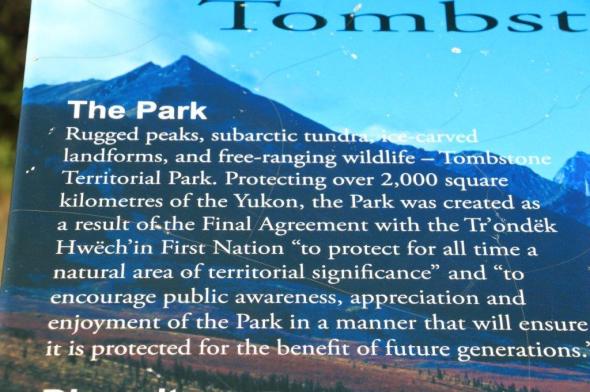 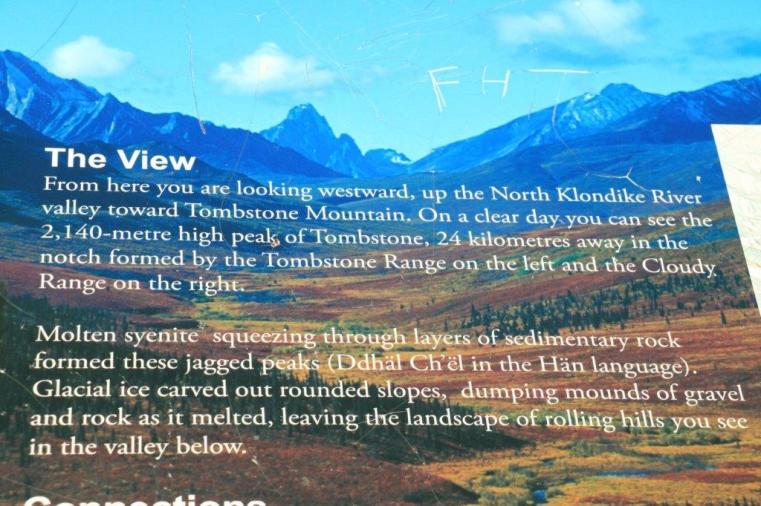 While I was taking photos from the viewpoint, John crossed the road, climbed up the sloping side of this bluff and found another geocache that was hidden 25-30 meters away. 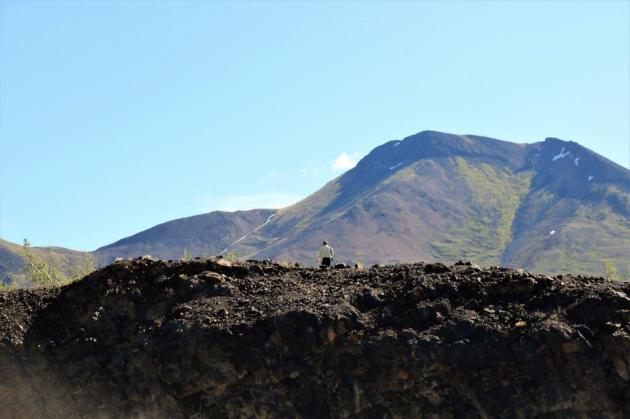 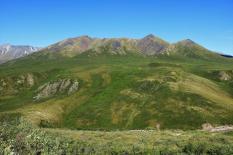 A kilometer or so up a side road took us to a microwave tower, another cache, and a lovely view of Goldensides Mountain.

Between km 78 and 158 we drove through the Blackstone Uplands 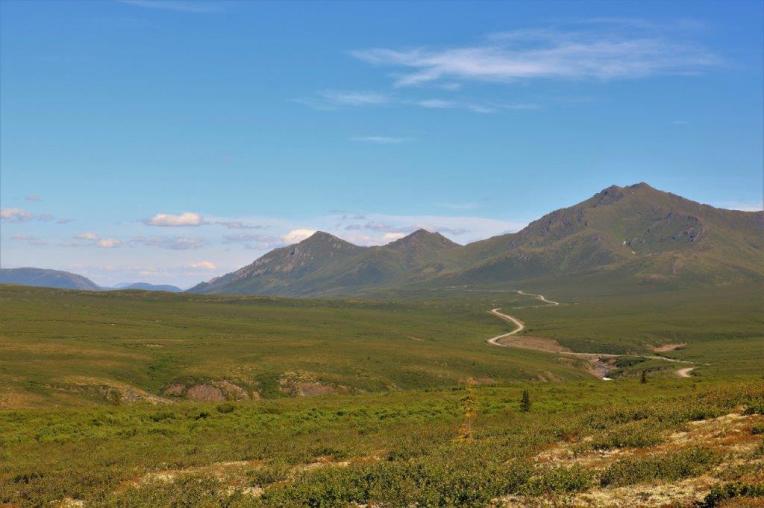 The viewscape is just immense.  I often comment as we drive through the Rockies along the Trans-Canada Highway that Canada has a tremendous amount of space and open, forested countryside.  When you come up to the Yukon and the Northwest Territories and drive for hours with no towns, very few vehicles and open views like these you understand how true that is! We are truly blessed. 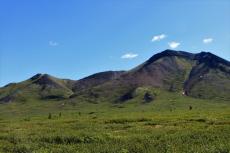 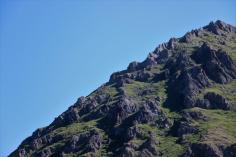 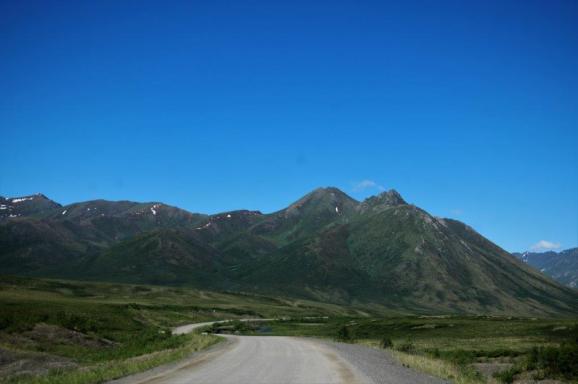 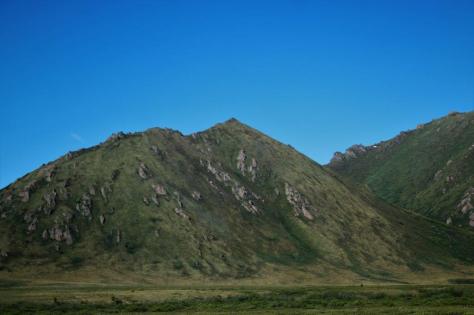 Moose are not abundant in the Blackstone Uplands but they are sometimes seen feeding in this small lake.  The lake is also a favourite place for waterfowl.  There were several kinds of duck-type birds swimming on the far shore as well as three Tundra Swans.  Even with my zoom lens they were too far away to photograph.  About 150 bird species have been seen in the area.

Chapman Lake is at km 116 and is the largest lake on the Dempster Highway. 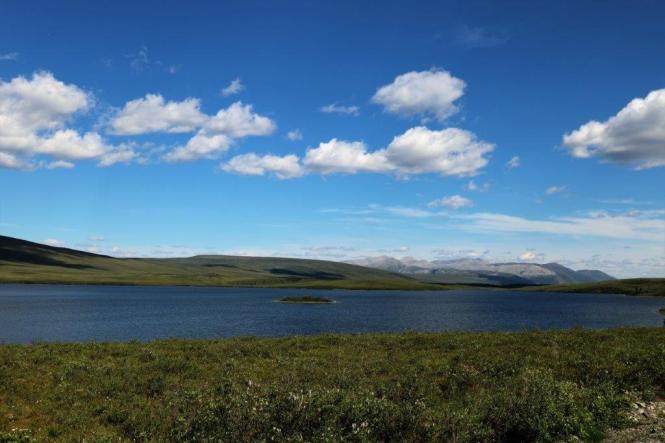 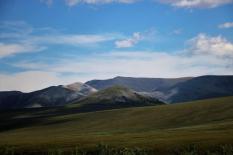 Aside from the establishment of the Dempster Highway, this alpine tundra environment has probably changed very little over the past 100,000 years or more.  What we saw today is likely the same view the first people would have had as they roamed eastword from Asia, across the Bering land bridge, and into what is now the interior of Alaska, and northwestern Yukon.

This area is on the migration route of the Woodland Caribou.  The animals are all up at the Bering Sea at this time of year having calves and mating for next year, but you can see the trails (faint white lines) they travel on the side of the rocky scree of this mountainside.

Personally, I think it would just be easier to follow the road…

Red Creek and Sulpher Springs is at km 168 and the beginning of the Ogilvie River ecoregion. The brilliant orange-brown stain in the mud and the surrounding vegetation, for the next 25 kilometers, is the high parts of calcium, magnesium, bicarbonate, sulfate, hydrogen sulfide, sodium and chlorine in the water.  Some of it is highly acidic as well.  Don’t drink the water. 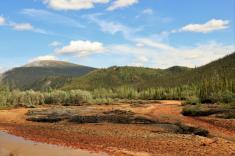 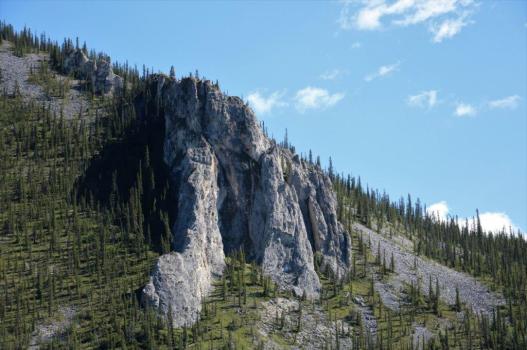 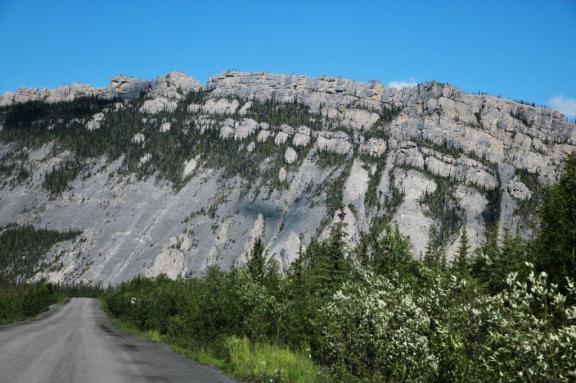 Sapper Hill was named in 1971 in honour of the 3rd Royal Canadian Engineers who built the Ogilvie River bridge.  “Sapper” is a nickname for an army engineer.

We stopped at the Engineer Creek Campground and had some lunch. 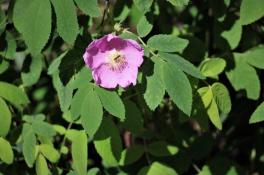 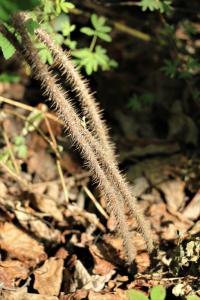 The wild roses are abundant here, but the stems are not at all friendly.  Late June and early July is the best time to see the wildflowers.

The thick, but spindly trees are called ‘drunken’ boreal forest.  Since they are growing on the thin layer of dirt above the permafrost they are constantly shifting with the freezing and thawing of the soil that holds their shallow roots. 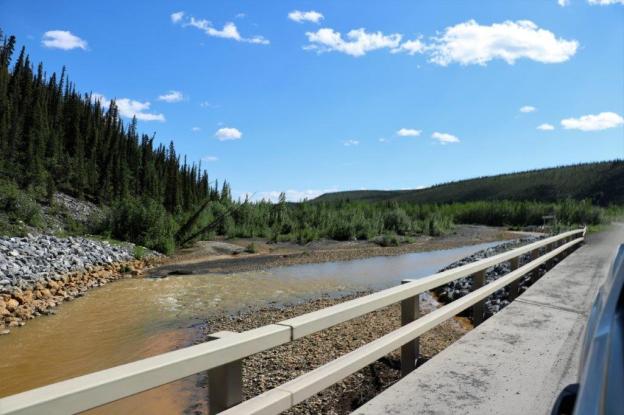 These spires, towers, and spikes are called tors.  They are the product of frost shattering.  Water seeps into cracks and joints in the hard bedrock, then freezes and expands, forcing the rock apart until it falls down the slope.  The larger, more solid blocks remain.

All of these photos are posted here in the order I took them during the day.  The variety of mountains and how quickly they change from one type to another is amazing.

There is a pullout at km 221, called Elephant Rock.  If we did not have our handy-dandy little travelogue booklet we would never have stopped here.  There is a tor on a distant mountain ridge that has the shape, complete with trunk, of an elephant.  You have to know where to look or you would never notice it.  We could see it very clearly with the binoculars. The photos, even with maximum zoom, had to be cropped quite a bit.

The Eagle Plain Plateau is the last of the ecoregions we drove through today.  At the top of seven-mile hill (which is seven miles long and steep) is the Ogilvie-Peel viewpoint.  We pulled into an unofficial pullout and looked out over the vast burn from the July 1991 fire that descimated 5,500 hectares of forest and was only one of many fires in the region.  This burn was on both sides of the road for many, many kilometers.

From the Ogilive viewpoint you can see the northern fringe of the Ogilivie Mountains and the valley of the Ogilvie and Peel rivers, which continues for 180 kilometers eastward.

This car and trailer were parked at the Ogilvie viewpoint.  Somebody needs a car wash. 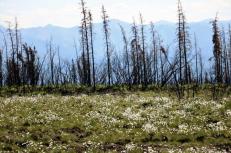 These little white flowers covered the hillside. The last 100 or so kilometers before we reach Eagle Plains at 5 pm was primarily forests on both sides of the road.  All the lovely mountains were left behind.  As I said, OH MY GOODNESS!  what a glorious day.