At 3 am I looked out the hotel window in Fort Nelson and this is how light it was.

We left Fort Nelson at 8:30 and arrived in Watson Lake at 6:45.  The driving time is about 7 hours.  All the additional time was due to scenic stops for photographs, critters, and geocaches.  My goodness, what a day!  I think we topped the all-time animal count outside of a zoo or animal park.  We saw 8 bears, 1 elk (as it disappeared into the trees),15 Stone sheep, plus 3 or 4 kids, and 32 or more bison, plus 8 calves. We were blessed with a lovely day; better than the weatherman promised.  And since the drive was very scenic we had a beautiful, allbeit, long drive.

Remember, this the Alaska Highway built in 1942 in just over eight months.  They moved a lot of dirt and rock.  Also when they scraped the top of the permafrost off the water in the soil melted and turned everything to mud so deep it would swallow a bulldozer.  They learned to lay a corduroy layer (logs and branches) as a base.  Much of the highway still has this base.  They built 8 miles of road per day, seven days a week, working double shifts during the long daylight hours of summer.

This is not dust or smoke in the photo on the left; it is a splattered bug on the windshield.

We had been driving for an hour or so and suddenly a police car with sirens and lights came by.  We wondered where on earth it would have come from (Fort Nelson, we guess) and where it was going.  We didn’t have long to wait.  About 10 minutes later we caught up to the emergency; a burned up car.  The couple had the presence of mind to unhitch their trailer when the car started to burn, and they were uninjured, but there was nothing left of their little car.  I didn’t get a full photo of the trailer, but their car was much to small to be towing it.

We were arriving at the same stopping places as a few other motorists and we would often chat for a bit.  Everyone we spoke to mentioned how small the car was to be towing the trailer.  One couple told us that the people had tried to drive up the hill earlier and were unable to make it so they had turned around and were coming back down when the fire started – probably brakes.  Poor people; That would be a nightmare to sort out, with vehicle registration, loss of personal affects in the car, towing cost for the trailer, getting a new vehicle, staying somewhere.  The list is endless.  So sad. 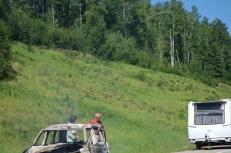 There are some very long steep hills on the Alaska Highway.  When it first opened for the military in 1942 there were some 90 degree corners and 25% grade hills.  Over the years things have been smoothed out and slightly re-routed to alleviate them, but there were some long climbs. (The current Alaska Highway is about 44 miles shorter than the original due to the upgrades and improvements.) 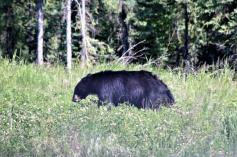 These two bears must be litter mates as they were together which is rare to see with bears.

We had spoken to a couple of ladies in Yellowknife that had come the day before along the route we were driving.  They said we MUST stop at Tetsa River Lodge for the best cinnamon buns they have ever had.  We did, and we agree.  They were amazing cinnamon buns. 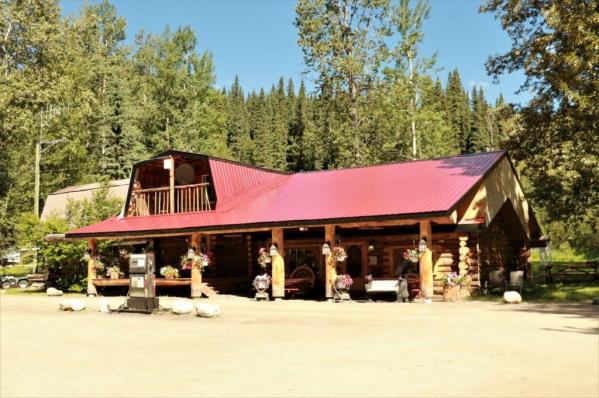 There was a geocache hidden at Summit Lake Falls.  There was no signage or anything to indicate a waterfall nearby.  We parked on a wide spot off the road and went looking for the indicated trail.  It wasn’t by any means an obvious path at the roadside, but there was a good trail to follow the short distance to the cache.  We never would have know this pretty little falls existed except for geocaching.  This is quite a common occurance when travelling around. 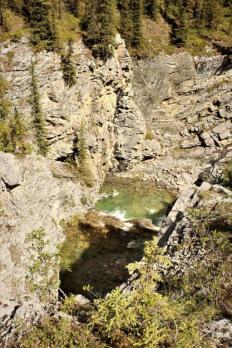 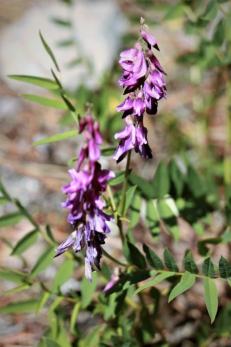 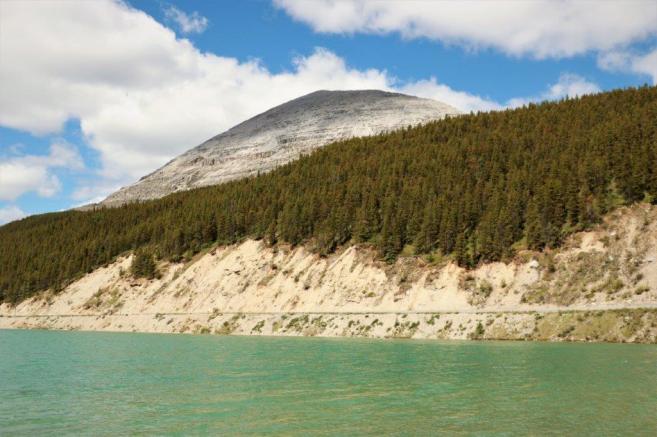 There were four Hoodoos (eroded columns where the cap on top is harder rock and the sandstone layer underneath erodes) on a distant mountainside.  Unless you are in the habit, as we are, of stopping at any pullout with a placard, you would never notice them. There was also an earthcache here which was an added incentive. 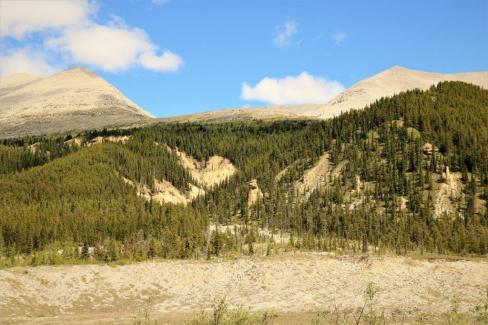 The river flowing through this valley was glacier green.  At bit too far away to see well though.

This area, below, is the called Beaverdam, for obvious reasons. 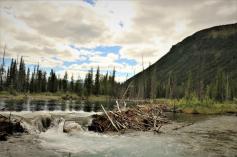 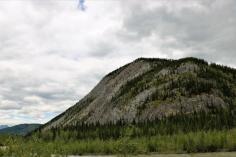 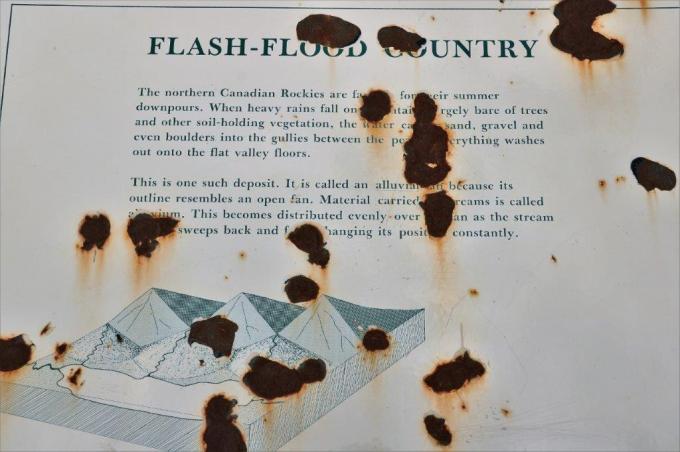 This couple had pulled over just for a few minutes and liked the view so much they stayed for lunch and a rest. 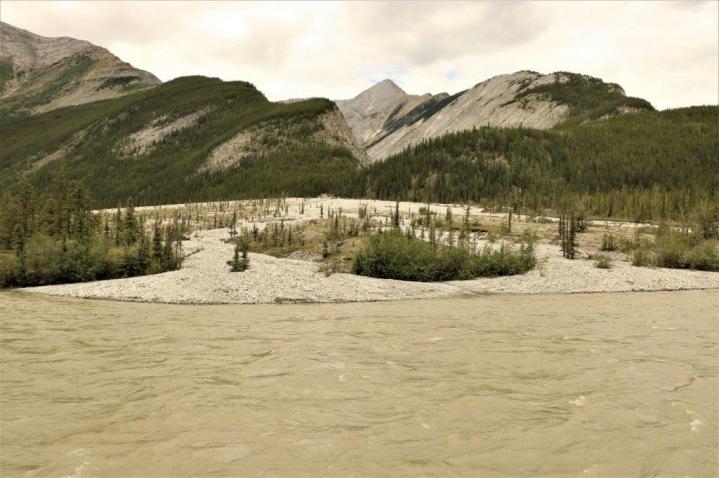 All of the rivers are running high and are brown they are carrying so much dirt along.  There were two thin waterfalls coming down the mountain on the opposite side of the road. 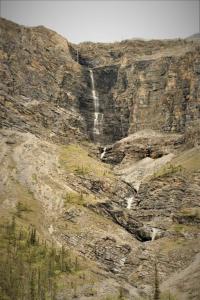 We don’t know what this plant is called.  John wants to call it Arctic Cotton.  The blossoms are gone and this is the seed fluff opening. 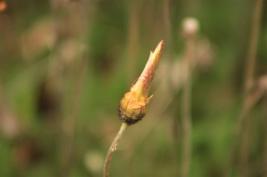 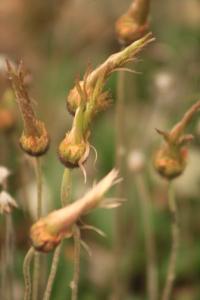 This blog encompasses about half of our day on June 28.  I will get some more done as soon as I can.