It was interesting this morning to talk a bit with the lady in charge of the breakfast at the hotel.  She is a young woman from the Philippines.  How weird after we learned just yesterday that there was a large Filippino population in Yellowknife.  She has been here 5 years and arrived in February (Yikes!  Temperature shock!) directly from the Philippines.  There are agents in her country that find job placements for people wanting to come to Canada.  And, if you will live and work in the north for a minimum of 6 months you can fast track to a Canadian Permanent Residence status.  She works two jobs and had to spend about $10,000 to come here.  She has only been back home once since she arrived but hopes to go again in two years.

We were feeling a bit lazy so we lingered in our room awhile after breakfast and didn’t leave the hotel until almost 11:30.  The web page for the Diamond Center said it was open today from 10-6.  They lied.  When we drove to the location it was closed. 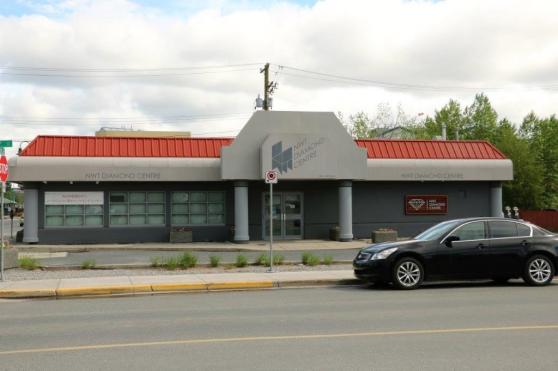 We had no real plans for the day except to tour the Legislative Assembly Building at 1:30 so we decided to wander around downtown and find a few geocaches.

Yellowknife is an interesting city.  I find the overall look to be somewhat industrial – lots of simple square boxes.  Yet there is the most curious blend of building purposes.  Take the photo below:  there is an office building, a Mormon Church, a private residence and a high rise tower side by side on a main downtown commercial street.

We enjoyed the walk about, found a few caches and were greeted by several people walking by.  While we were taking photos of this mural a lady sitting on her front steps across the street at the end of the block hollered over and asked us what we were looking for.  We told her we were just taking a photo of the mural.  She then proceeded to tell us about a few things to see in town and a good place to eat.

While we were looking for cache two men and a woman walked by, stopped and asked if we were from Yellowknife.  When we told them no the young man said where he was from and encouraged us to go there and enjoy some great fishing.  We have found this to be a very open, friendly place. 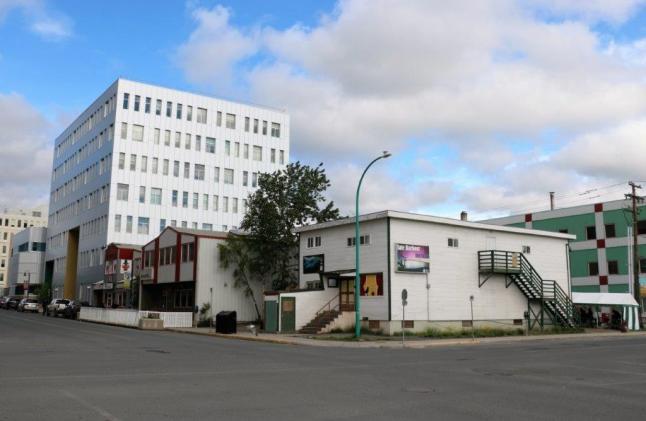 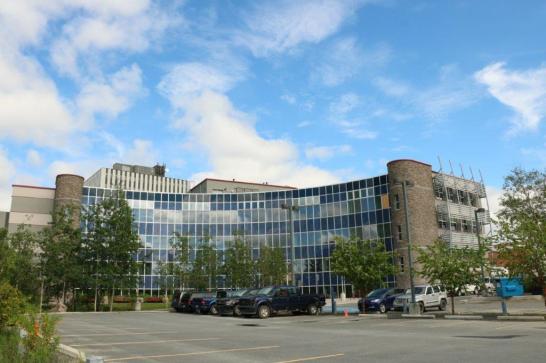 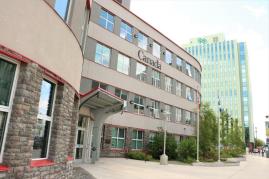 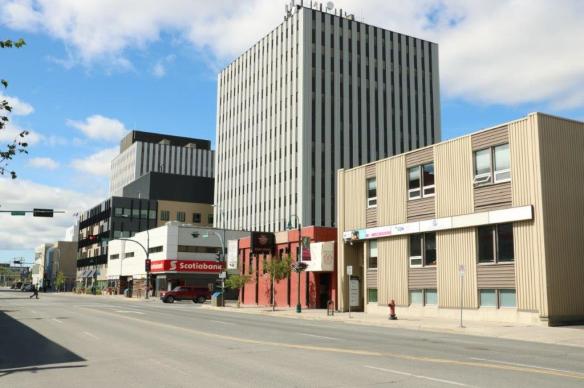 We saw several of the painted utilities boxes around the city today. 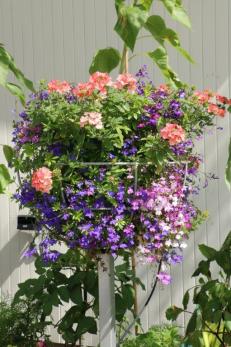 At one or so we made our way back to the truck, had our pb & j sandwich lunch and drove over the Legislative Assembly Building for the tour.

The Northwest Territories has a Consensus Government. They have no political parties.  There are 33 communities in the Territories and 19 districts.  After people are elected in each district they have a vote among themselves to elect a Premier, a Speaker of the House, and six Cabinet Ministers.  The remaining 11 members become the ‘unofficial’ opposition who ask questions and for clarification, etc. when bills are presented.

Our guide was a young university student home for the summer (she attends University in Nova Scotia) and she will do all the public and private tours.  Her name was Mackenzie and she was born in Yellowknife.  She did an excellent job and filled my brain with all kinds of trivia about the Northwest Territories and all the symbolism in the objects, the rooms and the building.  Tons and tons of interesting stuff I won’t bore you with. (Well, maybe a little.) 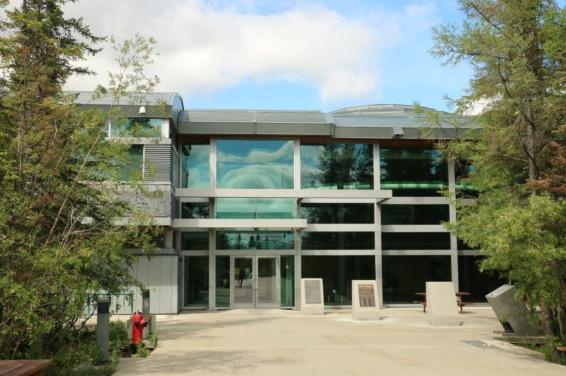 The building sits amidst the trees near the shore of Frame Lake just a short distance from the city center.  If you don’t slow down when driving past the entrance you would never notice the building.  It sits right among the trees and much effort was done to not disturb the surrounding nature.  The two photos below are photographs of a picture in a brochure showing the building from the air and a postcard we were given after the tour.  You can see how close the forest is to the building and how well it nestles in it’s surroundings. 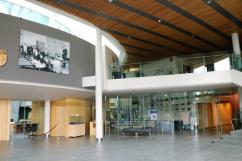 Unfortunately the reflections in the glass make for sad photos. 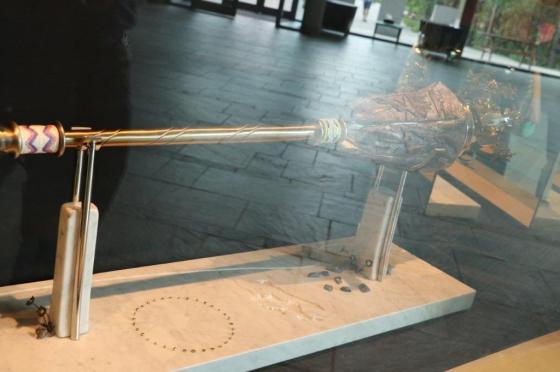 It is hard to see the lovely snowflake crown atop the mace due to the mirrored reflection.  The mirror is there to show the inside of the crown which contains a gold orb for the midnight sun, the circle of life and the world.  On top of the orb is a silver crosspiece that together forms an ulu (hide knife), a tipi, and a house representing the cultures of the territory – Inuvialuit (Inuit), Dene/Metis (First Nations) and the many non-aboriginal people.  On top of the crosspiece is a 1.31 carat northern diamond. 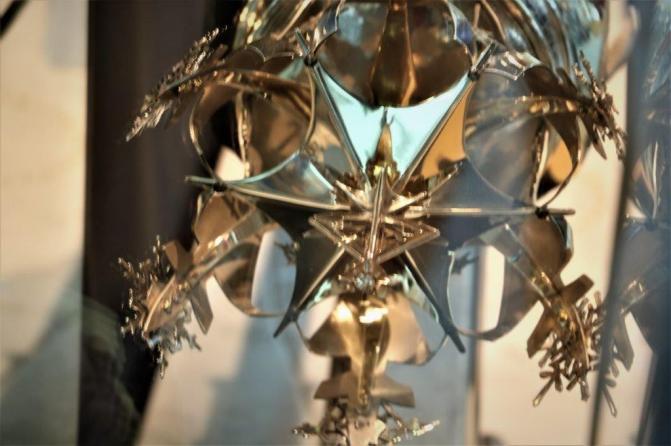 If you look closely near the lower center of the photo above you can make out the diamond.   The circle of gold nuggets below sit on the base upon which the mace sits and there is one gold nugget for each community in the territory. 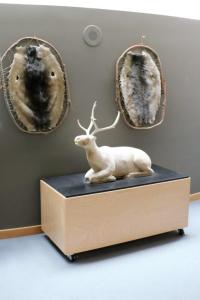 This caribou is carved from a single piece of very old (over 100 years) whale bone.  The antlers are carved of real antlers.

This is a discussion chamber.  There are no records kept of what is said here and open discussions about issues and laws take place weekly.  There are no ministers, or Speaker, or Premier, in this room; everyone is equal and everyone has a voice.  The motto of the Northwest Territories is: “One land, many voices.”  This is called “The room without secrets.”  Partially due to the openness of the discussions and partly due to the acoustics which are so good that two people whispering on one side of the room can be heard everywhere.

The paintings on the back wall are all by Group of Seven artist, A. Y. Jackson.  This is the largest collection of his work on display in the world and only members of the Legislature, staff and people on tour can see them. They were commissioned by territory and one of the mining companies. I took a photo of everyone of them! 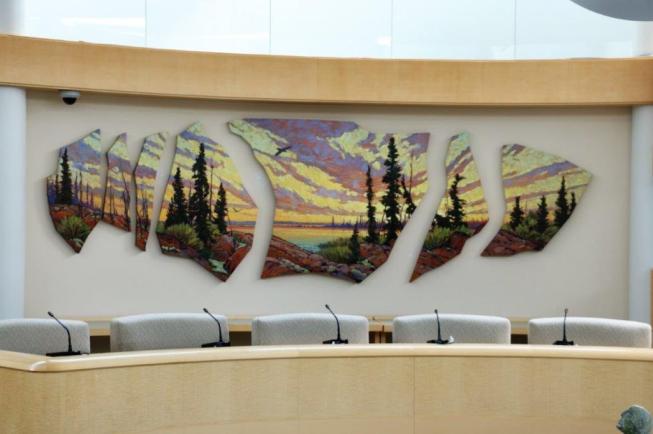 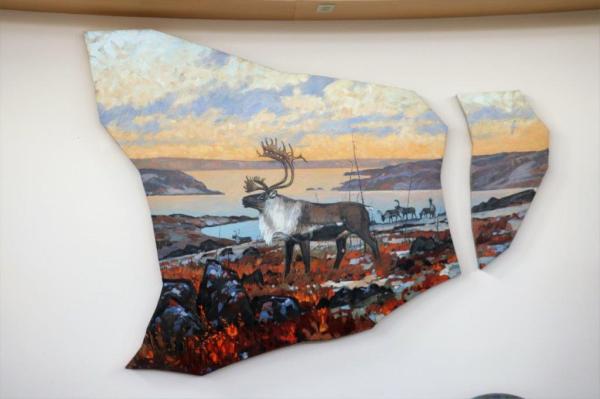 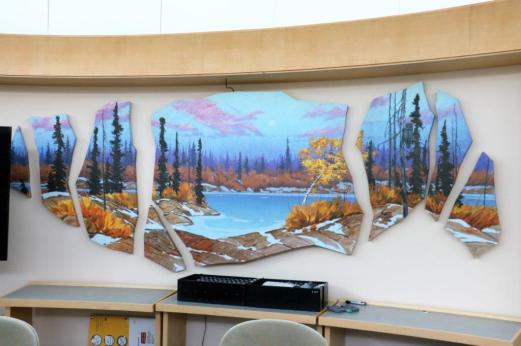 These three pieces of art are by a BC artist and repesent the past, present and future of the territory.  We were given the explanations of each piece but I won’t take the time to write it all down here.

No one knows exactly what this sculpture is made of – it is assumed to be soapstone – nor do they know it’s name, or it’s creator.  It sits in the middle of the chamber in the hope that someday someone may come in and recognize it. 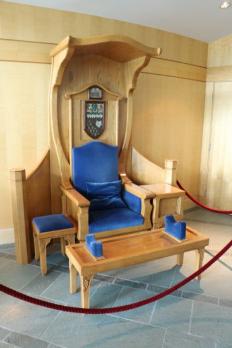 For many years the Legislature traveled to various parts of the territory to conduct it’s business. There was no central Assembly building.  Legislative business was conducted in school auditoriums and hotel conference rooms in different communities every year.  The chair above was for the Speaker of the House and was given to the Northwest Territories by the Federal government in Ottawa.  It can be completely dis-assembled to make it easier to move and transport by canoe or snow sled to the various communities.  Now that there is a central building it is no longer used.

The chamber of the House of the Northwest Territories. The large panel behind the Speaker’s chair is made of zinc and shows a topographical representation of the land from the air.  There are glass panels all around the dome near the roof to let in light – of course – but also they are works of art. The glass is re-cycled car windshields that have been sand blasted to show the northern ice in all its seasons.  As you look around the dome the etching displays the solid icy coastline of winter, that begins to break up in spring, is full of small chunks and streams in summer, and begins to solidify again in the fall.  You can’t see it very well, but it was really lovely.

The territorial flower – The Mountain Avens.  The tree is the Tamarack (or Larch), Their fish is the Arctic Grayling and the bird is the Gryfalcon.  The official gemstone is, of course, the diamond and the mineral emblem, also obviously, is gold. The even have a red, green and yellow tartan.

We had some nice chats with Mackenzie and Robert the security guard before we left Assembly building. 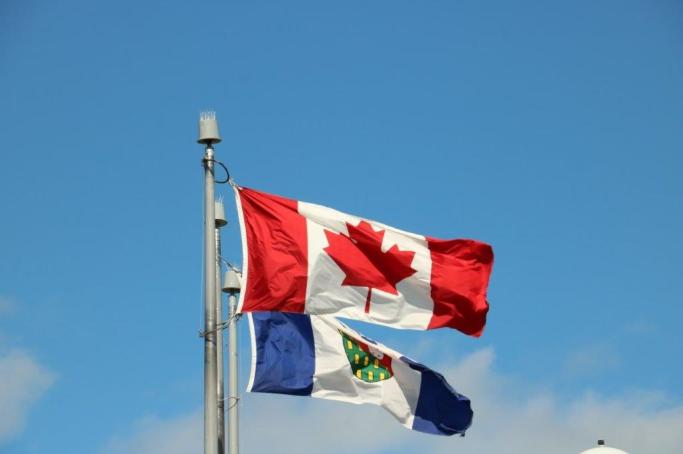 There are quite a few geocaches hidden in the area around the Assembly building and the nearby Prince of Wales Heritage Center. We took the time to find a couple of them.

We had no other plans for our final day here.  It was a beautiful sunny day so we decided to drive some of the Ingraham Trail.  The Trail is also called the “Road to the Cottages” or “Diefenbacher’s Dream.”  Officially it is Highway 4 but is popularly called the Ingraham Trail, after Vic Ingraham, a pioneer business man from the 30’s and 40’s.  The road extends from Yellowknife to Tibbitt Lake, approximately 70 km (43 mi) east of Yellowknife.  It was built in the mid-1960s as the first leg of a ‘road to resources’ with the original intention of circulating Great Slave Lake and connecting the mining districts of the north with Saskatchewan.  When Prime Minister Diefenbacher was defeated in the federal election an immediate halt was called to the road construction and it literally, just stops dead at Tibbit Lake.  There have never been any new plans to continue it. 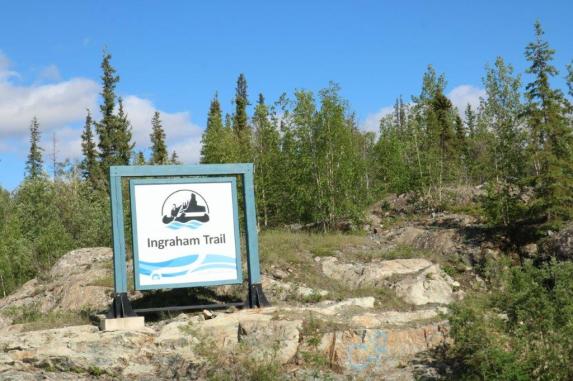 I finally got a photo of a beaver lodge. And this is a patriotic beaver as well, because there is a small Canadian Flag flying on top of his house. 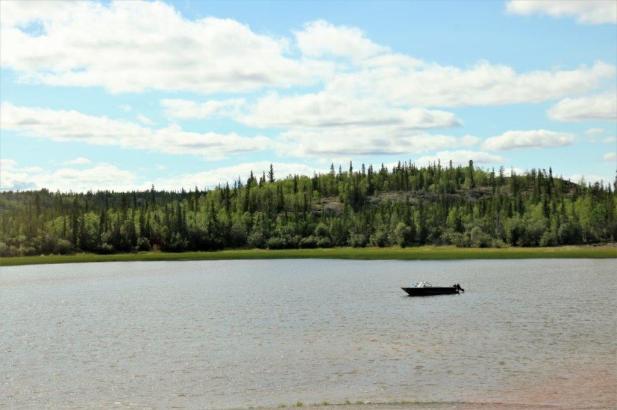 We turned around at Madelyn Lake about 25 km up the Trail and headed back to Yellowknife in time for dinnner.  It was a nice last day here.

Tomorrow we will be up early (well, early for us  – 7 am) and hope to be on the road not long after 8.  We have a 9-10 hour drive, about half of which will be on gravel road, before we reach Fort Simpson where we spend the night.  Fort Simpson is about half way (and the separation point) along the gravel Mackenzie Highway/Liard Trail between Enterprise, NT and Fort Nelson, BC (where John can get a new driver’s license!)