It was another hot humid day with a few stops for geocaches and another museum (a much smaller one though so don’t fret – too much).

Before we left Paris we went to see the Culbertson Fountain in the center of town.  There were two geocaches hidden here but we couldn’t find either of them.  The fountain was being repaired and there were two workmen who were quite curious about what we were doing.

I I asked the men working on the fountain if they knew what was the name of the pretty pink or white flowers we have been seeing all over.  It is Crepe Myrtle – hard to get rid of if you don’t want it and it is necessary to keep it trimmed or it will become very unruly.

On display in a vacant store window were some posters about the 1916 fire that destroyed most of the business district (about half the city).

We also wanted to see the historic Union Station and Museum but the museum was only open on weekends.

We pulled into an historic marker along the highway and found a parcel of pure prairie grass and an interesting story.

Here is another place with a nice name.

Not too far out of Paris there was a geocache hidden – you guessed it – in a cemetery.  But this was another one of those cemeteries off by itself on a country road.  When we arrived there was a man using a weedwhacker to trim the grass around the headstones.  His ride-on mower was on the back of his truck and he had just finished moving the entire cemetery.  I asked him if this was something he did as a volunteer or was he hired by the city or someone?  He said the man that owned the land pays him but he only charges enough to cover costs.  He had ‘inherited’ the job from his father who did if for many years and who even used to trim all the trees outside the fence.

Nice countryside beside the cemetery grounds. 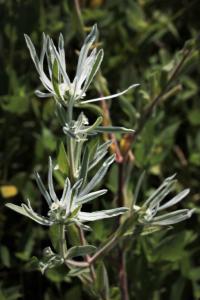 Another plant I need to find the name off.

I remarked about how nice it was that all the cemeteries we have seen are well maintained and many of them have beautiful flower arrangements on the markers.  He told us that family members will get them and bring them, often of Veteran’s Day when it is a common thing for people to bring flags and flowers and place them on any veterans’ graves.

There were some old graves in the cemetery.

This fellow fought in the Spanish American War in 1898. 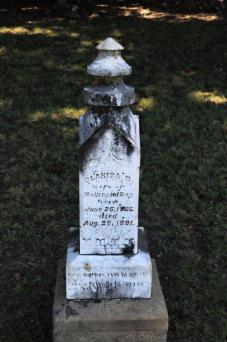 And there were three that looked like large tree stumps that had a crest that said Woodmen of the World.  I looked it up and the organization is a not-for-profit fraternal benefit society founded in 1890 in Omaha, Nebraska.  It operates a large privately held insurance company (now called Woodmen Life) and before 1930 they provided the distinctive tombstones.  The group also had many philanthropic and community outreach projects and had a program that donated US flags.

That is another thing I have noticed different between the Canadian cemeteries I have seen and the American ones.  In Canada cemeteries will have a military section for veterans, or if the person was in the service but died years later there is no mention on the headstone that they were a veteran.  Here in the US every person that served in any branch of the military has the information on their stone.  Different customs, different countries.

We pulled into a roadside rest stop for our pb&j lunch.  Trust Texas to have distictive picnic table covers….

We did a quick drive around the lovely large square at St. Jo. 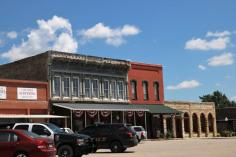 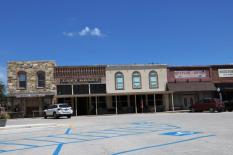 In the little town of Nocona, Texas we stopped at the former Nocona Boot (Cowboy boots) factory to find a geocache.  They still sell Nocona boots but they are no longer made here.  There was a lot of renovation work going on.  A young couple has bought the business and is opening a beer brewery and a retail store as well as the Nocona Boot outlet.

There was a museum in Nocona called Tales and Trails so we went to see what it was all about.  It is a relatively new museum and not all of the displays and rooms are completed. They will focus on the five areas/periods of Texas history: Indians, settlers, ranchers, agriculture, and the oil boom,  It did not take us too long to go through the three rooms they have completed.

I am constantly amazed at how many arrowheads the museums have in their collections.  At Tales and Trails they even had them sorted by historical eras. 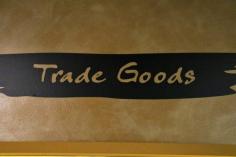 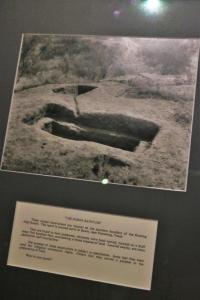 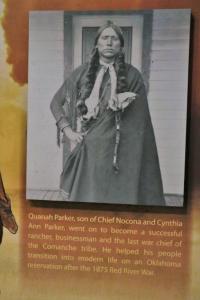 The story of the Nocona Boots.

In the town there was a woman who made gorgeous, large, tooled leather works.  Two of them were on display. It was hard to get good photos due to the reflection of the ceiling lights on the glass. 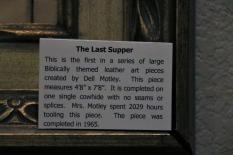 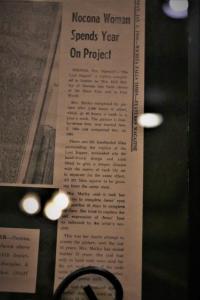 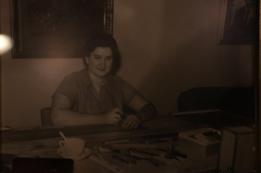 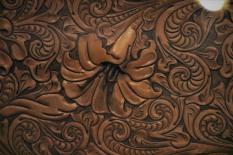 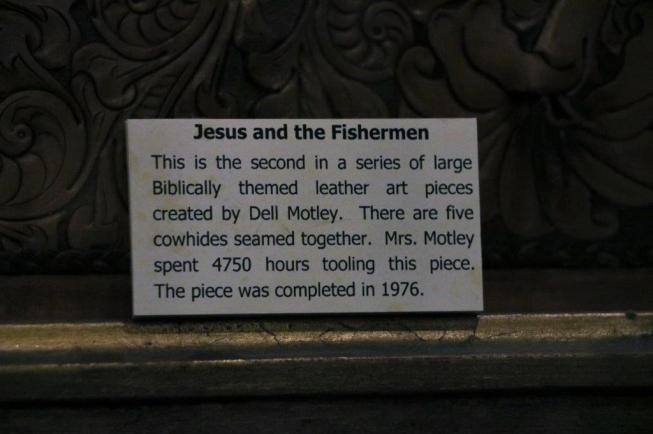 Also in Nocona is a place where they make baseball gloves and other leather sports equipment.  We were hoping to be able to tour the place but they only do a morning and an afternoon tour on Mondays and Fridays.  We were there at the wrong time and on the wrong day. 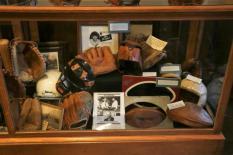 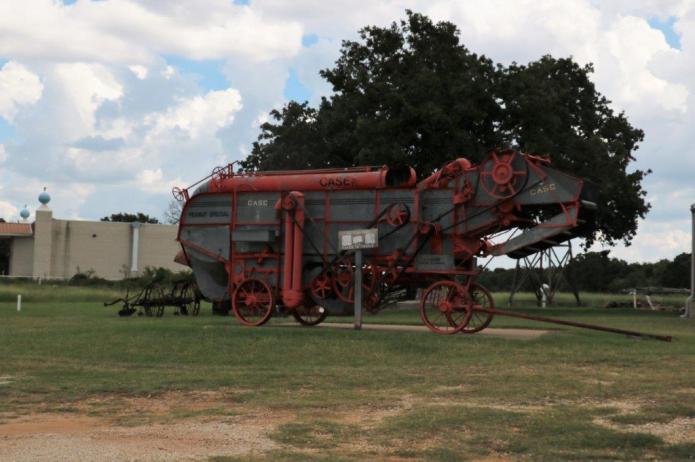 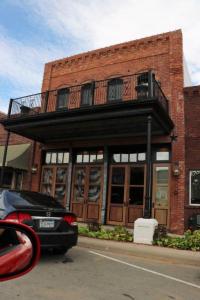 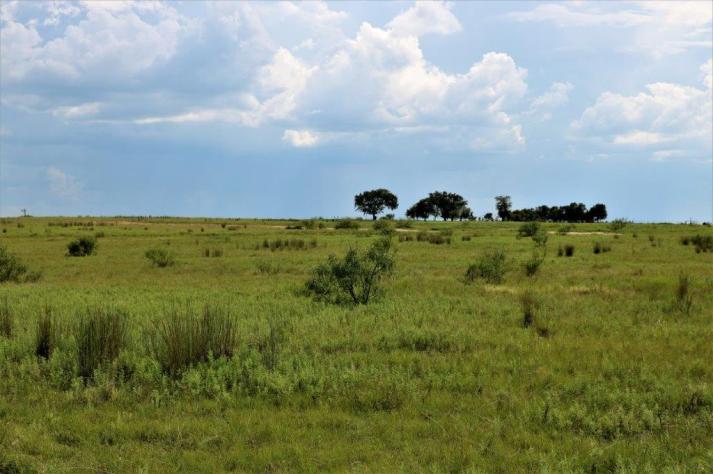 We are back in the flat prairie grasslands.

The Red River is the border between Texas and Oklahoma.  While John climbed the bank behind the state sign I walked back to the bridge to get some photos.  Red River is right.  All the dirt around this area is very red.

We arrived in Lawton about 5:30, found somewhere to eat and then fought for ages trying to get the wi-fi in our hotel to work.  We never succeeded so none of our usual evening work got done. We had a long driving day ahead so it was early to bed for us.