Unfortunately when we got out to the place it was closed for the day.  We learned later that it was a scheduled closure as the season winds down plus they are getting ready for a huge Gospel Jamboree next week.

Since we couldn’t go to Silver Dollar City we decided to continue down the road to Indian Point; one of Table Rock Lake’s many peninsulas and spits. Indian Point is a favourite boat launching area and there were lots of campgrounds and RV parks and a huge parking lot for boats and trailers, as well as many mooring spots along the piers. The Floating Cafe was a good place to have some lunch. 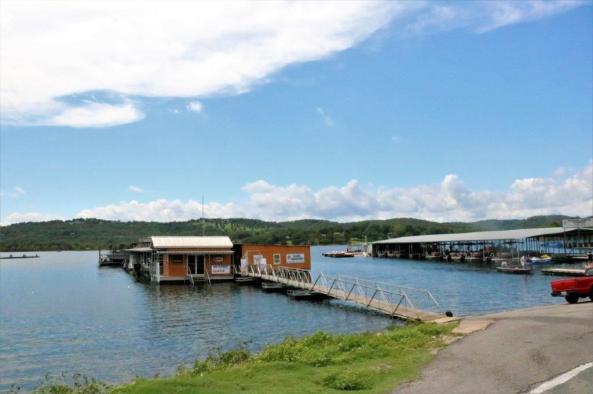 We drove back up to the highway and went further west in search of a few geocaches.  There were three hidden on the grounds of Talking Rocks Cavern so we decided to tour Talking Rocks since we could not go to Marvel.  I love caves.  I find all of the shapes and colours fascinating.  Talking Rocks is not a really large cave.  We descended about 130 concrete steps, make loop around the bottom, and climb all the steps again to get back up to the bottom.  The cavern is 100′ deep.  Since Talking Rocks is located on a hilltop there was 55′ of earth above the cave and at the bottom of the cave we would still be 100′ above Table Rock Lake.

I took quite a few photos, but since Talking Rocks is a living cave, (meaning it’s formations are still growing) no flash photos were allowed and I had to set my camera to a very high ISO.  Even so the photos were quite dark and I had to lighten them with the photo editor, which then shows the graininess of the high ISO.  The colour isn’t very true either. Still they give an idea of what we saw. 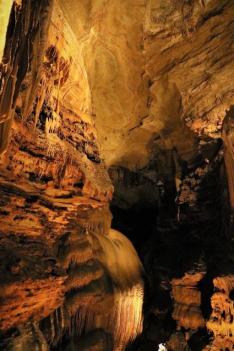 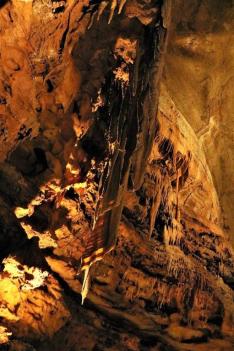 This is called Bacon for obvious reasons. 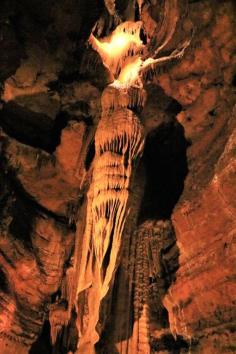 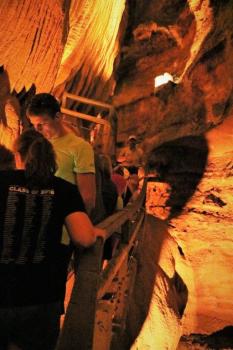 We descended concrete steps and walked across concrete ramps that were built in 1928, making them 89 years old.  Chuck, our guide said we were not to worry.  The original access to the cave was via 7 wooden ladders and ramps.  However with the constant moisture and high humidiy the wood rotted quickly and the cement ones were made.  The environmental conditions that destroy wood are beneficial to concrete making it four times harder than it would be on the surface. 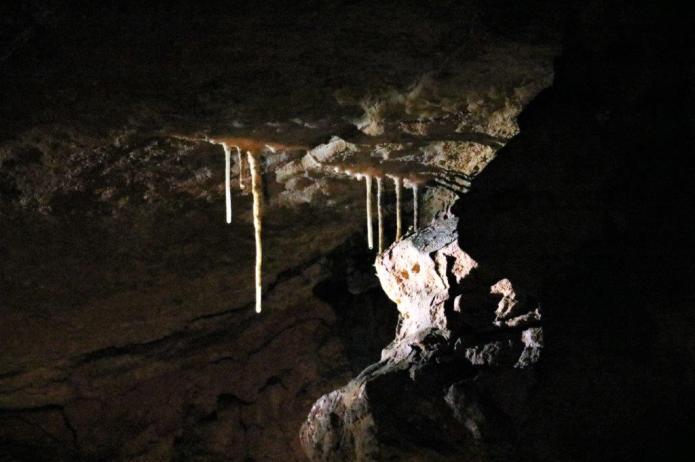 These are called Soda Straws.  They are hollow and are the very beginning of Stalagtites.  As the forms grow they will become solid. 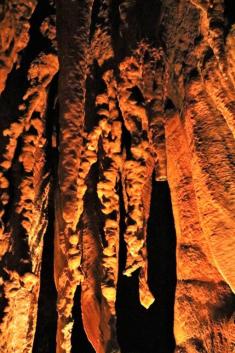 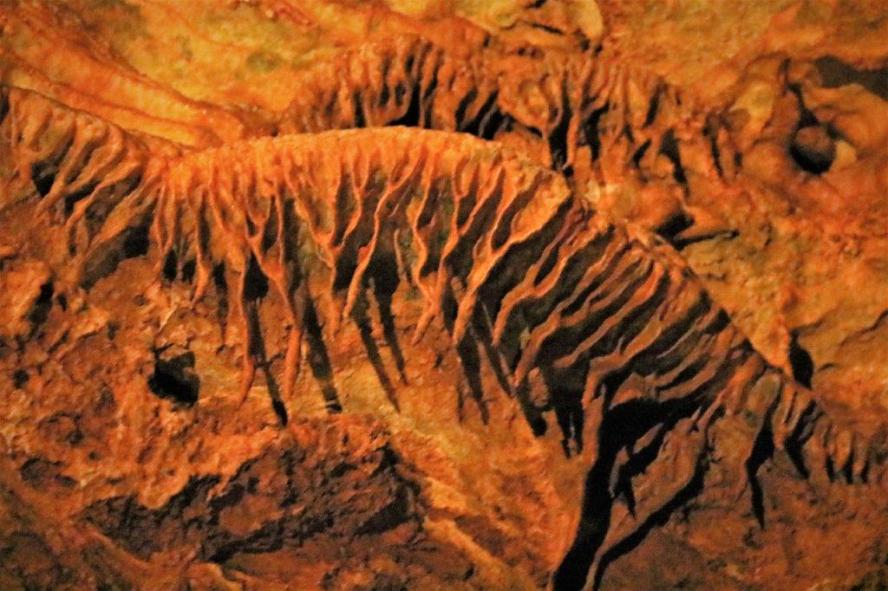 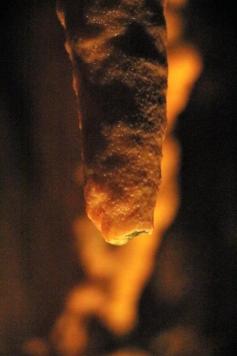 As we turned the bend on one of the staircases I spotted some young stalagtites in the process of growing. When the water drop falls off it will leave behind a small amount of calcite that was picked up by the water as it went through the rocks. This calcite is the mineral that makes the formations in caves – very, very slowly. 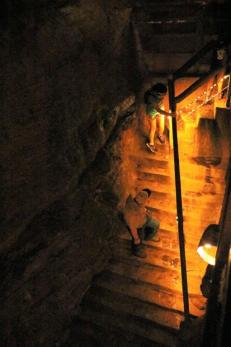 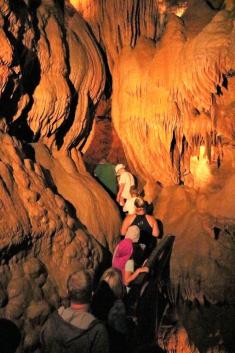 We went down some steep, wet, narrow stairs and wove through some pretty small spaces. Watch your head.

This formation is called a Canopy and this is a small one.  The first photo at the top shows a much larger one.  That canopy is about 50′ thick and very wide.

They call these two formations growing in the hollow Bee Hives. 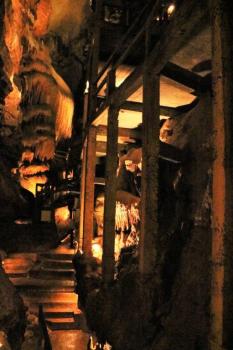 Before we toured the cave we had been unable to find the geocache that was hidden near the building due to a group of muggles (non-geocaching folks) that were sitting at the picnic tables right at Ground Zero.  When we finished touring the cave we decided to go on the Nature Trail to find the other two caches hidden on the property and hope we could pick up the one at the entrance as we were leaving. 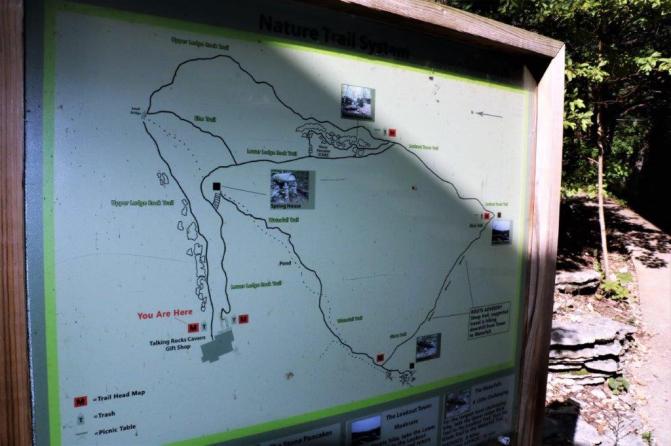 The Nature Trail climbed through the forest up to the top of the hill.  We passed many of these stacked rock ledges that are all over the place. The locals call them Pancake Stones. 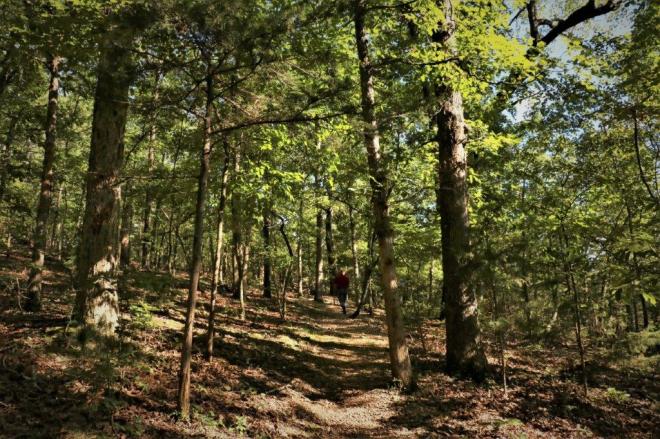 John is just coming down from the top of this batch of Pancake Stones after signing the log in a geocache.

At the top of the trail there is an Observation Tower (67 steps).  We were cetain all we would see from the top would be forest but…if there is something to climb up, one must climb up.  Which is why I know how many steps there are.  I always count the steps. John knows this and as we approached the bottom he says, “How many?”  No explanation about how many what was necessary because he knew I would have counted the steps. 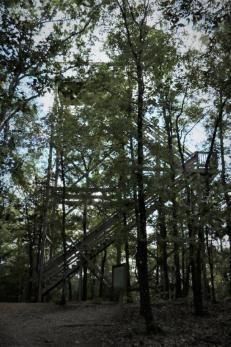 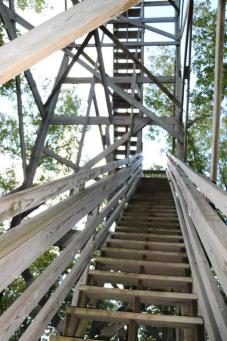 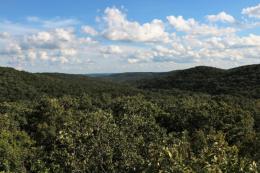 We had been correct and all you could see in all directions was forest.  But today was a much clearer, prettier day than the other day when we went up Inspiriation Tower at Shepherd of the Hills.

Once we came down from the tower we followed the trail past the old Spring House and back to the visitor’s center at the cave entrance.  We found the geocache we couldn’t get to on the way in, plus a few more further up the road (including #1 and #3 of the Bonnie and Clyde hides that we had found #2 of when we drove into Branson) and then headed back to our condo for the night. 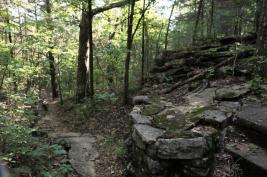