We left Elizabeth and Peter’s place in Maryville at 10 am.  If you drive the freeway south through Springfield you can get to Branson in about 4 and 1/2 hours.  We, as usual, did not do that.  We went south from Maryville to St. Joseph, then turned west and crossed the Missouri River into Kansas.  After a few miles we turned south and pretty much paralleled the Missouri border almost to the Kansas/Oklahoma border and and then crossed the Missouri River once again back into Missouri and drove SE to Branson. 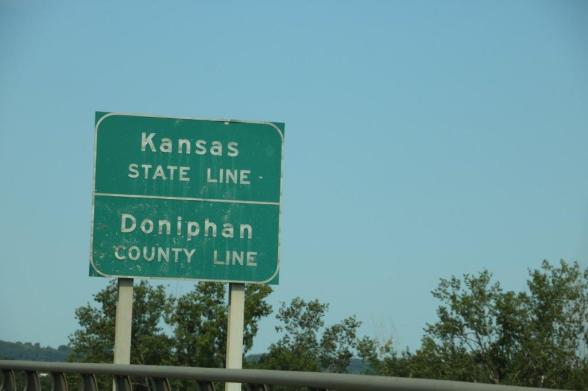 There are a lot of interesting historical places in Kansas; well, really, all over around these states, so I had to just not look and let John drive.  Most of the way was divided highway so we were not even able to stop easily for a geocache.  All of them were located on side roads.  We did manage to get one regular cache and one virtual cache in Kansas.

The regular cache was hanging on the fence at the base of this metal Pony Express rider.  The road we were driving was the Pony Express route and one of the relay stations was located in the nearby town of Troy, KS.  It has always amazed me that the Pony Express mail service only existed for about 19 months.  The adventures from stories, televison, and  films have made the Pony Express a thing of legend.

A brief bit of informations about the Pony Express:  It ran from April 1860 to October 1861.  The advertisement for riders did not gloss over the risks of the job:

The men could not weigh more than 125 lbs in order to utilize as much of the weight the horse could carry for the mail.  They were esentially told, “We can lose you, we can lose the horse, but DO NOT lose the mail pouch.”

The route began in St Joseph, Missouri and ended in Sacramento, California.  There were 157 relay stations located 10 miles apart, where horses were exchanged, 80 riders and 400-500 horses available along the route.  Riders averaged 75-100 miles per shift (sometimes doing two routes back to back), riding night and day in all weather with no gear – just them, the horse and tack, and the mail pouch which was flung over the saddle and they sat on it.  They crossed 8 states and 1900 miles (3100 km) in 10 days.  Sadly the completion of the overland telegraph line made the Pony Express, which was the fastest mail carrier service from the east to the west, instantly redundant.  However the legend lives on.

Our drive south through Kansas took us to Atchison.  I was looking at the map on my phone to see if there was a geocache we could get since it was about time to have a stretch.  I saw the dot for an Earthcache and clicked on it to see what it was about. (Earthcaches do not have a container with a log paper to sign.  They are set up at historical or geologicaclly significant places, and have lots of information attached.  You must send the cache owner the answers to a series of questions before you are allowed to log the cache as a find).  This Earthcache  was located at the birthplace of the famous female aviator, Amelia Earhart.  It was an easy one too, as there were no questions to answer, you just had to send the cache owner a photo of yourself in front of the house.  Easy, peasie.  And we got to have a nice tour of a beautiful house.

The house was owned by her maternal grandparents Alfred and Amelia Otis.  Grandpa Otis was a judge in Atchison County.  Amelia’s father was a lawyer for the railroad and away for long periods of time so her mother went back to her parent’s house to have her child.  The staff at the house were very friendly and informative and the rooms were full of articles, memorabila, paintings, photographs and history about Amelia.  It was great. 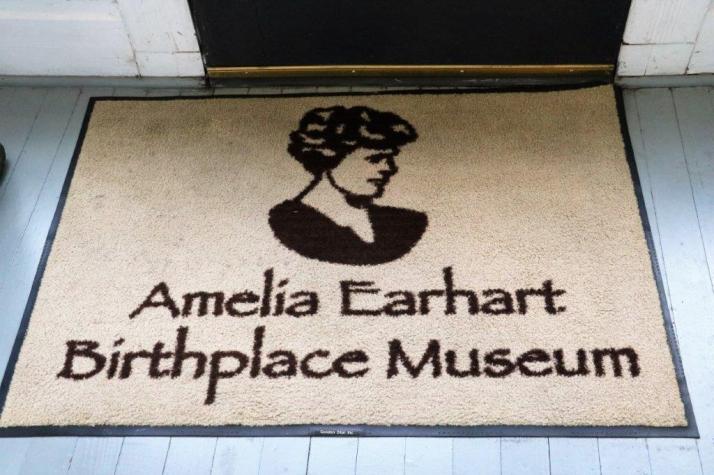 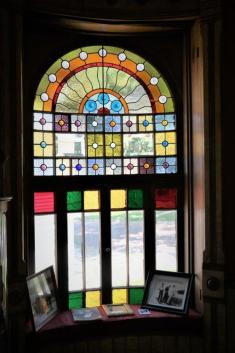 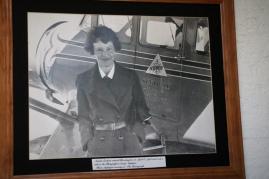 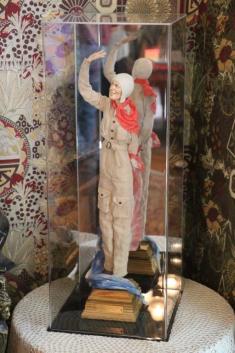 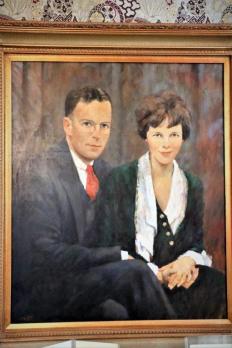 Amelia and her husband  George Putnam.

A month or so ago The History Channel aired a documentary with compelling arguments and information about what happened to Amelia and her navigator when they disappeared over the Pacific Ocean.  The producer kindly provided the museum with a copy of the photograph that was part of their theory. 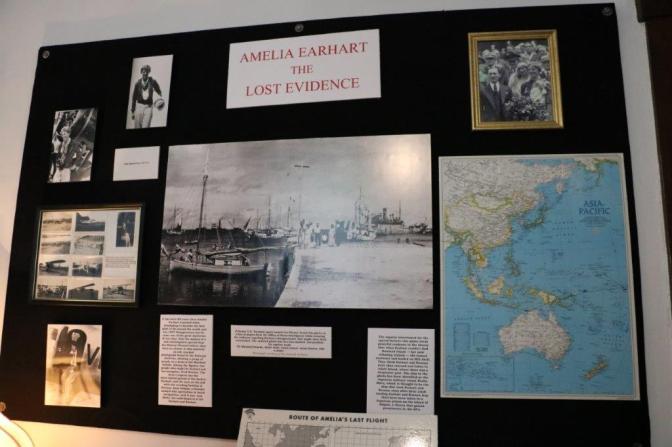 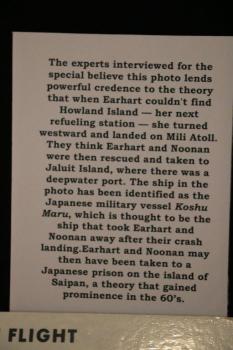 I did not know this, but Amelia Earhart was a fashion designer and had her own label.  She partially funded her flights with promotions, lecture tours, and advertisement endorsments (set up by her husband George) and partly through the sale of her fashions. 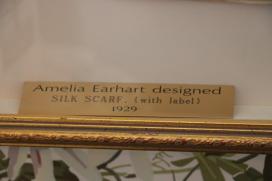 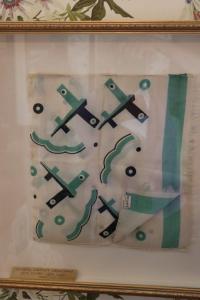 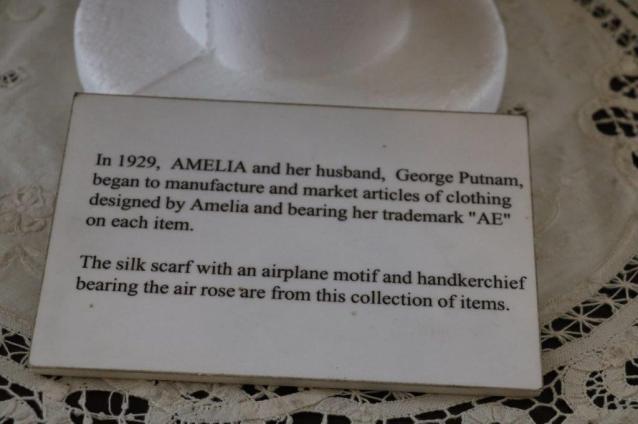 Upstairs was the room she was born in (it is one big room now but was two rooms at the time of Amelia’s birth), and across the hall was the room she had as a girl – she lived in her grandparents house until she was nine. 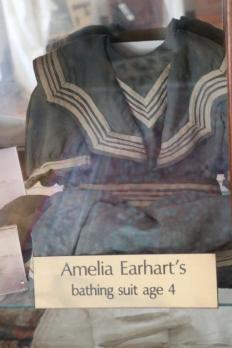 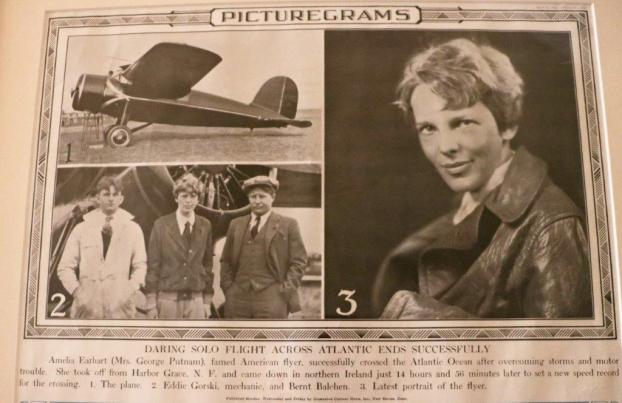 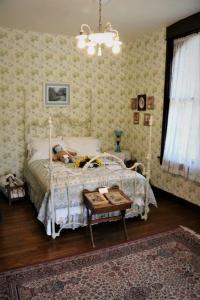 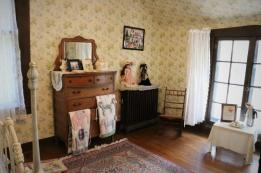 I love her little tea set.

After we left the museum we found a shady spot beside the Missouri River and had our sandwiches before heading southward again.

The only nice, easy, direct route to Branson is the freeway route through Springfield.  To get there from the west via Kansas required a lot of turns on many small roads, which, of course, takes a lot longer but are much more scenic and interesting in our opinion.  After we crossed the river again and entered Missouri we put our resort address into our GPS Stella, but she was constantly trying to take us up some Farm Road about 60 miles from Branson.  I was getting so frustrated I put Stella away and directed John on the routes with the geocache map on my phone.

Not too far from Branson we found our third geocache of the day. The cache was called Bonnie and Clyde #2 – #1 was up a different road not too far away.  We will get it later – and we found out we were driving on a road that they used to evade police after a bank robbery.  Never thought I would get to any place connected with Bonnie and Clyde.  Travel is fun, isn’t it? The Pony Express, Amelia Earhart and Bonnie and Clyde all in one day.

We arrived in Branson late, almost 8:30 pm.  We had been smart enough to stop at a grocery store at a town along the way which turned out to be a very good move because the traffic coming into the city was nuts.  It took us almost 45 minutes to travel the last 5 miles to the turnoff to our resort.  No way would we have wanted to wade back into that mess to find a restaurant or a grocery store. We were able to make a quick dinner and relax a bit after a long driving day.

We left home the morning of Aug 2 and arrived in Branson the evening of Aug 12.  In between we drove in three Canadian provinces and 7 different American States for a total distance of 4,554 km (2,830 miles).  The weather is supposed to be raining and/or thunderstorms for the entire week we are here so we will see how much we go out and about.