As per the new schedule arranged before we went to the Seychelle Islands, we were three days at sea before reaching Mombasa, Kenya.  The Captain sailed quite far south and then came north along the coast of Tanzania to avoid pirate activity.  The day before we docked in Mombasa we heard that pirates had commandeered five ships in the previous 48 hours, one of which had re-taken the vessel; one pirate was in custody and three others had fled in their boat.  They were getting braver and going after ships much further offshore than had been the case for quite a long time.  I am sure our Captain and crew were very happy to be safely out of those waters.

There was an overland excursion offered when we arrived in Kenya; a three-day trip to Maaisa Mara National Reserve.  I seriously considered booking it but decided not to since we had taken two expensive tours (overland in China and the flight to the Taj Mahal) already.  My rationalization was that if I booked a safari tour at every one of our African ports of call the chances were very good that we would see all of the Big Five (lion, cheetah, elephant, rhinocerous, and water buffalo), plus many other of the continent’s animals for less cost than the overland.  I worried that this might not be the best decision but as I say, “You can only do the best you can do with what you know at the time.”  That’s my story and I’ll stick too it (for now).

From the port we had to take a very short ride on the Likoni Ferry to the mainland; a couple of hundred meters, but it was packed with people and vehicles. There were as many waiting on the other side to board for the return trip.  The vehicles drive on first and there is literally a ‘holding yard’ – covered enclosure – where the pedestrians wait until the cars and buses are on board, then as many people as fit in the space are allowed on.  Rush hour every ten minutes!

The nine-hour tour to Mwaluganje Elephant Sanctuary included almost 5 hours of driving on bumpy, dusty roads to get there and back.  As I have said before, the long drives to go inland on some of these excursions don’t bother us because we get to see so much of the countryside, local people and communities. During the drive John was transported back to 2008 when he and our daughter went on a mission trip to build a medical clinic at an HIV/AIDs orphanage in Zambia.  So much of the landscape, buildings and the activities of the people were the same. 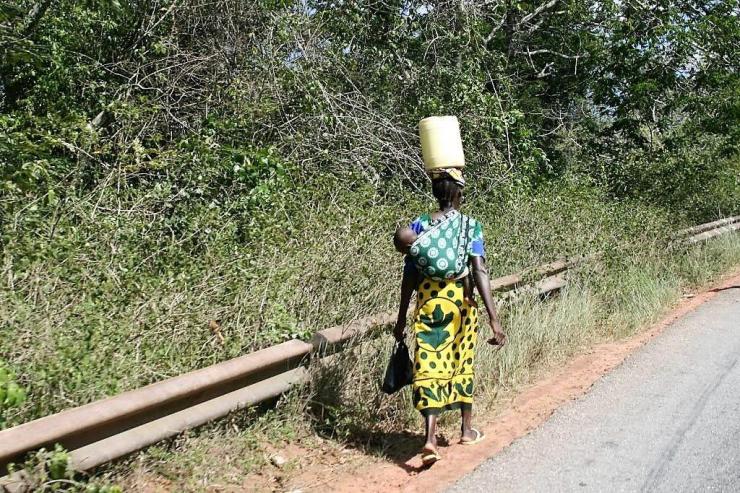 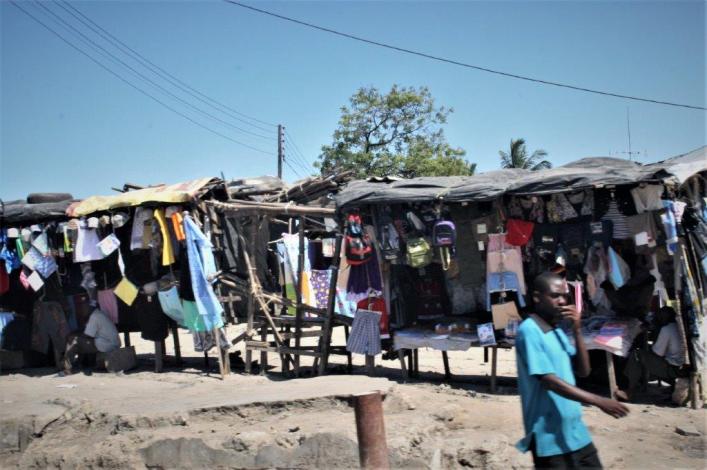 Within the sanctuary we only saw elephants from a distance half-hidden by brush. 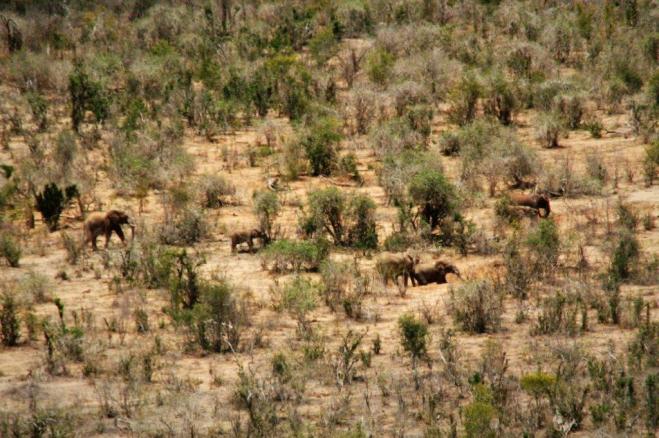 The Mwaluganje Elephant Sanctuary was created to provide a safe corridor from Shimba Hills Reserve (where we were going the next day) to the forest.  It is ‘historically’ a bull’s area although you can see the occasional female and her calf.  The sanctuary is a community-based project that supports 200 families who voluntarily contributed the communal land for the preserve; agreeing not to farm this important elephant habitat.  The people live nearby and manage the sanctuary, earning more from tourism than from farming.  It has enabled them to build school classrooms and enjoy a steady water supply. 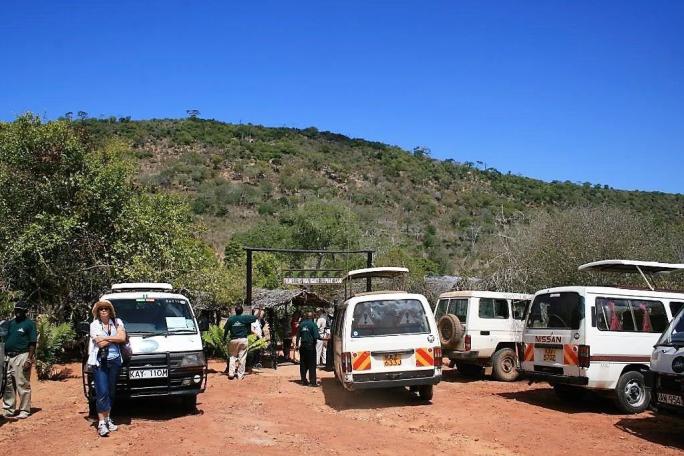 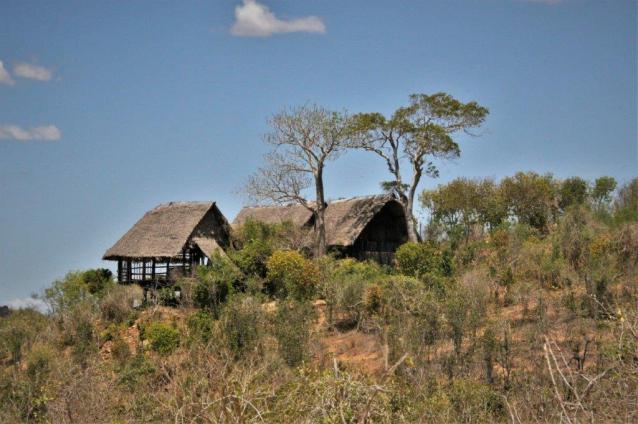 This is a very large millipede that you do not want to bite you.

At the Hotel/Camp where we had lunch we had a great view of a watering hole where a small herd of elephants congregate. 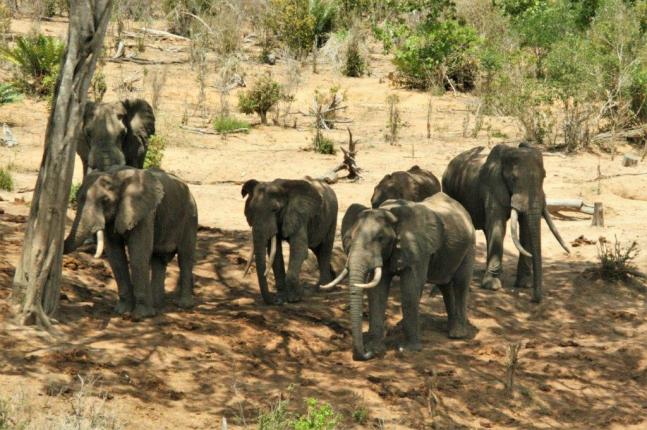 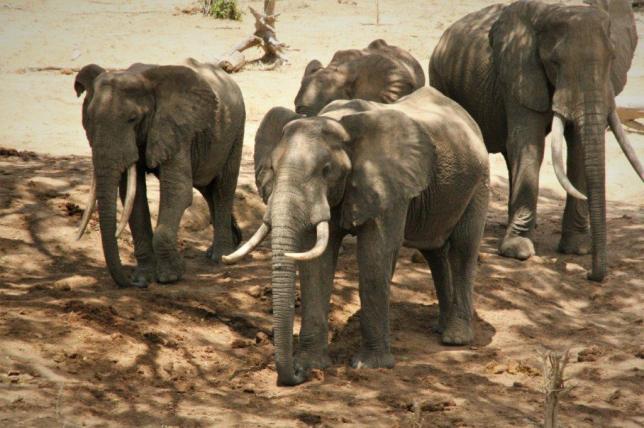 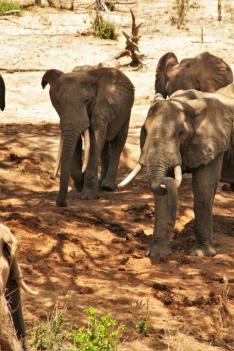 Elephant trunks apparently are heavy and a tusk is a good place to take the weight off.

There was also a big warthog that like to wallow in the mud at the edge of the waterhole. 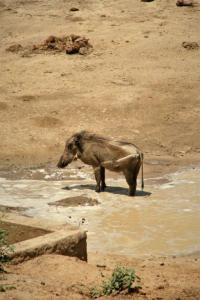 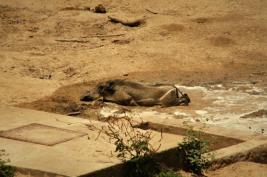 One of the elephants took exception to the presence of a couple of other elephants in the water and would come stalking over to chase them away.

On the drive back to the port we saw all these people with nets standing in the river.  It looked more like they were collecting the weeds or grass than fishing. 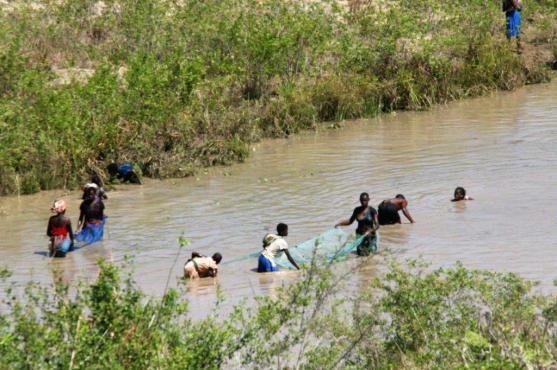 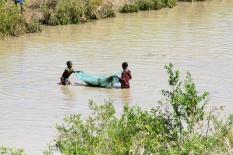 We had a short game drive at the end of the tour and saw this warthog and her three babies scurry into the brush as the vans drove by.

And this colobus monkey was making sure she wasn’t too visible. 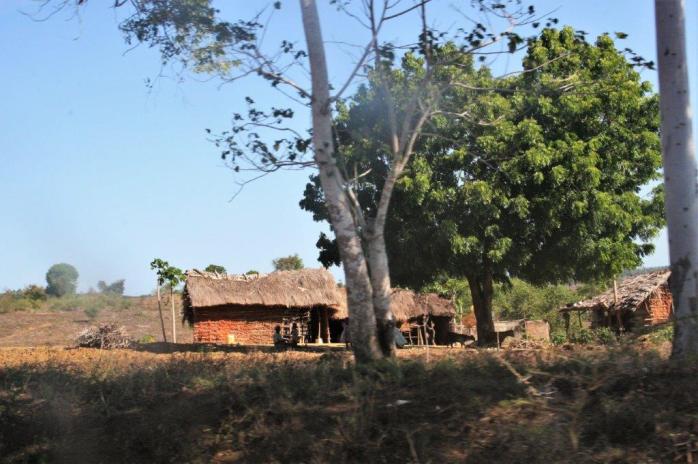 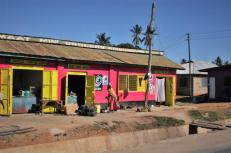 The dry season allows much of a store’s merchandise to be displayed outside.

We returned to the ship in time to clean-up and attend the Maundy Thursday service provided by Pastor Jack.  The next day was Good Friday and we would be off to Shimba Hills for most of the day.  Holland America has a Protestant Pastor, Catholic Priest, and Jewish Rabbi on all of their long Grand Voyages.  They provide worship services for guests and crew, and there are also prayer and instruction times available for the predominantly Muslim Indonesian crew members.

We had an enjoyable first day in Africa.  We had two more days in Mombasa, then a stop in Mozambique, before Richards Bay, Durban and Cape Town, South Africa – animals every day until we reach Namibia on the west coast.