There are two types of travel days: Journey Days and Destination Days.  Journey Days are what we do the most of.  We may have a reservation for a hotel up the road but what we see, where we stop, which roads we take are all in flux.  Destination Days, alternatively, are days you must be somewhere for a specific event, appointment or meeting.  We don’t do a lot of Destination Days since we retired.

However, today was a Destination Day. We weren’t sure exactly which day on this trip would be our Destination Day but before we left home Jan. 3 we had this one planned.

We have been meandering up the California/Oregon coast but today we left Lincoln City at 10 am and followed Hwy 18 East.  We drove through a lot of farm country on narrow, winding country roads.  We passed some huge Christmas Tree or fir nursery lots.  We also passed several very large new plantings of some fruit or nut tree.  We couldn’t determine what it was. We saw some mature trees in an orchard but the leaves were very small and fine-looking; not like anything we have seen before.  But whatever it is growers were going into it in a big way.

Grapes are also grown in northern Oregon and there were several large shrub and tree nurseries.  Lots of agricultural products it seems.

Not far out of  Silverton we saw signs for The Gordon House designed by famous architect Frank Lloyd Wright.  Since we were driving right by we pulled in for a look-see.  We did not tour the house however as it was a one hour tour for $20 per person.  The house isn’t very big – just over 2100 sq. ft. – so we figured most of the tour time would be spent listening to a lecture on the genius of the architect (he actually designed this house when he was 89) and/or the process of moving the house to its present location.  We walked around it and read the signs and went on our way. 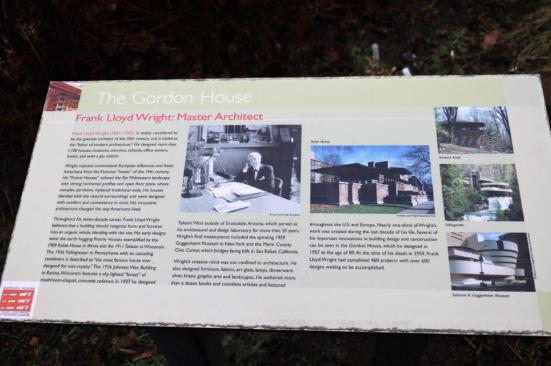 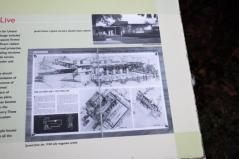 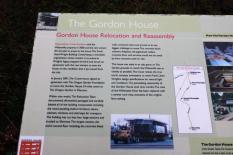 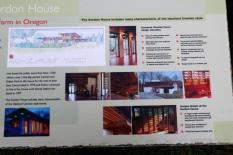 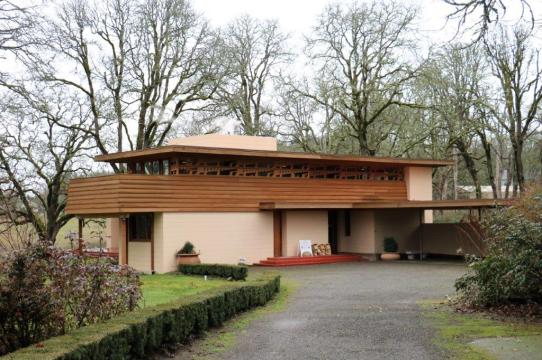 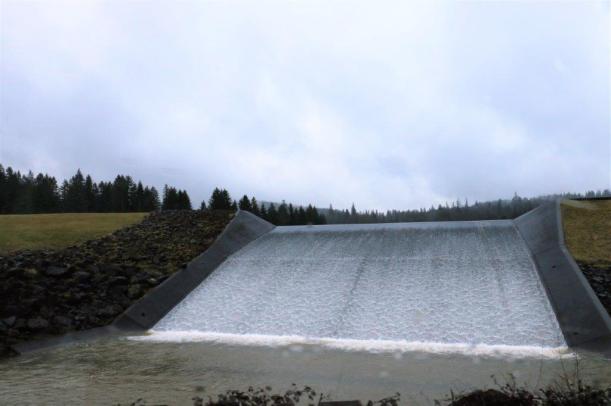 This is a spillway off a reservoir.  Looks pretty doesn’t it?

Finally, about 12:30 this afternoon we reached our destination: The Original Stash Tribute Plaque.  The first geocache was hidden the day after the removal of the Selective Availability for the Global Positioning System.  This allowed small objects to be hidden with pinpoint accurate co-ordinates.  A man from Beavercreek, OR named Dave Ulmer put some trinkets in a 5 gallon black bucket and hid it in the woods on May 3, 2000.  He then posted the co-ordinates on Usenet.newsgroup.  By May 6 it had been found twice.  Dave originally called it the GSP Stashhunt or gpstashing.  However it wasn’t long before people felt that stash could have negative connotations and the term geocache was formed (geo – earth, cache – hidden objects or goods).  There are now over two million of them hidden all around the world.

The original bucket was severely damaged by an Oregon road crew mower and no longer exists.  Concerned geocachers recognized the importance of the spot and created the Original Stash Tribute Plaque, dedicated to geocachers everywhere.

After we found the cache container hidden near the plaque that we had to sign to record our visit, we found a second cache hidden further in the bush very near-by.  When we were looking at the map to find the best roads to take to the plaque we noticed a group of geocaches quite near the original stash location.  We drove up the road about a half mile further and spent three hours walking along trails and past wet ferns, skirting puddles and dodging branches to find all seven caches – in the rain.

Some of the people that hide geocaches are very clever.  This one had the log container inside this tube strapped to the tree.  To get it out you had to remove the caps from the top and bottom and blow hard in the bottom hole so the film canister would pop out the top. 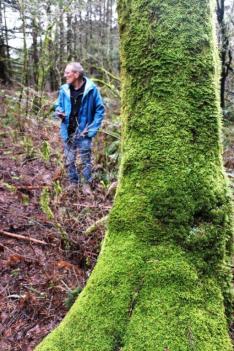 As always I love the moss.

A cache called One in Fifty literally meant that the log paper was inside one of fifty film canisters in this container.  We lucked out and found it after opening our sixth one. 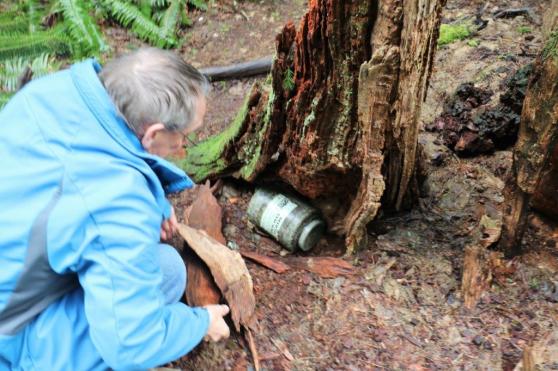 This cache was hidden by a fellow from the Black Forest area of Germany.  He brought the little cuckoo clock that used to hang in his daughter’s bedroom and placed it in a cache in the US.

There were five more caches hidden along side the road that we picked up on our way back down.

The cache was also inside this tube strapped to a tree.  But to get it you had to use the provided magnet to ‘catch’ the cache inside the tube and bring it to the top.

We only had about 23 miles to drive once we got back down the hill and so we arrived at Oregon City at 4:30; which gave us time to dry out and warm up a little before going to the restaurant for dinner.

We were going to go to Olympia, WA and spend the night with John’s second cousin David.  Unfortunately, he and his wife both have bad colds so they don’t need company and I don’t want to catch it.  Instead we have moved up our visit to my cousin Caroline in Auburn by a day – so that is our Destination tomorrow – what we see and which route we take will make it a Journey day anyway.