A somewhat frail elderly lady in the group was late coming down and caused a 15 minute delay in our departure from the hotel to the airport.  Then, when we arrived in Beijing she took a wrong elevator at the departure gate and we all had to wait a half hour in the bus while Lin located her.  These delays all cut our touring time by 45 minutes and it’s not like we can juggle things around to get the time back.  Tours like this have very set times to be at locales and meals and hotels.

There are a couple of relatively frail folks on this tour and all the walking and long days is a bit much for them.  The rating in the brochure tells you it is an active tour with lots of walking but people don’t take notice if it is something they want to do.  Fair enough, I suppose, but it makes it hard for the ship’s excursion staff, the guides, the bus drivers and the rest of the guests if there are people on an excursion who are not really physically fit to participate.  There are always options for less active tours.  But if the ‘active’ tour has the things I would like to do the most, it would be difficult to not sign up and hope for the best.

From the airport we were driven to a restaurant for a Chinese buffet lunch.  We sat at large round tables with a lazy-Susan in the center and the staff would bring a dish of food to each table, then another one, then something else, and then another item.  After awhile the table was crowded with options to eat.  And, the rice always comes last.

After lunch we visited a Cloissené factory where  enamel paint is applied to a copper wire outlined pattern that has been soldered onto hand-hammered copper vases, plates, bowls, etc.  This is then fired in a kiln, another coat of paint is applied; it is fired again.  This process is repeated up to 6-7 times because the enamel paint shrinks minutely when heated and needs to be re-applied so as to fully fill the outline.  When it is satisfactory the item is polished to a smooth sheen. 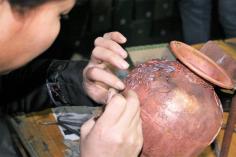 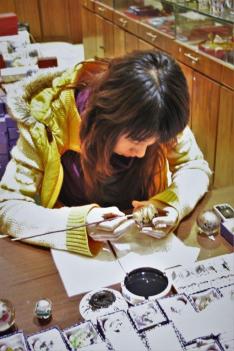 It was beautiful stuff and the shop had other items like embroidery and china, but I could have spent less time than an hour there.

Due to the delays in the morning our time at the Great Wall was cut short by almost an hour so we did not linger long before climbing to the first guardhouse.  We visited the Juyongguan section of the wall which is only about a half hour bus ride from the restaurant.  The close proximity to Beijing makes this section one of the most visited.

The wall is actually a series of fortifications made of stone, brick, wood and other materials.  Over time the fortified sections were joined together creating the Great Wall.  The earliest section, of which very little remains, was built between 220-206 BC.  The majority, however, was constructed during the Ming Dynasty from 1368-1644. 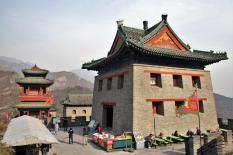 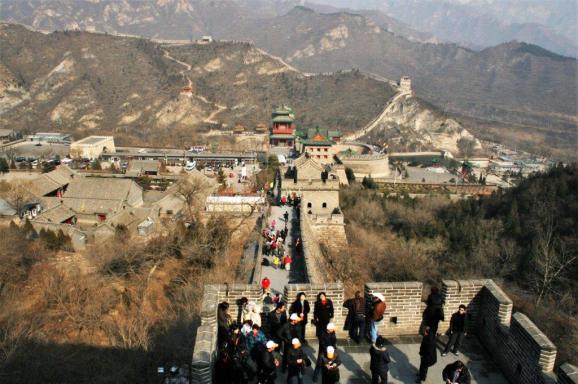 Again, I loved having Jackie’s 500 mm zoom lens but adding it to the three lens in my camera bag increased the weight significantly.  It was very heavy by the time we reached the guard tower.  The lens let me get photos of people climbing another section of the wall across the valley though!

Contrary to popular belief the Great Wall is not visible from outer space.  Some of it can be identified from a low orbit but atmosphere conditions must be exactly right.  Despite that, the wall is incredibly impressive.  It is 8,850 km (5,500 miles) long.  The sections of actual wall make up 6,359 km (3,889 miles) of this distance.  Parts of the ‘wall’ are trenches (359 km or 223 miles) and some of it is comprised of natural defensive barriers like hills or rivers.  It is estimated by archaeologists that the entire wall and all of its branches measure 21,196 km (13,171 miles).  That is over half the distance around the earth at the equator! 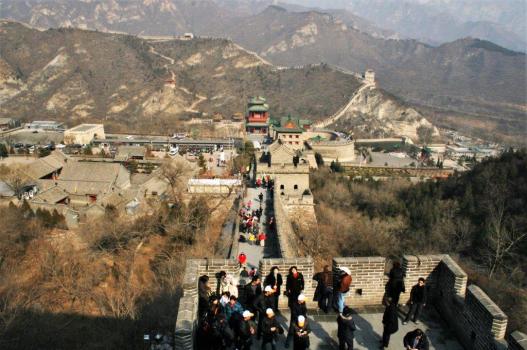 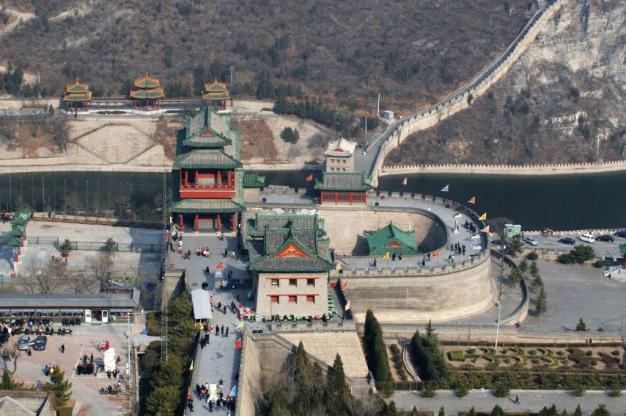 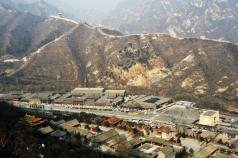 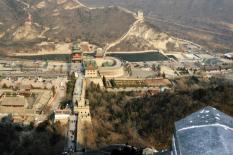 The steps were wide enough to allow a couple of soldiers to travel side by side or pass each other but they were intentionally uneven in rise and depth to make it difficult for raiders to use. 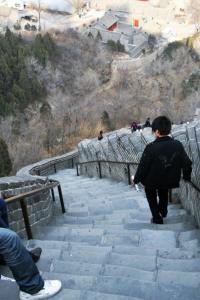 Not only was the wall used as a defensive barrier but it was an effective border control for collecting duties and tariffs on goods traveling along the Silk Road.  And it helped monitor immigration and emigration. 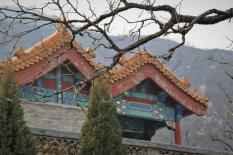 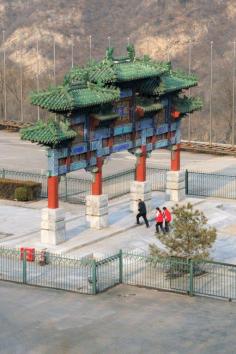 While we were coming down from the guard tower a bullet train went through the other side of the valley. 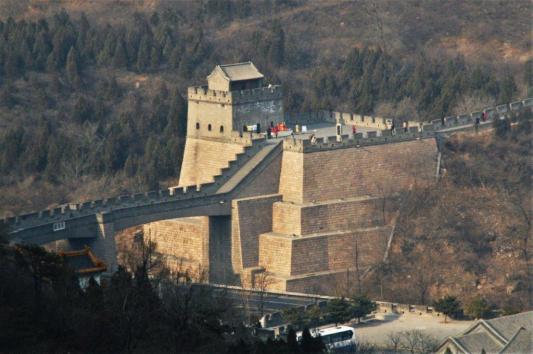 Lin did manage to delay our dinner for a half hour which gave back some of our lost time from this morning and allowed us to stay at the Wall a little longer.

On the drive back to our hotel in Beijing we drove past the Olympic venues – the “Birds Nest” and the “Water Cube.” 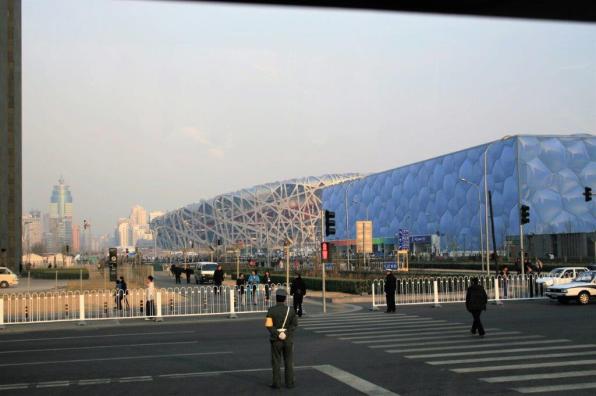 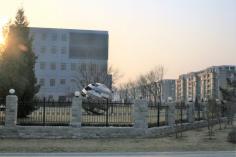 Our hotel was at one end of three inter-connected 5-star hotels.  We stayed at the Beijing Hotel NUO (I have no idea what the letters stand for.  It is a government owned complex so they may be related to that somehow), next was the famous Raffles Hotel and the last one was the Grand Hotel Beijing.  There was some sort of leadership conference going on in the city and many of the dignitaries were staying at our hotel.   This meant we needed to pass through a security check every time we went to our room.  Good thing we were gone all day or that would have become quite annoying.

We got back to the hotel at 6 and our tour included a traditional Peking duck dinner at 7.  We had had enough Chinese food for the time being and neither of us like duck so we opted out and went to the Outback Steakhouse in the hotel.  After dinner we took a walk down a near-by pedestrian shopping plaza (no lack of American-style consumerism) and through the three connecting hotel lobbies before going up to our huge 2-room corner suite for the night. 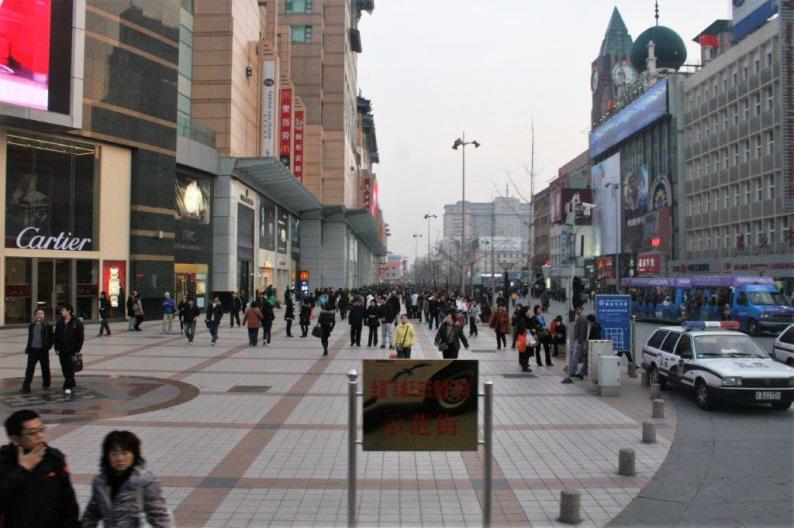 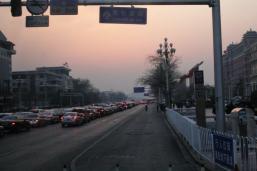 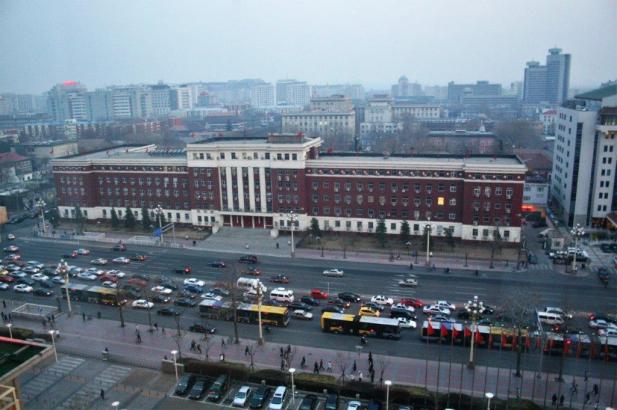 We had a nice view from our room.  The next day was the final one of our excursion – Tian’anmen Square and the Forbidden City.