It was freezing cold, still, when we got up this morning.  The poor staff at the hotel desk had to go buy some space heaters to deal with the cold air that kept coming in when the lobby doors opened.  The amount of snow they have now is quite normal, but the cold snap is not.  And they don’t like it.  I told the greeter at Wal-Mart (John needed some sunglasses and we stock up on our soap when in the US) that it was my fault.  We dragged it with us.  I told her to tell any of the customers that Janet is to blame.  She promised she would place all the blame on the Canadians.  For the first time on our trip all the bottles of water in the back seat of the truck froze solid overnight.  Did I mention it was cold in Winnemucca this morning?

We found our first geo-cache of the day, “Wally Rock,” under a tree (fake rock) at the far end of the Wal-Mart parking lot.   It was so cold none of the pens would write on the log paper so all that shows is some indentations with a few ink marks.

We left Winnemucca about 10:30 and drove SE on Hwy 80 to Battle Mountain.  We followed a long  stretch of straight, flat road then went up through the Golconda Pass, descending into flat valley bottom again.  After that it was straight road all the way south from Battle Mountain to Austin on Hwy 305.  There is nothing out here but sand and scrub so no need to make turns in the roads.

Most of the scenery was the same as yesterday; snow-covered trees, scrub brush, and mountain slopes.  As usual I took lots of photos of all of the above but I have weeded out a lot of them so you won’t get too bored (hopefully). I can’t help myself, it all looks so pretty! 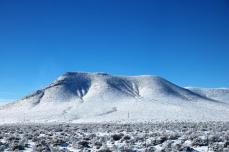 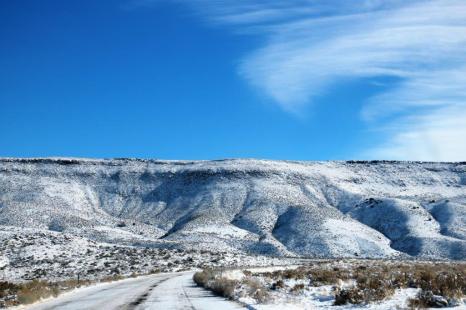 Austin is a typical old cowboy town.  The area is billed as “The Heart of Pony Express Country.”

Looking down on Austin and back along the flat valley we crossed. 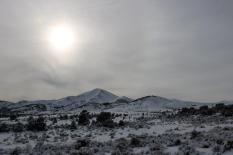 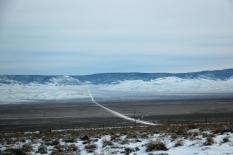 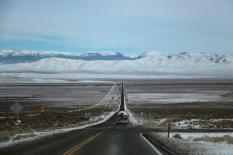 About half-way between the turn-off to Hwy 375 and Tonopah is a small community called Carvers. I turned on the data on my phone to see if there were any geo-caches in the area and spotted two not far ahead.

The first was hidden among a pile of rocks at the Nye County line and the second was at a State Heritage Marker where Tate’s Stage Station was once located. 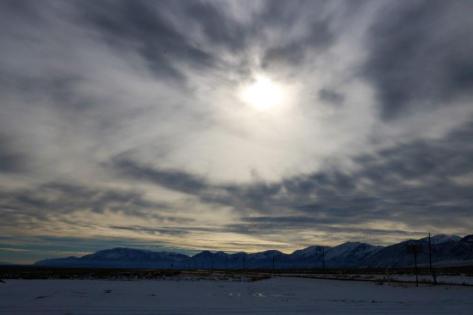 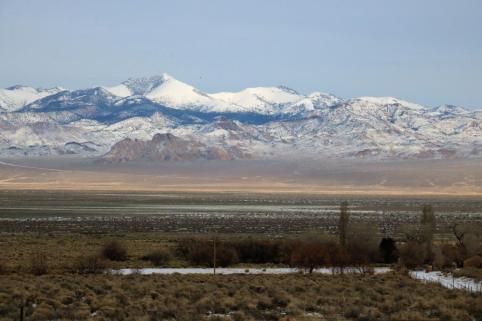 A bit further down the road was a rest stop at another State Heritage Marker about the Big Smokey Valley.  Once again it was so cold the pen wouldn’t write (after this I took a pencil for signing the logs). 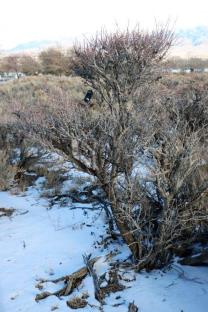 There were tracks from little critters winding all around the bushes. 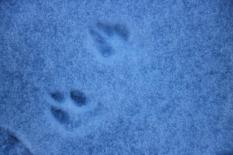 We found another cache at another State Heritage Marker about Manhattan Junction, a former gold mining community. 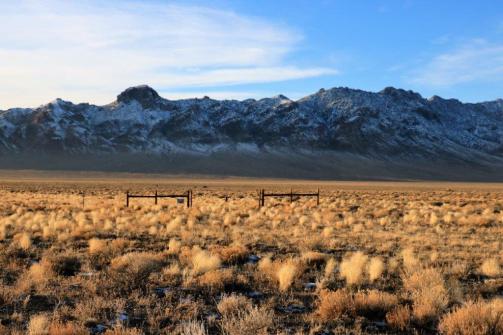 When John was looking at the geo-cache map in the hotel room last night he discovered that the area between Battle Mountain and Tonapah is positively riddled with power trails and mega-power trails. (A power trail is a series of geo-caches hidden close together along roadsides or trails.  We did four power trails containing 525 caches at Anahim Lake in the BC Caribou this summer.)  The power trails here are VERY long.  Several of them contain over 300 caches.  A group of cachers from the east coast came out here in October and found over 500 caches IN ONE DAY!  We, obviously, cannot take on any of these right now but it has been noted for a future spring or fall road trip.

We did however pick up 16 caches from the middle of the BAM series – numbers 285-300.  By then the sun was setting and we still had a 45 minute drive to get into Tonopah.  In total, we found 22 caches today.  Not bad for a traveling day.  (Observe: we left the worst of the cold behind today and you will note from the photos from the latter part of the day that we have almost left the snow behind too.  I knew we would succeed eventually.) 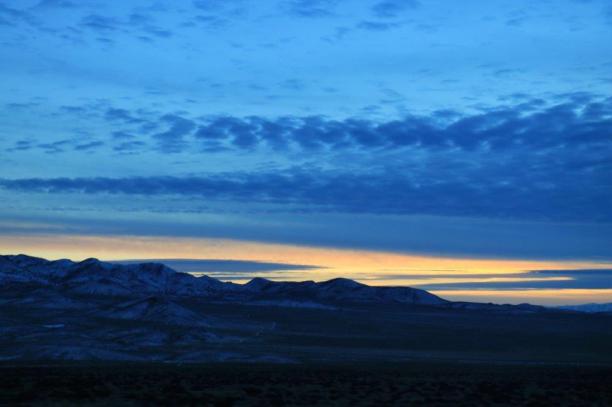