Today is our last day in Bella Coola.  Tomorrow we drive back up  “The Hill,” through Anahim Lake, and on to William’s Lake for the night.  Holiday is almost over.

There are a few caches in the area we haven’t found.  Two of them are missing and soon to be replaced by the owner.  Another one we looked for twice without success.  The owner is going to check on it.  Another is at the end of a strenuous climb to the base of a waterfall.  With my current lack of oxygen issue and coughing all night we decided to give it a pass.  But there is one cache we wanted to find. 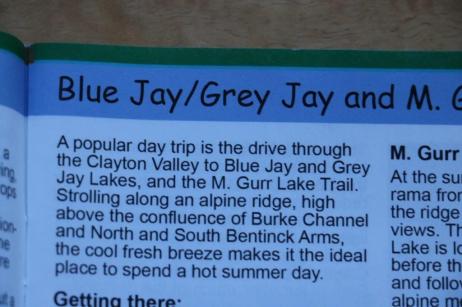 It is located at Blue Jay Lake, a 20 km drive into the mountains south of Bella Coola up the Clayton Forest Service Road that begins at the Clayton Falls we visited our first day.  We asked a fellow working on a grader at the parking lot to Clayton Falls how long it would take to drive to Blue Jay.  “The road is a bit rocky but I would say it would probably take about an hour,” he said.

Good enough.  The scenery is supposed to be gorgeous so we saved it for our last day.  We were on the road at 11:15.  It only takes about 15 minutes to get to the base of Clayton Falls Forest Service Road which begins with a steep grade and is a pothole riddled narrow gravel road through thick forest. 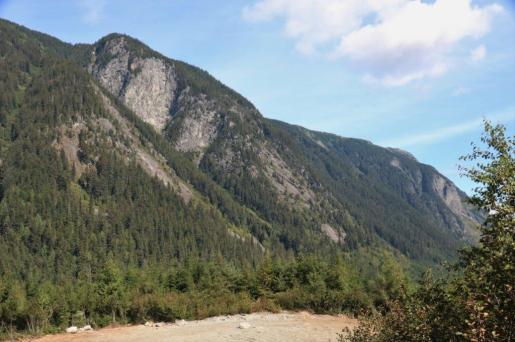 Eventually we rose high enough to see the mountains and they were glorious!  The road however, deteriorated rapidly and repeatedly.  It reminded us very much of the 8 km stretch we drove in Newfoundland that was nothing but rocks.  To be fair there was some dirt amid the rocks on this road but there was also water channels, ditches, washout areas, and craters. 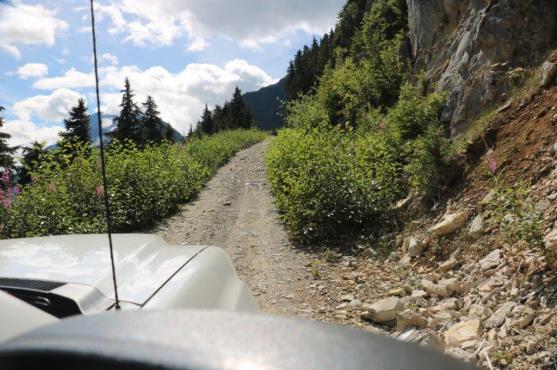 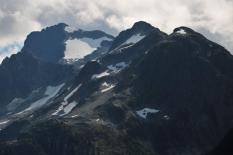 The ‘pleasant summer day drive’ took over two hours; most of it in Four-Wheel Low.  We finally reached the summit and the trailhead to M Gurr Lake, about a 1.5km walk.  There were two lovely little lakes here which we admired before getting back in the truck for the ‘short drive’ to Blue Jay Lake. 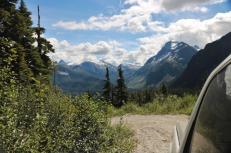 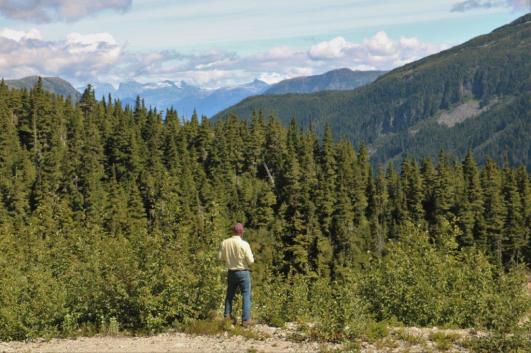 Not.  We were at the summit.  Blue Jay Lake is on the other side of the mountain about 4 km down.  Well, nothing for it but to keep going.  As we descended we could see a  couple of large bodies of water through the trees far off into the distance and were thinking if they were Blue Jay and Grey Jay Lakes they were a lot further down the mountain than four so km.  We finally figured out they were the North and South Bentinck Arms; the main inlets leading to  Bella Coola. 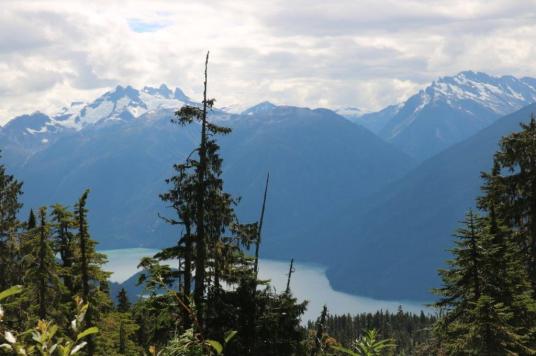 We finally reached Blue Jay Lake and the location of the cache.  The last logged find was in July 2015 and the person had written that the cache was easy to find so they hid it a bit better.  Well, they hid is so well we could not find it.  We combed through all the brush and all the rocks along the entire roadway to the boat launch area where the cache was supposed to be with nary a sign of the Tupperware container that held the log book.  So very disappointing!  After an hour we finally gave up, but it was very hard to do.

The drive back down the mountain did take about the hour we were told the trip was.  Funny how going back always seems, and often is, faster than going up.   The mountains were equally impressive from the opposite direction. 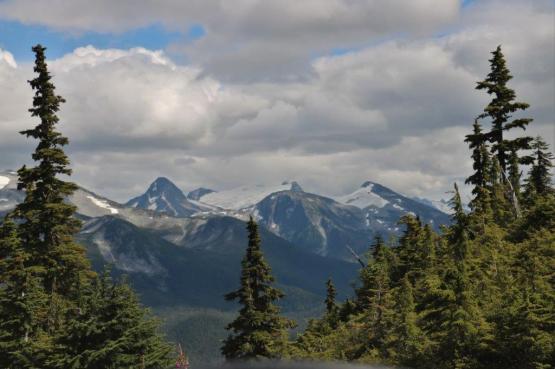 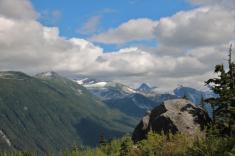 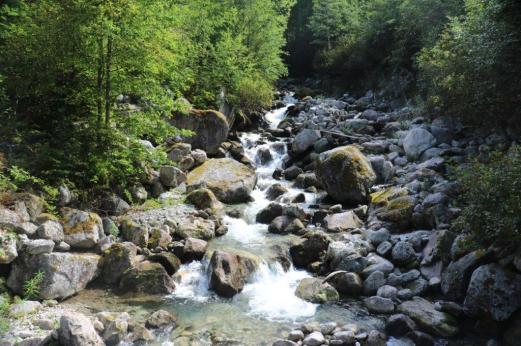 We traversed a couple of really bad patches on the road but I didn’t try get pics of them.  This hazard, though, was noteworthy enough to stop and record.  The hole is just off the middle of the road! 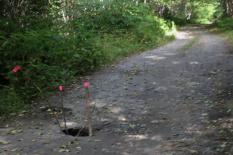 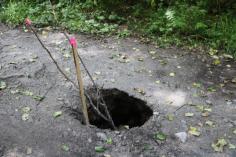 When we got back down we found three more caches and checked back on one we couldn’t find yesterday that the cache owner was going to confirm was there on his lunch hour today.  Still no luck.  We did complete a two-stage multi-cache that we’d had trouble the other day inputting the second stage co-ordinates.  It was nice to get that Smiley after the disappointment of Blue Jay Lake.

We located a total of 25 caches in and around Bella Coola and we traveled many of the back country roads.  Caching brought us here and caching took us to many parts of the area we would not normally have gone to see.  We had wonderful weather, saw spectacular scenery and enjoyed ourselves immensely.  We will have to come back some day. 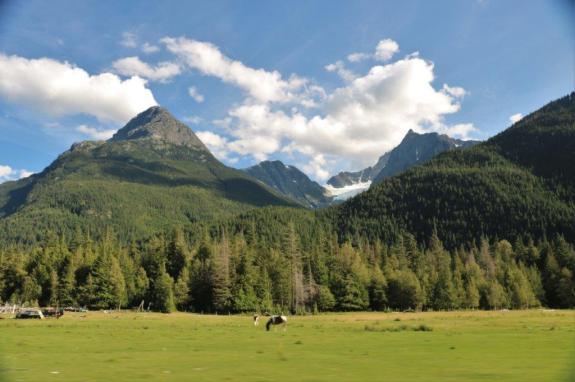