Our last stop in Iceland was at Isafjordur (Eesa-fjord-er) which means Ice Fjord. Isafjordur is considered the capital of the rugged Westfjord region.  The fishing industry is still second to none but tourism is a growing trend.  We were docked near the fish factories at the pier and just had a short walk to the next dock to get on our boat.

Our lovely sunshine disappeared behind thick clouds, light rain and a cold wind.  Thankfully the boat we took for our tour to Vigur Island (also popularly known as Paradise Island) had indoor seating.  The people who sat outside on the chairs at the back got very wet and very cold.  Several of them came inside before the end of the 35 minute ride to the island but a couple of hardy folks stayed out the whole time. 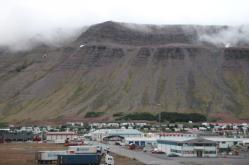 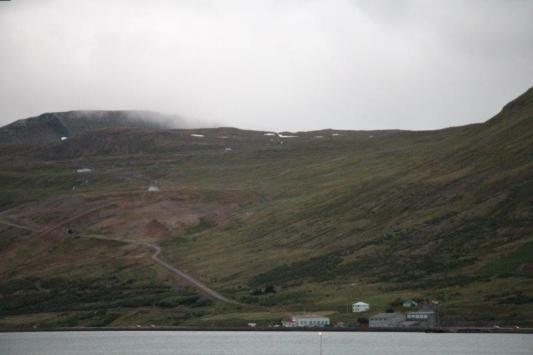 Vigur Island is 2 km long and 400 meters wide at the widest point.  Vigur means spear and the island was so named because its shape resembles a spear.  The highest point of the little island is 63 meters above the water.  It is a breeding ground for four kinds of birds; Arctic Tern, Atlantic Puffins, Eider Ducks, and Black Guillemots.  In nesting season there are 80,000 Puffins on the island, but only a few had not yet flown south and were swimming offshore.

Robert, our guide, said he was amazed at how little people know about puffins and yet everyone wants to take hundreds of photos of them.  Puffins mate for life and only come on land to breed and nest.  The single egg is incubated for 30 days, then both parents feed the chick for 30 days.  After that they stand to the side of the nest burrow (1-2 meters deep in a Y shape so there are bathroom facilities away from the nest) and wait for the chick to emerge and learn to feed itself.  We were advised to stay on the mown grass and not go into the long grass along the island edge as it will be chock-a-block full of puffin nest holes. 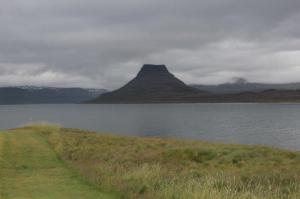 Horse Mountain. So called because if you sail down the fjord along side it the back looks like the head of a horse.  It is not a volcano. 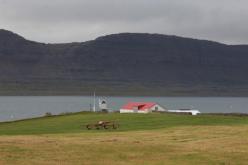 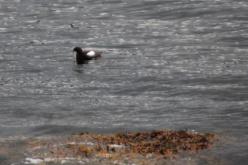 Vigur Island is privately owned and has been in the same family for 140 years.  There are 4 year-round inhabitants (if their daughter is home from school on a weekends or holiday) and about 10 people in summer.  The family were sheep and cattle farmers as well as Eiderdown collectors.  They quit caring for the cattle in 2008 and sold off all but 20 of the sheep in 2010.  They now concentrate on Eiderdown and tourism.  They have built a café to provide coffee and cake to the tourists who come several times a day all summer long, mostly from cruise ships.  The island is home to the smallest post office in Iceland and the only remaining windmill in Iceland.  There is a little gift shop, a guest cottage at the other end of the island and a small shed you can go in to see how they clean the Eiderdown for the market. The family collects between 50 and 60 kilograms (110-132 lbs) of down each year.  Each kilogram sells for 200,000 Iceland Krona (about $1400 X 55 kg = $7700 per year).

Eider ducks line their nests with small downy feathers taken from their belly.  When the momma bird leaves the nest a couple of times a day to get water the collectors will snatch some of down, which she will then replace.  When the chicks grow up and leave the nest all of the down is gathered up.  It is put through two different machines that remove a lot of the straw and other material and then cleaned one last time by hand.  The final result is a thick mass of very soft, very tiny feathers which weigh almost nothing.  They must collect a lot of feather down to add up to one kilogram (2.2 lbs)!  No wonder Eider down jackets and pillows cost so much.

About 50 or 60 years ago the owner built a rock wall not too far from the rocky shore.  If you come from the field side the fence looks like any other low rock wall. Step through an opening in the fence and you will see the Eider Hotel where the builder created nooks along the bottom of the fence to encourage the Eider duck to nest.  If an Eider duck finds a good spot to nest they will return year after year. Robert said he had been told there was a 70% occupancy rate at the Eider Hotel this year. 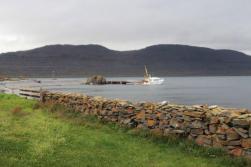 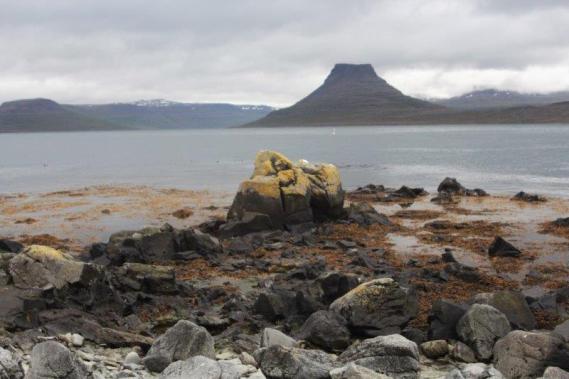 Vigur is called Paradise Island because it is a perfect little spot.  There is actually a fresh water well near the shore that has no taste of salt and is extremely cold.  The house has electricity provided via an underwater cable.  They also have telephone and internet.  On a good day it is only about 30 minutes into Isafjordur by boat. 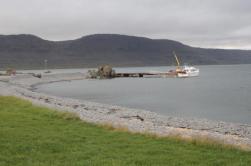 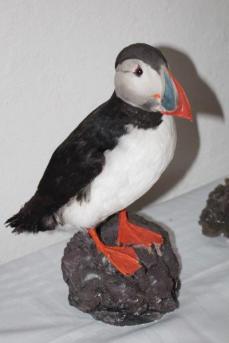 I loved all the smooth rocks.

The captain had been worried that he may not be able to dock the ship and we would therefore have had to get to shore by tender.  He also considered that he may have to cancel the port of call altogether since the winds funneling down the fjord were so strong (30 knots).  We noticed on the ride back to Isafjordur that the tour boat was being pulled quite heavily by the current.  We asked Robert what the current rate is.  He said 18-22 knots!  Holy cow.  That is the top speed of our ship.  Don’t fall overboard; you would be swept away in no time at all.  We will be fighting the current out of the fjord as we leave so we won’t be going very fast while we have dinner.  The captain also warned that the winds will pick up again and the ride will be rocky all night and during our day at sea tomorrow.  Good thing we don’t get seasick.

John and I both felt we should walk the kilometer into town and look around, and we did go part way, but it was windy and cold and drizzling and we were damp and cold.  We went back to the ship for some hot soup and a warm-up time; deciding we would monitor the weather from the cabin and decide a bit later if we wanted to go out. The wind got worse, the rain became steady and we stayed put.

At dinner tonight the ship was rocking quite a lot even though we were still sheltered by the mountains either side of the fjord.  Once we hit open water though wine glasses and cups were cascading here and there and everywhere in the dining room.  About 20 minutes later the ship’s speed slowed right down.  I’ll bet the dining room manager was on the phone to the bridge saying, “Slow this ship down before we lose all the dishes! Please!”  The Holland America singers and dancers are supposed to be doing a brand new show tonight.  That may be a challenge.  It will be rock-a-by-baby tonight.