Today was a total mixed bag.  We saw nature, history, and horticulture.  It was a full day, but a very enjoyable one.  And, as you can see from the photos, it was a lovely sunny day in St. John.

After breakfast we began to work through our list.  First – Fort Howe Lookout.  Since the sun was shining we decided to see the panoramic views of St. John in case clouds rolled in later.  There is a replicated wooden blockhouse at the site of Fort Howe and, yes, the view was pretty nice today. 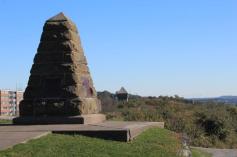 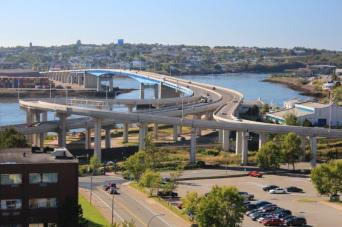 We wanted to see the Firefighter’s Museum which is housed in an 1840 firestation downtown. They had artifacts and information about the Great Fire of St. John in 1877.  Unfortunately it was locked up.  There were no signs or anything on the door.  Too bad. it would have been interesting.  St. John has had about 4 devastating fires in it’s history. 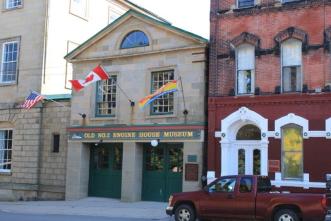 Since we were downtown we decided to wander awhile.  We made our way down several blocks to the river pier where two cruise ships were berthed, then climbed the hilly streets up again. We rounded a corner and there was Barbour’s General Store.  This was a little museum set up like a nineteenth century general store.  It contains over 2000 artifacts.  My information said it would be closed so I was pleased to be able to go in and have a look.  After that we made our way back to King’s Square where Poppy was parked. 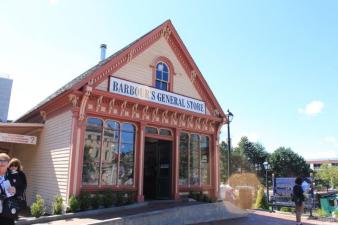 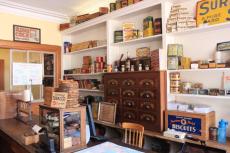 Low tide at the Reversing Falls was at 1:27 pm so we had Stella take us back to the observation point in time to see the water run under the bridge in the other direction.  When Samuel Champlain arrived here with 100 settlers he was impressed with the deep harbour and surrounding area but the leader of the expedition and the others with Champlain feared the reversing falls (actually more like rushing white water, although there is a lot going on under the surface when the river and ocean water’s collide twice a day) and refused to settle here.

After watching the river empty into the bay we departed for the Carleton Martello Tower.  We had wanted to investigate one of these towers in Quebec City but they had an Ipad system you carried around and used to touch the bars and it would bring up the information. Supposedly.   Didn’t work worth a darn and I just gave up, looked around at stuff and left.  This National Historic Site had a good presentation of the various significant events in the life of the tower and a great 10 minute film.

Britain built over 200 Martello towers in England and many others in her various colonies.  The towers are round with a single solid column in the middle that supports the arched roof.  They are two stories and housed about 12 men.  Entry was gained through the second floor and the first floor, accessed only from inside, housed the magazine where the cannon balls and gun powder were stored. 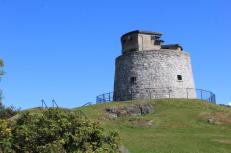 Most of the Martello towers were built near a coast to protect harbours but the St. John one and the Quebec City one were constructed to protect against invasion by land.  The construction design was ‘borrowed’ from the French after a similar tower in Martello, Corsica successfully resisted British attack: smooth round cannon balls just bounce off the thick round walls. (Martello Towers became obsolete in about 50 years once rifling the bore of cannons became commonplace.  This would cause the bullet-shaped shell to spin and it would subsequently cause tremendous damage)

During WWII when the Carleton Martello Tower was already designated a National Historic Site the army arrived one day and added two stories of concrete bunker on the top of the tower.  Needless to say Parks Canada was unimpressed but it was during a World War and the army had the authority.  The trouble is the army won’t remove it except by blowing the whole tower up so it is still there.  We were able to go to the top and there was a fabulous view. 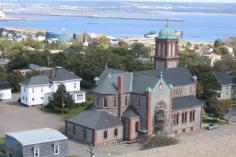 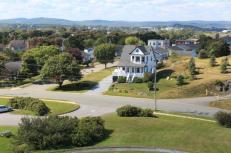 The final item on our list was The Public Garden.  I know it is getting late in the growing season to see many blooming flower beds but we had the time so I wanted to go see what I could see.  The Public Garden was opened in 1893 and is a lovely spot to sit and soak up the sun; which we did. 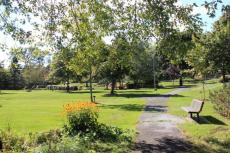 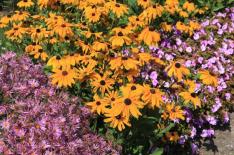 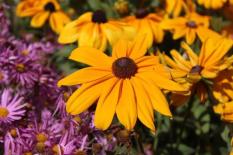 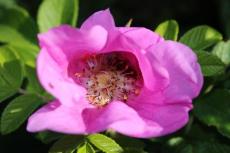 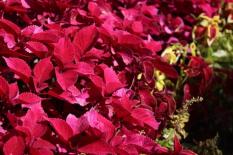 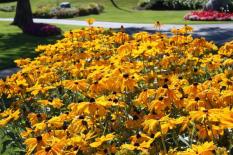 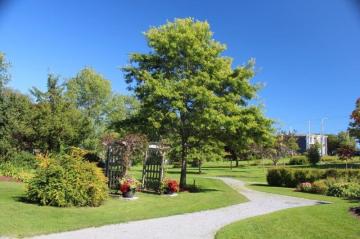 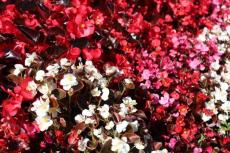 After photographing the flowers we sat in Poppy for a bit to rest our feet.  John checked out the map for future routes and I read my book  then we drove back to the Reversing Falls to view the reversal of the water.   Between high tide and low, and low tide and high there is a point in time called the Slack when the water becomes still and quiet because it has all moved in the one direction or the other.  After that moment the tide shifts and the water moves the other direction.  It was pretty cool to see happen.