We left St. John’s in the third day of sunshine in a row – a Newfoundland record since we arrived.  We connected up with Highway 1 WEST – it was actually a bit strange to go west; we have been going east for so long.  Our plan for the day was to drive the Cape Shore and loop around to Plancentia.  Our ferry ride back to Nova Scotia leaves tomorrow afternoon from Argentia, just a couple of km further up the road from Placentia.

Once we left the TCH and headed down route 81 we were back in the same flat grassland we saw on the Irish Loop to Trepassey.  We were happily enjoying the view of the little lakes, with the grass and brush contrasting with the beautiful blue sky and, suddenly, the pavement ended. 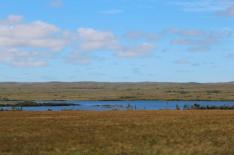 No indication on our road map that part of the road was gravel.  The sign said gravel for 8.5 km.  Well, it was pretty smooth gravel; compared to the enormous potholes and chewed up pavement we usually drive on the road was actually not too bad.  Then…..we arrived at a construction zone and we were no longer driving on gravel we were navigating a crushed rock course.  My goodness. Newfoundland wins the prize for the worst roads in Canada, hands down after today.  I kept waiting for one of poor Poppy’s tires to blow.  Needless to say that 2 km was taken very slowly!

We arrived at the bottom of the spit, drove through the little town of Branch and down the side road to Cape St. Mary’s Ecological Reserve – the most accesible seabird colony in North America.  A wide variety of birds nest here in the spring but now there are only the Northern Gannets left.  The young are expected to begin flying any day now and by the middle of October all the birds will be gone. 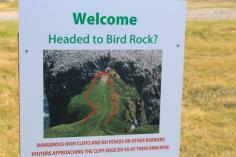 A 1.4 km trail along the cliff top leads you to Bird Rock, a 100-meter high (328 ft) sandstone bank where the birds congregate by the thousands.  The noise was incredible and it wasn’t breeding or nesting season with all the other birds around to make it worse.  So very, very cool to be about 50′ away from a bird colony and at the same level.  The space between you and them is a long sheer drop so you don’t want to go near the edge. 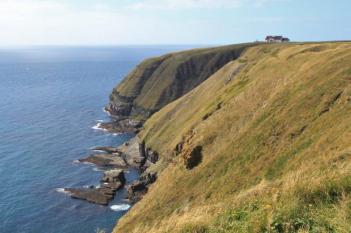 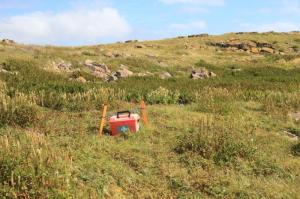 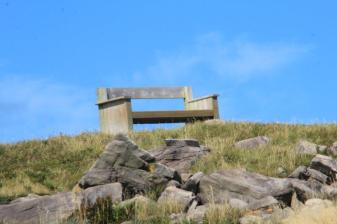 Do you see the two young ones? 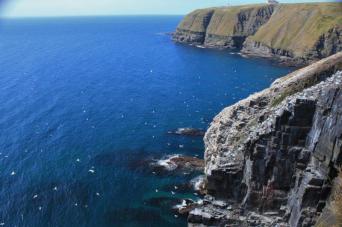 After we finished photographing the gannets we headed up the north side of the spit, past the purple-based cliffs near Gooseberry Cove.  I wanted to get into Placentia early enough to go to the National Historic Site of Castle Hill, the massive 17th century French fortification guarding their fishing community.  Today was the last day of the season it would be open; until 6 pm the brand new 2014 Newfoundland Tourist Guide informed me.  But….I guess no one informed Parks Canada because the gate was closed and locked.  Missed another one!  Oh well.  Life goes on. 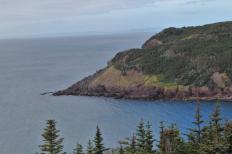 We turned around, drove back to Placentia and checked in to our hotel.  Our overnight ferry ride back to the mainland leaves Argentia at 5 pm tomorrow afternoon, but we have to be there at 3.  We plan to drive back on Route 91 to see the gorge and waterfall at Cataracts Provincail Park in the morning.  The ferry ride is 15 hours (or more if rough water slows the crossing).  We are due to arrive in North Sydney, NS about 9:45 am September 12.  From there we drive the Cabot Trail of Cape Breton – hopefully we will be blessed with another nice day.