Warning:  Another long blog.  Too much interesting stuff!!!

Our plan for the day was to drive from Antigonish, near the eastern end of mainland Nova Scotia, to Sydney, on the SE end of Cape Breton Island.  We were going to go via the southern side of Bras D’Or Lake, the huge lake that almost cuts Cape Breton in half, but somehow made a wrong turn and ended up driving the north side.  This worked out well – the north side is designated as a Scenic Drive and we were fortunate to have nice weather again today.

Two thirds of the way up the lake – which is full of inlets and islands – is the town of Baddeck where Alexander Graham Bell and his wife lived for many years in a large house called Beinn Bhreagh, Beautiful Mountain in Gaelic.  The house is still owned and lived in by his descendants.  The museum was a lovely building in a large park-like setting. 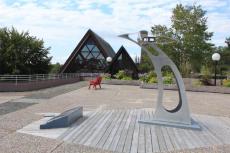 We, like everybody else, knew that Bell invented the telephone.  What we didn’t know was that he was a modern-day Leonardo Da Vinci!  The Interpretive Center at the Alexander Graham Bell National Historic Site was a VERY large building  chock-a-block full of information on Bell and his experiments and inventions.  I would have to write, write, write and write some more to tell you all we learned about Alexander Bell.  I will spare you, but I am inserting photos of some of his inventions and the cards with the information about them so you can skim through them at your leisure and get a grasp of the man’s genius.

I will tell you this:  His father  Melville Bell created, in 1864, the Visible Speech Phonetic Alphabet to teach deaf people to talk.  His grandfather was a man devoted to Elocution and taught proper speech. Aleck spent a summer with his grandfather and he credits that time with giving his life direction and a purpose.  He  was devoted to helping the deaf his entire life. 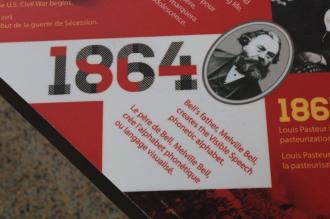 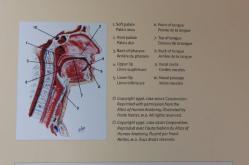 After the death of his two brothers from TB the family moved from Scotland to Ontario in 1870 when Bell was 23.  He had great success using his father’s Visible Speech techniques to help the deaf learn to talk, or to talk better and was hired by the Boston School for the Deaf in 1871.  At the age of 30 he married Mabel Hubbard (age 20) who was one of his students and was devoted to her his whole life – they died within 9 months of each other.  Mabel lost her hearing at age 5 from scarlet fever.  She could speak but Bell greatly improved her pronunciation and elocution.

He patented the telephone in 1876 and in 1877 formed the Bell Telephone Company. His wedding gift to Mabel was 90% of the stock; he retained the other 10%.  Mabel managed all of his business affairs, financed the AEA – Aerial Experiment Association of Bell and four young flight enthusiasts, and took an interest in many of the experiments and inventions, even flying in some of the early kite-planes developed by the AEA. 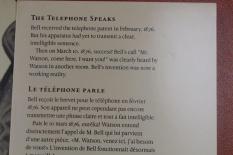 In 1879 he invented the audiometer which detects hearing loss or residual hearing.  1880 he invented the photophone which transmits sound on a beam of light.  The graphonophone, which was an improvement on Edison’s phonograph and was powered by a treadle sewing machine, was sold commercially in 1887. 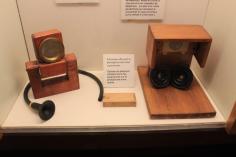 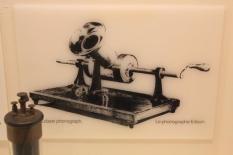 In 1888 Bell co-founded the National Geographic Society and was invited in 1916 by President Taft to participate in a League to Enforce Peace, a precursor to the League of Nations and the United Nations.

He also invented the metal detector and tried unsuccessfully to locate the bullet in President Garfield after he was shot.  The President was lying on a metal-framed bed which caused static.  Bell requested that the President be moved to another bed not made of metal so he could get a better reading, but the skeptical physicians refused.  Garfield died of his wounds. 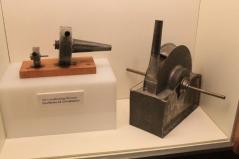 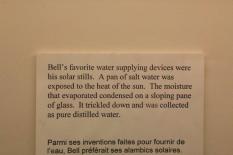 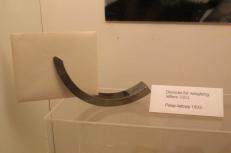 He developed the principal of tetrahedral (using triangular shapes) construction.  A 1300-cell tetrahedral kite flew supporting one of his AEA associates.

The group captured the Scientific American Cup for the first flight over 1 km in Hammondsport, NY in 1908.   In 1909 the Silver Dart was the first successful powered flight in Canada.  She lifted off the ice and flew 800 meters.  Bell also invented the hydrofoil and in 1912 the HD-2 clocked 50 mph.  The HD-4 set a marine speed record of 70.86 mph (113 kilometers per hour). 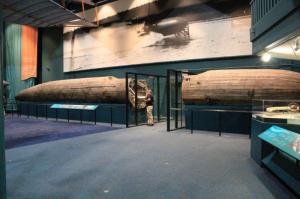 And that truly is the SHORT version!  Honest.

We finally continued on our way about 2 hours later; climbing over Kellys Mountain, a continuous rise of 267 meters with lookouts on both sides of the top, and then down the other side to Sydney. 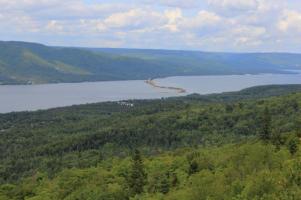 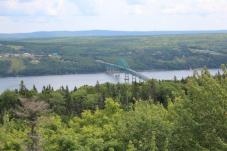 We are spending two nights in Sydney but we drove on by the town without checking into our hotel because we wanted to go to the Miners Museum at Glace Bay, 16 km away.  Glace Bay, and many of the towns of Cape Breton were coal mining towns – Company towns, where in the 1920 and 30’s you earned 68 cents for every ton of coal you sent up the to the surface.  The Company owned the house you lived in, the water supply, the electrical supply, and all the stores.

You purchased all your tools from the Company store, your blasting powder and everything you needed to do your work and to care for your family.  Usually when you got ‘paid’ all you received was an envelope showing all you owed deducted from all you earned putting you constantly deeper into debt to the Company. They used this leverage to force longer hours (10 hours day shift; 12 hours night shift – 6 days a week), and regularly cut wages.  The Company spent as little as was necessary on maintenance and safety in the mines.  If a man was injured or killed, his family would be told they needed to send some one to do his work or they would be evicted from the house and it would be given to someone who could do the work.   This often forced boys as young as 8 to leave school and work in the mines.

The youngest boys were Trapper Boys who would open the doors between the air vents as miners moved in and out of the mine for their shift.  They sat alone in total darkness for 12 hours for 65 cents per day.  As they aged they would work with the Shetland ponies that hauled the coal carts to the surface before advancing to shoveling coal, getting 17 1/2 cents for each 2 ton cart they brought up.

The miners tried several times to unionize and get better conditions and wages but their strikes were broken violently every time.  It wasn’t until after WWII that they succeeded and their wages were returned to the same level they had lost in the mid-1920’s!

We put on our hard hats and our poncho slickers and traveled into the mine with our ex-miner guide. We went down 65′ with decreasing height in the tunnel as we descended so we were bent over as we moved along.  This is how the miners worked every day.

The Miners Museum was opened in 1967 at the suggestion of a local woman to help all the out-of-work miners after the government shut down all the mines. The coal seams along the coast of Cape Breton extend far out to sea and the mine at Glace Bay had reached 6 miles out with a depth of 2700 feet below the seabed and was now too expensive to viably extract the coal.  It took 2 hours to get to the working face of the mine each day.  Our guide, Sheldon, had great stories and really painted a vivid picture of the conditions of the miners in those early years.

So….our brains are full and you have wisely skipped quickly to the end of this Social Studies lesson and we can all go to bed now.  Tomorrow – Louisburg, the French fortress and the largest restored fort in North America with over 50 buildings.  Can’t you just wait??