We attended church this morning at the beautiful Summerside Presbyterian Church before venturing out on our travels. 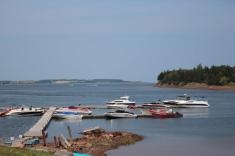 Since we are in Prince Edward Island I think it is mandatory to go to at least some of the Green Gables attractions.  Lucy Maud Montgomery was born in New London, PEI and wrote the famous novel, Anne of Green Gables in 1908 while living in Cavendish.  It has been translated into over 30 languages and is a beloved story all over the world. 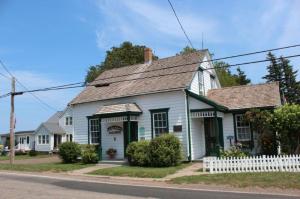 All of the L.M. Montgomery sites are along the east shore around the town of Cavendish.  Entrepreneurs have built a popular attraction called “Avonlea-The Village of Anne of Green Gables”  – the fictitious town where Anne – and you can spend the whole day making sand castles, going to ‘school,’ riding the horse-drawn wagon, having a tea party  and immersing yourself in all things Anne. 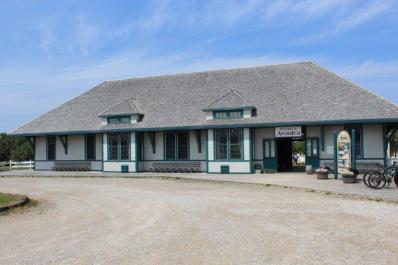 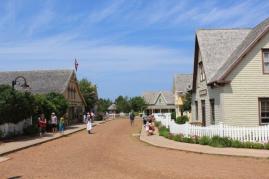 We can still walk on stilts.  See John above  behind the sand castle.

This was a Presbyterian Church that L.M. Montgomery attended and was purchased and brought to Avonlea for preservation 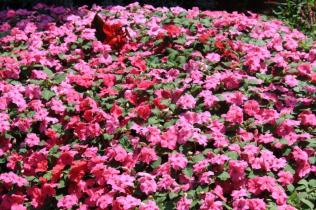 By 1920 her aunt and uncle, on whose house Green Gables was fashioned, were renting out spare bedrooms to overnight guests who wanted to see “where Anne lived.”  In 1937 Parks Canada purchased the land and the house and it was incorporated into the Prince Edward Island National Park. 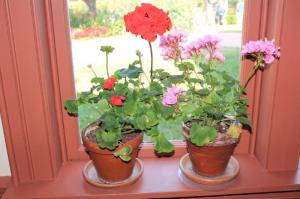 My daddy used to keep geraniums on the windowsill too.

After we left all-things-Anne we drove along the coast road in PEI National Park to check out some more of the beaches and shoreline. 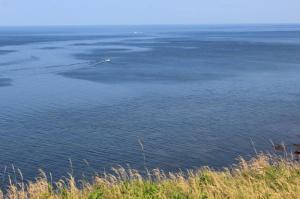 Then it was an easy drive to Kensington where we had dinner at the Island Stone Pub, which used to be the train station, and on to Summerside for our last night.  We return to Charlottetown for two more nights before we leave PEI.  We will finish the drive along the Green Gables Shore on our way to Ch-town and see the things there that we want to see before, hopefully, having a down-day to plan our next province, Nova Scotia.