Today was a short day, which was nice to have after the long drive yesterday.  We only went 227 km today.  And….miracle of miracles…. it was sunny!  Well, mostly sunny (notice that I didn’t say warm as well because the cool wind was still blowing).  But we seem to have been dragging a dark cloud behind us since we left Calgary (sorry about that Saskatchewan and Manitoba; we didn’t mean to flood you out, honest).  It was so nice to see blue sky and white clouds instead of dark grey.  The glimpses of Lake Superior through the trees looked so much nicer today with blue water instead of grey water melding into grey clouds.

It is quite amazing to think that we have been driving the coast of a single lake for two days.  And part of the northern coast is located in the US so the shoreline is even longer than we have seen.  Thunder Bay marks the northwesternmost point of the Lake in Canada and Sault St. Marie is the southeastern end.  If you go through the Sault locks you are in Lake Huron.  And if you cross the bridge (which is a Cdn/US customs post) you are in Sault St. Marie, Michigan (population 12,000 or so).  The Ontario city of the same name is quite a bit bigger, being 78,000.

Our hotel in Wawa last night was about 8 km east of the town so after breakfast we had to backtrack a bit to see a couple of things we wanted to check out.

First was The Mission, properly called Michipicoten River Village the area’s original settlement, founded in the 17th century by fur-trading voyageurs.  Up the road from the Mission are Silver Falls, the Mackenzie/Bethune Cemetery and a nice viewpoint overlooking Lake Superior.

The cemetery was located down a 100 meter trail in the mosquito infested bush.  There were only three markers for the dozen or so grave sites there.  One belonged to the cousin of the famous explorer Alexander McKenzie who was also the great grandmother of Dr. Norman Bethune who started the first mobile blood transfusion service during the Spanish Civil War and later went to China to train medical doctors and open hospitals. 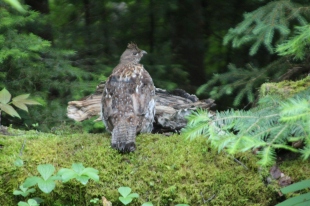 Silver Falls (Upper and Lower) were located either side of a small bridge. There are huge warning signs that the area is part of a spill way for a hydro-electric dam further upstream and water levels can change rapidly with no warning: therefore do not go down on the stream bed!  And true to the EFM (Except For Me) rule there was a couple and their little girl wandering around  on the rocks!  Silver Falls is not spectacular as many waterfalls go, but it was nice.

Lower Falls  I didn’t take any photos from the viewpoint, though it was a nice view of Lake Superior. Having taken photos of large expanses of water before I know how boring they look to me later.

We drove another 3 km back toward Wawa for our final waterfall of the day: Magpie High Falls, which are right at the dam spillway.  We had a bumpy 3 km drive up there over some serious washboard.

A nice spot of color 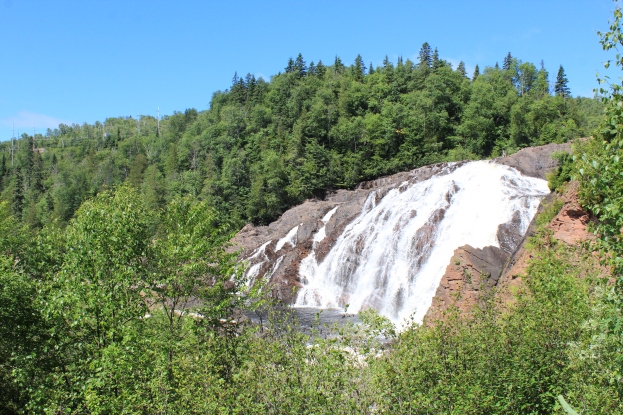 Our only other stop on today’s short journey was at Old Woman Bay on Lake Superior where I had to stand in the water as I had done in Lake Winnipeg.  Believe me, Lake Superior is MUCH colder! 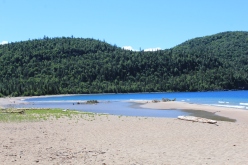 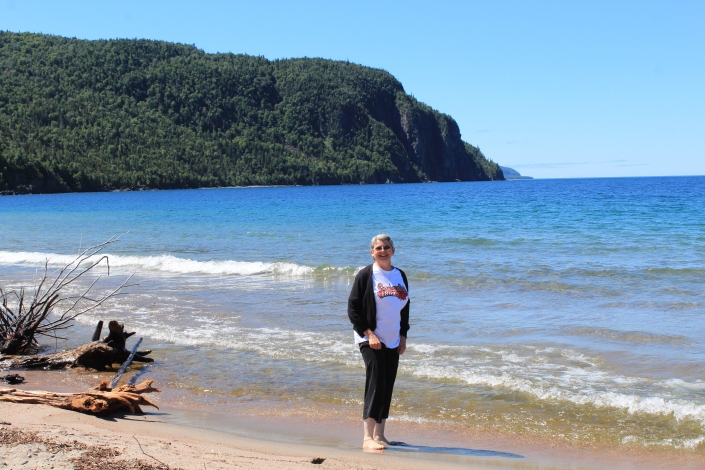 After that it was a straight drive into The Sault (pronounced SOO) for a leisurely afternoon and a wonderful dinner at Giovanni’s.