You can always tell when I have a great day by the abundance of photographs I put into my blog!

We visited the city of Québec in 2014 on our drive across Canada and spent our time on the Plains of Abraham and the Citadel (There is  a blog on that trip if you wish to check it out.)  Today we spent about five hours wandering around Old Town Québec.

Old Town is the original walled city built by the French after Québec was discovered and claimed for France by Samuel de Champlain in 1608.  The streets are narrow and are bordered by old stone buildings, many of which have been in constant use for centuries and others that have been re-built several times.

St. John’s Gate is Door #1 into the walled city.  There are several gates that give access to Old Town as you wander around the city. 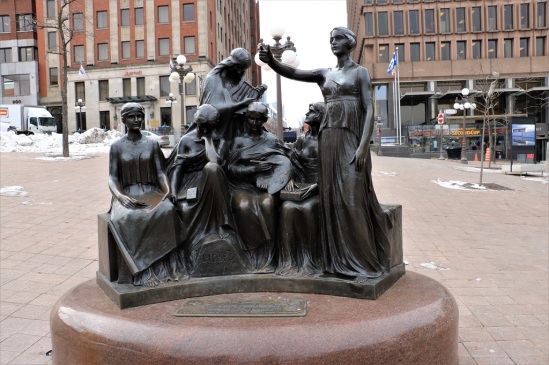 The  Muses  – representing the Greco-Roman  dieties  of  the arts  and  letters:  Architecture,  Sculpture,  Poetry,  Painting,  Music,  and  Eloquence.

There is a large skating rink set up in the center of Place D’Youville.  We walked out of our parking arcade just up the stairs from here.  The Palais Montcalm Concert building overlooks the square.

Our geocache hobby is a great way to see places like Old Town Québec.  There are regular caches, Earthcaches and Virtual caches all over the place.  We followed the map to several of them and it gave us a really good overall look at the area.

All the shops and hotels were decorated, or are in the process of being decorated, for the Christmas season.  We saw many, many lovely displays. 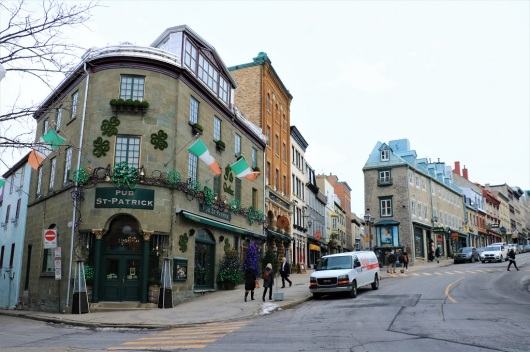 Right where I stood to take this photograph of the St. Patrick Pub there was an historical memorial to three-generations of a family who recorded the changes in Québec.  Between1854  and  1953  they  amassed  over  300,000  negatives  and  over 500,000 photographic prints! 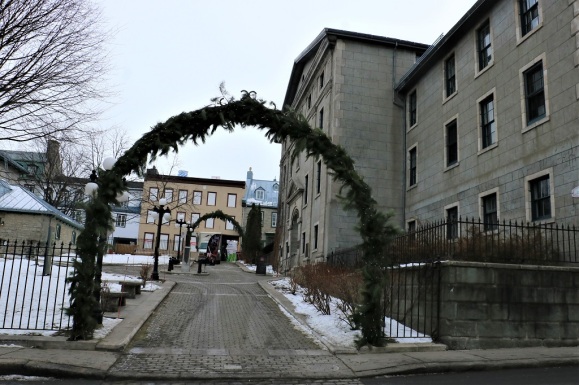 The section of the city behind these arches is where the first Anglo-Saxon inhabitants lived and worked and set up shop. 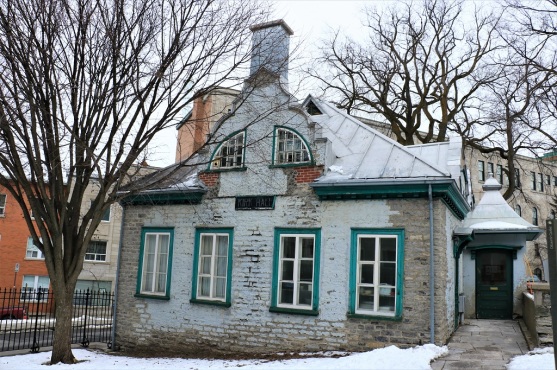 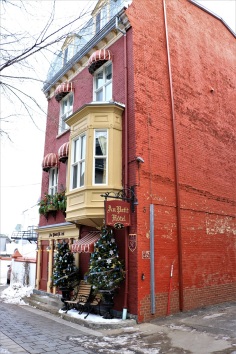 This memorial was to honour the 12 men from Québec who died fighting for the British Empire in South Africa between 1898 -1902. 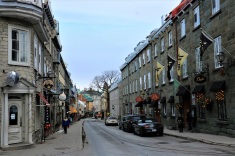 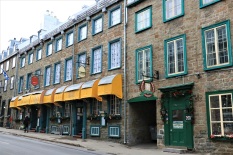 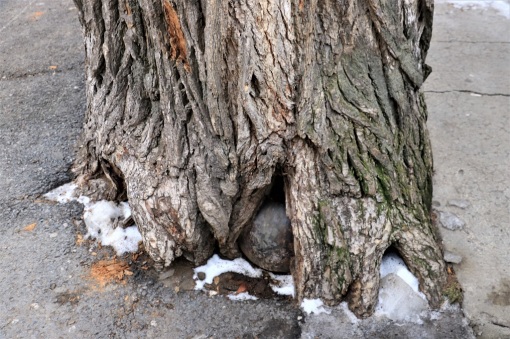 Atop this wall is the Citadel and the Plains of Abraham; which were farmer’s fields and the site of the Battle of Abraham during the Seven Years War between Britain and France from 1756-1763.  During the battle in 1759 the opposing generals – Wolfe for the British and Montcalm for the French – were both mortally wounded.  The consequences of the battle were the surrender of the French to the British and the loss of Québec; and led eventually to the take-over of French Canada by the British. 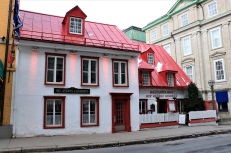 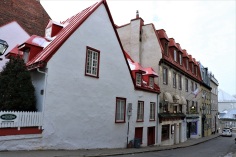 The  statue  of  the  Founding Father  of  Québec,  Samuel  de  Champlain and  a couple  of  photos of the side  of the Château  Frontenac;  said  to  be the  most  photographed  hotel  in  the  world.

A big boardwalk goes along the front of the Château over to the base of the Plains of Abraham.  On this side there is a large square with the statue of Champlain and a beautiful view of the St. Lawrence River and down below, Le Petit Champlain, a small commercial zone that runs along the river shore. 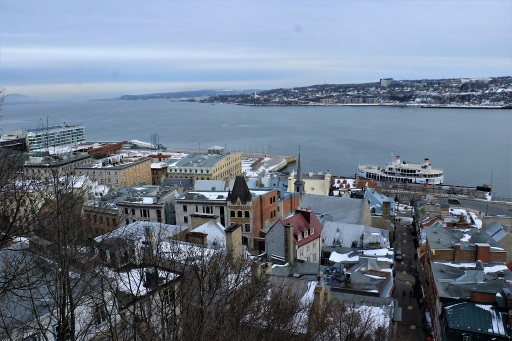 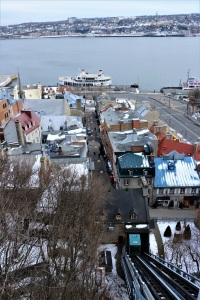 The easiest way to get to Le Petit Champlain is via the funicular. 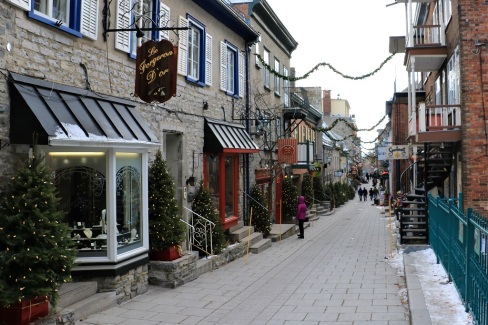 There were Christmas trees everywhere along the old cobbled streets of Le Petit Champlain, and the decorations were even more elaborate than in Old Town. 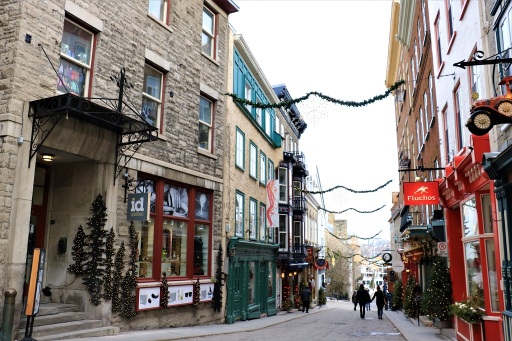 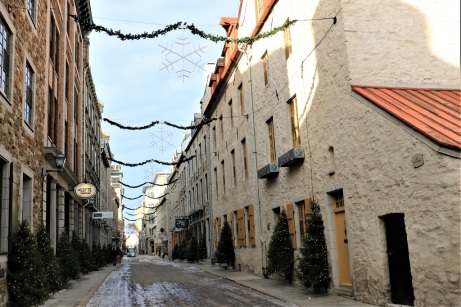 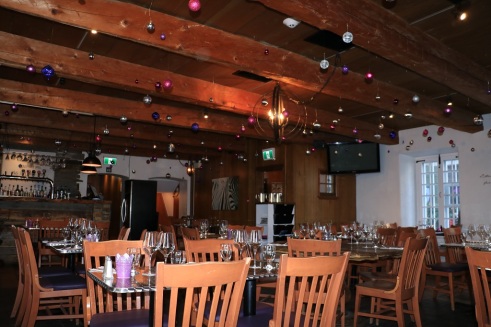 We stopped for lunch in this old timbered cafe.  The soup of the day was Butternut Peach, which John ordered.  It was surprisingly good with a sweet after taste.  I had a yummy bowl of French Onion Soup.  By then we needed a bit of warming up  and  also enjoyed  a cup  of  hot  chocolate (with whipped cream on top, of course).

Hidden in the dark space in the lower left of the building above was a little cannon geocache.  The log paper was rolled up and inside the muzzle.  It was so cute.

One of the virtual geocaches we found was called “Arrette moi si tu peux,” which translated means “Catch Me If You Can.”  (A virtual cache, by the way, is one where there is no container, nor a log paper to sign.  It is usually an historic or significant place where an actual physical cache container is not hidden.  Instead you usually must answer a question or two about the place and post a photo of yourself or your GPS at the site to prove you were there.)

This virtual used the title of the Leonardo di Caprio/Tom Hanks film because the scene where the di Caprio’s character returns to France (where his mother was from) and gets caught in a church was filmed here.  The square in front of the church is called Place Royale, 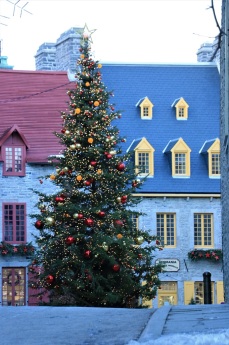 The cache description says: “The Place Royale is considered to be the oldest French site in America. It was Samuel de Champlain, founder of Québec City, who launched the construction of this fortified post in 1608, thus constituting the first habitation of Québec. The buildings served, among other things, to trade with the Amerindians. From 1687 to 1723, a fabulous construction was built: that of Notre-Dame-des-Victoires Church, the oldest stone church in North America. Destroyed by the bombing of the lower town by the British on August 1759, which was a premise for the British victory over the French and the end of the French regime in America on September 1759, it was rebuilt and reborn from its ashes (1766) . In 1929, the church was declared a historic monument and was designated a national historic site by the Government of Canada in 1988.”  Steven Spielberg used this square and church instead of finding a location in France because it is historically and visually  very typical French section of a city. 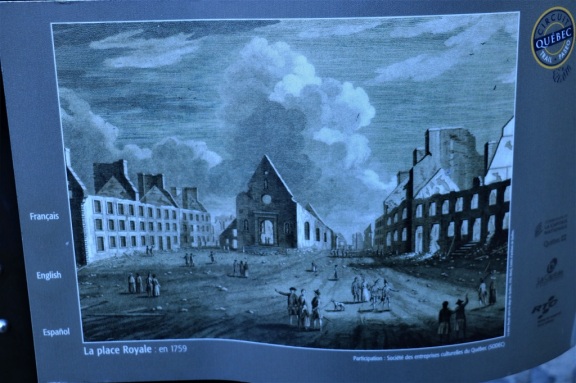 This mural was unveiled in October 1999.  It is called “The History of Québec” and represents 1500 historical figures.  It is 420 sq. meters in size and is a beautiful mixture of old and modern vignettes of the city. 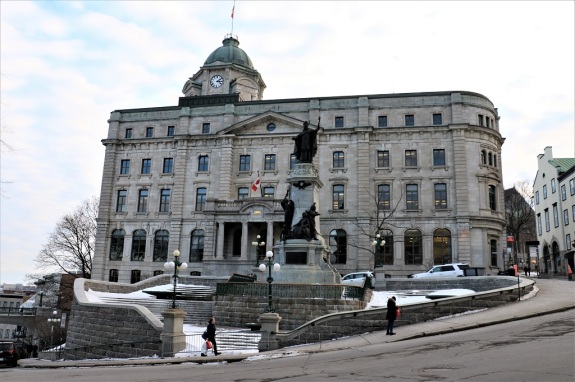 The Post Office sits alongside the steep curved road that goes from Le Petit Champlain back up to Old town.

It was time to head back to the car park and make our way to the hotel before the mass exodus of workers began to leave the city.  We walked back via a different route to see more of Old Town.

The little huts were set up for a huge Christmas market in this square and up the next street as well. 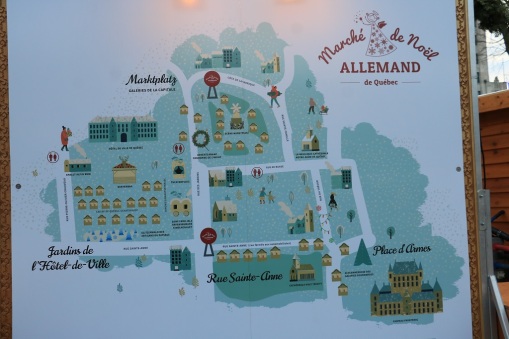 The Hôtel de Ville was draped in lights and had beautiful pots of greenery and Grinch-like figures outside.

The statue on the right is “a work paying tribute to the 11 congregations of teaching brothers that have been active in Québec since the end of the 17th century. A wing etched into stone is echoed bronze, outlining an arch that turns the mind to higher things. Behind them, two blocks form an open book in which a bronze flame relief replies to its counterpart hollowed out of the stone, suggesting the passing on of knowledge.”

We walked by an old St. Andrew’s Presbyterian Church and exited the walled city before arriving back at Place D’Youville and the car. 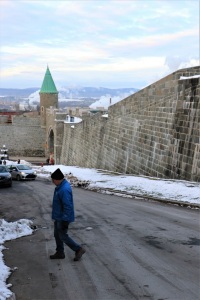 There were quite a few skaters enjoying the ice rink.  We arrived at our hotel just after four and had an expensive – $50 per plate filet mignon – dinner at the hotel.  Good thing it was delicious!