Apparently I can’t count.  I was lying in bed last night after posting my blog and wondering how I had arrived at day 10 when we left on the 9th and it is the 17th.  This morning I corrected all the Day tallies on the blogs.  You probably didn’t even notice, but now I feel better.

We woke to beautiful sunny skies but as the day wore on we got some scattered showers and by 3 pm it was pouring rain.  By then we had been walking streets and trails and climbing stairs since 10 am and my feet needed a break so we came back to the hotel to rest until dinner.

Chemainus is a small community of about 4,000 people.  It was founded as a logging town in 1858 and much of the employment in the area has always been based on the forest industry.  There was a large sawmill that was closed in 1980 which decimated employment opportunitues.  In the years since a smaller, more efficient mill has been built, but a major factor in the economic turn-around came in the early 80s when the idea was concieved to paint murals on many of the town buildings.  About 39 large and small murals were done and Chemainus began to bill itself as the “City of Murals.”  The increase in tourism dollars as people came to follow the yellow footprints on the sidewalk to see all the murals created many jobs and opened new businesses.  I was interested to see how the murals had fared over the 30+ years and was very happy to see dates and signatures of artists that had re-painted some of them to keep the colours bright and fresh.  Some are still original, some have been re-done two or three times.  They are still adding new ones and there are now 43 murals in town.

We wandered around town for most of the morning and checked them out.  You can get a map from the Visitor’s Center that will show you where they all are, but we just went up and down streets.  I have photos of 28 of the 43, but I am not going to post them all.  There will be lots though as I loved all the different styles and images.  The murals all portray some aspect of the history of Chemainus and area.  Here goes: 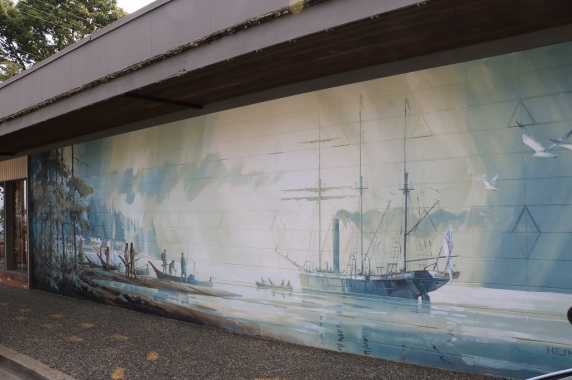 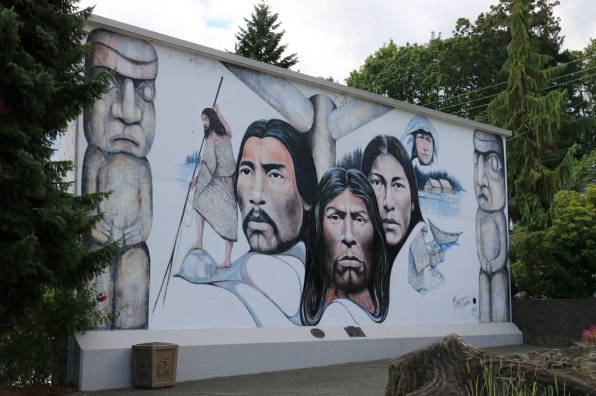 This one was one of the very first to be painted and there is a nice little Heritage Park water feature and garden in front of it now. 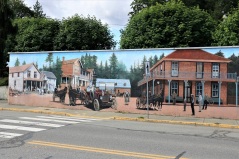 These two run side by side the full length of a long buiding. 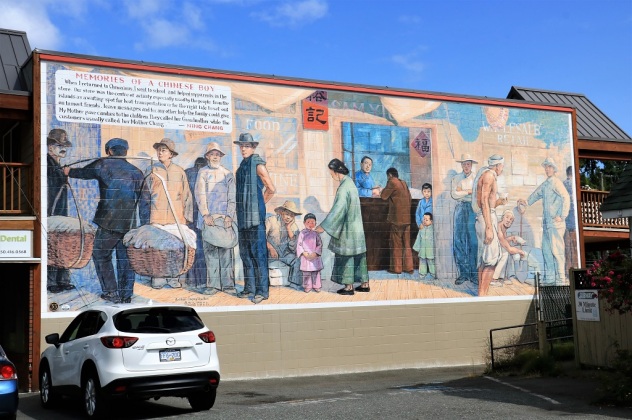 This was one of my favourites.  I really like the art style with the heavy outline on all the elements. 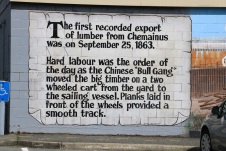 This mural also was very long.  The information square was about double the width of the little silver car so you get an idea of how long the image is. 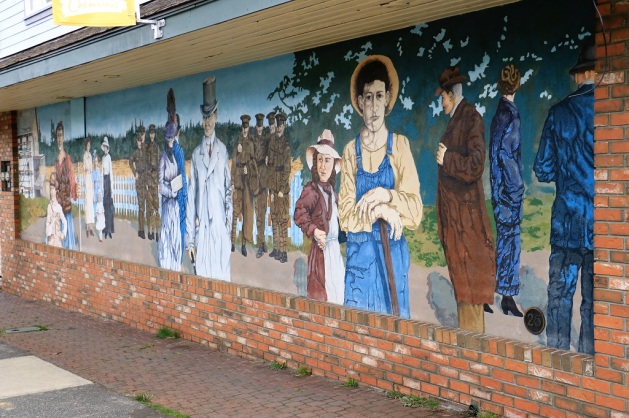 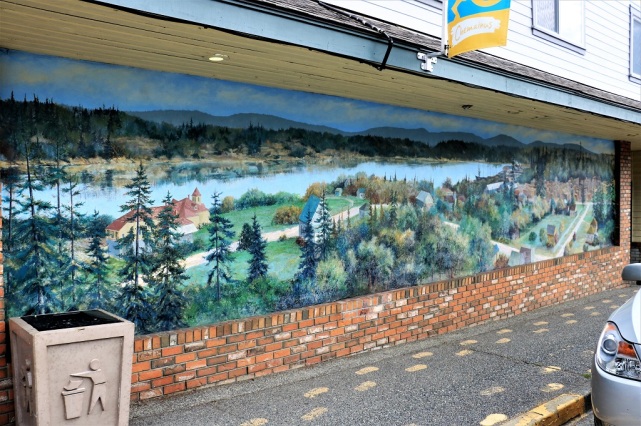 This was my absolute favourite of the ones we saw.  It was one of two commissioned in 1991 by the Japanese Canadian Redress Foundation and Communications Canada as part of the reunion of the Japanese community of Chemainus that lived here from 1900-1942; when they were all moved to interment camps in the interior or the north during World War II.  There were 300 Japanese millworkers, fishermen, and businessmen living here at the time.  The man whose house was next door to this mural saw me taking a photo of it and offered to back his van up a bit so I could get a better shot.  I told him not to bother, but it was very nice of him to offer.  I loved the delicacy of the image and the subtle colours used on this mural.  It commemorates a float made by the Japanese community and entered in a 50-year anniversary parade of the McMillan Lumber Company in 1939.  The float won first prize.

This mural depicts several different buildings and an alleyway but it is all on the side of one building.  The shake overhang on the left is real and extends around the front to the entrance of the store.  The artist did a great job incorporating the existing building with the old history.  I cropped the information square so you can read what this mural is all about.  It is another of my favourites.

The mural above shows an oxen team skidding a huge log out of the bush. The one below is a steam-powered ‘donkey winch’ that was used in later years. 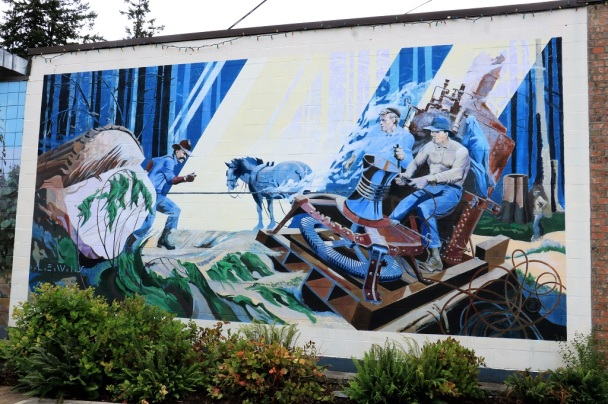 I don’t know if the real bicycle is always in front of this mural but it certainly adds a nice touch. 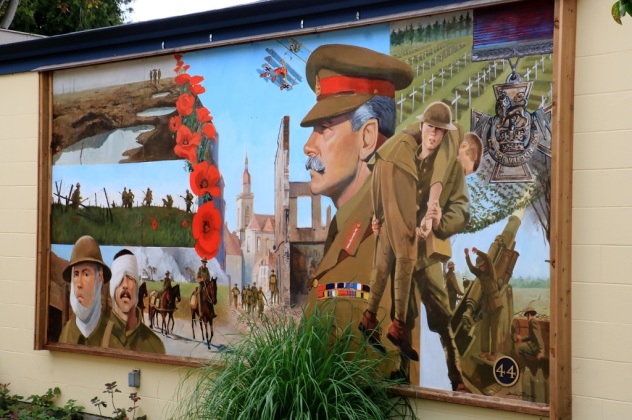 There are hydrangeas in many yards and these had huge blossoms and were a lovely colour. 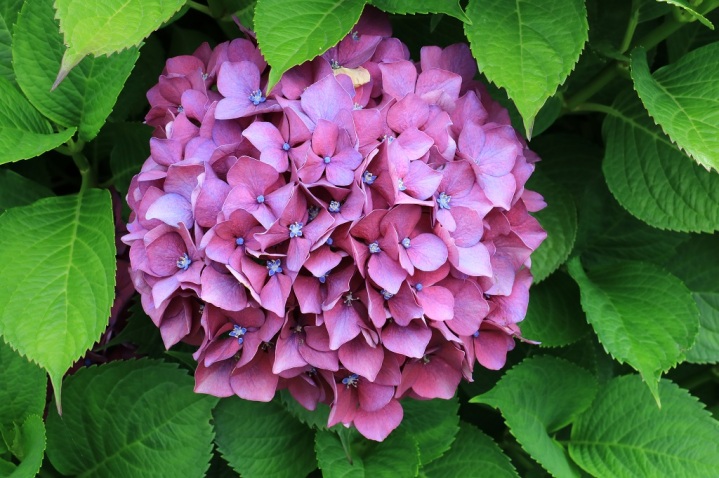 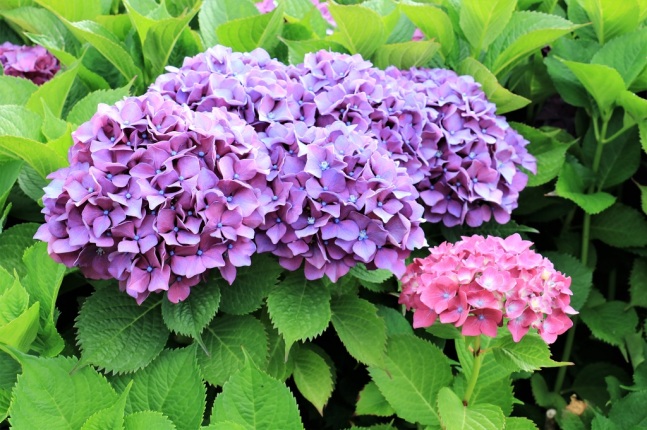 As we wandered to look at the murals we also found a few geocaches.  Our parking time limit was up so we went back to the truck and drove to some of the trail heads to find a few more caches.  We found a cache hidden at the end of a baseball field and the road was a dead end.  You could see the water so we walked down to see the view. 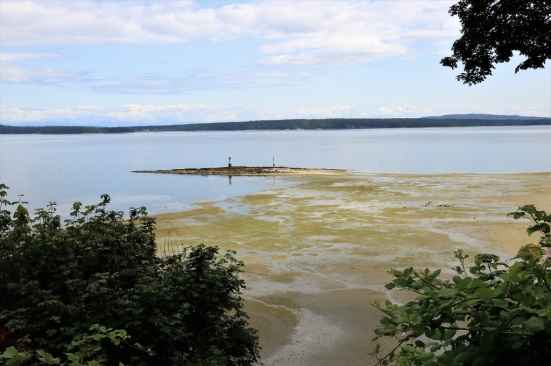 Two of the last three geocaches we found before the rain descended were on staircases down to the shore.  The first person was kind enough to hide the cache only half-way down. 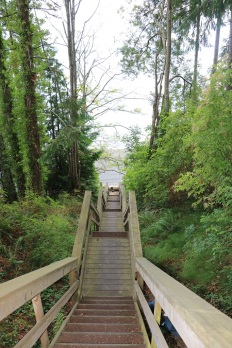 Looking up from where we came and down to the bottom.  John had to climb over the railing to find the cache hidden beside one of the support posts. 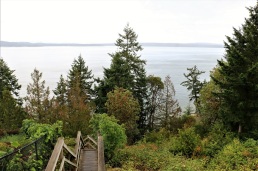 The second staircase had a nice ocean view from the top.  As we were approaching the stairs a woman arrived at the top and I said, “So, this is your daily exercise is it?  You climb these stairs three times a day.”  And she said yes, she did.  She had just completed the second set.  We chatted for a few minutes and off she went to do her third round. She said the most she had ever done was 7 times down and back up and she would never do that many again.

The person that hid this geocache put it in the bush off to the side at the very bottom of the wooden steps.  There is another concrete set that will take you directly to the shore.  We did not feel the need to do those.  I counted the steps on the way up and there are 156. 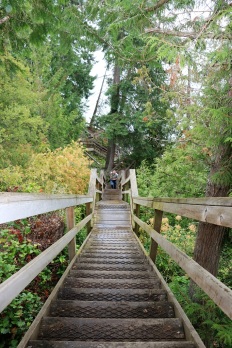 The final cache we found was the second stage of a two-part cache.  When we found the first container it had a little piece of paper in it that said REF 623.89 SOO.  Really helpful information as to where the log paper for signing the find would be located.  The description included hours of operation for the business where it was hidden.  Reading further we learned it was in the library.  I told John the numbers were part of the Dewey decimal system for cataloging library books so when the library opened at 1 o’clock we could go find it.  Which we did.  What a very clever hide.  The municipality of Chemainus parks department has also hidden several caches around the town to encourage members of the geocaching community to come and visit.  We are finding this more and more.  There is a geocache hidden right at the Visitor’s Center in Kamloops that is maintained by the staff.  Many tourist information brochures and websites give information about how many geocaches are hidden in the area.  It is now a very popular international activity. 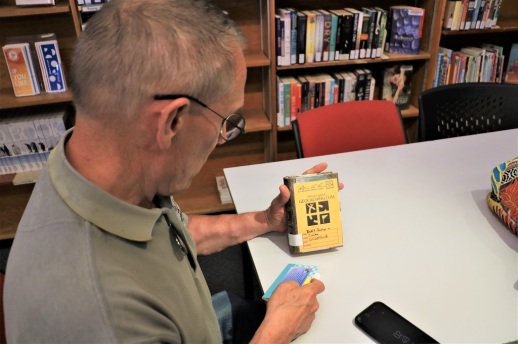 The geocache container is a small book in the Reference section and just sits on the shelf with the rest of the books.  You can see the geocache logo at the top of the spine.  The ‘book’ opens and the log paper is inside for signing.  I loved it.

We put the book back on the shelf, drove back to the hotel and dodged the raindrops to get inside and rest my weary feet for a couple of hours.  We had a great day exploring Chemainus.  (And, if you like live theatre, Chemainus has a very active and ambitious professional theatre.  They are currently doing Mama Mia from May until the end of August.  We would like to have gone, but it is sold out every night until mid-August.  They did Sound of Music in February and have a new production every 6 weeks or so right through until Christmas; which this year is Miracle on 34th Street.  I suggest you book tickets early if you plan to attend any of the shows.)

Tomorrow we drive a short distance up the road to Cedar, a small community south of Nanaimo where will spend the weekend at a family reunion.  I will likely not post another blog for a couple of days.  I plan to be too busy visiting with some very nice people.