Morella is a two-hour bus ride from the port at Castellon de la Plana.  It is one of the best-preserved and most picturesque medieval towns in Spain and is literally built around and atop a steep hill.  There are very few streets accessible to cars as the city was built in 1025, and no buses can get through the city gates so we were let off outside and walked in. 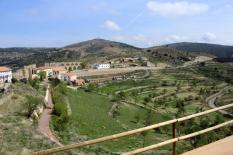 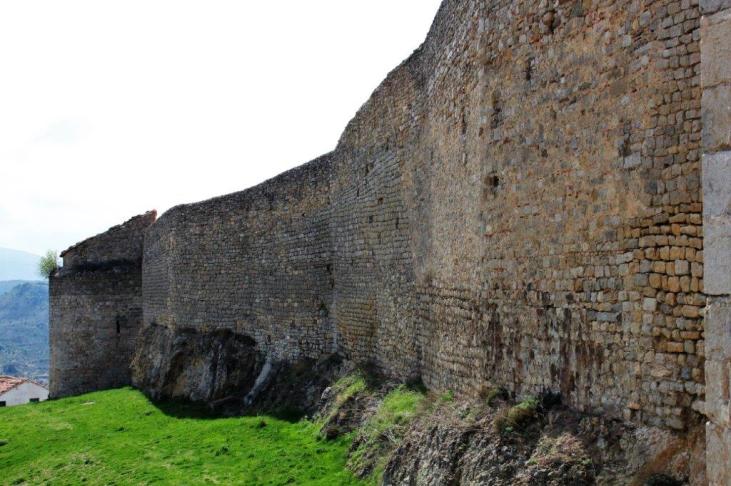 The entrance gate to the town. 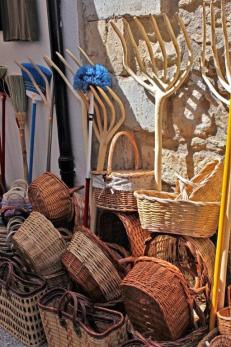 It must take a bit of searching to find a branch that can be made into such a good pitchfork.  All the baskets were hand-made as well. 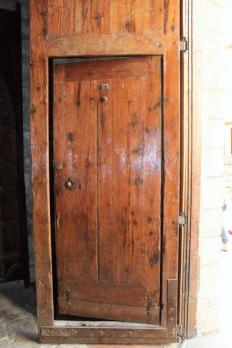 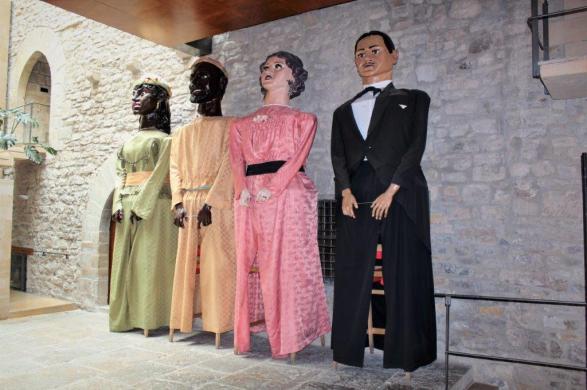 More of the huge people puppets. 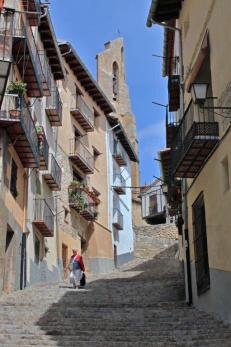 Every ‘street’ is a cobblestone stairway.  You definitely get your exercise moving around Morella. 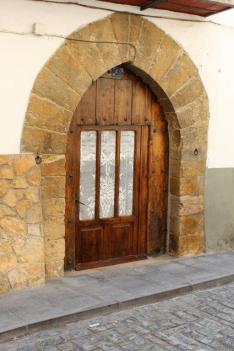 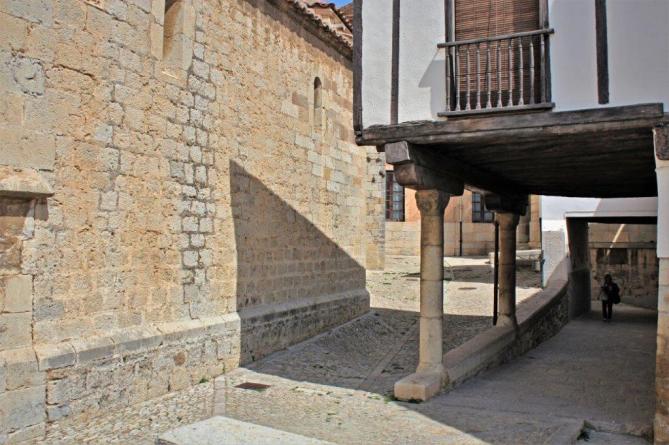 Inside the city we were taken to the Gothic-style Church of St. Mary.  If there is one thing that we are shown on virtually every tour, it is the local Catholic church.  I have never seen so many gilded, ornate, art-filled churches in my life.  They are beautiful, but my pragmatic soul always thinks of the many things that could be done to alleviate hunger, lack of education, and health care around the world if it was all sold and used for the care of people rather than adornment of a building; even if it is dedicated to God. 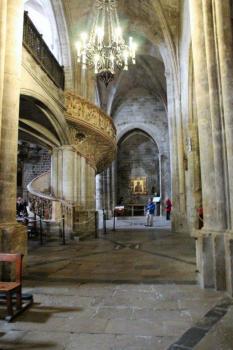 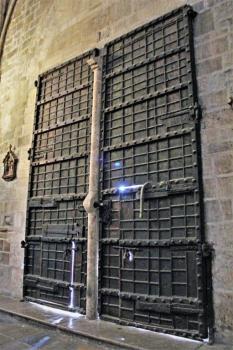 After we toured the church our guide took us down another street to a restaurant where the group was to have lunch.  We had coffee and pastries at Sant Mateu on the drive to Morella, and that wasn’t too long after we had breakfast on the ship so I wasn’t hungry.  And I certainly did not want to spend a bunch of time eating when there was an interesting, ancient city to explore.  I asked our guide what time and where I should meet the group after they finished lunch (the city gate at 2 pm) and went of to see what I could see. 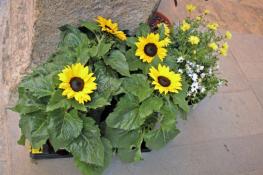 Past the church I chanced upon the entrance to the castle, paid my  €3 fee and started to climb.  The castle wound around the highest part of the mountain top and there were 360° views of the valley below. 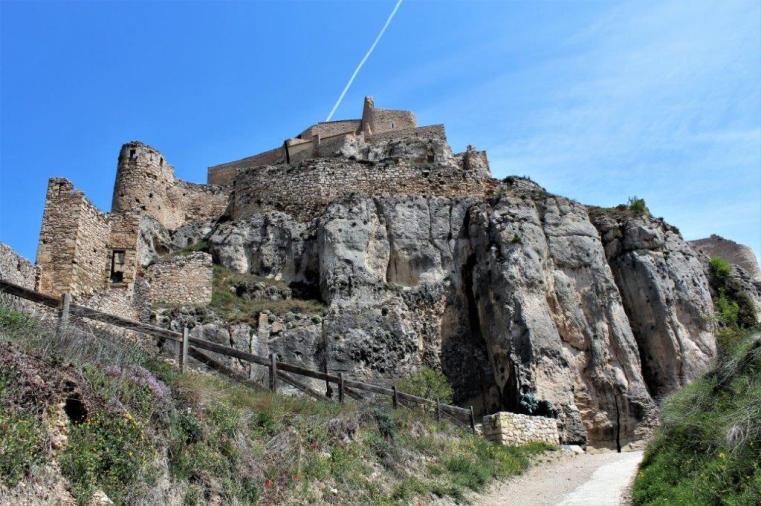 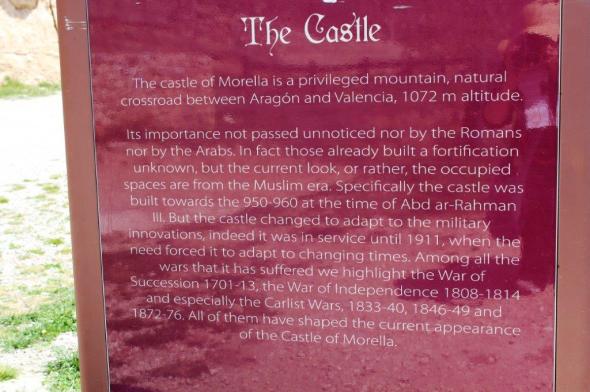 The castle is built right into the rock of the mountain. 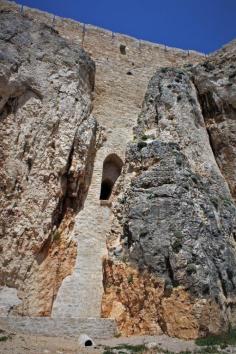 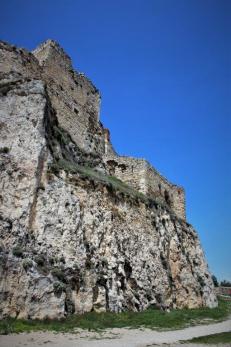 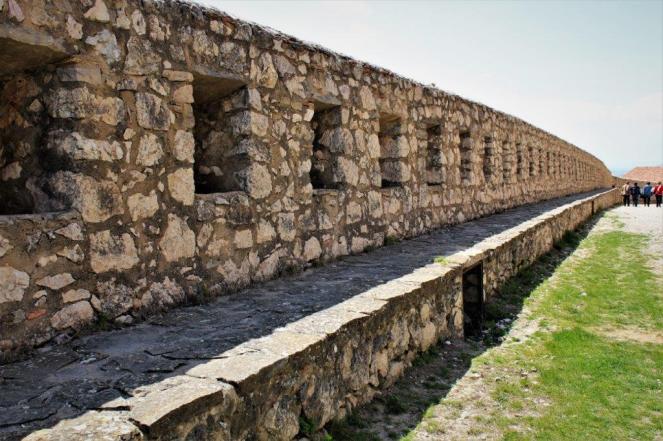 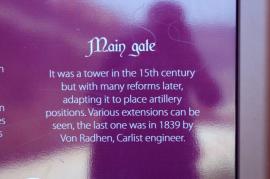 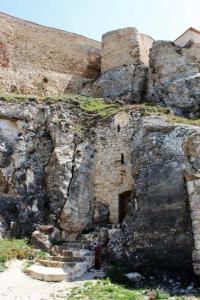 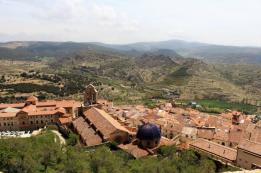 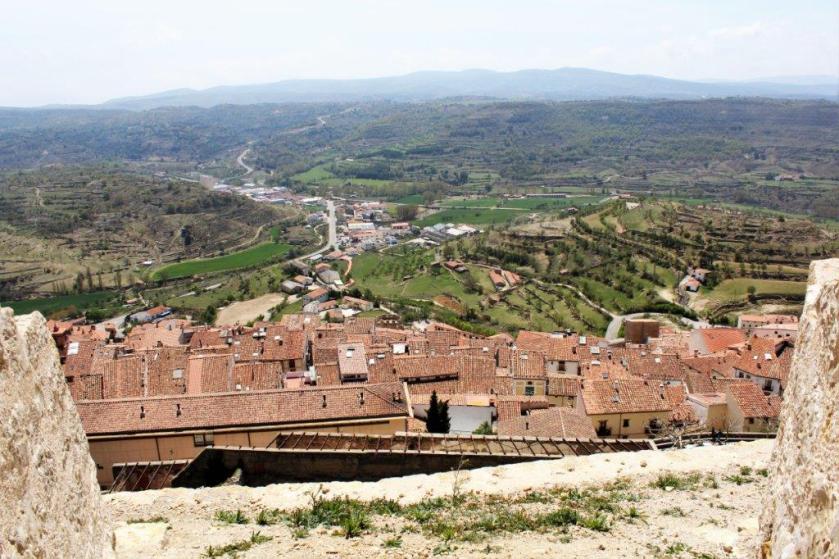 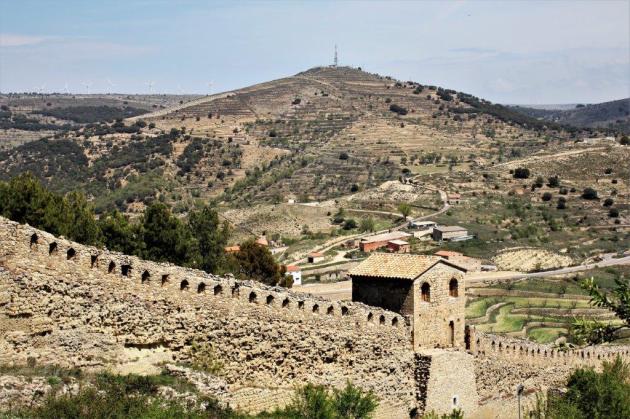 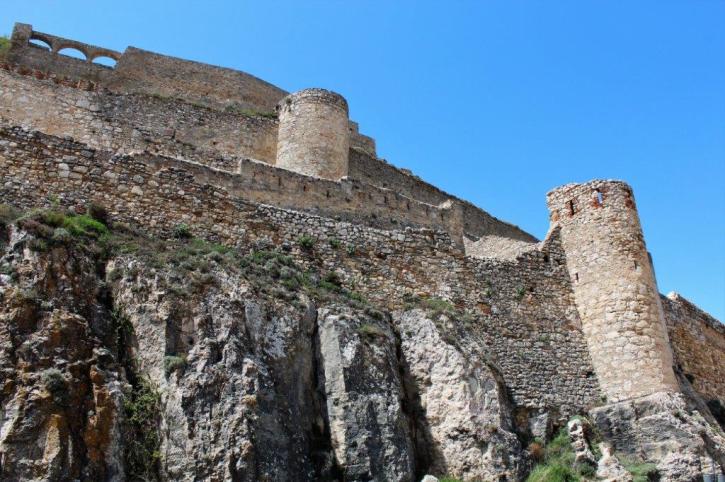 The photo above clearly shows the compressed town inside the immense walls. 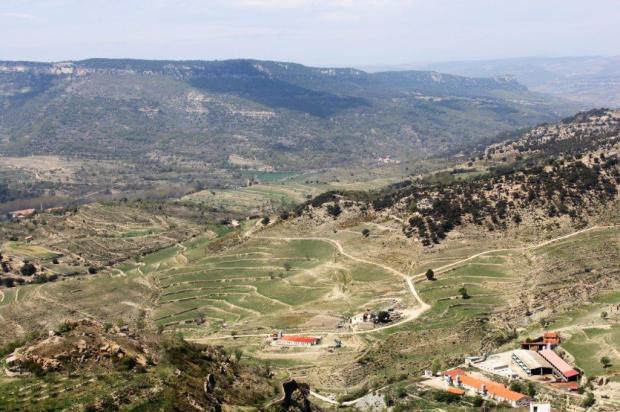 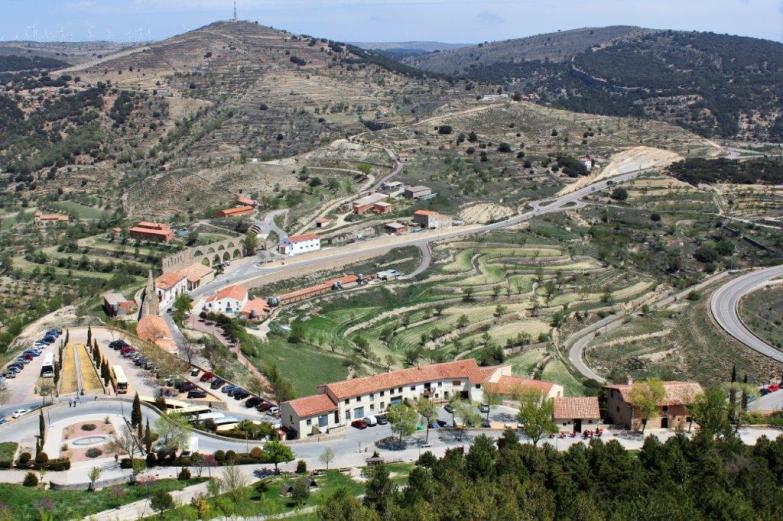 At 1:30 I wasn’t quite to the top of the castle but I figured it would take me a half hour, if I hurried, to get back to the main gate to meet the group at 2 so I reluctantly turned around and made my way down. 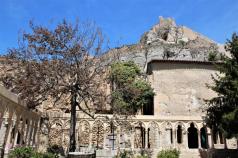 I made it to the main gate on time, but I waited over 45 minutes before John came hurrying to tell me they were all  just finishing lunch and would be along soon.  I had been getting concerned with the long wait, thinking I had misunderstood and was waiting in the wrong place, yet did not want to leave as I had said that is where I would be.  I was not very pleased to know I had rushed down from the castle only to learn I could easily have made it to the top in the time I had now wasted waiting at the main gate.  However, I was equally glad I had not spent all of my time in such an interesting place sitting in a restaurant rather than seeing some of the town.  All the rest of the people only saw the main gate, one street, a church and a restaurant.  I saw all of that plus several more streets and almost all of the castle.  Good day for me.

The tour group eventually arrived (another 15-20 minutes later) and we got back on the bus for the two hour drive back to Castellón.  Due to the long lunch we were behind schedule and our driver flew down that mountain and all the way back to the port to get us there by the 4:30 all aboard.

Morella is an impressive sight sitting on top of the mountain. 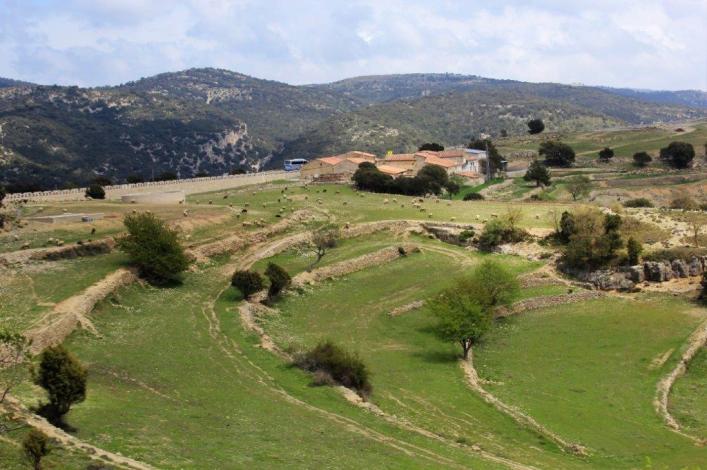 The ship was due to sail at 5 and local dancers put on a great show for us as the ship was readied to leave the harbour. 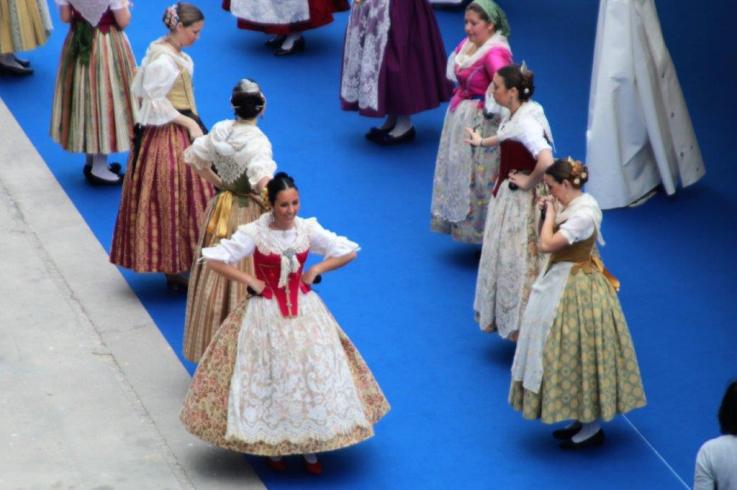 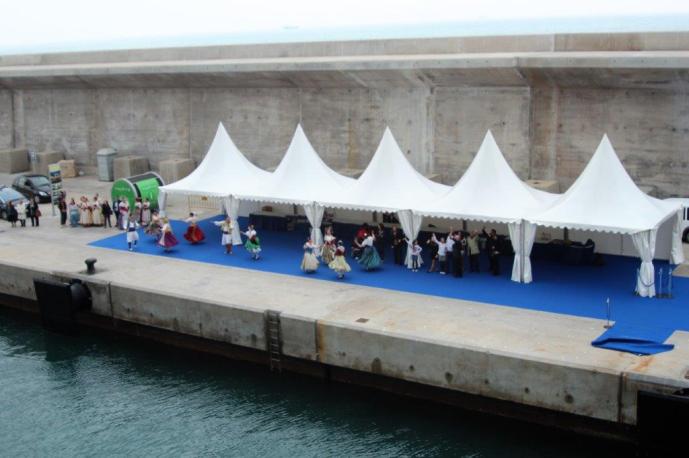 The next day we spent at sea before docking in Málaga, further west on the Spanish south coast.