In 1628 a massive eruption blew out the center of the active volcano known as Stongyle (ston GHEE lee).  The shock would have been felt over all of Europe.  A huge chunk of solid rock shot straight up in the air, landing in the sea with such violent force, it spawned a catastrophic tidal wave.  Many scientists believe the disaster wiped out the late Minoan civilization on Crete (113 km/70 miles) away. 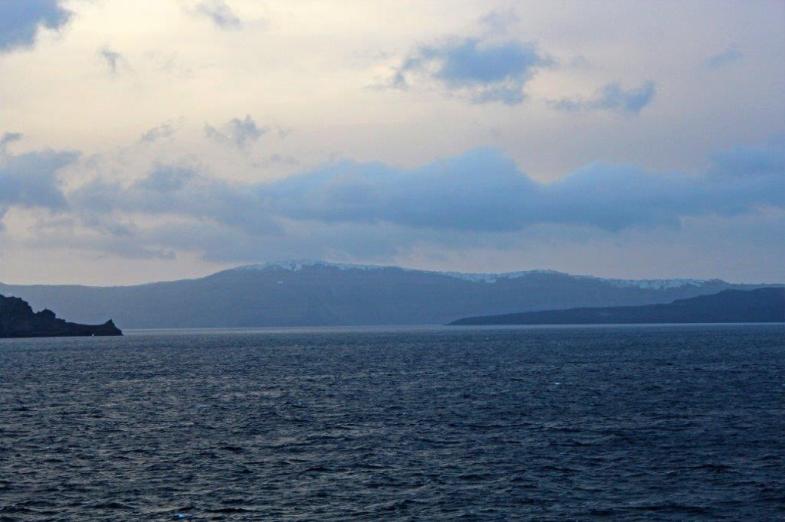 Although it appears to be three larger islands – and several small islets, each with its own name – Santorini is actually one land mass. All that is showing above the sea  is the tips of the volcanic rim surrounding the largest caldera in the world.  The Aegean Sea has just flowed in through lower areas and created what looks like separate islands.  Santorini lies about 233 km (126 nautical miles) to the southeast off the coast of mainland Greece

The ancient city of Akrotiri, located on the southwestern part of the island was completely buried under ash and excavations at the site began in 1867 after some local people found old artifacts at a quarry.  Like Pompeii, Akrotiri is very well preserved with paved streets, a sophisticated drainage system, and specialized craft shops.  There are lovely frescoes, furniture, pottery, and three story houses.  Remarkably, unlike Pompeii, Akrotiri has yielded no un-interred human remains, showing that the city was effectively evacuated.

Unfortunately no one was allowed at the site at the time we visited. The site had been closed in 2005 after a visitor was killed when a protecting cover collapsed.  (I think it is open for visits and tours now though.)

We did, however, have a glorious day! One of my very favourite of the entire trip.  Sailing into the caldera near Santorini was very strange.  The tops of the high, steep cliffs looked like they were covered in snow.  We knew that couldn’t be true but it took us awhile to realize the ‘snow’ was the whitewashed buildings of towns. 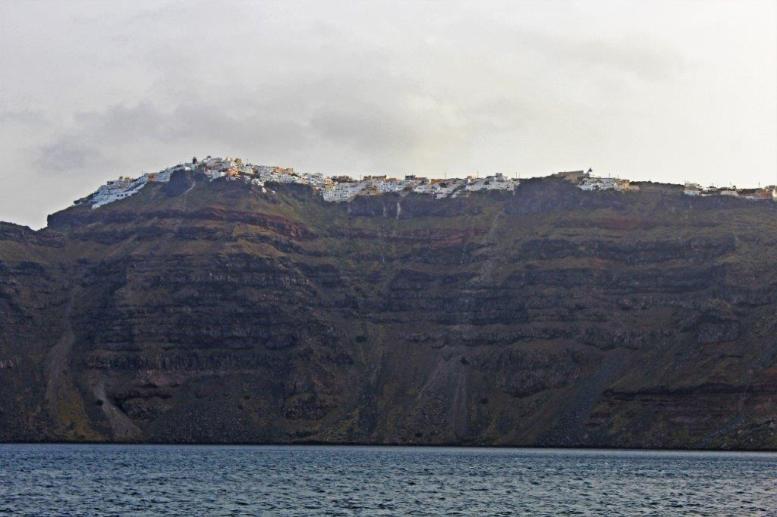 We anchored off Fira Skala (below the cliff-side town of Fira) and tenders operated between ship and shore all day. 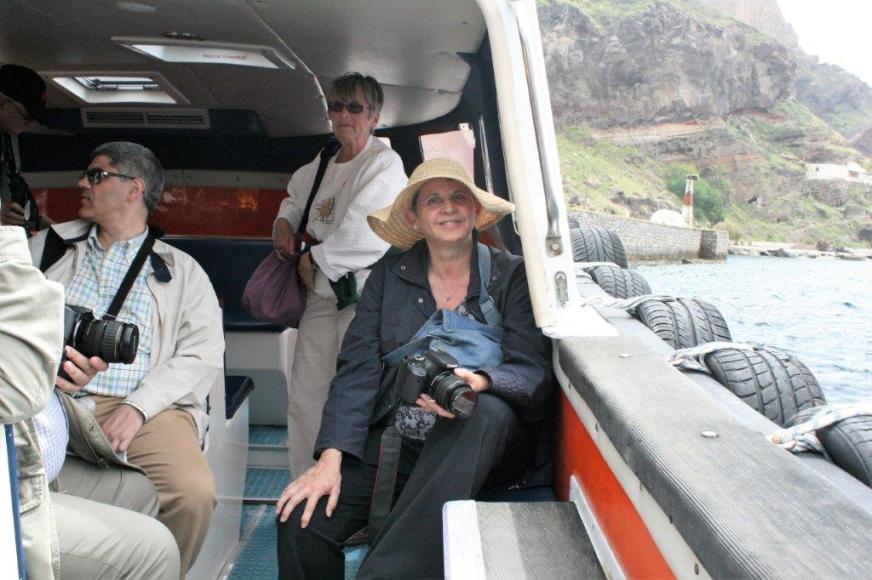 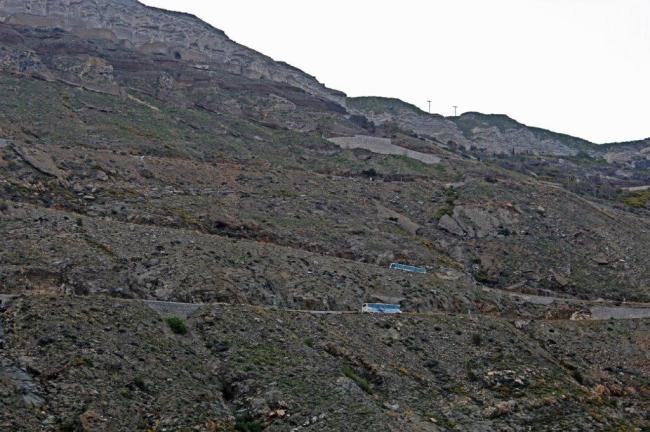 It is a narrow switchback road to the top.

There are 17 villages on the island and a total population of about 14,000.  We traveled first to northwestern tip, to the gorgeously picturesque town of Oia (EE yuh).  The buildings of Oia are prominently featured on almost every brochure and advertisement promoting Greece.  The village was destroyed in an earthquake in 1956 and has been rebuilt.  The flag of Greece is blue and white and during the German occupation in WWII it was forbidden to fly the flag so people whitewashed their home and painted the door blue to display their national allegiance.  Even today most people put a fresh coat of whitewash on their homes every year.

I could have wandered up and down the narrow, stair-filled walkways all day long!  We were blessed with a beautiful sunny day and everywhere I looked there were flowers, or pottery, or jars, or buildings of lovely colours and shapes, and sizes.  As an avid photographer it was magical. 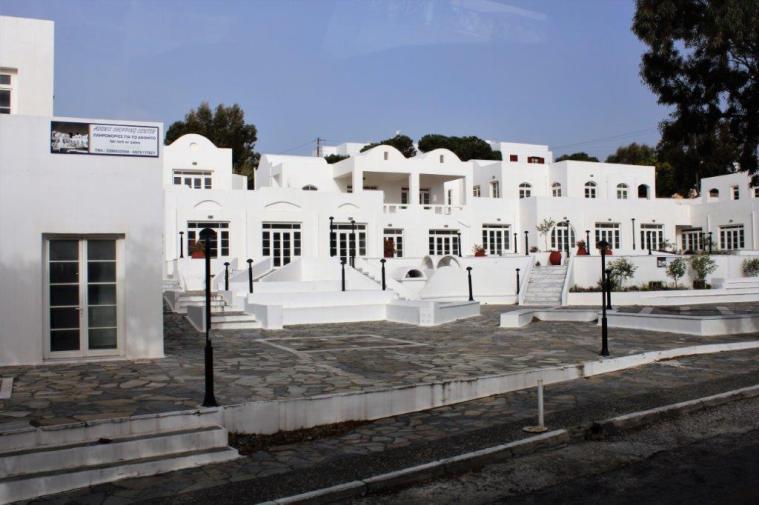 The bus driver let us off in the upper square and we were give time to wander wherever we wanted. 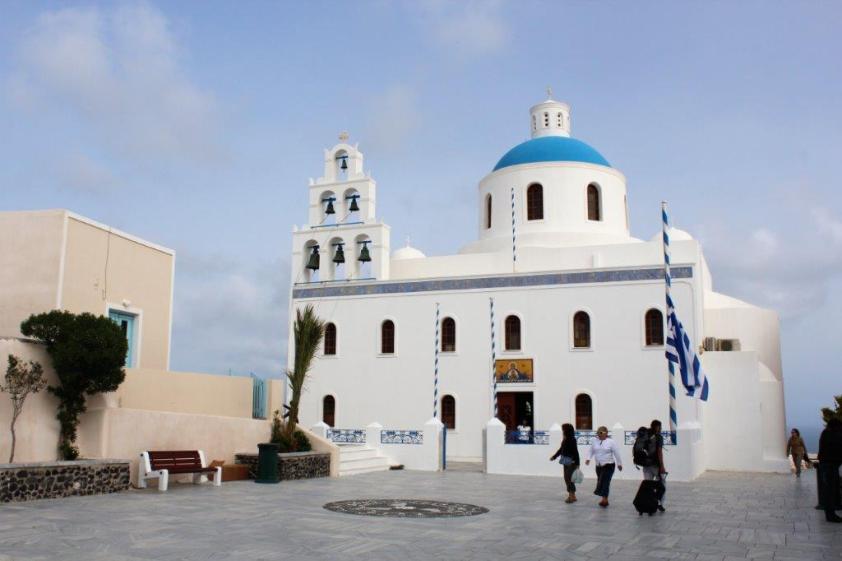 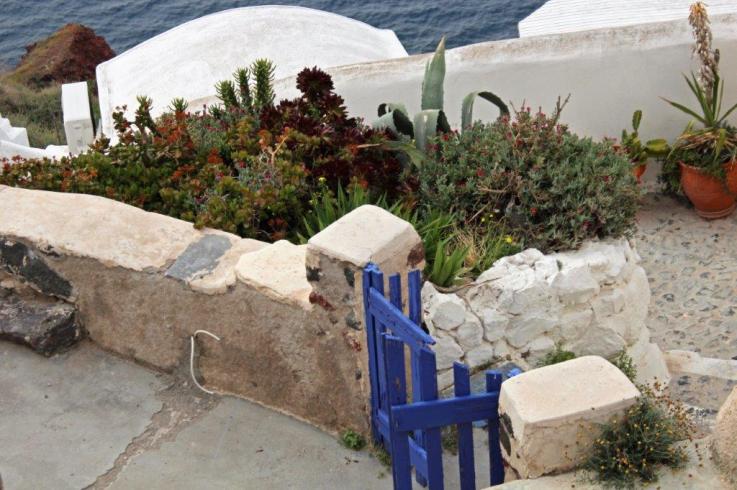 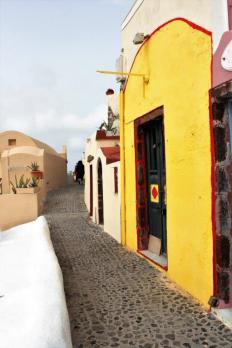 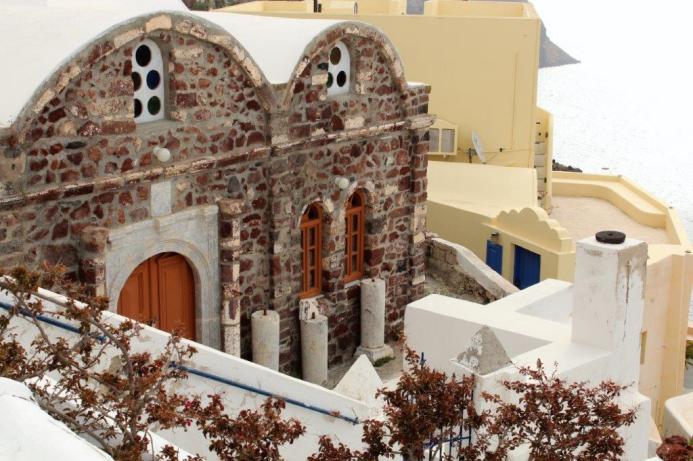 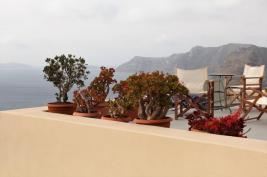 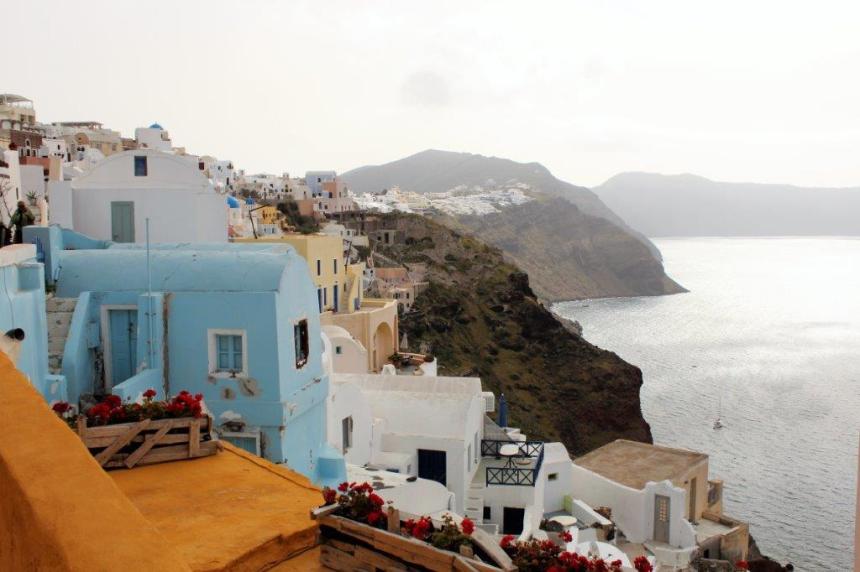 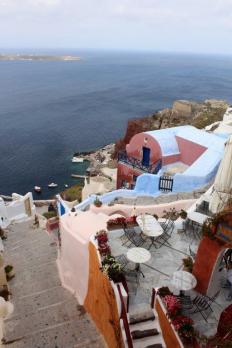 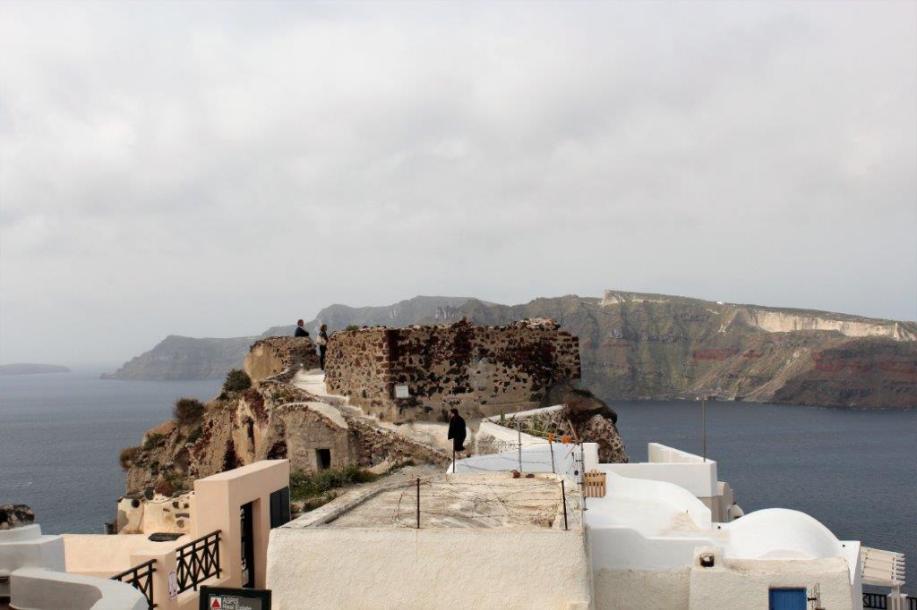 Our wanderings took us all the way to the old fort at the edge of the town.  It was a long way down to the sea, and it is 300 steps to reach the small harbour village of Ammoudi. 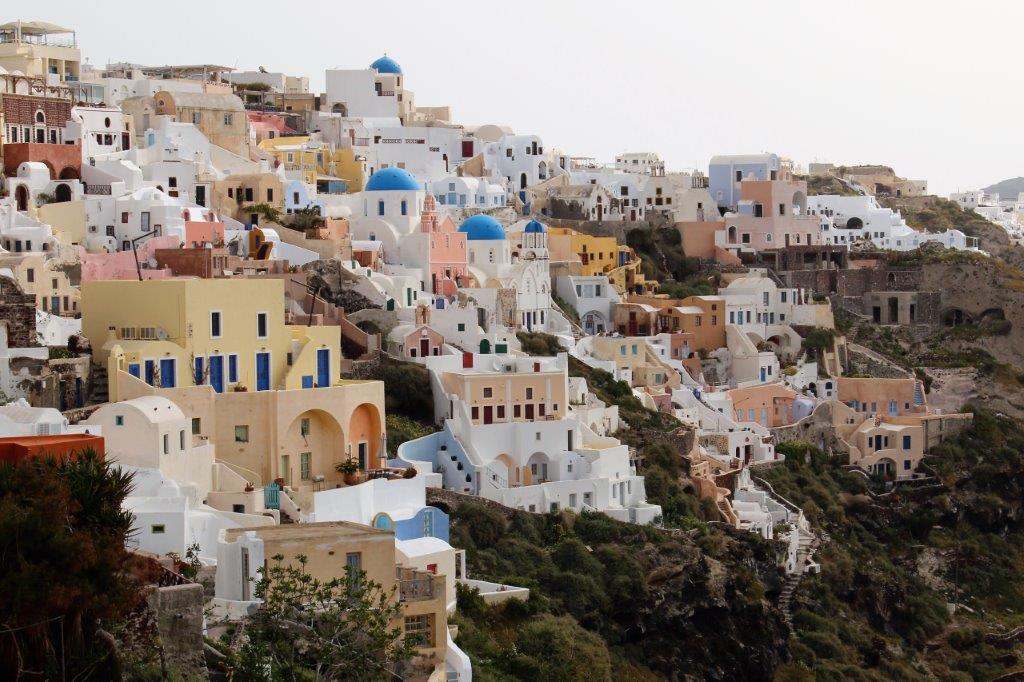 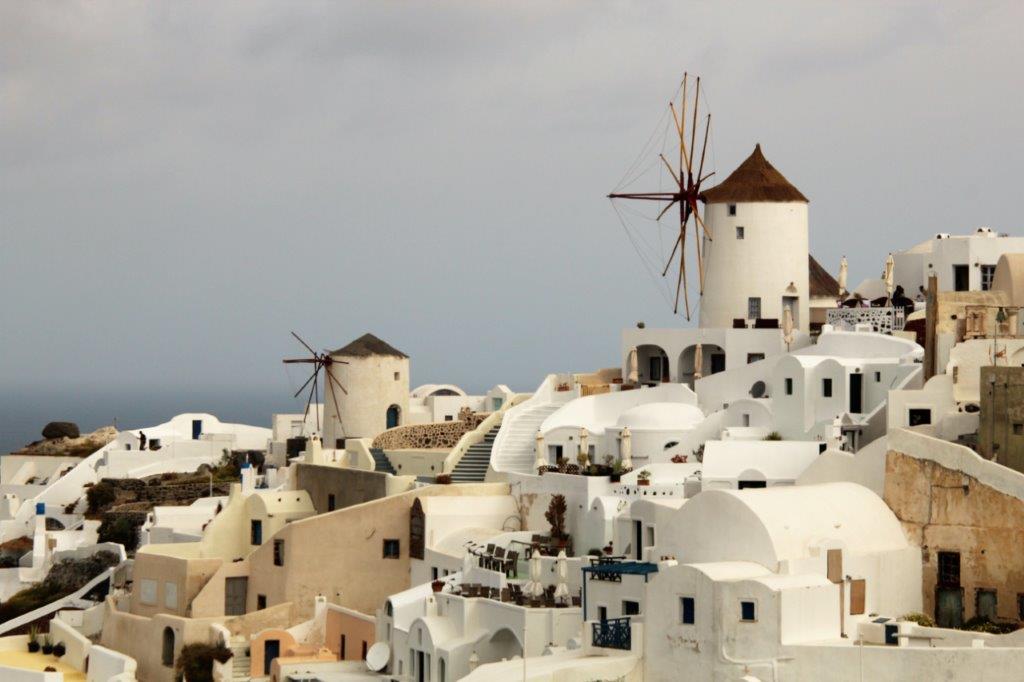 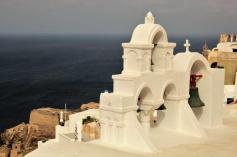 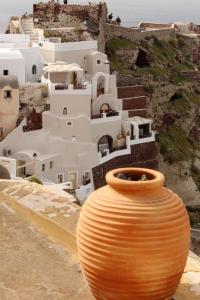 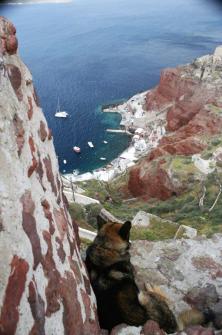 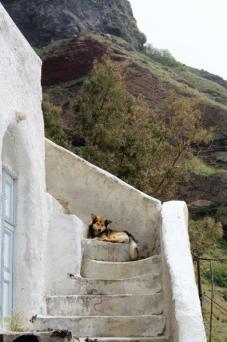 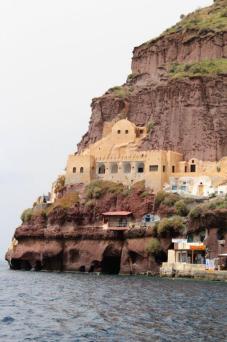 Seriously, how could you not love this place!  I did not want to leave Oia, but the tour must continue… 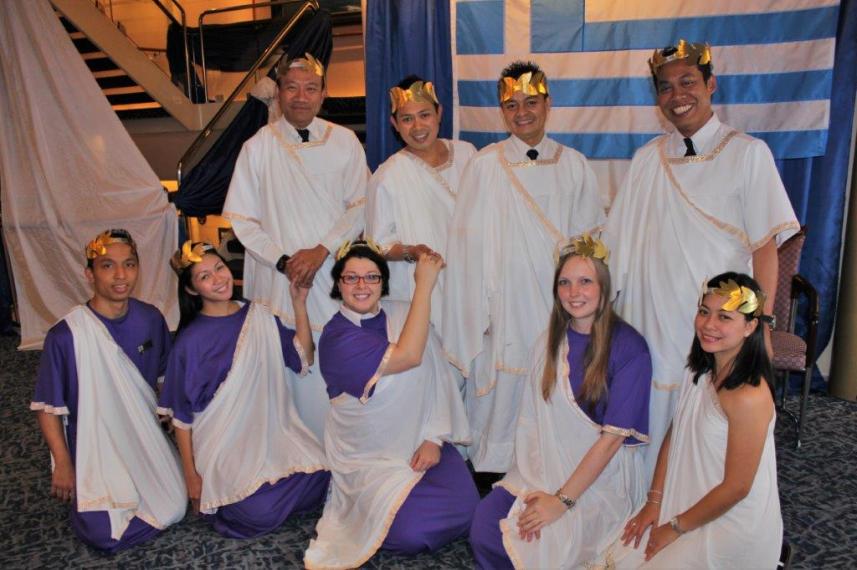