Constanta is the main Romanian seaport for traffic flowing in both directions along the Danube (Black Sea).  Bucharest, Romania’s capital is approximately 195 km (120 mi) from Constanta.  The express rail will get you to Bucharest in about 2 1/2 hours.  Constanta has the largest harbour on the Black Sea and is a major distribution center for wheat, and, of all things, scrap metal.  There are many run-down and derelict buildings from the communist era that are being torn down and the scrap metal is shipped to a new plant in Istanbul.

Romania is now a democratic republic with 41 counties.  They have been rebuilding the country since the rebellion in 1989 when the very autocratic communist ruler (who had kept the nation under his thumb for 25 years) and his wife, were executed on Christmas Day after a two-day trial. 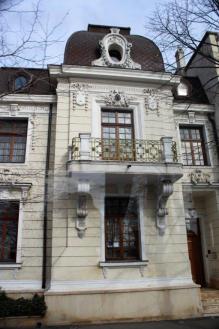 The electrical grid is somewhat haphazard. 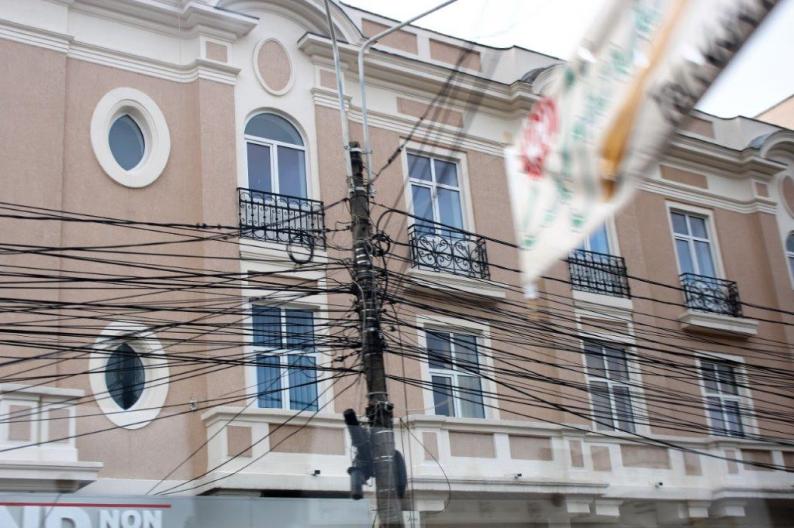 80% of the population of 21 million are devout Russian Orthodox Christians.  We arrived on Easter Sunday for us, but the Orthodox calendar is different so it was Palm Sunday for the people.  Much of the town was shut down for the holiday.  The tour we had chosen took us into the countryside through very fertile farmland.  This area accounts for about 30% of Romania’s economy.  The farms and homes were small and very basic but it had only been 23 years since the people had received the right to own property and work it for themself.

We made a brief stop at the Danube-Bosporus Canal.  This artificial river across a narrow part of Romania cuts 400 miles off the Danube River’s route to the sea.  The canal was envisioned in the early 19th century but was considered too expensive to attempt to build.  The communist leader of the country said he could get it done and had plans drawn up.  His construction team was to be comprised of prisoners, liberal thinkers, artists; anyone who spoke out against him or his regime, rulings, soldiers, etc.  Prison camps were erected all along the canal route and quickly filled with forced laborers. 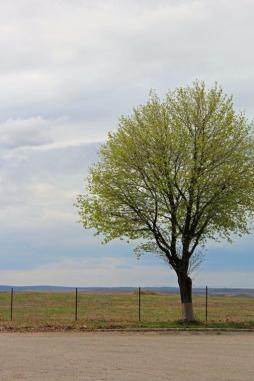 We visited the reconstructed Monument of Tropaeum Traiani.  The site was discovered about 1900 and became one of the most important antique Roman monuments in the nation.  Emperor Traiani ordered a Triumphal Monument (to honour victory in battle), a mausoleum for the incinerated remains of a formidable officer who died in the battle during which the Romans defeated Dacia (102 AD), and a cenotaph inscribed with the names of more than 3,000 soldiers.  Today, the facings on the monument are copies and the original base reliefs are in the nearby museum.  They have 49 of the original panels.  Three more are in the museum in Bucharest and the location of one is unknown. 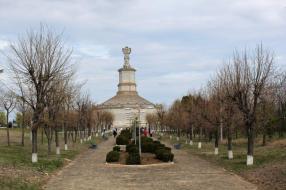 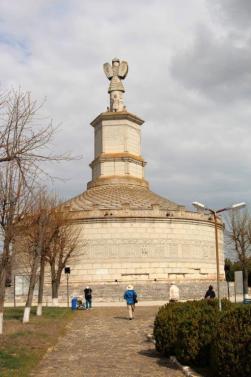 The scenes carved into the façade, known as metopes, commemorate and glorify the battle. 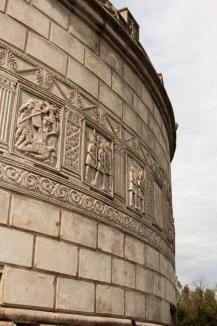 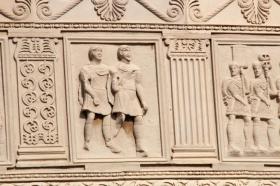 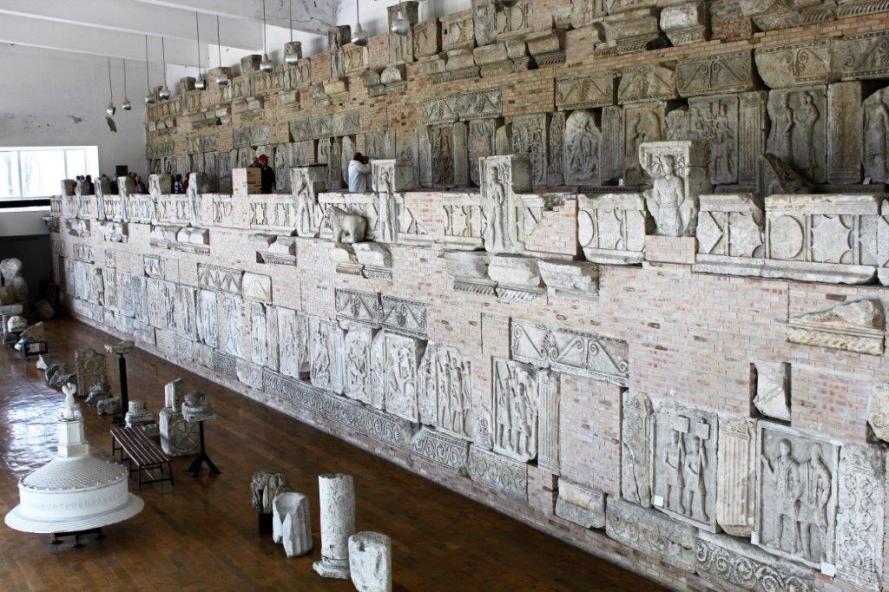 The original panels in the museum. 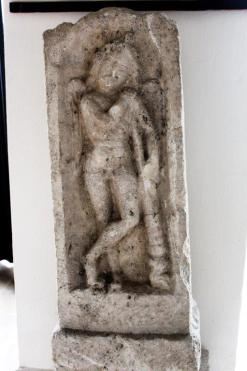 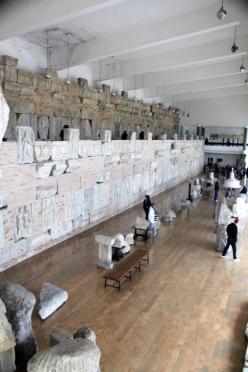 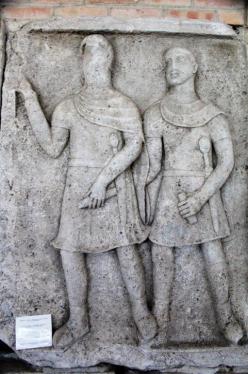 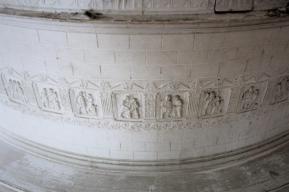 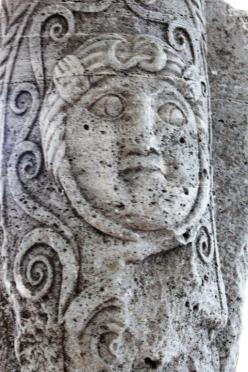 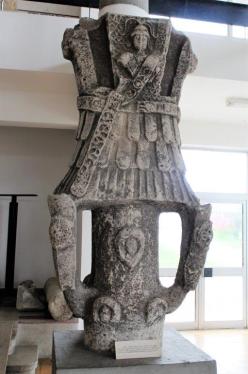 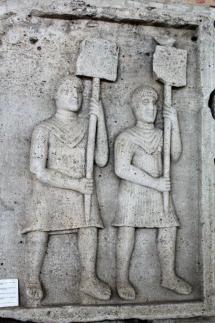 We drove a short distance to our final destination; St. Andrew’s Cave and Hermitage. 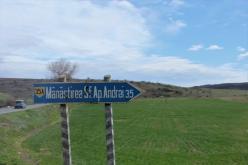 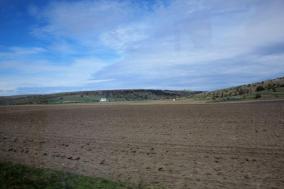 The apostle Andrew lived here while he preached the Gospel and baptized the first converts to Christianity in Romania.  There is an Orthodox monastery and a lovely church at the site as well.  The cave is still used as a place of worship.

Church services were concluding as we toured the cave and we were able to go into the church later.  It is traditional for families to bring a picnic and have lunch on Palm Sunday so there were lots of people wandering around the grounds. 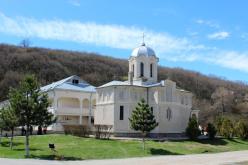 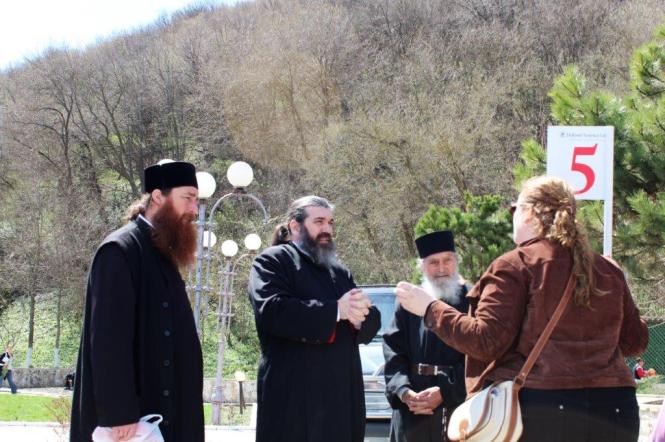 The cave was a small cut into the nearby hillside.  There was a shrine inside and very colourful murals on the walls.  A hole in the ceiling goes up to the chimney-like structure on the top of the hill. 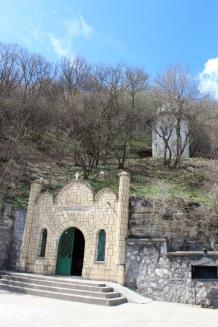 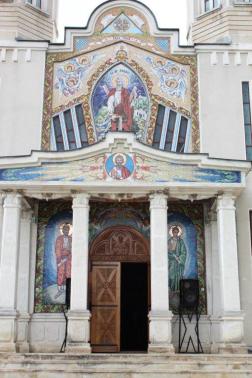 The Orthodox Church was very bright with paintings of all the apostles, many designs, and symbols. 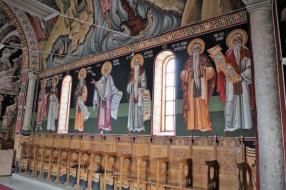 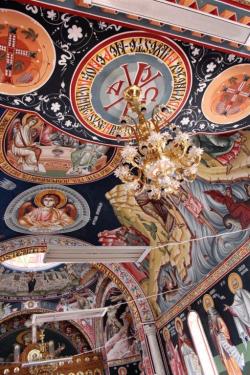 After our tour of the church was finished we were ushered to a long narrow room and given lunch made by the local ladies.  Since we were visiting during the Lenten season when they observe a very strict fasting tradition, we were served a very simple meal.  During Lent they eat no meat except on Annunciatian Sunday and Palm Sunday when they can have fish.  Our lunch therefore consisted of pickled herring, fish balls, cold fish fillets, cucumbers, tomatoes, olives and an apple strudel-type dessert.  Some folks on the tour were not really pleased with the lunch but we felt that were given the best they could offer and still follow their holy observances.

The drive back to the ship took almost an hour and a half. 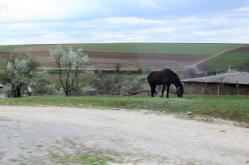 Lots of people grow grapes for their own wine in the front yard.

We got back to the ship in time to attend the Easter worship service.  As usual the florist on-board did an awesome job with Easter-themed arrangements around the ship. 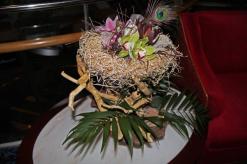 The Easter Bunny visited the dining room and all the cabins received chocolate bunnies.

The next morning we docked in Odessa, Ukraine where we visited the cryptic catacombs.