Ephesus was a bustling port city; a trading post and religious center 3,000 years ago.  During our tour of the ancient city, located a half hour drive from the port of Kusadasi, Turkey, we passed the Agora (public center of the city) and walked down Processional Way.  This brought us to Curetes Street, which was a major shopping district. 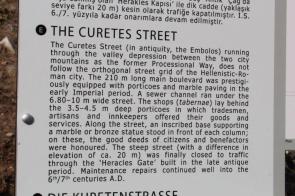 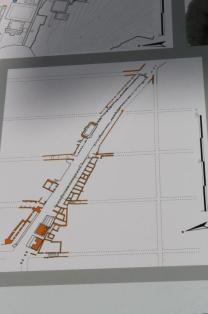 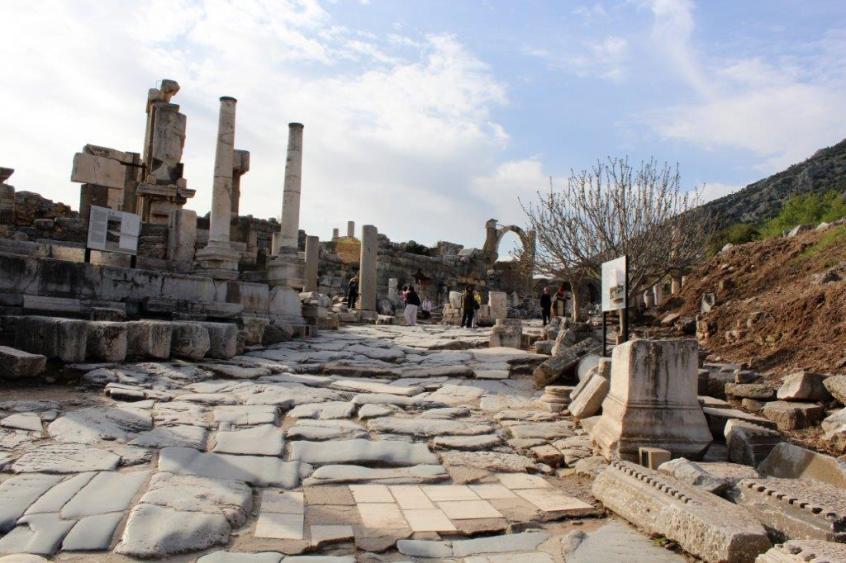 Here are to two maps again to help with locations – if you can enlarge them enough to read the fine print, that is. 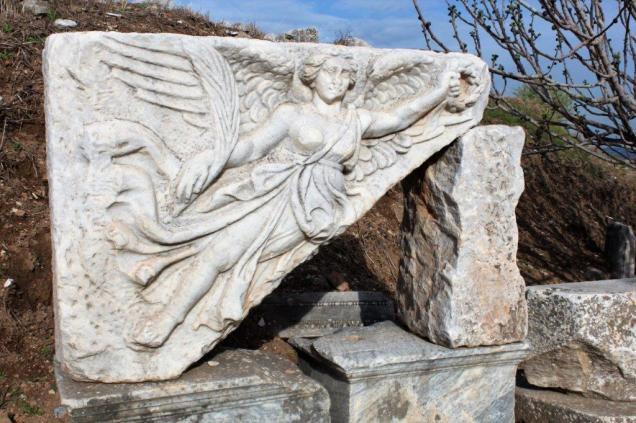 Nike, the Greek goddess of Victory 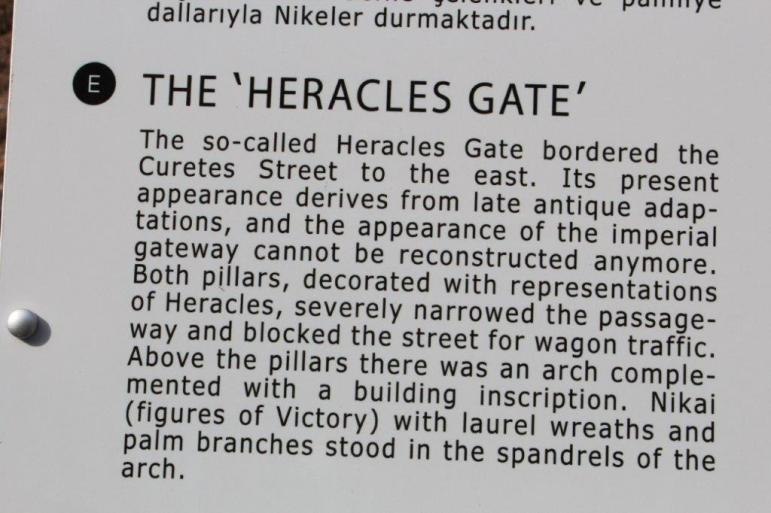 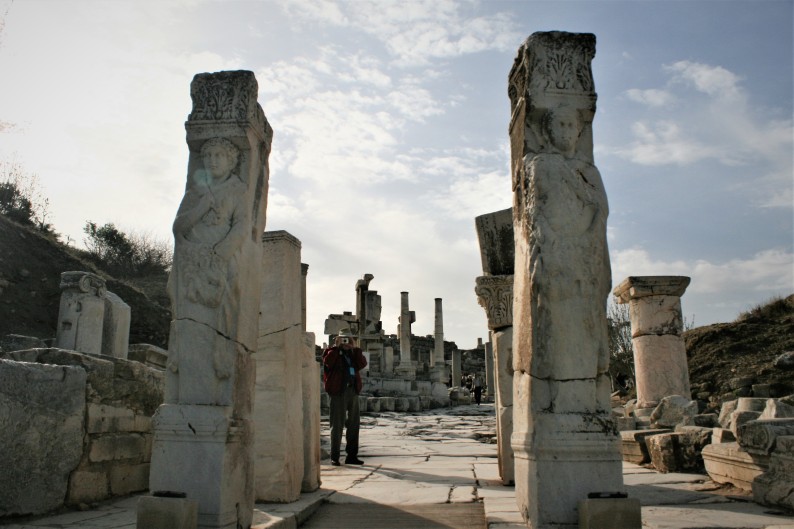 The Heracles (Hercules) Gate located at the end of Curetes Street blocked chariots and created a pedestrian walkway.  It was so named because of the relief of Hercules on it.  The gate was brought to this location in the 4th century AD but the carvings of Hercules dates from the 2nd century AD.  The relief of the flying Nike that is in Dominitian Square is believed to have been part of this gate. 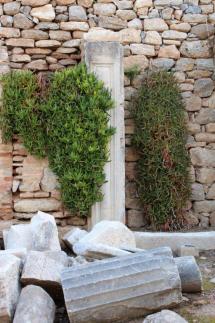 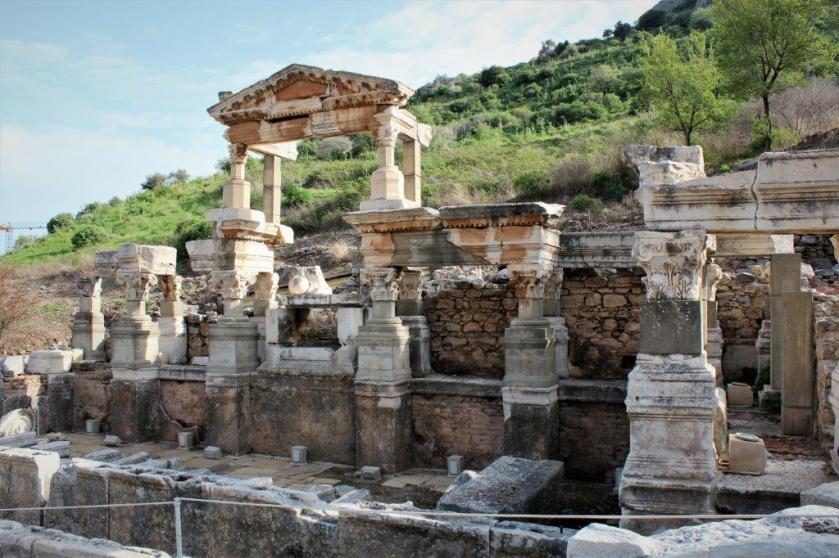 The Fountain of Trajan, one of the finest monuments in Ephesus.  It was built in 104 AD in honour of Emperor Trajan. The fountain pool was 20 X 10 meters and was surrounded by statues. 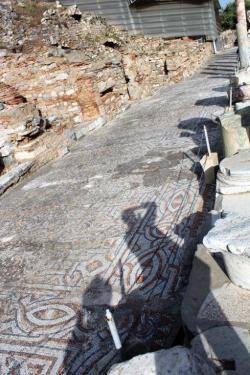 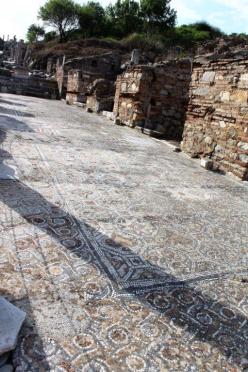 There were many houses on the slope of Curetes Street.  Under the houses were colonnaded galleries with mosaics on the floor in front of the shops.  There was a roof over these ‘sidewalks’ to protect the pedestrians from the sun or rain. 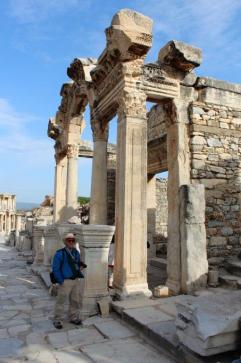 Emperor Hadrian came to visit Ephesus in 128 AD.  P. Quintilius built this, the best preserved and most beautiful structure in the city, in 138 AD and dedicated it to the emperor. 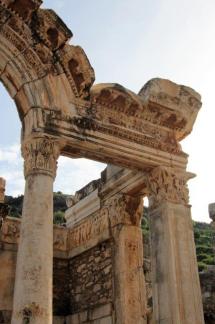 Not far down the street from the Temple of Hadrian is the Public Toilets which were part of the Scholastica Bath built in the first century AD.  They were the public toilets of the city and a fee was charged to use them. 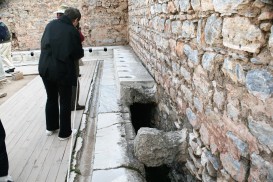 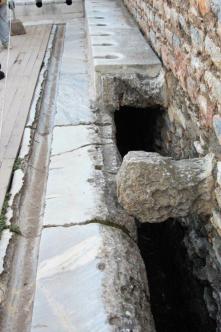 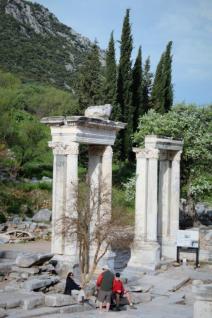 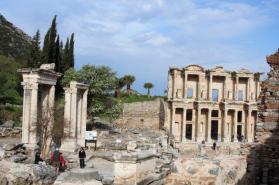 On the hill across from the Hadrian Temple are the Terrace Houses, also called the “the houses of rich.”  There are six houses on three terraces, which have been covered with roofing resembling Roman houses.  The oldest of the structures dates back to 1 BC and continued in use until 7 AD.  There is a separate ticket fee to visit the Terrace Houses, so many people who visit Ephesus do not see these remarkable treasures.  We did, and I will show you photos in my next blog.