Breakfast was served at 5 am which meant we crawled out of our tent at 4:30!  We were on the road at six after watching another sunrise. 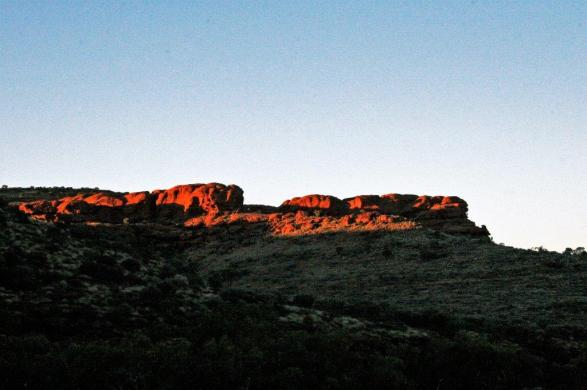 It took just over an hour to get to Watarrka National Park, home of Kings Canyon.  The rim trail is 7 km and takes 3 1/2 to 4 hours.  After the hike at Kata-Tjuta the day before my knee was really sore but I didn’t want to just do a one hour walk along the valley floor.  I wanted to see the views from the rim.  The English couple decided to walk the valley and the rest of the group headed up the 600+ uneven rock ‘steps to the 1000’ high castle rim.  The stairway is called ‘suicide hill’ because it is very common for someone to have a heart attack during the climb.  Good to know… 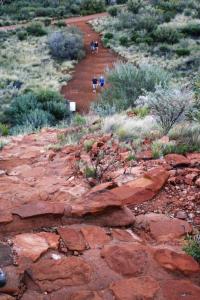 Gavin and I had agreed that I would follow the group as best I could and catch up at the photo stops.  If I got too far behind I just would have no stopping time and would have to keep going.  Groups hiking the canyon rim are spaced a certain amount of time apart so you must keep moving in order to not hold up the group behind you. 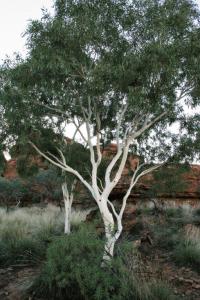 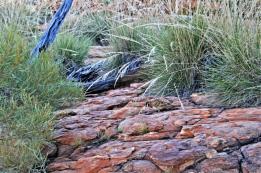 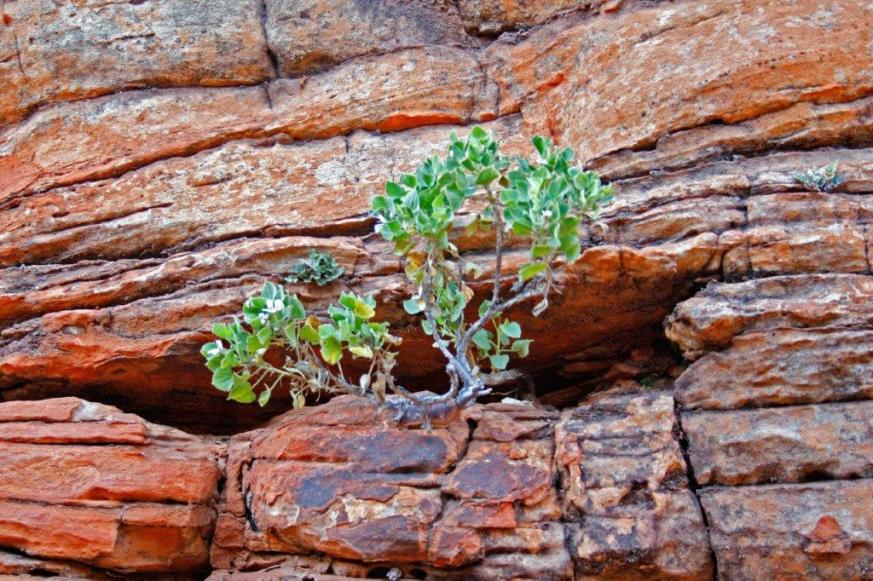 The ‘path’ was even less defined than at Kata-Tjuta.  There was only a few small blue triangles hammered in to the rock to indicate the way.   My knee was very painful all day with all the ups, and especially downs and by the time we took the back stairs down I was exhausted. 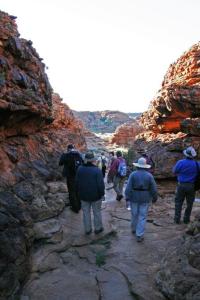 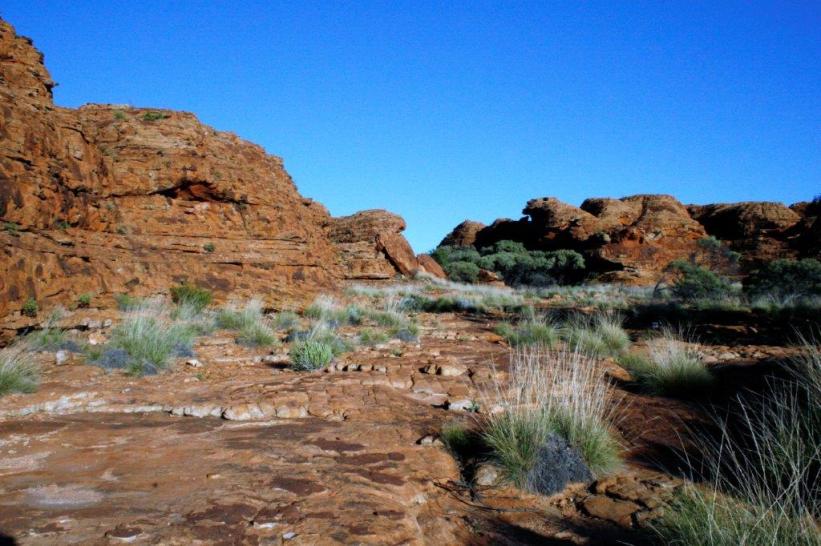 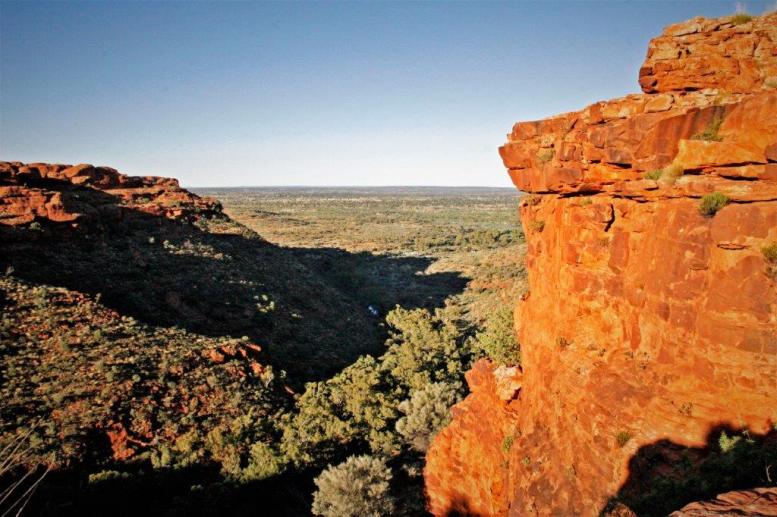 The long distant view was wonderful and the constantly changing rock shapes as we hiked along provided an endless photo op. 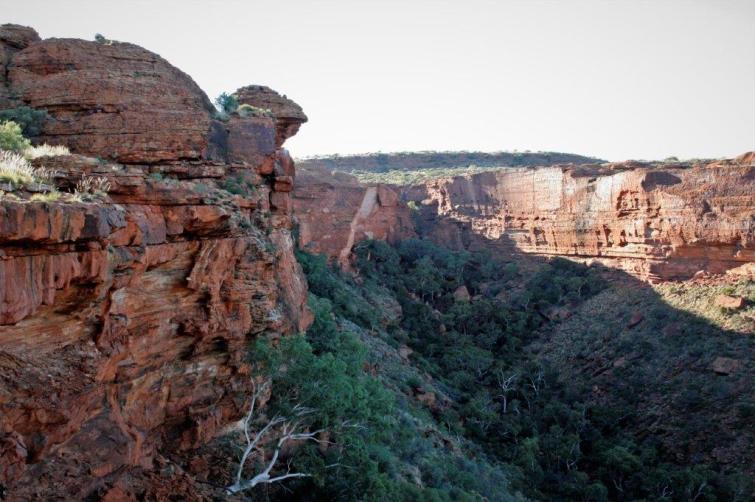 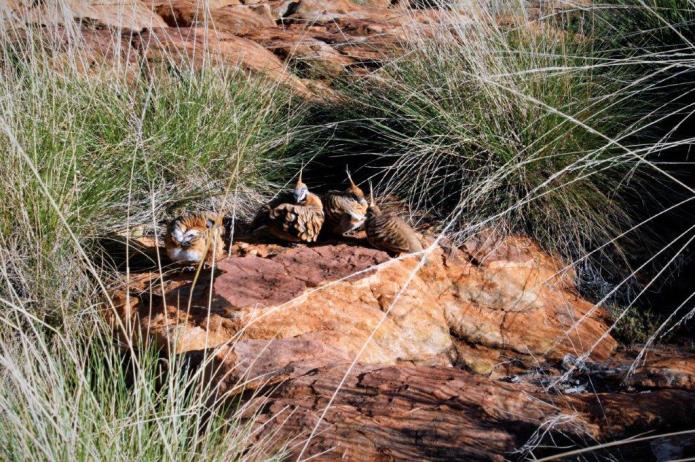 The rocks in one section of the rim trail looked like pans of dinner buns.  I only saw them in that one spot but the whole cliff top area was made up of the bumpy ‘buns.’ 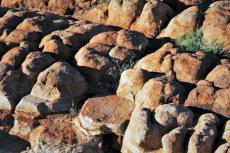 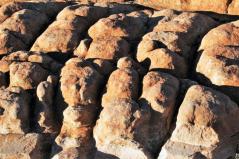 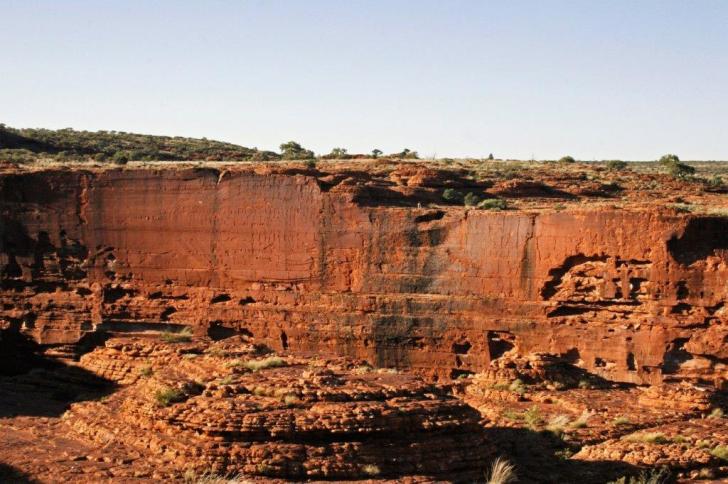 We hiked down the wall of the canyon, across the bottom and back up the other side via a boardwalk and many, many stairs. 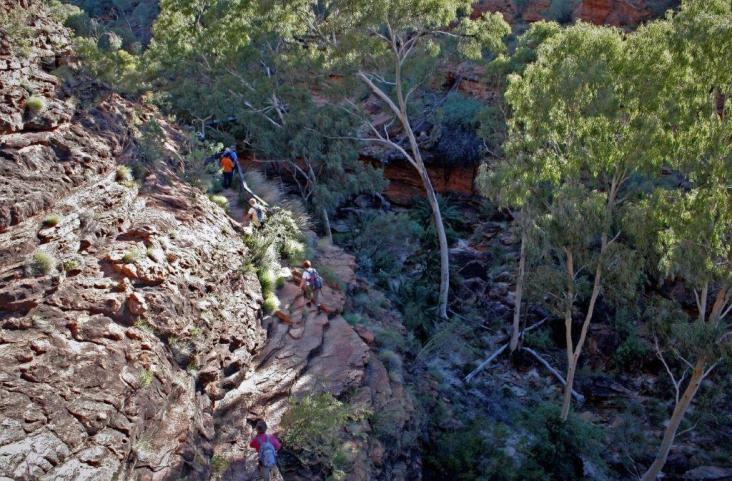 It is very hard to tell what is the front and what is the back of this little horned lizard.  If they get caught by a predator their tail will come off leaving them free to scamper away and then they will re-grow a new tail.

John’s relative’s told us the Australian word for stubborn, determined people.  They are called ‘stroppie.’  I was stoppie that day for sure.  But I am so very glad I struggled through and managed the entire hike.  I would have been very upset to not have gone.

It was almost 11 by the time we were back in the bus and Gavin drove to one of his favourite spots where we ate the bag lunches we had prepared that morning.

There are lots of brumbies (wild horses) and wild donkeys and mules wandering in the outback and we were fortunate enough to see some horses and mules.  We saw a wild camel as well, but I didn’t get a photo of it. 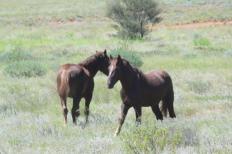 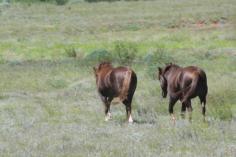 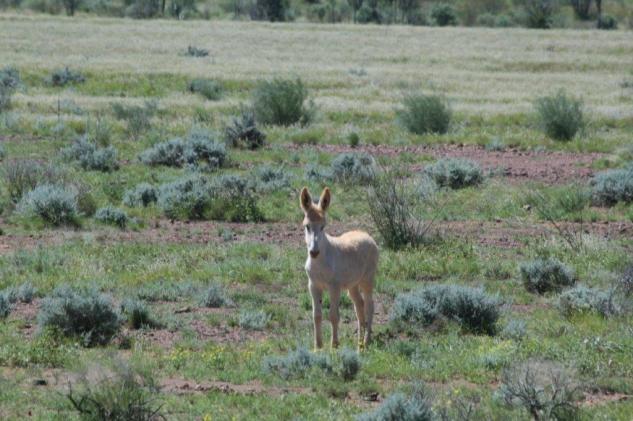 From Kings Canyon to Hermannsburg you drive the Mereenie Loop and we traveled 200 km on a deeply rutted gravel road.  Some of the bumps were so big we would bounce 6″ off our seats. We were driving along at a fair clip when a loaded jeep came up behind us and began honking.  The couple in the jeep were good friends of Gavin’s and were on their way to Darwin which is many miles away with nothing in between.  They had extra tires, spare parts, water, food, and gas; everything they may need in case of accident or a delay.  Gavin and Crusty (I would love to have heard the story behind that nickname) and his wife had a fifteen minute chat and then they pulled in front of our bus and off they went, soon to disappear. 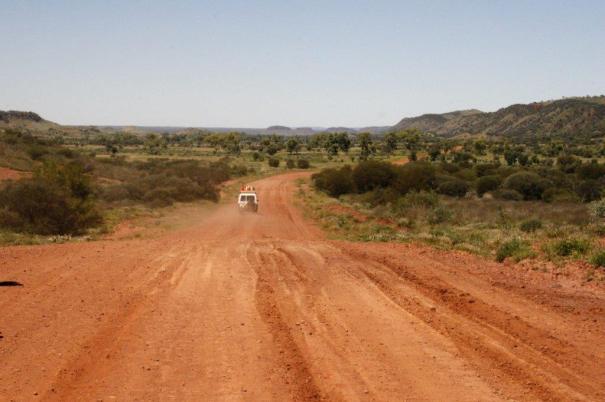 More evidence of the wet year Australia had in 2011 was the number of rivers we crossed where normally there would have been a dry riverbed.

Hermannsburg is one of the most famous aboriginal missions in Australia.  It was built by German Lutherans in the 1880’s.  They came to Australia to escape persecution for their Protestant beliefs.  When they arrived in the Outback they learned the language of the aboriginal tribe in the area and incorporated many of their Dreamtime stories into the bible stories.  The missionaries treated the people with dignity and respect and many came to faith and went to school at the mission.  To this day the Lutheran church is the largest Protestant denomination in Northern Territory. 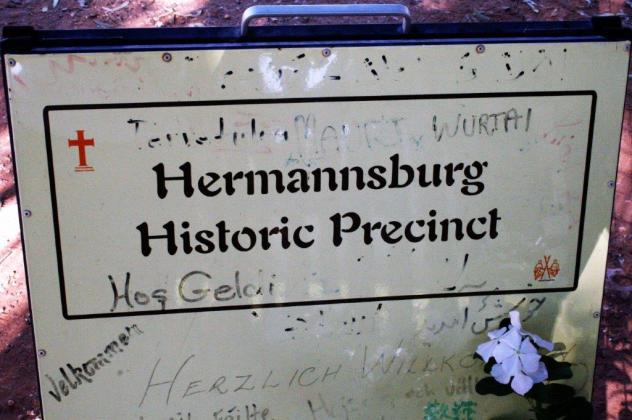 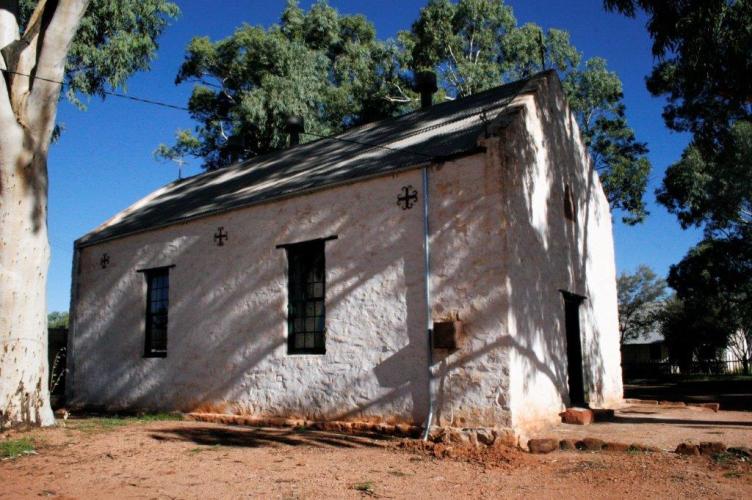 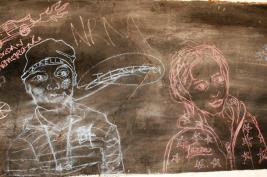 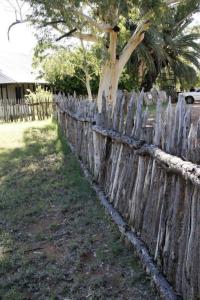 Some artistic person left this drawing on the blackboard in the school.

We were able to spend a bit of time wandering the mission complex and enjoyed some authentic German apple strudel before climbing back in the bus to complete our journey to Wallace Rockhole and our campsite for the night.

Subtlety is not the Australian norm.  It is very much a ‘tell it like it is’ country.  Even newspaper reports call a spade a spade and refer to mischeif makers or criminals in very blunt, even crude, terms.

Our final campsite.  The next day we headed back to Alice Springs.