Today was just a travel day.  We are on the final stretch home.  Could have made it today if we wanted to drive a few more hours, but we (especially me) are not in a big hurry to get back and why drive a lot longer than you need to if you don’t need to?  That’s our story anyway.

We left Wenatchee at 10:30 and arrived in Penticton around 5.  As we drove out of town the mountain in front of us was shrouded in cloud but the cloud had a wedge in it that made it look like the peak of the mountain.  Pretty nifty, I thought.

The reflections and the cloud stripes on the hillsides were lovely this morning.  We drove along the side of the Columbia River for miles today and I just snapped a photo every now and again as the scenery went by. 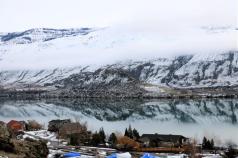 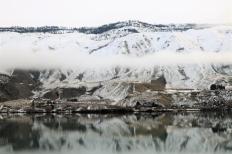 We picked up three geocaches and an Earthcache today.  (An Earthcache is a place of geological or geographical significance.  There is no log book in a container to sign.  Instead there is information about the feature or place you are at and to ‘log’ the find you must submit the answers to questions posted by the cache owner.  Often they want a photo of you and/or your GPS at the site. When the cache owner confirms your answers are correct you can log the find).  I like Earthcaches because the information is always so interesting.

The Earthcache we found was the Ribbon Cliff Landslide and the information was about how the landslide occurred.  There is some debate about whether it was a massive earthquake that happened in 1842 or the collapse of the volcanic ash and mud buildup at the base of the mountain due to undercutting by the Columbia River until it didn’t have enough support and brought the mountainside down. 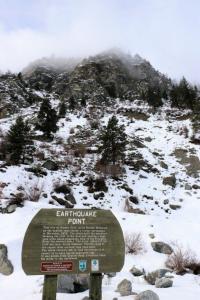 By the time we reached Chelan there was some lovely blue sky peeking here and there.  Lake Chelan is the third deepest lake in the US after Crater Lake in Oregon and Lake Tahoe in California, and ninth deepest in the world. 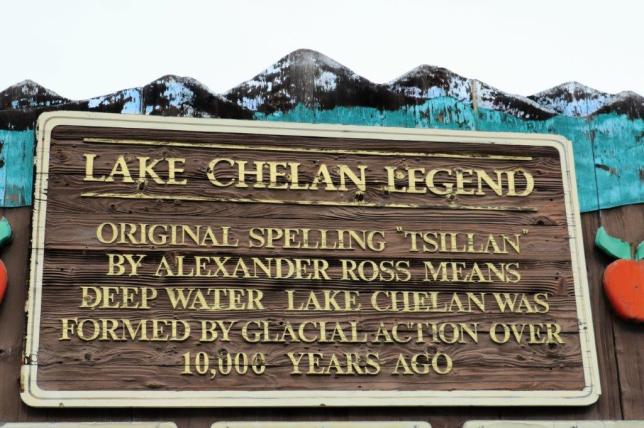 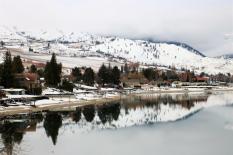 We pulled over in a lookout because there was a cache hidden there but my phone lost its signal so we couldn’t access the compass direction. I suspect the cache was hidden under all the snow tucked under one of the rocks. 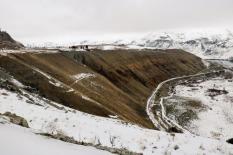 The most interesting part of our day was the US/Canada border crossing.  We have nine bottles of wine with us – 7 we bought at Hanna Winery in California and two were gifts from friends we visited, plus three bottles of beer that John had not yet consumed. We are only allowed to bring in two bottles each so we knew we would be going inside to pay duty.  All went as we expected.  We told the border control lady what we had on board, she directed us to park and go inside, the fellow inside confirmed our information and asked us to have a seat while we waited for some computer glitch to be resolved.  That is when things got interesting.

There was a 40ish-year old man standing by himself at the end of the waiting room when we sat down.  We had been there about 15 minutes when he walked over the counter and said, “How long is this going to take?  I have done nothing wrong and I just want to go home.  Why are the men not finished yet?  I want them to hurry up so I can just go home.”  Well, this is not a good strategy at border crossings.  He was getting quite argumentative with the two officers at the counter; who, I will say, did remarkably well at maintaining an even tone and demeanor.  As the fellow keeps on arguing with them a third office strolled over to the counter.  They are all armed and the man sees the gun and says, “What, are you going to pull your gun on me now?”  This guy is not smart!  The demands and responses went on for some minutes before another offficer walked in from the back with papers in his hand and told the angry fellow he needed to confirm some of his information and was having trouble getting it.  The man did not take this well and the arguing and demands continued.

After a few more minutes the border control office we had spoken to when we drove up beckoned us over to the counter and said, “I am making an executive decision and we are just going to let you go ahead.  You are not that far over your limits and our computers are still down so you folks just go on and have a nice day.”  Thanks very much belligerent fellow.  We realized it was not benevolence on behalf of Canada Customs, rather they did not want us sitting in the waiting room as possible collateral damage if things went further south with the angry man.  If that fellow thought he was being delayed unnecessarily before I bet he was regretting his outburst by the time he actually got to leave – if he did get to leave and didn’t get arrested instead.

We pulled into a lookout not far south of Penticton to take a couple of pictures of Skaha Lake before checking into the hotel. 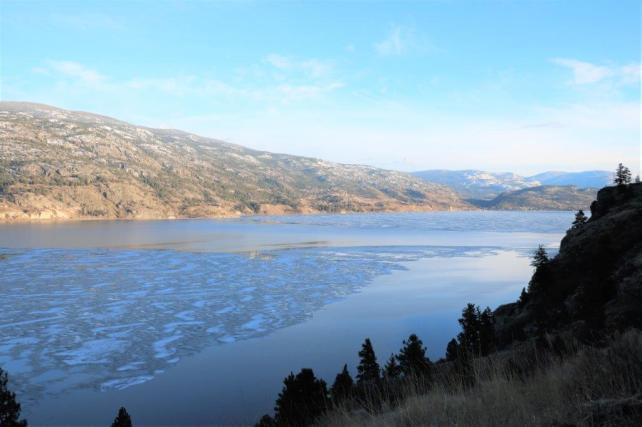 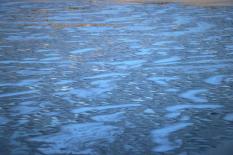 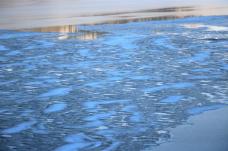 The melting ice on the lake made some interesting patterns.

Well, that’s a wrap folks.  Tomorrow we get home and another travel adventure concludes.  I always get depressed when we have to start the journey home.  I am never ready to get there even though I love my home.  But….we will be on the road again soon.  I hope.  Thanks for coming along.