There were two things we wanted to see in Ft. Bragg before leaving town this morning.  The first was the Sea Glass Museum which we had passed on our way to our hotel last night.  After breakfast we drove all the way back through town to the museum. (Why are US towns so long?  They seem always to stretch for ages along both sides of the road.  There are never any secondary business blocks.  Everybody’s business has to be on the one, long main street and the block behind is residential.  Only quite large towns and cities are more than one block deep.  This is a very strange custom in my mind.)

There were daffodils in bloom in a flower box at the Sea Glass Museum.

The fellow that built the museum and runs it is a retired military ship’s captain.  He makes beautiful jewelry from the sea glass and has an on-going battle with the city over the three sea glass beaches.

For many years Ft. Bragg tossed all of its trash down on the beach.  Unfortunately a freak tidal situation keeps everything on the beaches on the beaches.  The trash was swept out to sea on the tide, but was promptly brought back onto the shore with the waves.  Whatever is on their beaches stays on the beaches; nothing ever leaves.  It just gets ground down as the waves take it out and bring it back in.

They would burn the trash to get rid of it and eventually the city trash was no longer tossed onto the beach.  Volunteers and city staff cleaned all the remaining garbage off the three small beaches that had been used as dumps.  What remained though was ground-smooth pieces of glass.  Originally the sea glass was 7′ deep on the beaches.  Thousands of pieces – bucket loads – were picked up and used in table tops, ornaments, jewelry, garden paths and all manner of other things.

Ft. Bragg is famous for its sea glass and people literally come from all over the world to see it.  The city has been actively trying to have people not take the glass, saying it is archeological or rapidly disappearing.  They have fenced off access to two of the beaches and direct all tourists to the #3 beach that was used for the shortest period of time and has the least amount of glass on it.  This is illegal.  All beach foreshore in California is public land and the city cannot prevent people from picking up the glass or going on the beaches.  (There is no way to prove where any pieces of the glass came from, nor how old it is.  Archaeologists have confirmed it is not of historical archaeological importance.)  It takes 20-30 years to grind down a piece of glass sufficiently for it to be considered sea glass.

The captain has sued the city several times over this issue.  And another fight is on the way.  We had a most interesting talk with him.  He told us exactly how to legally access Beach #2 to see the glass sand.

It was quite a scramble down the bank where the old un-safe stairs had been before the city removed them last fall after a lady got injured.  It was amazing to see a small cove covered in sand that was made out of coloured glass.  There was more glass on the beach than rocks and pebbles.  With the constant tumbling in the water and rubbing against other pieces of glass all the ‘sand’ was smooth and rounded.  Very cool.  I was very glad we stopped at the museum first so we were directed to such a good spot. 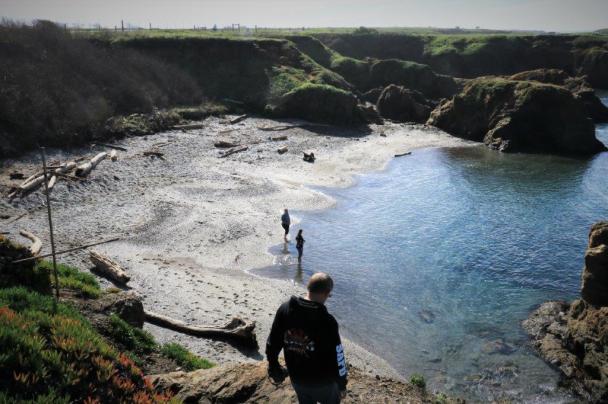 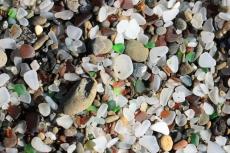 I dug a hole in the beach and the sand/glass mixture just went on and on. 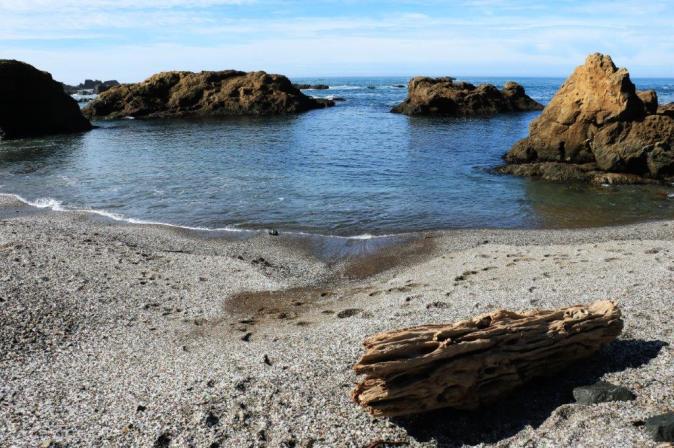 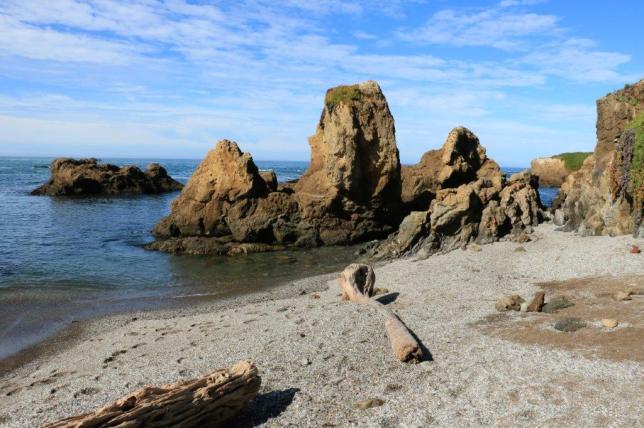 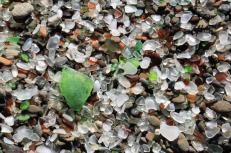 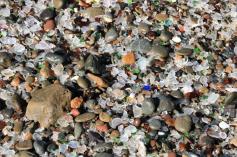 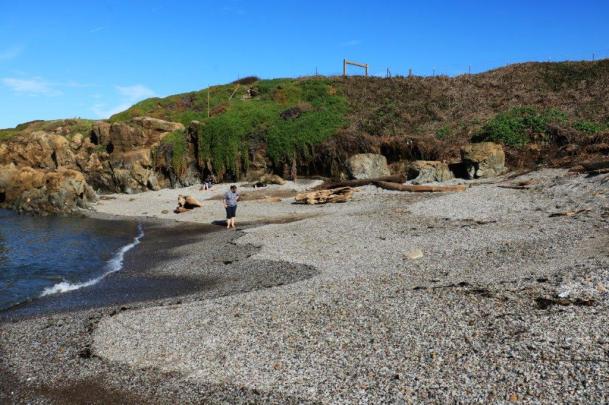 It was a stunningly beautiful sunny morning; most unusual for the area we were told.  There were flowers blooming on the cliff plants as well and a group of sea lions were enjoying the sun’s warmth on a large rock just off-shore. 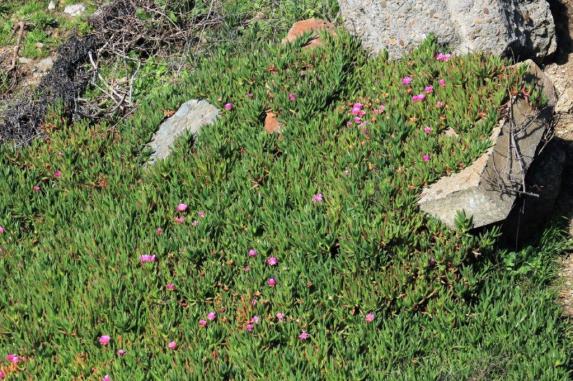 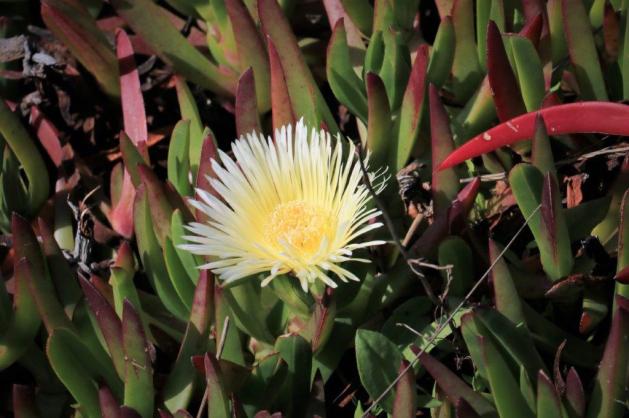 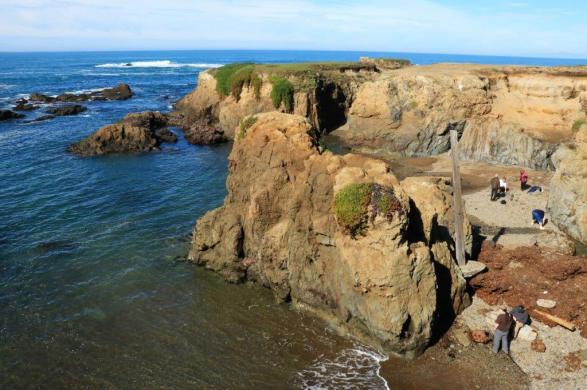 We were almost back to the boardwalk when we noticed this fellow feeding the ground squirrels so we diverted quietly around him so as not to disturb them.  It was lunch time after all. 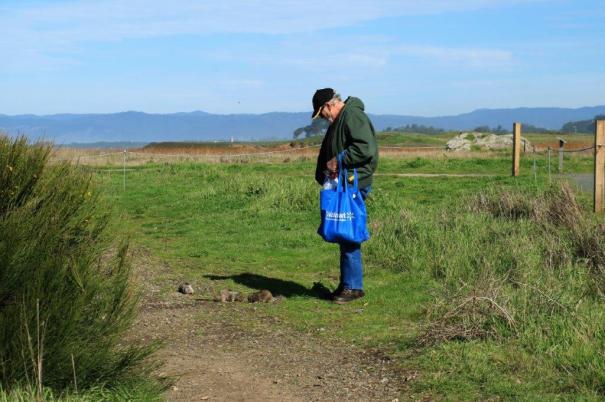 We intended to drive up the coast on Highway 1 until it connected with 101 and went inland until we reached Eureka.  However, as we were driving back up the road from the museum to go to the beach I noticed a road sign that said the road was closed 45 miles ahead.  That is almost where the two highways re-join.  We were directed to take Highway 20 east through the mountains again and then go north on 101.  This added about 35 miles to our journey but it was a narrow, very winding, climbing and descending mountain road (or as they are known in our house – a good motorcycle road) so John happy. 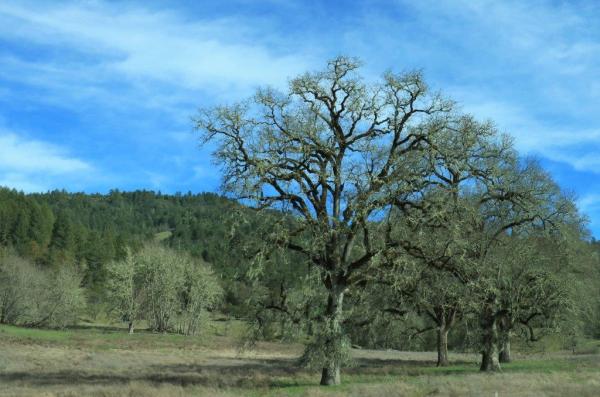 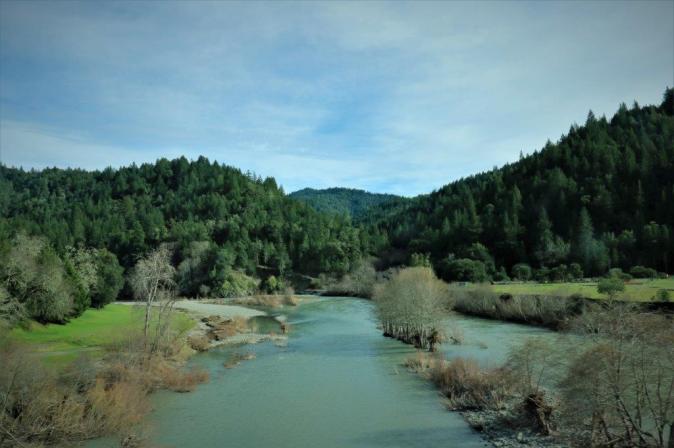 The northern California coast mountains are the home of the giant Redwoods and just over half way between Ft. Bragg and Eureka you pass through the Humboldt Redwoods State Park.  We exited the freeway and took the 32-mile scenic drive called Avenue of the Giants.  There were 8 stops on the auto-tour up the Avenue.  We skipped a couple that didn’t interest us and were nearing the end when another road sign informed us that road was closed ahead.  We had just gone through the small community of Redgate and there was an access to Highway 101 just before the town so, once again, we turned around and drove back to re-join the freeway. 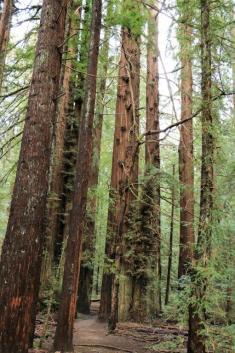 Northern California had some horrific rain and wind storms the first half of January and the ravages to the forest were obvious with all the brush, branches and downed trees.  We drove by several slide areas and had to divert into another lane through corridors of cone markers.

We had to navigate across this fallen giant to get by the puddles.

I lay down on my back on the ground and took this photo looking up at the tree tops. 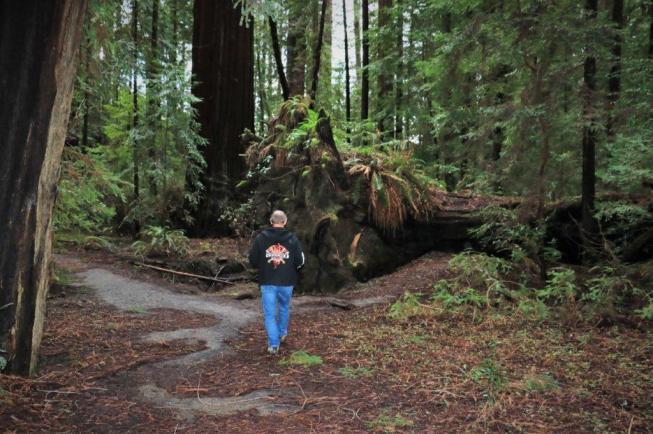 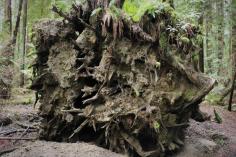 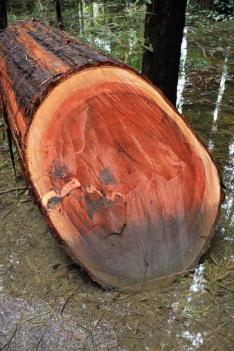 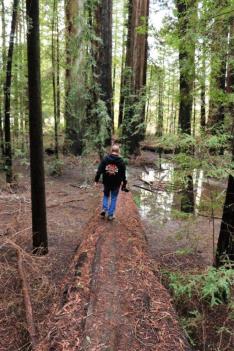 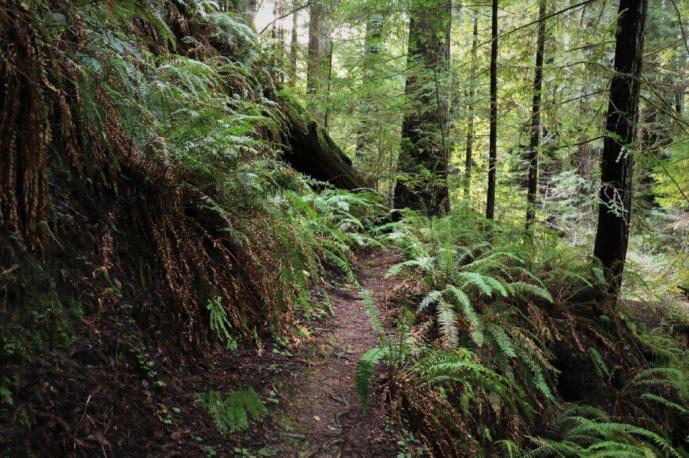 One of the last things on the Avenue of Giants was this roadside marker showing the high water mark of the December 1964 floods.  That crossbar is 35′ above the ground!  This entire forest would have been a lake with trees growing in it.  Amazing that there could be that much water here.

It was only about 40 miles to Eureka and we entered town at a convenient hour for dinner.