At the end of Monday’s blog I said tomorrow would be an awesome day and that we had PLANS.   Those plans were not the visit we made to the Leo Carrillo Ranch.  Tuesdays PLAN was changed due to 30 mph off-shore winds that cancelled our hot air balloon ride.  Thankfully the weather co-operated today and we soared into the sky!

Awesome, awesome day!  I have always wanted to take a balloon ride so I guess if I actually had a bucket list I would be able to cross that item off.

There were ten guests on the flight plus one crew and the pilot.  The basket will actually hold 14 guests but that would be a bit crowded.  With only ten we were two people to a section so we all had room to turn around and gawk in all directions.

A big fan blows air into the balloon once it is stretched out on the tarps.

If you need to straighten cables and such just walk right in.

When it is all ready the gas from the tanks in the basket are turned on and the hot air fills the balloon which causes it to rise. 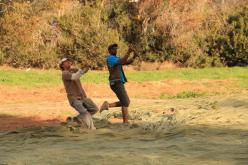 And then the crew works like the dickens to make sure it doesn’t rise into the air until all the passengers get in the basket.

As our balloon was being filled another basket and guests arrived and began to prepare for their flight.  They followed several hundred yards behind and cruised to a landing just past our basket.

There is no door to enter the basket.  There are some holes in the sides where you place your feet to climb over the side and in.

We reached a maximum height of 3600′ on our ride and had great views.  The route took us over the swanky Del Mar area of the San Diego coast.  The largest house in the area is 56,000 sq. feet.  Many of those we flew over had to be 40,000 or so.  There were swimming pools and tennis courts galore, riding stables and jumping courses, putting greens and massive landscaped yards.  What a person needs all that square footage for I can’t fathom.  Unless they are entertaining they probably live in about 4 of the rooms. 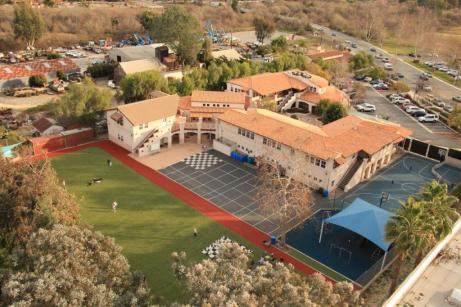 The first building we flew over was this school.  All the kids yelled hello and waved. 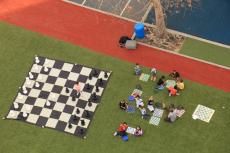 We startled a small herd of deer. 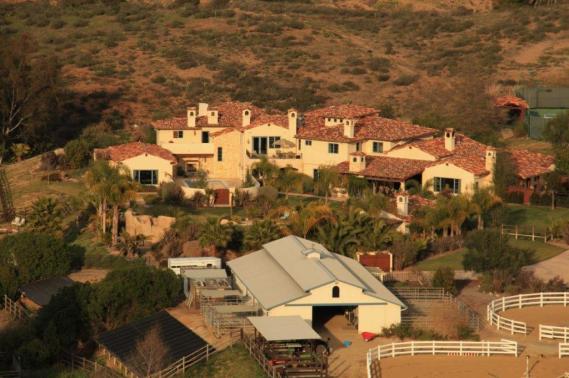 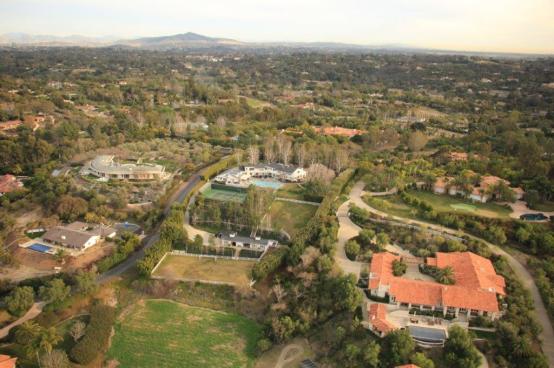 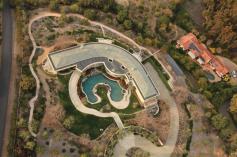 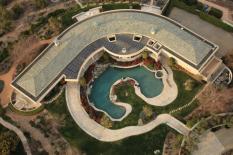 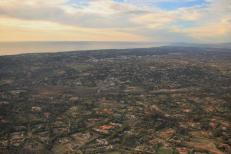 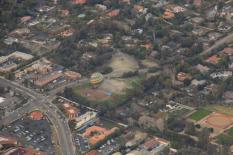 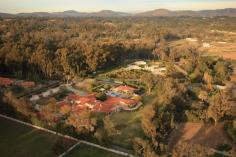 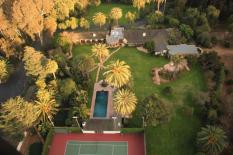 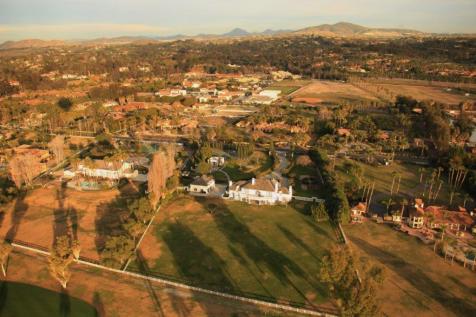 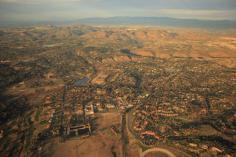 This race track, stables and all the cleared land belongs to Bill Gates. 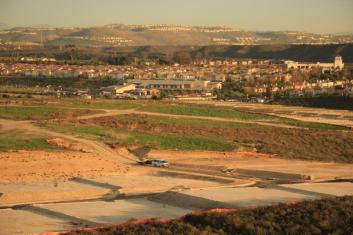 We are coming in for a landing and here comes our chase vehicle and crew.

While the crew member that rode with us and the two from the chase vehicle gathered up the balloon and the tarps and put it all into big bags Jeff, our pilot, told us a brief history of ballooning. 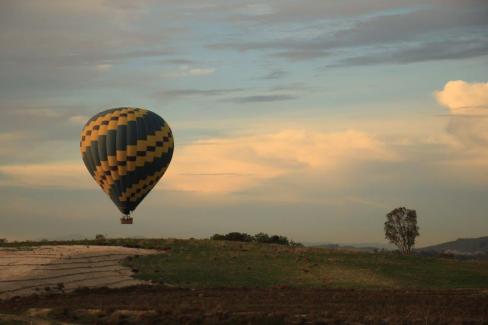 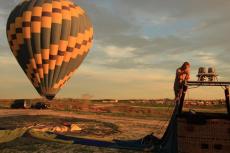 Two brothers in France in the early 1780’s noticed how smoke rose into the air and drifted away.  They decided to build a balloon that utilized this hot air and become the first people to fly.  After much experimenting with small ones they made a balloon large enough to hold people.  Not sure what would happen to the human body once it became airborne they sent a rooster, a duck and a sheep aloft.

As the smoke-belching big balloon carrying unseen bleating, crowing and quacking critters flew across the countryside and descended to the ground the local peasants, thinking it was some type of new warfare or a satanic apparition, attacked it.

News of this successful venture soon made its way to the court of  King Louis XVI  and a demonstration flight was arranged.  It was witnessed by the King, Marie Antoinette and 130,000 spectators. The balloon with the animals inside flew two miles and landed safely.

It was suggested that prisoners from the Bastille would be good human guinea pigs since if they came to harm or were killed it was no loss. The king would not let Joseph-Michel and Jacques-Etienne Montgolfier (the inventors) ride so their knowledge would not be lost in the event of an accident.  On November 21, 1783 a chemisty/physics teacher and a military court officer petitioned the king to be allowed to go.  The teacher made the first flight alone and stayed aloft 4 minutes.  When the two men went they travelelled 5 1/2 miles and flew for 25 minutes.

The legend is that the king, when he heard about all the ruckus created by local people attacking the balloons that held the animals gave the Montgolfier brothers bottles of champagne to be carried by balloonists.  When they landed they would be able to prove they were French and friendly by offering some good French champagne to any of the people that came to see the balloon land. The tradition is carried on to this day and we were given champagne at the end of our flight as the fellows packed up.  The champagne is accompanied by the following toast:

“The winds have welcomed you with softness, the sun has blessed you with its warm hands.  You have flown so high and so well that God has joined you in your laughter and set you gently back into the loving arms of mother earth.”

The sun set as we drank our champagne.  How perfect a day was that!? 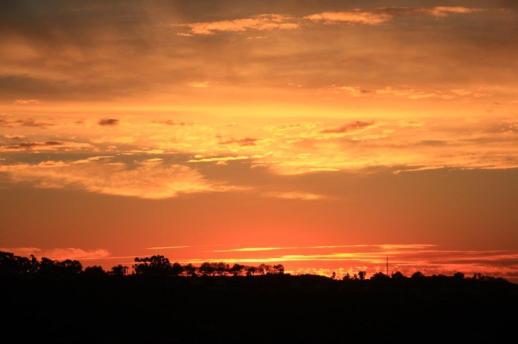 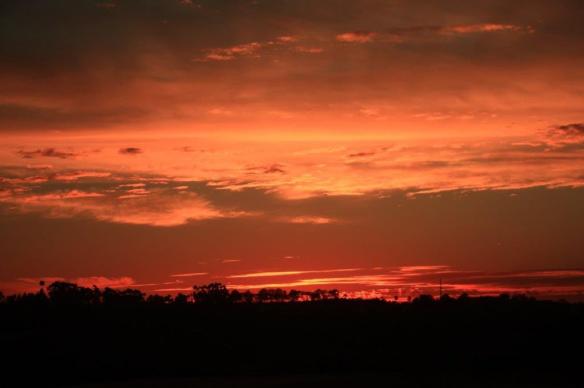 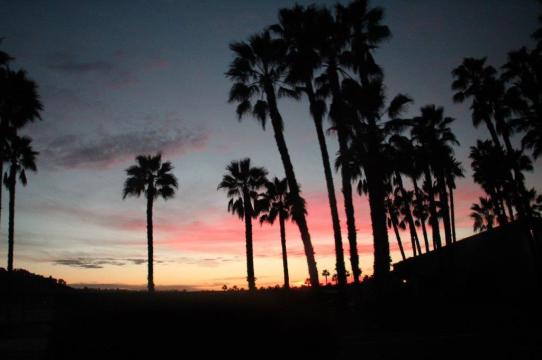