At 7 am the ship anchored off the coast of Nanortalik (Nan-or-ta-lick), Greenland, a small sealing and fishing community about 78 km west of Qaqortoq, as the crow flies.  Nanortalik is often described as a colder version of the California Pacific coast region because of the small variance in annual temperatures.  Summer highs hit 6C (44 F) and winter lows are about -3C (24 F).  The original community, called Nennortalik, was settled by Danish fishermen in 1770.  It was located behind the hills at the back of the current village which was founded in 1797. The name means, “Place of the polar bears,” or “Where the polar bears go.”  The people are a mix of Inuit and Danish.  Mountain climbers come here from all over the world to climb nearby Ketil Mountain and Ulamertorsuaq (pronunciation of this one is beyond me).  In 2004 gold was discovered 30 km north of the village and a mine has been started.  This will drastically change the economic structure of Greenland in the future.

The weather was cool and cloudy with a drizzling rain.  The sea was very calm so our tender ride was short and smooth.  Nanortalik did a good job promoting the community.  Right at the pier was a map of the town showing all the important buildings – church, cultural center, museum, tourism office, grocery stores, etc.  They also had several cultural events scheduled for the visitors: a talk on the community and lifestyle, a dance show and a local choir concert. 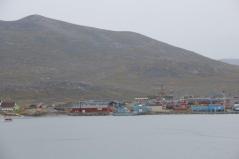 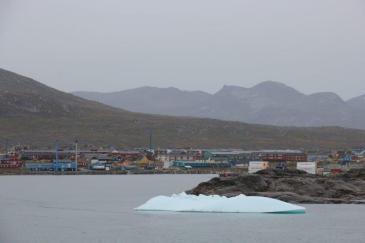 We walked over to the church because there is a cache hidden in the rocks nearby.  We looked all over the place among the boulders but could not find it.  Rats.  The church, as you would expect from a Scandinavian settlement, is Lutheran.  A member of the congregation was lighting the candles at the altar and in the chandeliers for the 10 am service.  The minister was there as well and I asked him when the church had been built.  He looked puzzled and I realized he did not understand English.  He looked at his watch then held up his finger in a ‘wait a moment’ gesture before hurrying down the aisle.  He returned in a couple of minutes with a lady who could translate.  Next year will be the 100th anniversary of the congregation. 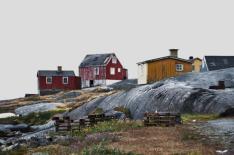 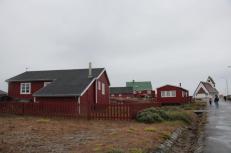 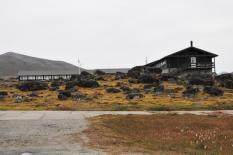 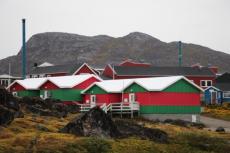 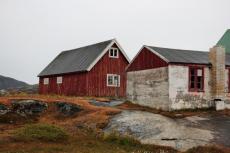 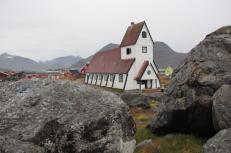 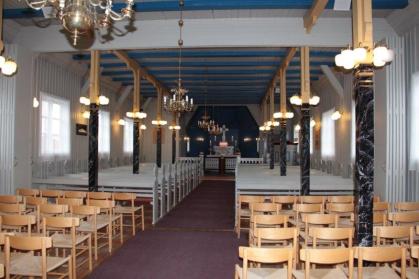 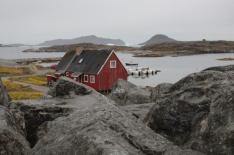 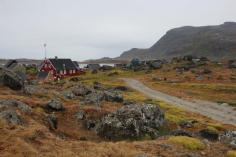 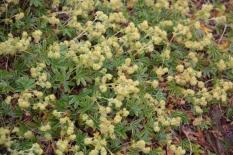 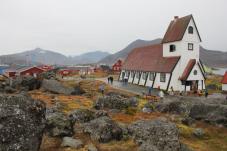 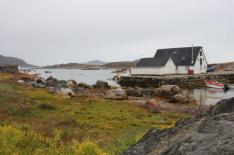 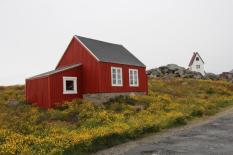 After our disappointing search for the cache we walked back through town and almost to the end of the community before heading back to the middle and the tender.  We made a quick stop in the very busy and crowded gift shop where I managed not to buy anything as usual.  There were some very nice seal skin handbags and slippers though.  We caught the 11am tender, warmed up our chilly damp feet in the cabin and went for lunch in the Lido.

The last tender from shore to ship was 12:30 and by 1 pm we were on our way.  We will be at sea all day tomorrow and the captain plans to dock at St. John’s, Newfoundland at noon on Tuesday. 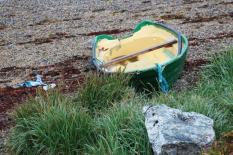 There was an absolutely massive iceberg on the outskirts of the bay during sail-away.  John thinks the peak must be over 100′ high. 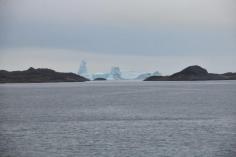 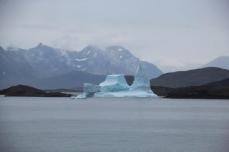