Today is Sunday, normally the first work day of the week for Joseph, but today was declared a holiday last week to celebrate the prophet Mohammed’s birthday.  We took a short drive up past the Muscat International Airport to Sahwa Park.

The park is 300,000 square meters in size, has a running track, a large playground for the kiddies, gazebos, six sunken Islamic Gardens, and hundreds of large palms you can spread a blanket under for a shady picnic.  It is a very popular place with the locals and expats on a day off. There were familiy groups all over the place playing games with their kids, having lunch and just strolling the pathways. The whole place is beautifully manicured and all the hedgerows and trees are clipped and shaped.  There are lovely geometric patterns and shapes all over the place.

From the parking lot you can see the Sahwa Clocktower.  It is in the middle of a round-about so it is hard to get a nice photos but it is very large and there are really nice mosaic scenes around the four sides of the base.

I liked the sign at the entrance.  Take note of item number 9.  Strange that they feel the need to spell that one out I think, but hey, who knows what some people may think is appropriate for their children to play with. 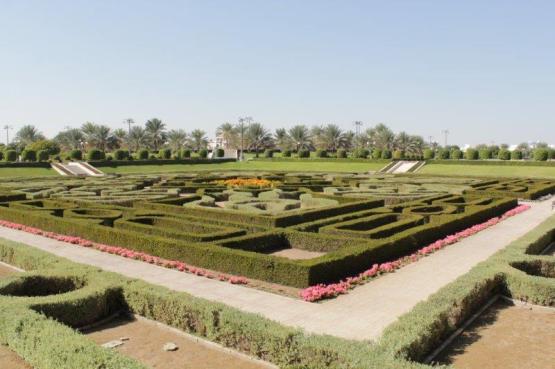 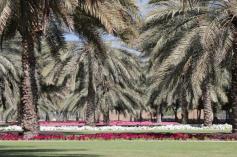 We meandered along the paths and John, Carrie and I had a great time taking photographs.  Joseph, who is a non-photographer, suffered our stops and starts with relatively good humor. 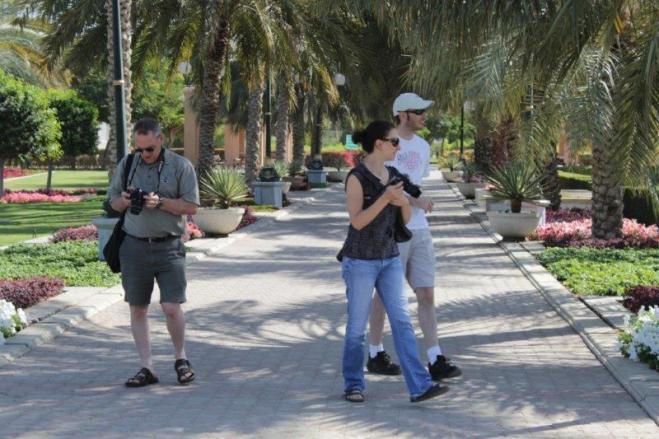 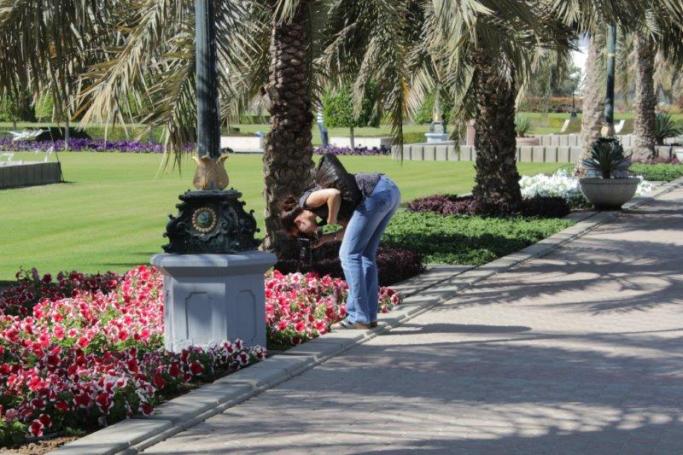 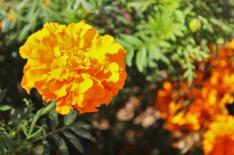 He did take a break and sat in the shade on one of these benches for awhile though. 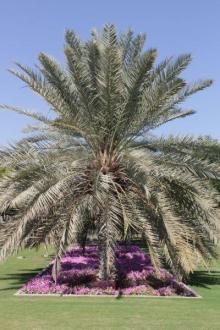 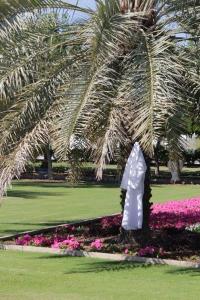 This young dad hung his dishdasha on a palm tree while he played  soccer with his sons. 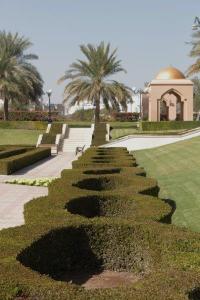 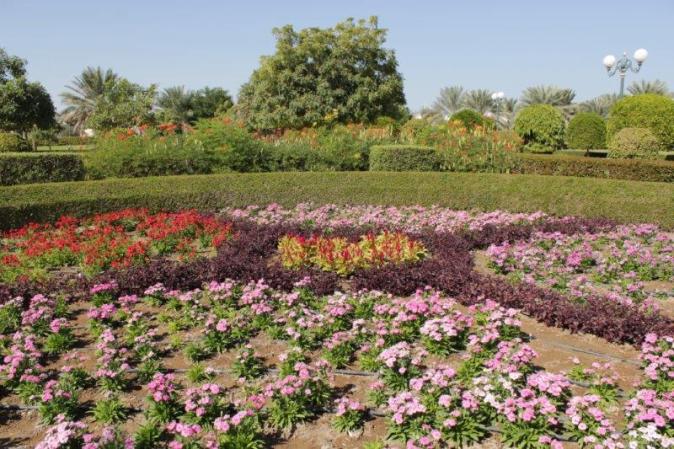 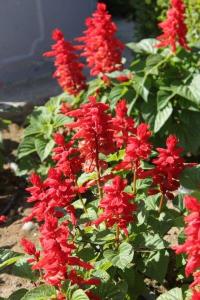 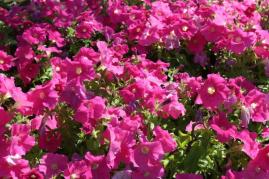 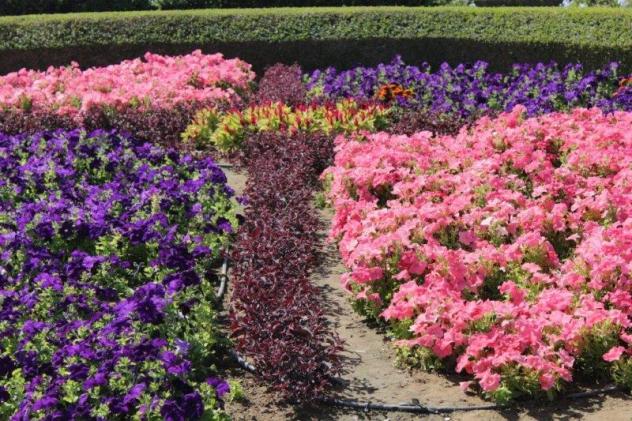 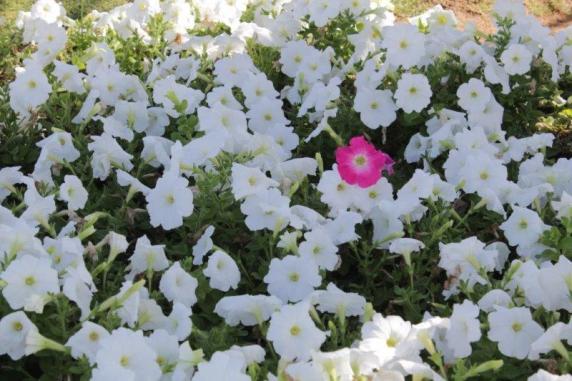 Joseph is like me in that he does not like to have his photo taken. This is something Carrie likes to tease him about and will stick the camera right into his face just to annoy him. 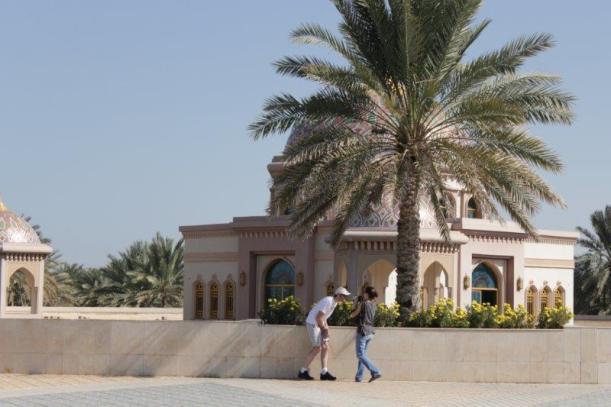 In the center of the garden is a  beautiful small mosque in the middle of a large pond.  You can see the heads of fountains in the pool but they were not working today. 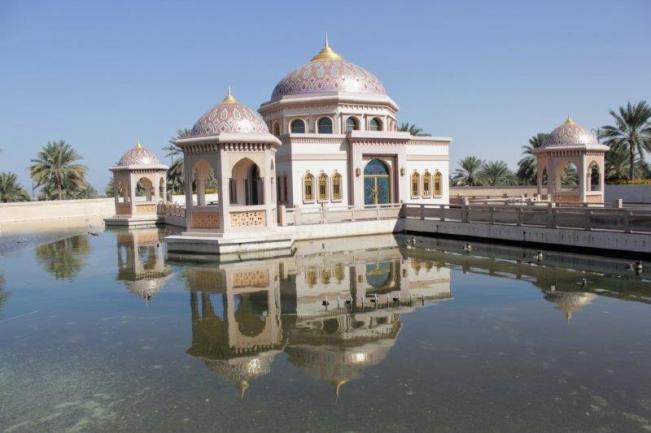 The paving stones all the way around the mosque are grey, red and yellow in a symmetrical sunburst-type pattern.  I loved the lines and uniformity; my OCD side appreciates it (or as we say in my house, “My CDO,” because the letters are in alphabetical order like they should be). 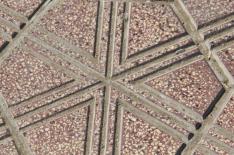 We stopped in the shade beside the mosque for awhile to enjoy the scene and the breeze before we wandered back to the car and the villa. 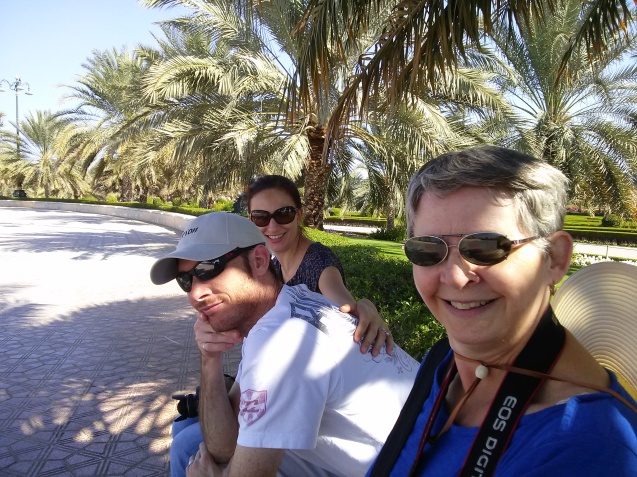 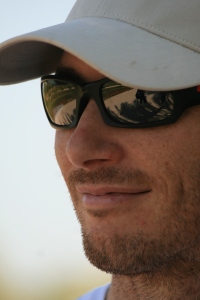 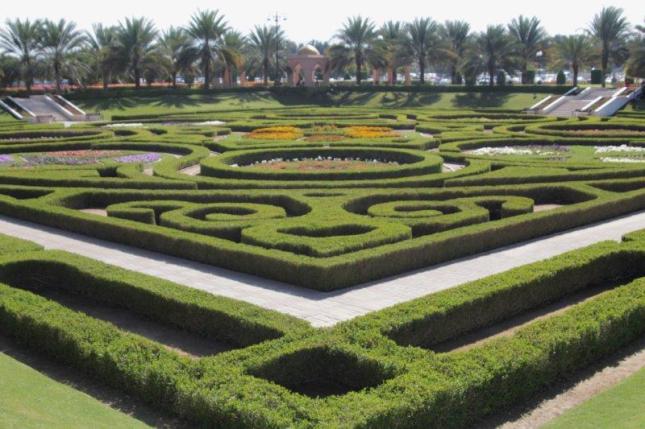 A nap for Carrie, some work for Joseph, my blog for me, puzzles for John and a game were our plans after lunch.  Carrie had purchased a slow-cooker the other day and had put all the ingredients for a beef stew into it before we left; yea for dinner.  And Joseph made us all ham and cheese omelets for breakfast too!  We are doing well at this ‘hotel.’