We are on the way home, mostly via Highway 2 in the US.  Tourist season is over and our route is one less travelled.  I suspect there will not be too many exciting things to write about over the next week or so.  But, we are quite good at finding things to see, especially waterfalls or cliffs or the like.

Today though was pretty much a drive through farm land and small towns from point A to point B.  Southern Ontario and this part of Michigan have acres and acres of sweet corn and silage corn, soya beans, tobacco and many wineries.  We passed a five acre pumpkin field and many farmyards and fruit stands with pumpkins for sale.  There are huge dairies around here too. And quite a few very large mansions, old and new. 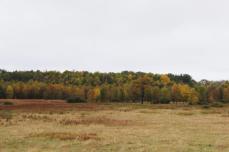 Not far out of Port Huron we found an access to the beach and I, despite the cloudy sky, brisk wind, and frothing waves, stood in my fourth Great Lake – Huron.  One to more to go. 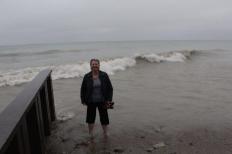 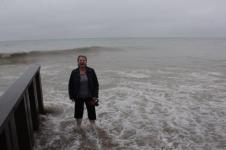 We travelled along Route 25 north and then west around ‘the Thumb.’  If you look at a map of the state of Michigan it is comprised of two parts linked by “Mighty Mac,” the five mile long bridge between St. Ignace and Mackinaw City.  The Upper Peninnsula, referred to as U.P. is bordered by Lake Superior to the north and Lake Michigan to the south.  The larger, southern peninnsula (bordered by Lake Huron on the east and Lake Michigan on the west) is called “The Mitten” because it looks like one – a left handed one at that. (Although, John – pill that he is – says you could just be looking at the palm of a right-hand mitten.  I informed him that his opinion in this matter is irrelevant).  Port Huron sits across from Sarnia, Ontairo at the base of the thumb. The large cities of Detroit/Windsor sit further south about half-way to the state’s southern border ‘wrist’ about where the thumb joins the hand. 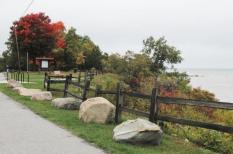 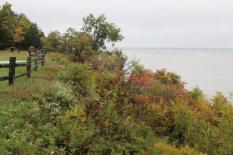 Since yesterday was a long driving day, and the next two will be also, it worked out well that today was shorter.  We only drove 280 km and arrived at Midland, MI at 3:25 and that was after a lunch stop at a little local diner in Port Austin.  We’ll see what we see tomorrow.

Driving between corridors of corn.