OK everybody we did stuff today.  We drove all the way from Niagara Falls to Niagara-on-the-Lake; a distance of 45 kilometers (which includes driving into parking lots and out again).

We were again blessed with a lovely sunny, warm, top-down day. Our first stop was unplanned but too tempting to pass up – The Niagara Botanical Garden and School of Horticulture.  I know it is late in the season and most of the flower displays will be done, but you know me and gardens….just had to go check it out. 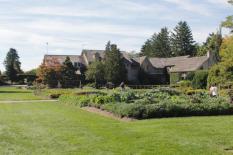 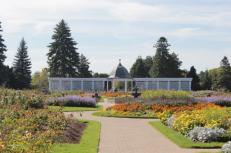 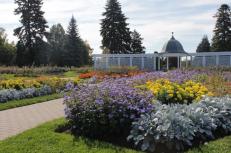 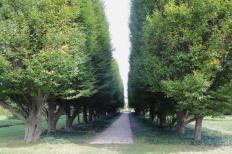 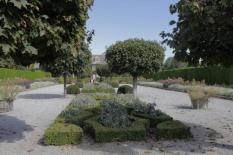 A couple of kilometers up the road is the Floral Clock, a 40′ wide working clock owned, designed each year, planted and maintained by Ontario Hydro at their big generating station on the Niagara River.  Between 15,000 and 20,000 close plantings are used every year to make the design.  The clock rings the Westminster (Big Ben) tones every quarter hour.  This year the design commemorates the 200th anniversary of the end of the War of 1812; in 1814.  Don’t ask me why it is called a war of a single year when it lasted for two.  Ask the historians.

Another kilometer up the road is Queenston Heights Battleground and the Brock Monument.  Queenston Heights is the site of the last major battle of the War of 1812 (on October 13, 1812) when 600 American troops crossed the river from Fort Niagara and attacked the British at Queenston.  The British were seriously outnumbered and outgunned and the Americans took possession of Queenston Heights.  Reinforcements arrived from Fort George and the Americans were driven back to the edge of the 300′ gorge where some jumped to their death rather than be taken prisoner and 958 surrendered (I don’t understand this math either, but I will assume that additonal American troops arrived after the first 600 attacked).  This was a major battle between Canada and the US and ended the offensive of the Americans.

General Brock was wounded in the initial battle and died.  In 1856 his body was removed from it’s resting place in Newark (now Niagara-on-the-Lake) and placed in a vault under the monument.  It took three years to build (1853-1856), is 56 meters (184′) tall and constructed entirely of cut stone. There are 235 steps round and round inside the tower and you can climb to the top.  Which, of course, we did.  There is only room for about three people on the platform at the top and heavy grills on all the windows but the view of the Niagara escarpment and surrounding countryside was pretty great. 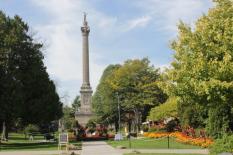 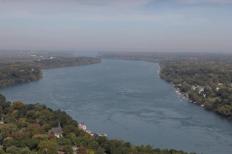 Just outside the town proper of Niagara-on-the-Lake we stopped at the homestead of Laura Secord, but did not go on a tour of the house. (There is a monument to her at the Queenston Heights Battle site). We drove by the Mackenzie Printery where rebel editor William Lyon Mackenzie printed his broadsheets and papers.  And on the next street we located the marker commemorating the death of General Brock’s horse “Alfred” who was left behind when Brock led the foot charge in which he was fatally wounded.  “Alfred” was later ridden into the battle by Colonel MacDonell.  MacDonnell was killed and “Alfred” was mortally wounded. 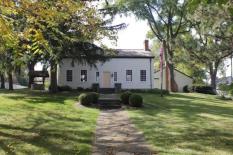 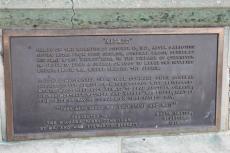 The next, and final stop of the short drive today, was Fort George.  The Fort was built between 1796 and 1799 by the British as a counterpoint to the American Fort Niagara across the river.  Repeated artillery duels between Fort George and Fort Niagara in the fall of 1812 damaged the defenses on both sides of the river and in May 1813 a massive bombardment by American artillery pounded the fort into a smoking ruin leaving the powder magazine as the only building to survive.  Two days later the Americans invaded forcing the outnumbered British to withdraw.  The Amerians re-fortified the site and for the next seven months Fort George and the town of Niagara were enemy occupied territory. 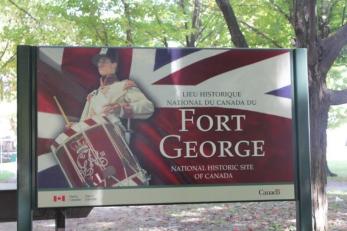 In December the Americans abandoned Fort George and retreated to Fort Niagara but before they left they burned the thriving town of Niagara to the ground, driving the inhabitants out into a fierce winter storm  The British re-occupied the fort, attacked and captured Fort Niagara and took firm control of the Niagara frontier.

Parks Canada built a replica of the fort on the original site and staff in period costume tell the story of the soldier’s lives at the fort. 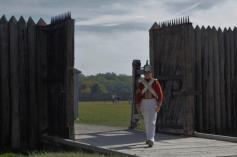 A junior officers shared quarters.  This bed folds up into a box for transport. 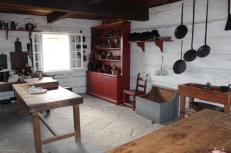 Senior Officers Quarters although they would have actually lived in a residence in the town and not in the fort. 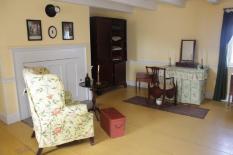 The powder magazine. The only original building. Built in 1796.

Fort Niagara on the American side of the Niagara River.

Then it was a very slow drive through the heavily congested streets of the popular tourist town of Niagara-on-the-Lake. We managed to find a parking place near the Queen Victoria Park so I could walk to the edge of  Lake Ontario and stand in the water.  You may remember that way back on July 2 I stood in the water of Lake Superior, so this is my second Great Lake.  I hope to stand in the other three over the next few days. 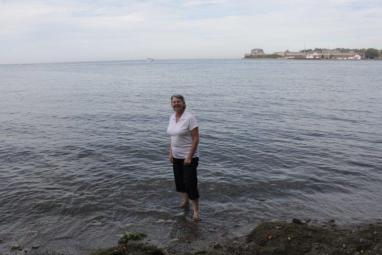 We are comfortably ensconsed in our King Jacuzzi Suite at the Hilton Garden Inn near the airport.  Every hotel in town or anywhere near town was $180-$350 plus per night.  We have our King Jacuzzi Suite for $149.  I won’t be using the tub though.  I find they take too long to fill and consider it a waste of time and water.  But that’s just me….no romance in my soul. 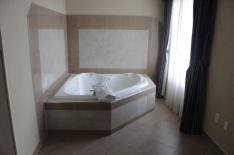 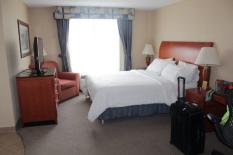