We woke this morning to fog.  It lifted after awhile and we continued through the colourful forests of New Hampshire and across the border to Vermont. 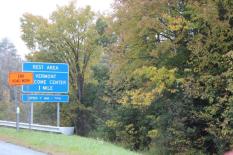 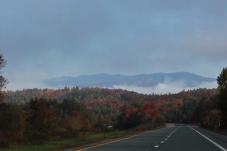 We came across many more of the long, extended houses plus so many, of what to us, are typical New England brick buildings.  A New England town is clearly recognizable from all the photos we have seen over the years. 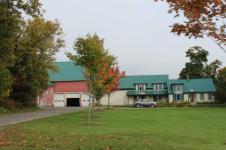 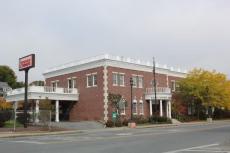 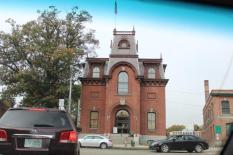 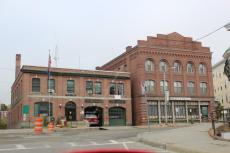 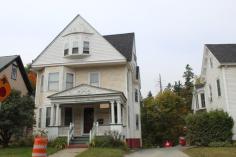 And, due to the age of so many of the buildings around here, we also saw quite a few abandoned, derelict ones; houses, sheds, barns.  I find them quite stately though, even in their neglect. 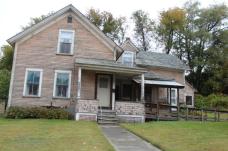 In Vermont we turned south since we must get below the slash of  Lake Ontario to go west to Niagara Falls.  It didn’t take long either before we noticed that a lot of the lovely rich reds and oranges of the trees in New Hampshire were disappearing in favor of yellows and golden green.  The leaves are just not as far along in their seasonal change as those just a bit further north.

We drove over half way down Vermont on a westerly slant and just before the New York border we drove through New Haven and got a lovely taste of color again.

Not far into New York we stopped at a light and an Amish horse and carriage went through the intersection.

I know the Amish do not like to have their photo taken so I waited until the driver was no longer visible before I took this shot.

For the majority of our drive south in New York we paralleled the Champlain Canal.  We passed signs for at least 9 locks.  The Champlain Canal extends 60 miles from Lake Champlain near the Quebec border to the Hudson River in New York City.  The canal was constructed simultaneously with the Erie Canal and was used by commercial traffic from 1823 to 1970.  Today it is primarily used by recreational boaters.  Not far past the end of the canal I saw some beautiful reflections in the quiet water before a low waterfall. 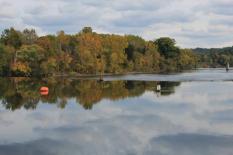 Our destination; Saratoga Springs.  I was quite excited to be going to one of the most famous horse racing towns in the USA.  My mother and I watched the Triple Crown of horse races every spring (the Kentucky Derby, the Preakness, and the Belmont Stakes) and I have loved horses my whole life.  I knew the racing season would be over but I was hoping to see the tra

ck.  We drove by the grounds and found the place to be completely fenced (for security and protection of the horses, I am sure) with guards at the gates.  It is a huge complex with white grandstands covered with a red roof. and a perfectly groomed track.  Still, I was stoked to see it – even without the horses.

Saratoga Springs, like Bar Harbor, is a major tourist destination.  The mineral springs here have been visited by people for over 200 years.  The area is quite affluent. There are lots of hotels, restaurants and spas.  We went into town for dinner and the streets were lined with cars and the sidewalks bustling with people.  It must be an absolute crush during race season.  I don’t like crowds much anymore but I would love to be here on a race day in June!