Today we reached the top of the Northern Peninsula of Newfoundland.  As we drove along it was interesting to see the coastline of Labrador across the water.  The Strait of Belle Isle that separates the Northern Peninsula from the south coast of the border between Quebec and Labrador is only 9 miles across at some points.  So on a beautiful sunny day like today it was easy to see.

But…before we got here, we had to leave there.  And before we left there – Port aux Choix – we had to check out the National Historic Site.  What makes Port aux Choix historically significant is a relatively recent archaeological find.

In 1967 a fellow was excavating a basement for a movie theater and discovered human bones.  Turned out he had found an ancient hunter-gatherer cemetery.  Further investigations in this area have located the remains of 4 distinctly separate peoples dating back 5000 years.  We spent an hour in the interpretive center looking at all the artifacts and reading the info.  These sites revealed a great deal to archaeologists about the early peoples who came to this area.

Not too much out here 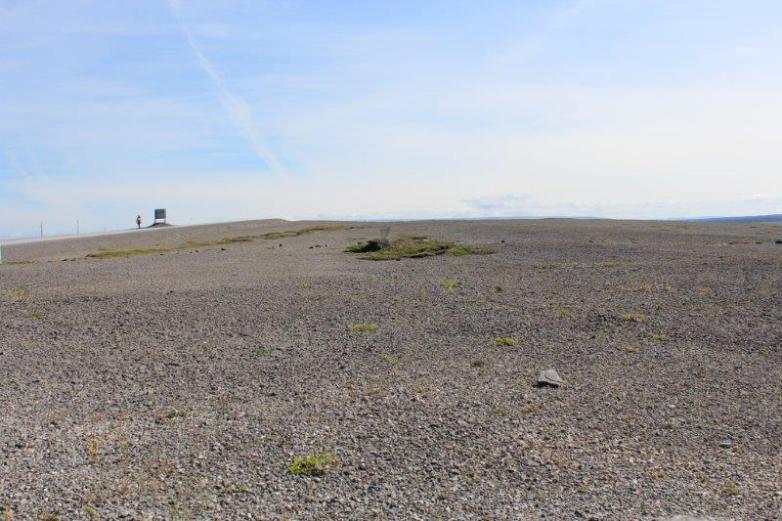 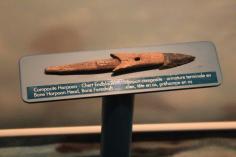 And that is all of the ancient peoples information I am going to share.  Except one thing – although nomadic, the Dorset Palaeoeskimos lived here longer than just a singe season and it has been determined that they used the rib bones of whales to form the frames of their winter dwellings.  An interesting bit of trivia. 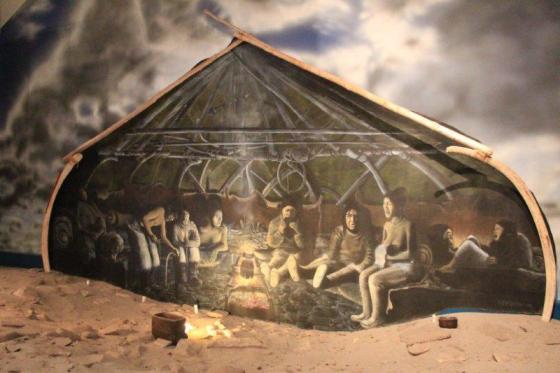 We took a little drive around the town and took some photos of the lovely local scenery. 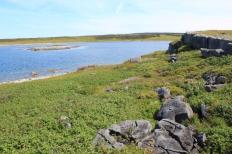 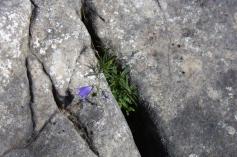 Then John followed the “Car Wash Today” signs to a house several streets off the main road and arranged for Poppy to have a bath.  She was dirty from all the rain we have experienced since we arrived on the island.  I’m sure she feels much better.  I know John does.  And the fellow who had the car wash business was thrilled to have her in his garage.  He had seen us drive into town yesterday and actually followed us around to check out the truck.  (We get that a lot.  And requests for photos)

After Poppy’s bath we left town – at 1 pm and drove up Highway 430 to St. Anthony 193 km away.  We only stopped at one place along the way and that was Flower’s Cove where they have Thrombolites.  What are Thrombolites you ask?  They are ‘Living Rocks’ with an explanation much too long and complex for me to share so I will just put in the photo of the sign and you can read it for yourself if you care.  I think the bun-like shapes of these large mounds are neat. 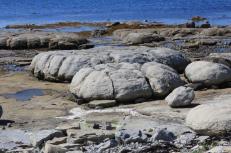 We arrived at our hotel in St. Anthony at 5.   In our room was a handout about three short hiking trails located at the far end of town that run along both sides of the lighthouse spit; and a longer ‘strenuous’ hike that is actually a climb up 476 steps to the top of the hill where the radio tower is located.  Guess which one we did?

You got it.  Right up the stairs to the top.  Lovely, lovely panoramic views.

Can you find her now? 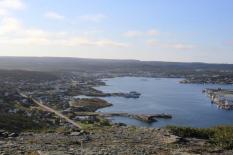 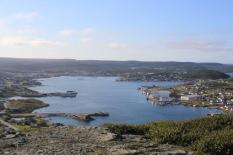 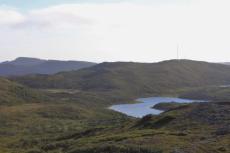 We even saw a couple of icebergs.  They were way off on the horizon but glistening white in the sunshine.  These photos are REALLY cropped to show you, hence the grainy pics.

We wandered around up there for awhile taking photos in all directions and then made our way back down the 476 steps to the bottom.

We were walking along on our way to the parking lot and I caught movement in the brush to my right.  I thought maybe it was a weasel, but it looked too big.  Then I thought it was just a cat.  But no it was a fox and it came out of the brush right in front of me and hopped down the trail, climbed onto a sunny rock and lay down for a nap.  It didn’t care about us all at all. I told John it only had three legs.  He thought it was just injured and holding one leg up, but when it came off the rock and passed by us again it was clear to see it was missing the right front leg.  Poor little thing.  I was an old injury because it looked totally healed.  I guess it has managed to catch food as it wasn’t emaciated. 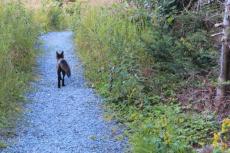 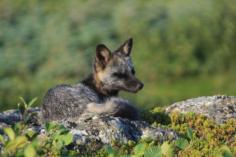 See the fox on the rock on the right.  That is how close we were to it. 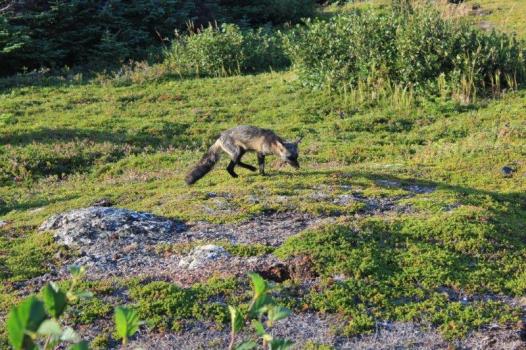