We had only one thing to do today and that was to board the ferry for Newfoundland.  Our ferry left North Sydney (about 30 km from our hotel in Sydney) at 11:45 this morning.  We had to be checked in at the terminal by 9:30 so we had to get up at 7:30  to have time to shower, dress, breakfast and drive to the terminal.  First morning in quite awhile we have had a schedule!

The crossing generally takes 6 hours.  Sometimes the ocean slows things down quite a bit.  We had windy conditions and quite a lot of rocking of the boat but no where near the worst conditions we have had on a ship.

We sailed on the Marine Atlantic ferry “Blue Puttees”  which was named for the WWI servicemen from Newfoundland. (They were a British colony at the time and not part of Canada.  Newfoundland did not join Canada until 3 years after the Second World War in 1949).  The British army uniform was khaki with green socks.  Newfoundland had no green wool so the soldiers all wore blue socks.  They were teased goodnaturedly about their blue socks and when they told the other units they were blue puttees, the name became synonymous with Newfoundland Soldiers and Marine Atlantic named the ferry in their honor.

Part way across the  Gulf of St. Lawrence the wind was accompanied by rain and it rained all the way to Channel-Port aux Basque.  Newfoundland has been experiencing a heat wave of late – days of 30-33 C (very much above normal for this area) so they badly need rain.  For them we are pleased (I wish BC would get some too to help with the forest fire situation at home), but for us, we want some non-rain days especially when we do our boat tour in Gros Morne National Park.  I really want to see those 2000′ cliffs from the water. 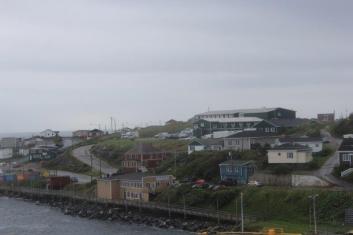 Our hotel is the green building on the hilltop

We are settled in our hotel, have been fed and watered and will be retiring for the night very shortly.  You have just received one of the shortest blogs I have written on this entire trip!