Another new province today, La Belle Provence; Quebec.  Our drive from Ottawa on Highway 148 took us parallel to the Ottawa River as far as a small town called Clarence.  At Clarence we drove right on to a little ferry – it held about 6 cars – and were taken across the river in 10 minutes ($9.00 for the car and passengers) to Thurso, QC.

Our destination was Berthierville, a small town west of Trois-Rivieres.  We totally avoided Montreal and its vast number of suburbs and drove through some flourishing farm land planted in many different types of vegetables; corn, cabbages, carrots, etc. 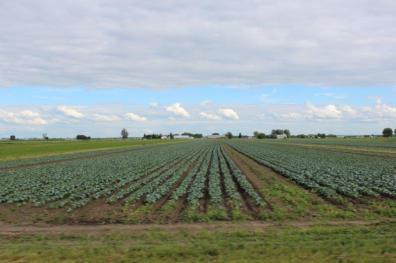 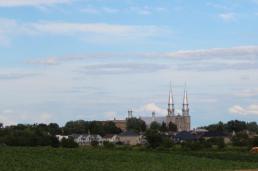 Today was a French-Canadian history day.  Both stops we made were to homes of prominent French-Canadian political figures.  First was located at the town of Montebello: Manoir Papineau built in 1850 by Louis-Joseph Papineau.  Papineau was a Patriot (loyal to France) politician and man of culture in the 19th century.  The large manor house was built alongside the Ottawa River; “the most beautiful river in the world” according to Louis-Joseph.  At the time he owned 600 sq km of land with over 3000 residents making a living on the land and paying him rent.  He was charged with treason and had to flee but returned after the British granted pardons to all the Patriots 7 years later.

As we wandered the grounds checking out the various outbuildings we discovered The Chateau Montebello: a Fairmont hotel.  The Chateau was built by a consortium of prominent business men after the fourth generation Papineau sold the land.  It was a VERY exclusive private club.  The Chateau was built of 3000 BC logs in 3 months by 3000 workers.  The Fairmont actually also owns the manor house and all of its land and original furnishings, but since it is such an important historical building Parks Canada administers the house and pays for all the restoration and upkeep.  Average cost for a room at the Chateau in the summer is $350 per night.  Many guests or visitors arrive by boat and there is a nice marina 5 minutes walk from the hotel buildings. 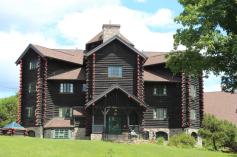 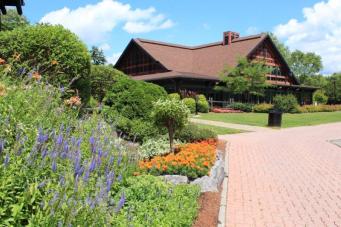 Our second stop was much shorter.  We spent 25 minutes in Saint-Lin-Laurentide and visited the family home of Canada’s first French-Canadian Prime Minister Sir Wilfred Laurier.  His father was a surveyor and farmer so had a reasonable income and the house is a sturdy brick one with four rooms downstairs and two up.

Now that is a well used washboard.

We arrived in Bethierville at 6 pm.  My biggest concern about being in French-speaking Canada was the menus.  Road and other signs are all in French but have international symbols on them so are easy to understand.  Hotel and tourism staff all need to speak both languages, but menus are local and I expected them to be in French.  However as soon as I told the fellow at the the restaurant we were “l’anglais” he reached for the English menus.  Our server as well spoke fluent English.  “Would that we could speak French as well.”  I did spend the time  while we waited for our food translating the dessert menu that also had trivia questions about the restaurant chain on the back.  Did quite well too.  But don’t ask me to speak it!  “Je ne comprendez francais.”