A sunny day, a short day, a good day.  We didn’t drive far after we checked out of our studio at Blue Mountains.  We didn’t do anything at all yesterday either in case you are thinking you have missed a day. There is no blog or Flickr photos for Day 21.  It was totally a stay-in, be-lazy day.

Today we only drove about 3 hours from Blue Mountains to Peterborough.  Once again the area we traveled through was mostly farm land.  We even drove up and down a couple of hills. And based on Ontario’s standards one of them would have been a good ski hill too!

The only thing we went to see today was the Lift Lock.  It took eight years to construct and opened July 9, 1904.  There was an upgrade to hydraulics in the 60’s and some additional tweaking a few years later but the initial design and mechanics are  still working just fine from the early 20th century.  Boaters pay by the foot to use the lock – $5.60 per foot of boat length.  You can buy a season’s pass, a month pass, or a day pass.

You actually drive through the lock to get to the viewing area and visitor’s center. The boats are lifted 65′  – making this the tallest lift lock in the world. There are 6 km of man made canal leading up to the lock.  The Peterborough Lift Lock is part of the Trent-Severn Waterway; a 386 km long system of lakes and locks running from Lake Ontario to Georgian Bay.

When we were in Scotland last year we took a boat ride on the lift lock in Falkirk.  It is called the Falkirk Wheel and the two locks rotate rather than go up and down side-by-side as they do in Peterborough.  It was very interesting to be able to compare the two types.  We chatted quite awhile with the young man that opens the lock gates at the bottom for the boats to exit.  While we were there two boats came down in the one lock and half an hour later one boat came down in the other lock.  Needless to say John, who loves all things mechanical, enjoyed himself immensely. 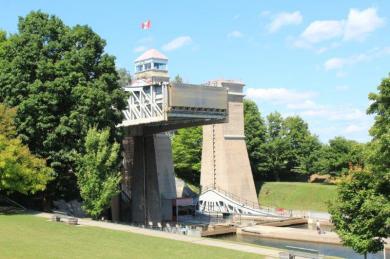 Near lock comes down as the far lock goes up. 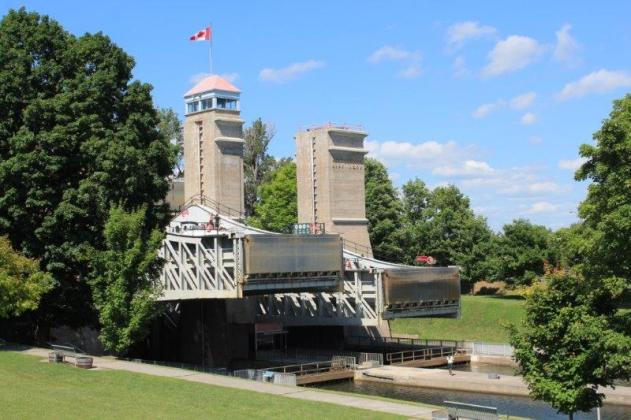 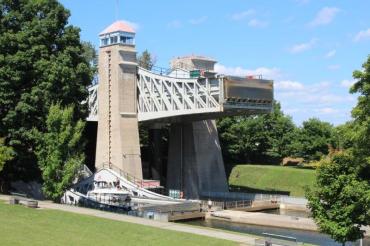 When the near lock is at the bottom, the boat sails out and the far lock is now at the top to load another boat.

And, that my friends, is the sum total of our excursions today.

Oh, I forgot one thing.  While we were chatting with the fellow at the lock we were visited by a very special fellow – my new friend Parka.