Today was a seafaring day.  All three of our stops were related to the ‘sea’.

John was wakened at 6 am by torrential rain, but by the time I woke at 8 it was done and only the heavy clouds were left.  I was a bit dismayed because we are now driving the north coast of Nova Scotia which is along the Bay of Fundy (and its inlets and bays) and home to the highest tides in the world.  The cliffs and shoreline are supposed to be very scenic and dramatic and I didn’t want the sky to be cloudy all day.

What saved us from getting to the tidal lookout we were to stop at as early as we would have – and while the skies were still grey – was a stop in Maitland at the home of ship builder/designer W.D. Lawrence.

This strip of Nova Scotia shore was strewn with ship building firms and the company owner’s houses.  It was referred to in the late 1800’s as Millionaires Row.  Mr. Lawrence’s house was three stories with about 18 rooms.  Three generations of his family lived in the house until 1969 when the grand-daughter gifted it to the Provincial Museum Society with all of its contents (about 80% of the original furnishings) so that it would always stay “Grandma’s house.”

Mr. Lawrence designed and built the largest wooden full-rigged (three mast) sailing vessel ever made in Canada.  He named it after himself, the “W.D. Lawrence”.  It was 262′ long, 48′ wide, 29′ high and weighed 2459 tons.  On its maiden voyage it did a 2 1/2 year trip around the world.  Mr. Lawrence went on the trip and while the ship was being loaded and unloaded at various ports he went exploring in the area and brought back many interesting things.  He had been scoffed at while the ship was being built; people said it would never sail, it was too big and the construction would bankrupt him – but it was a very profitable vessel for his company.  It transported lumber, coal and guano (bird droppings) from Chile to Europe.  Once the ship left Nova Scotia it never returned there while Mr. Lawrence owned it.  He sold it about 8 years later to a Norwegian firm who removed the masts and sails and used it as a coal barge.  It sank in high seas a couple of years later.

Note the long covered walkway to the ‘little house’ at the end.  This was the indoor access to the four seat divided outhouse.  Despite putting in central heating and electricity, there was never indoor plumbing installed in the house.

All the pattern on the furniture was hand painted – even the wood grain. 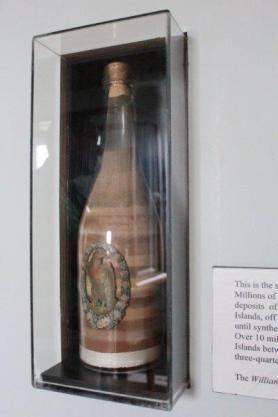 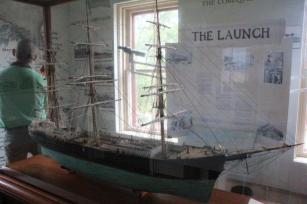 We had a lovely lady named Elizabeth as our guide.  We were the only people in the house at the time and she loved to talk (almost as much as I do – hard to believe I know but true nonetheless) and tell stories so we were there for over two hours.  We had a great time.  And by the time we left at 2 o’clock the sky was blue and it was a top-down day the rest of the day. Thank you Elizabeth and Lawrence House.

Bruncoat Head is a small jut of land in the Copequid Bay at the end of the Minas Basin of the Bay of Fundy.  The highest tide every recorded in the world occurred here at 16 meters (50′).  Due to our lengthy visit at Lawrence House it was low tide by the time we got there and we had wandered the pathway to the stairs to the shore.  It was interesting to note that the last flight of stairs was hinged so it could move with the water.  There were lots of people wandering around on the flats.  We stay up on the rocks where our shoes did not get sucked in to the mud and we did not risk falling on the slippery shore. 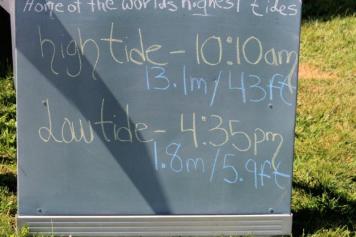 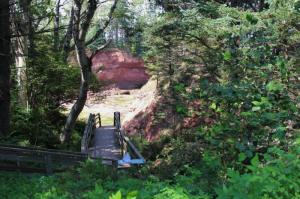 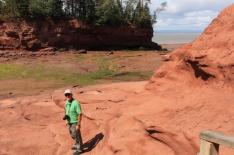 Note how high the cliff has been eroded by the tides.

This island was once part of the mainland and had a lighthouse. 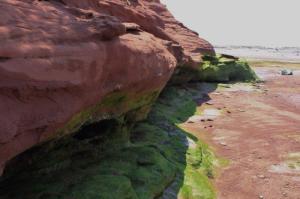 As I have mentioned before, when the British defeated the French in 1751 and the Acadian settlers (many of whom had fought with the French in battles against the British during the Seven Years War) refused to swear oath to the King they were expelled from the now-all-British Colony.  All their possessions and land were seized and they were rounded up and shipped back to France (even though most of them had been born in the colony and never set foot in France) or to the American States.  Over 1/2 of them died from disease or shipwreck.   It was a very tragic event in the history of Canada.

The American Poet Henry Wadsworth Longfellow wrote a poem about the event called “Evangeline,” a woman torn from her family and lover during the expulsion.  (How many of you remember it from English Lit?)

The popularity of this poem placed a great deal of focus on the story if the Acadia and this public interest was a prime motivator in the creation of Grand Prè National Park.  It is located on the lands that the Acadian farmers had dyked to create exceptional farmland from the salt marsh created by the area’s high tides and where most of the people were interred until they were shipped off.

At Grand Prè there is a statue of Evangeline that ‘ages’ as you walk around it clockwise.  And it does. The woman looks very youthful from one side and as you move around her face gains maturity.  We were unable to go through the Interpretive Center since it was 5 pm and they were closing up, but we wandered the lovely gardens for awhile before digging Stella (our GPS) out of the console and asking her to direct us to our hotel: Old Orchard Resort and Spa; located in the middle of who-knows-where just outside of Wolfville. 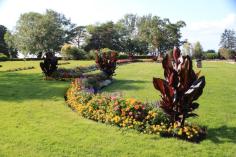